The Major Data Storylines From the 2022 Allsvenskan | The Analyst 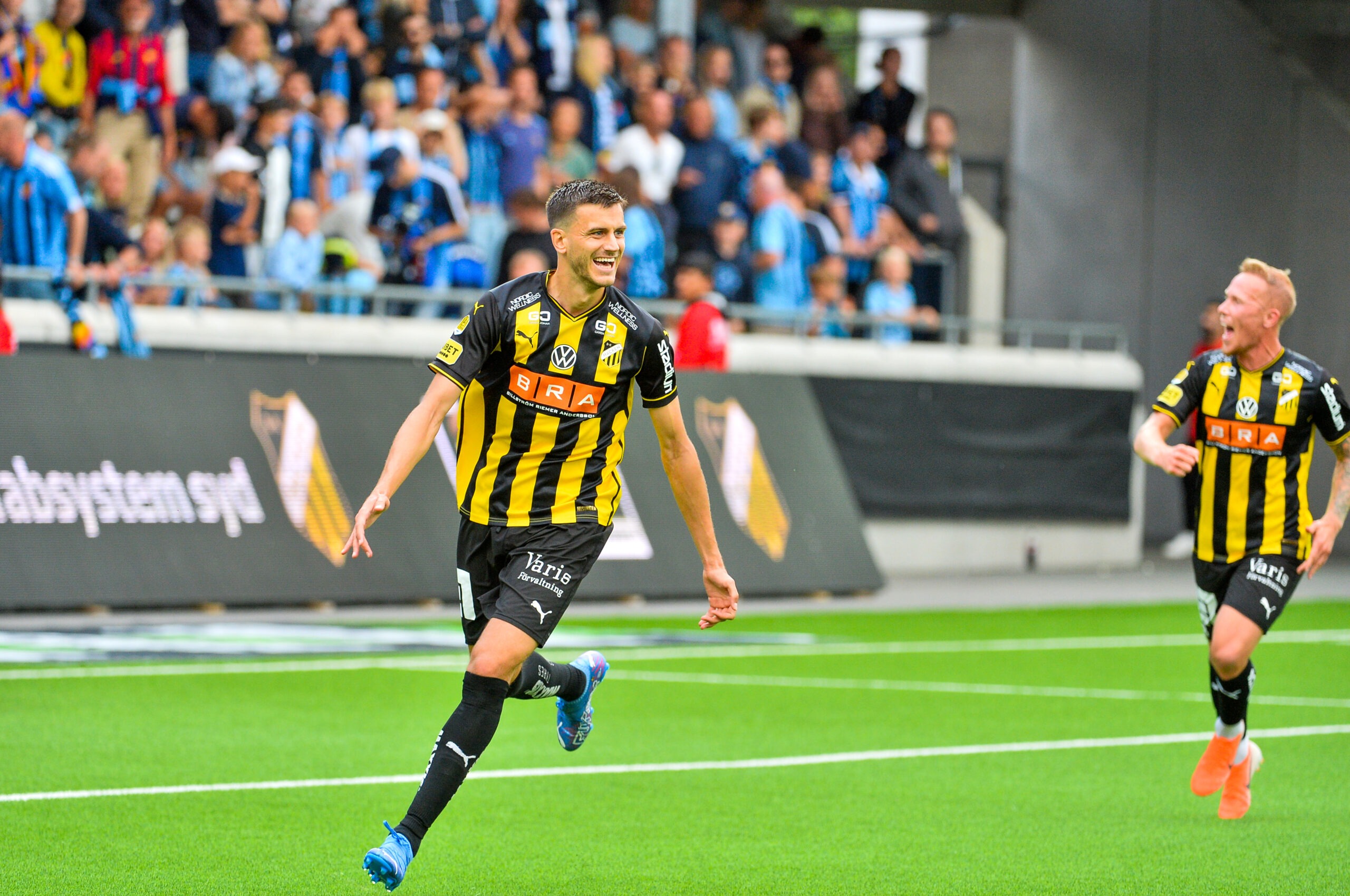 The Major Data Storylines From the 2022 Allsvenskan

The 2022 Allsvenskan season brought us a first: a maiden title for BK Häcken. But what other data storylines did it throw up?

Many feared that the Swedish Allsvenskan would become a one-sided and predictable league when it was being dominated by Malmö FF in recent years, with the Blues winning six of the nine campaigns between 2013 and 2021. However, a disappointing season from Malmö meant that the league title of 2022 was up for grabs. And when the cat’s away, the mice will play. BK Häcken took advantage, winning their first-ever Allsvenskan title in convincing and entertaining fashion.

BK Häcken, a relatively modest club that has only played two games in a European main-stage tournament in its entire history, weren’t even among the biggest title favourites at the beginning of the season. They finished 12th in 2021, winning just nine of their 30 games.

But how different 2022 would be. After 14 games, BK Häcken had already matched those nine wins from the year before and comfortably led the Allsvenskan. It was a lead they would not give up. Häcken lost only two league games in their entire season, while outscoring every other team by netting 69 times.

A big factor in Häcken’s fortunes is Per-Mathias Høgmo, an experienced manager who once won a gold Olympic medal with Norway Women and led the Norwegian men’s national team as well. The first months after his arrival in June 2021 were already promising, but the puzzle pieces really started falling into place when the 2022 edition of the Allsvenskan started. In the end, a golden triangle of players helped Høgmo and Häcken win the league.

Earlier this year on Opta Analyst, the avid reader would’ve seen Häcken striker Alexander Jeremejeff being dubbed ‘The Crown Prince.’ After a promising start to the season, hopes were big that Jeremejeff could help his team win the league.

And so he did. Jeremejeff scored 22 goals, the highest total for an Allsvenskan top scorer since 2014-15, when Lasse Vibe netted 23 times. Not only did he outscore any other player in the league, he was also the player with the most shots on target (46) and expected goals (19.9). No longer a Crown Prince, Alexander Jeremejeff is now the King of the Allsvenskan.

A 30-year-old Dane, a free agent for three months after being released by Polish ŁKS Łódź, and with no experience in Sweden: it’s safe to say that Mikkel Rygaard didn’t have the most appealing of resumes in January 2022. Nevertheless, BK Häcken took a chance, and it paid off big time.

In the 2022 Allsvenskan, there was only one player who created more chances for team-mates than Rygaard’s 71, with 45 of those coming from open play and the other 26 from set-pieces, showing his versatility as a creator.

Goalscorer Jeremejeff and creator Mikkel Rygaard were accompanied by a third musketeer: Samuel Gustafson. After a spell in Italy, Gustafson decided to return to his boyhood club BK Häcken to play together with twin brother Simon who was just released by Eredivisie side FC Utrecht. For all parties involved, it was a pleasant reunion. Gustafson emerged as one of the Allsvenskan’s most dominant playmakers. No player completed as many passes ending in the final third as Gustafson’s 601.

An incredible statistic tells you all you need to know about Gustafson’s importance for BK Häcken: he was involved in 121 build-up sequences from open play that ended in a shot, without being the shooter or assister for that attempt himself. Those 121 involvements are at least 38 more than any other player in the Allsvenskan 2022.

Gustafson scored the winning goal in their championship-winning game against Malmö FF, meaning he could lift the trophy a short while later, as he captained his side in this remarkable title-winning season. Does the title win for BK Häcken signal a shift in power in the Allsvenskan?

On top of the wishlist for any top-flight newcomer is an experienced striker able to your team cope with the jump in level. That’s probably what IFK Värnamo must have thought when they clinched their first-ever promotion to the Swedish Allsvenskan. But no one could have foreseen how their gamble on a 31-year-old former Championship and League One flop would turn into this season’s biggest surprise story.

Marcus Antonsson performed well for Swedish sides Halmstads BK and Kalmar FF before going on a little adventure to the English Football Pyramid, unsatisfyingly representing Leeds United in the Championship (16 games, 1 goal) and doing little better for Blackburn Rovers in League One (31 games, 7 goals). After his loan spell in England ended, the forward returned to Swedish giants Malmö, before quite surprisingly ending up at IFK Värnamo at the start of the 2022 Allsvenskan campaign. Värnamo, who had clinched back-to-back promotions, winning the 2020 Division 1 and 2021 Superettan, had never played in the Swedish top flight before and counted on Antonsson to help them keep them in the competition.

That makes it sound like Antonsson was the only one responsible for that.

Or at least he played a very, very, very big part.

Antonsson scored a whopping 20 goals for the Allsvenskan newcomers, finishing in second place on the Swedish goal scoring charts behind BK Häcken’s Jeremejeff (22 goals), with the forward responsible for 59 % (!) of Värnamo’s 34 total goals in the 2022 campaign.

Antonsson became just the sixth player able to score 20+ goals over the last 15 Allsvenskan seasons, as well as the first one to do so for a promoted side over that period.

So, what’s the 31-year-old’s secret? The fact is that Antonsson’s offensive numbers are simply among the very best in the 2022 Swedish top-flight campaign.

He enjoyed a red-hot season in front of goal, scoring 4.1 more goals than could have been expected based on expected goals (15.9). That overperformance was the second-largest among all players in the 2022 Allsvenskan campaign:

Time will tell if Antonsson’s performances in his debut season for IFK Värnamo were a one-off, or if the Swedish striker can actually sustain those numbers. The “Värnamo one-man army” has proven himself one of the Allsvenskan’s more proficient forwards in recent times, already jumping to fifth place in the competition’s scoring charts over the last 15 seasons.

Nahir Besara and Moustafa Zeidan finished with the most assists in the Allsvenskan 2022. Besara is a well-known playmaker in the Swedish league and a lock for goals and assists – he had already racked up 40 goals and 26 assists in the Allsvenskan prior to the 2022 season. Most of those goal contributions came for his former club Örebro SK, but some came for his current side Hammarby back in 2015.

Besara and Hammarby clinched promotion to the Allsvenskan by winning the Superettan eight years ago, before the Swede left the club in mid-2015. After adventures in Turkey, Örebro, Cyprus and the Gulf states, Besara has returned to familiar ground in Stockholm and with his 11 goals and 10 assists for Hammarby this year, Besara was involved in the second-most goal involvements in the Allsvenskan 2022 campaign.

As a real assist king befits, Nahir Besara created more chances (72) and chances from open play (54) than any other player in the Allsvenskan 2022, while he also attempted the most shots last season, trying his luck 94 times. Overall, Besara was involved in 7.6 unique open play shot-ending sequences per 90 minutes in the Allsvenskan 2022 season, more than any other player who played at least 60 percent of the possible 2700 minutes in the competition.

Although Moustafa Zeidan didn’t make the cut of players to play at least 60% of the possible minutes, the attacking midfielder still managed to provide ten assists and score four goals in 1154 minutes of play in the Allsvenskan 2022 season. That’s a goal involvement once every 111 minutes, the third-best average in the competition among players with more than 10 goals and assists, behind only Jeremejeff (88) and Ibrahim Sadiq (94) and slightly better than Besara, who needed 114 minutes per goal involvement.

Zeidan transferred from IK Sirius to Malmö FF in mid-July, and Malmö won’t regret buying the youngster and Swedish youth international. Despite his relatively limited amount of playing time, Zeidan completed 42 dribbles (eighth in the league) and assisted four Allsvenskan goals following a ball carry this year, more than any other player in the entire 2022 campaign. A trademark Zeidan move is a dribble into the half-spaces and centre of the field, highlighted by his chance-creating carries graphic.

Hammering It Home: Besara and Bojanic Turn on the Style for Cifuentes

After finishing fifth in the 2021 season, Hammarby have secured a third place-spot under new manager Martí Cifuentes, resulting in Europa Conference League football next year, while also reaching the Swedish cup final last summer. The Spanish manager, who joined Hammarby from Danish side AaB last year, is a proponent of ‘juego de posición’ and counter-pressing and has quickly been able to instil his type of football in the team.

Hammarby IF love a bit of possession: in the 2022 Allsvenskan season, only Kalmar FF completed more passes (15,939) than the Stockholm side (14,141). But the biggest statistical evidence of Cifuentes’ philosophy is Hammarby’s ability to pressure their opponents early on. Hammarby recorded the most high turnovers among all teams in the competition (300). Indeed, it is the second-most on record for any Allsvenskan side over a single campaign (data since 2016-17), behind Malmö FF in 2021 (345). It’s a massive difference compared to last season when Hammarby finished just seventh in that ranking with 245 high turnovers.

Arguably, the two most important players for Hammarby IF this season have been midfielders Besara and Darijan Bojanic. Both players have been instrumental in stopping the opposition high up the pitch and converting those transitions into goalmouth action. Of all players in the 2022 Allsvenskan, 31-year-old Besara (31) and 27-year-old Bojanic (30) respectively rank first and second when it comes to possession won in the final third of the pitch.

That early pressure on the opposition by the Hammarby midfield duo has led to plenty of danger: Besara (54) and Bojanic (50) are also the two players to have created the most chances from open play in the Swedish top-flight this season. It is no doubt thanks to these two all-round midfielders that Cifuentes was able to play his favoured style of football and secure European football with Hammarby.