Spain vs. Costa Rica: Prediction and Preview | The Analyst 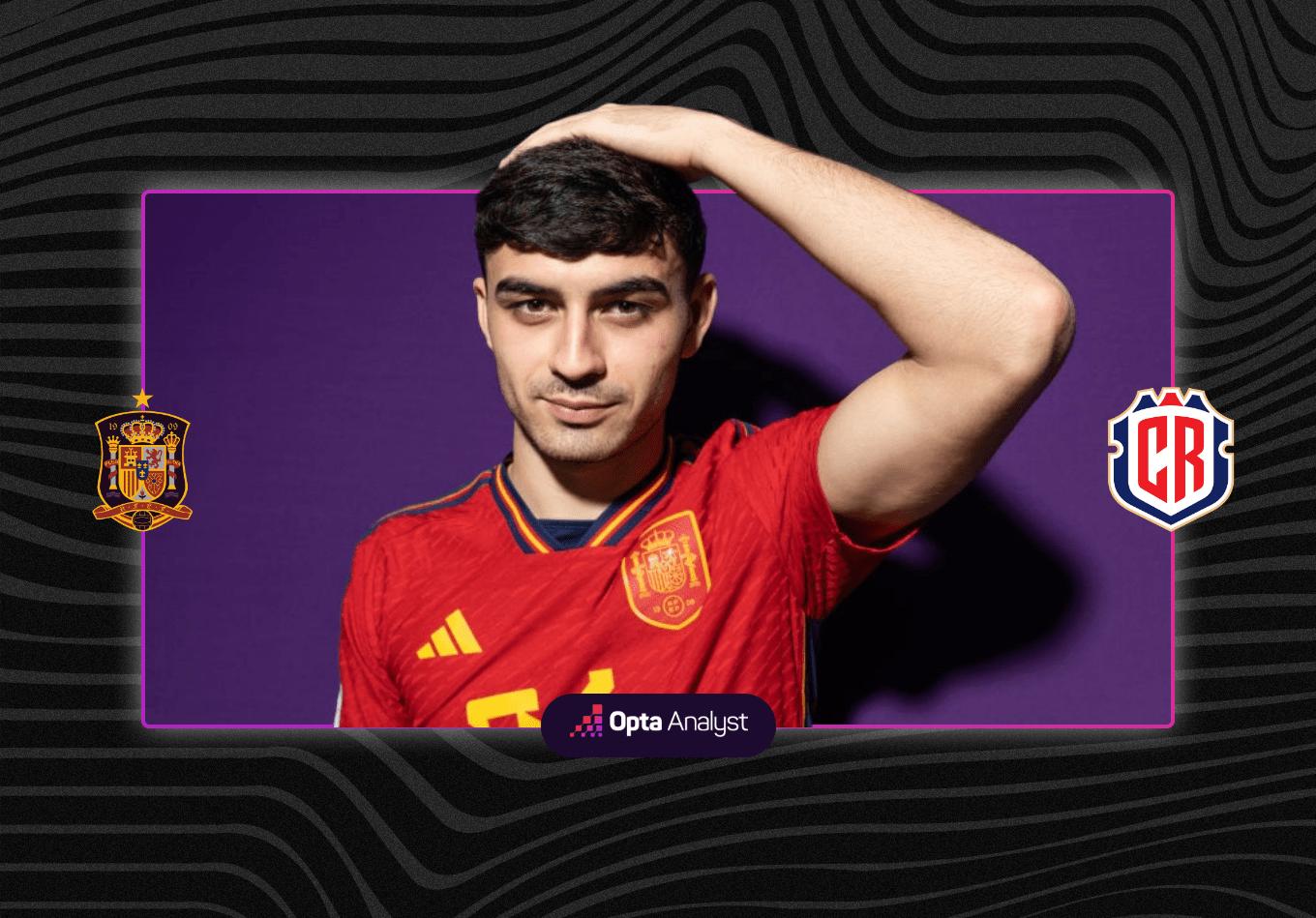 We preview the 2022 World Cup match between Spain and Costa Rica, including our pre-match prediction for each team’s opening game in Group E.

Play the Opta Challenge for Spain vs. Costa Rica now for a chance to win $500

No other nation has lost more World Cup opening matches than Spain’s seven, and head coach Luis Enrique will be hoping his side do not miscue once again against Costa Rica in Group E on Wednesday.

Spain have not returned to a major tournament final since winning two European Championships and a World Cup between 2008 and 2012.

But a new generation of exciting youngsters is inspiring hopes of a return to those glory days, with players such as Pedri and Ansu Fati providing a new spark.

Spain’s youngest-ever World Cup goalscorer was a 22-year-old Fernando Torres at the 2006 edition, but a range of players could break that in Qatar.

Luis Enrique made 12 World Cup appearances for Spain as a player between 1994 and 2002, though he never made it past the quarter-final.

He hopes to get further than that as their head coach though, telling reporters: “Our goal is to play seven games in Qatar.”

Marco Asensio could be in line to feature after an impressive display in a friendly victory over Jordan, with Enrique saying: “He [Asensio] has been at another level, excellent.

“With that attitude, with the quality he has, he can play wherever.”

Wednesday’s opponents Costa Rica have won just five World Cup matches, though three of those came in their opening game of the tournament.

Costa Rica head coach Luis Fernando Suárez was full of praise for his Spain counterpart’s style of play, but also feels his side are ready to put in a competitive display.

“He [Luis Enrique] is a great coach,” Suarez said. “Despite everything that happens, Spain will always play the same way.

“We’ve been in World Cup mode for a long time. The group is feeling pretty good and is willing to give everything.”

Ferran Torres scored four times for Spain in qualifying for the tournament in Qatar, at least twice more than any other player, and Luis Enrique will be hoping the Barcelona forward continues that goalscoring form in this opening match.

Ruiz has featured in eight World Cup matches for Costa Rica, the second most of all time behind Christian Bolanos’ nine appearances. If the 37-year-old plays at this tournament, the former Fulham man would become the oldest player to feature for Costa Rica at a World Cup.

While Spain’s record in World Cup opening matches is shaky, they should have more than enough quality to get past Costa Rica at Al Thumama Stadium on Wednesday.

According to our supercomputer, Luis Enrique’s side have a 82.7% chance of winning the game, compared to Costa Rica’s 5.4%. There could be a few early nerves from Spain in many of their players’ first World Cup experience, so the 11.9% possibility of the teams drawing is not out of the question.