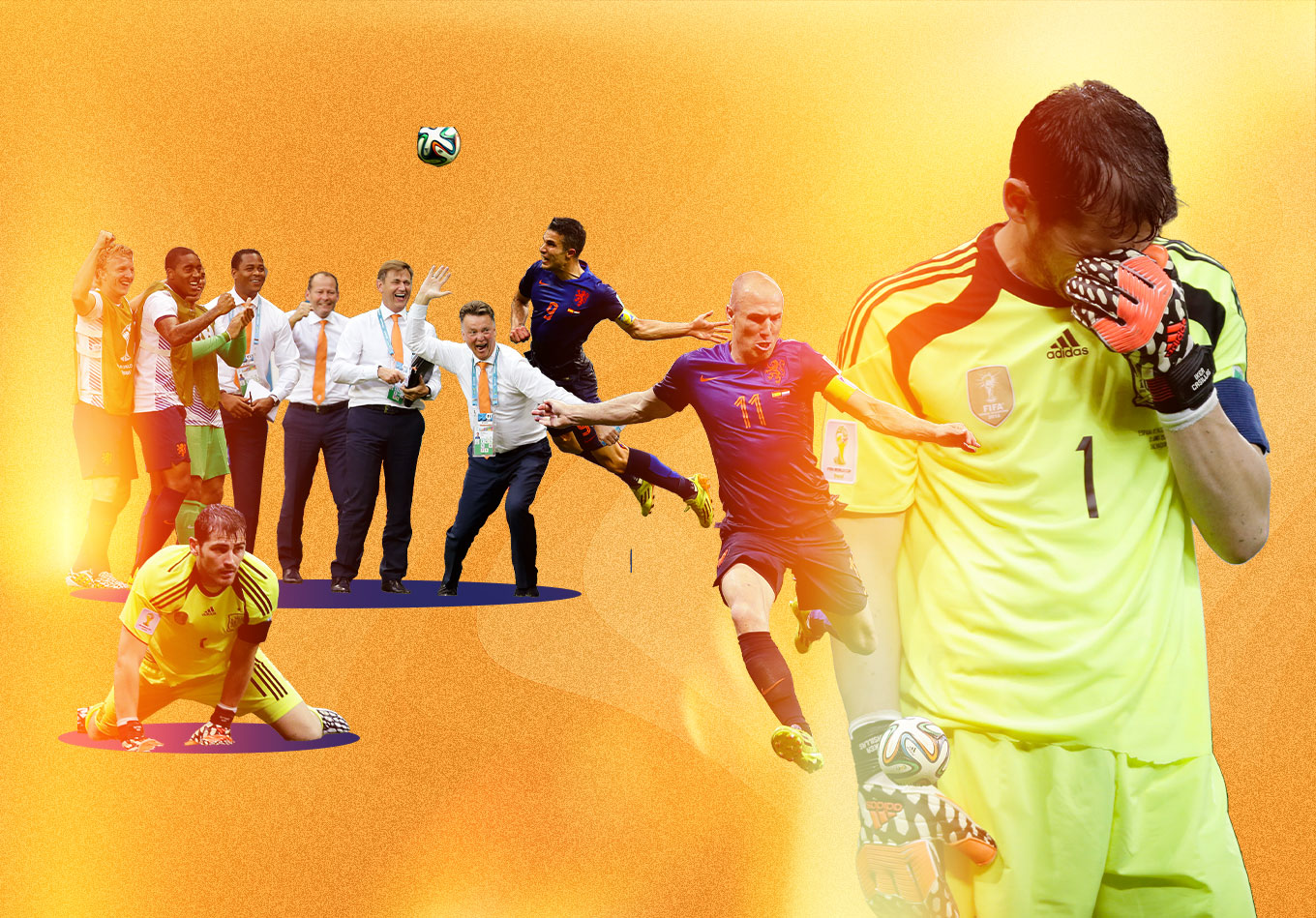 About That Game is a series looking at the data stories underpinning classic matches. This edition looks back at Spain vs. Netherlands at the 2014 FIFA World Cup, an unforgettable game between the finalists at the previous World Cup in 2010.

It’s very rare to see the two World Cup finalists from one edition play against each other again at the next World Cup. In fact, it has only happened three times in World Cup history. England and West Germany famously met in 1970 after their Wembley final drama in 1966, and so did the Netherlands and Germany in 1978. The third time, however, was arguably the most spectacular game between two very recent World Cup finalists. In 2014, the Netherlands and Spain were drawn to play their first World Cup game since the 2010 final against each other. But this time Spain, who had won the 2010 final, were on the end of an absolute battering by the revitalised Dutch.

Since their encounter in the 2010 final, Spain had proven to be one of the best sides in world football. They won the European Championship in 2012, conceding only one goal in the entire tournament, reached the final of the 2013 Confederations Cup, and altogether won 40 of their 54 games between the two World Cups. Naturally, they were top of the FIFA world rankings, as they had been for most of the time since 2008.

In May 2014, just before the World Cup, the Champions League final was played between Real Madrid and Atlético Madrid, featuring 12 Spanish players. And as if that wasn’t enough, they even managed to get the Brazilian Diego Costa to change nationalities and play as a striker for the Spanish national team in 2014. A smoother lead-up to the biggest tournament in the world is hardly imaginable.

How different the situation was for the Netherlands. Euro 2012 went horribly for the Dutch, losing all three games in the group stage on their way to an inglorious exit from the tournament. That seemed to mark the end of an era. Coach Bert van Marwijk was replaced by Louis van Gaal, who inherited an ageing squad. The Big Four of the Dutch National Team (Robin van Persie, Wesley Sneijder, Arjen Robben and Rafael van der Vaart) had not delivered at Euro 2012 and would be 30 years or older at the start of the 2014 World Cup. The rest of the team was mostly filled with players from the Dutch Eredivisie, who were talented but not quite “there” yet. In general, it was a team that seemed to have lost a lot of quality compared to the one that got all the way to final in South Africa four years prior.

This prompted Louis van Gaal to experiment with the formation. Knowing that Arjen Robben, Wesley Sneijder, and Robin van Persie could make the difference, but that his defence was inexperienced and vulnerable, Van Gaal opted to use a 5-3-2 formation. It was a big shock for a Dutch public that was used to its Oranje playing in 4-3-3 since the beginning of time. The new tactic was heavily criticised in anticipation of the World Cup, but for Van Gaal, it made sense. Van Persie, the pure striker, and Robben, the inimitable dribbler, could be supported by the passing Sneijder from the number 10 position, while the rest of the team had to focus on not conceding goals.

And so, the Netherlands faced Spain’s Barcelona-esque 4-3-3 in a newly established 5-3-2.

In a group that was completed by Chile and Australia, it was widely expected that holders Spain would be one of the teams advancing to the knockout stages. Few will have had the Spanish as third or fourth their 2014 World Cup predictions. So, when referee Nicola Rizzoli started the game between Spain and the Netherlands, there was a clear favourite.

Surprisingly enough, it was the Netherlands that got the first shot of the game. After a nifty through ball from Arjen Robben, Wesley Sneijder found himself one-on-one with Iker Casillas, only to shoot the ball directly at the Spanish goalkeeper. Although it was not a huge chance, it was certainly a promising start for the Netherlands.

After that attempt by Sneijder, it was Spain who took control of the game. During the first half, they became dominant in possession and brutal in their pressing. Between the 10th and 40th minute, the Netherlands were no more than spectators as Spain’s metronomic passing game played out under the blistering Brazilian sun. In the first half, the Spanish completed over twice as many passes as the Netherlands (332 to 135) and across the entire tournament, only twice did a team complete more passes in a first half than Spain did against the Dutch.

Logically, it was Spain who took a deserved lead. After 26 minutes, Diego Costa latched onto a through ball, carried the ball into the box and found Stefan de Vrij in his way. Costa cut back inside onto his first foot, before cunningly dropping to the grass to win a penalty for his new nation. The experienced Xabi Alonso had no trouble converting against Jasper Cillessen, who had never stopped a penalty in his professional career at that point.

A goal down and being totally dominated by the reigning European and World Champions. How were the Dutch ever going to overcome this?

Simple. All it took was a perfect, 40-metre cross from Daley Blind onto the head of a soaring Robin van Persie to equalise. It became an instant iconic World Cup goal. The Flying Dutchman made real on the football pitch.

At the brink of half-time, the score was 1-1 and against all odds, the Netherlands were still in the game. The expected goals read 1.40 for Spain, 0.50 for the Netherlands.

The second half started the way the first had ended: with a great assist from Blind. The left-back, who would transfer to Manchester United together with Louis van Gaal after the World Cup, found Arjen Robben between Sergio Ramos and Gerard Piqué with an excellent cross in the 53rd minute. Robben’s control was flawless and after successfully taking on Piqué, he was clinical in finishing past Casillas. The Netherlands, who had only had four attempts at this moment in the game, found themselves ahead.

As the below expected goals race chart illustrates neatly, it was at this point that the game shifted dramatically towards the Dutch. In a span of 20 minutes, Oranje created several good chances, scoring three goals and running out comfortable winners. Helped by an unexpected and arguably undeserved 2-1 lead, Van Gaal’s men were glowing with confidence.

A spectacular right-footed half-volley from Van Persie not long after Robben’s goal hit the bar, but the next Dutch goal was only a matter of time. The third followed in the 64th minute. A free kick from Wesley Sneijder, making his 100th appearance for the Dutch National Team, was whipped towards the back post and met by Stefan de Vrij who bundled the ball over the line. It was De Vrij’s first international goal, and a big relief for Louis van Gaal who had put his trust in the 22-year-old who was plying his trade at Feyenoord at the time.

In a matter of minutes, Spain had not only lost their 1-0 lead but also their confidence and energy. After the game, Sneijder would state that the Spaniards were exhausted, while the Dutch could keep going. That exhaustion may well have been mental, too, as Iker Casillas made a huge error for the Netherland’s fourth. San Iker, who was already Real Madrid’s second choice ‘keeper in La Liga 2013-14, decided the game in the 72nd minute. A poor first touch was intercepted by a lurking Van Persie, who was quick enough to push the ball over the line before Piqué could intervene.

The icing on the cake was yet to come, and it would be delivered by Robben. Never before was Robben in such great form for the National Team, and never again would he reach that level after the 2014 World Cup. Against Spain he attempted nine dribbles, hit three shots on target, and scored two goals, while also creating two chances for team-mates. Later in the tournament, Robben would record 44 carries against Costa Rica, a higher number than any other player during the 2014 World Cup, clearly benefitting from the freedom he was granted by Van Gaal.

The final nail in Spain’s coffin, the fifth goal, was again set up by Sneijder. A long pass from his own half was directed at Robben, who started to sprint towards Spain’s goal. Although Sergio Ramos had quite a head start, Robben ate up in the ground in no time with an lung-busting sprint, measured by FIFA at 37 kilometres per hour at the time, which would have been a “world record” according to the association. Although this was quickly corrected to a more average 31 kilometres per hour, the sprint certainly seemed like it was faster. Robben outpaced the entire Spanish defence, dribbled around Piqué and Casillas after entering the box, and convincingly smashed the ball in the top corner.

So, what was the deciding factor in the shock result? It might have been a combination of different factors. On the one hand, Spain were able to play their passing game for a substantial part of the game. They ended the match with 64% possession.

Look at the top 10 players to make the most passes during the game, and the first nine are all Spanish.

On possession alone, one might have thought the Netherlands were lucky to have scored a few improbable goals against a very dominant opponent. Suggesting that would not tell the entire story though. It would ignore the fine counter-tactic employed by Van Gaal, which made the absolute best of Sneijder’s passing and Robben’s pace. Even worse, it would ignore the expected goals metric as well. In the second half, Spain only managed to muster 0.3 xG, while the Netherlands amassed 2.3 xG after half-time. Yes, they overperformed that by scoring four goals, but isn’t that just a sign of having great finishers in top shape?

The blow was too big for Spain to overcome. A loss against Chile on the second matchday (2-0) meant that La Roja were eliminated after two games. Notably, Spain won their last group game against Australia (3-0) while playing with Fernando Torres and David Villa up front, who both scored. Spaniards today still wonder what could have been, had Vicente Del Bosque played with these two strikers instead of the sole Diego Costa in the first two games. We’ll never know.

The Netherlands’ good from continued, defeating Australia (3-2) and Chile (2-0) in the other group games. A late win against Mexico in the round of 16 (2-1) and a penalty win over Costa Rica (after a 0-0) ensured the semi-finals for the Netherlands. There, against Messi’s Argentina, it was again a 0-0, but this time the penalties brought no progression. Van Gaal and his men ended the tournament in style, beating hosts Brazil 3-0 in the consolation final.

They say history repeats itself, and this winter, there’s a big chance you’ll experience some déjà vu at the World Cup in Qatar. Again, the Netherlands will be managed by Louis van Gaal who will, again, play with a 5-3-2 formation. Players like Jasper Cillessen, Stefan de Vrij, Daley Blind and Memphis Depay were there in 2014 already. This time however there will be no Robben, Van Persie or Sneijder.

Those are some big shoes to fill for the current squad, but at a World Cup, as the Dutch proved on that sweltering day in Salvador, who knows what can happen?