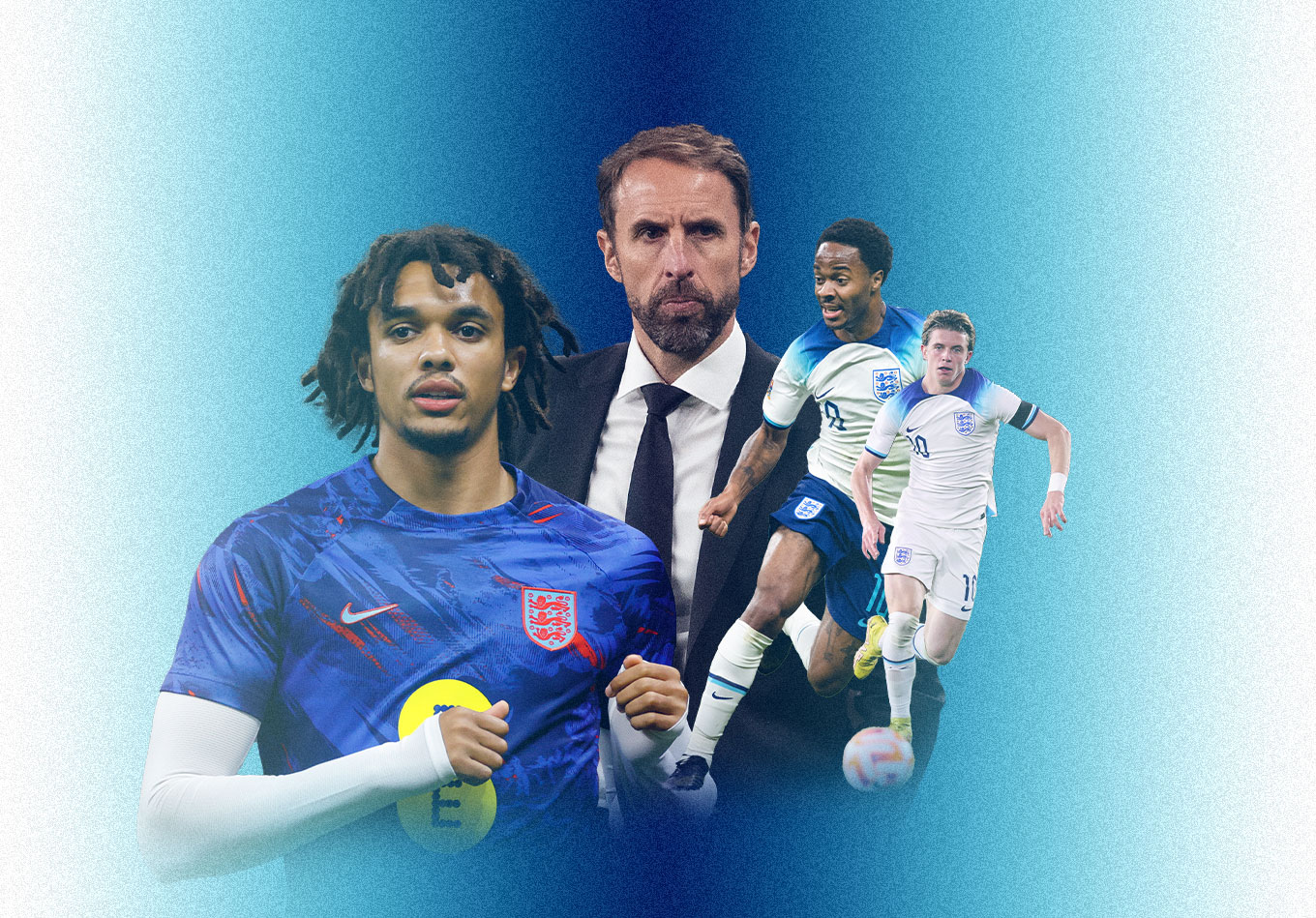 Back three or back four? Who should flank Kane? Who starts in midfield? Our answers revealed.

There is less clarity over what England could or should achieve than at any point in the nation’s history. Gareth Southgate is without question the most successful England manager since Sir Alf Ramsey and yet the tide seems to have turned against him. Many critics predict a sluggish performance and early exit, yet it’s perfectly plausible that the draw will once again open up for England, who have a potential path to the final that reads: Iran, Wales, USA, Senegal, Denmark, and Portugal.

The confusion, the mixed messaging, is just as prominent in the squad selection. On the one hand, this is England’s oldest and most experienced World Cup squad since 2010, with the combined 820 caps a full 70% increase on the total of 482 for Russia 2018, but on the other Southgate has fully integrated Jude Bellingham, Bukayo Saka, and Phil Foden. England are constantly evolving and yet always seem to be in the same place.

Sifting through the confusion, here are three areas England are struggling – and our suggestions on how to improve them.

Fundamental to any tactical dissection of England is a hand-wringing, angst-ridden discussion of how to gain control of central midfield, a conversation muddled further by the lack of clarity on Southgate’s formation. His trusty 3-4-3 was used just twice in the Nations League but the 4-2-3-1 was frankly an unmitigated disaster and, with a semblance of quality restored in the 3-3 draw with Germany in a 3-4-3, that is most likely the way forward.

England are a slow, ponderous side (more on that later), and as everyone knows the lack of world-beating quality in central midfield is what allowed Croatia in 2018 and Italy in 2021 to gradually gain control in the middle of the park. In the most recent Nations League campaign England ranked 13th out of 54 nations for total number of 10+ open-play pass sequences with 91, below Ukraine, Turkey, Slovakia, and Greece. Their average number of passes per sequence was 4.3, putting them 11th and below even Scotland.

It probably didn’t help that England frequently changed formation and used four different combinations of central midfielders, with Declan Rice and Jude Bellingham together in just three of the six matches. And although England still did not perform well in those games, there is reason to be optimistic about a Rice-Bellingham partnership – which is certainly preferable to any other pairing.

Rice, as usual, is in the Premier League top ten (and is the highest-ranking Englishman) for tackles and interceptions this season with 60, is top of the charts for outfield players in ball recoveries (139), and has a higher pass accuracy (89.1%) than any other English midfielder. He is the anchor and obvious choice. Bellingham should be another guaranteed starter and hopefully Kalvin Phillips’ unhappy few months at Manchester City (he has managed just eight Premier League minutes) means the Borussia Dortmund teenager gets the nod, because he can provide that composure, press-evading possession, and calm distribution England have badly missed in the last two tournaments.

Bellingham has completed the second most successful passes in the opposition half (393) in the Bundesliga this season, behind Joshua Kimmich; he is in the Bundesliga top 10 for attacking sequence involvements from open play; and he ranks second for total tackles (48) in the division.

Here is an all-round midfielder able to win, receive and keep the ball high up the pitch – exactly what England missed as they were gradually pinned back by Croatia and Italy. By contrast, for Leeds United last season Phillips ranked 130th in the league for progressive passes (60) and 205th for passes in the opposition half (352), which is a stark contrast with Bellingham even accounting for the difference in possession share at their respective clubs.

Beyond control, England also need greater forward thrust, and in theory Rice and Bellingham provide just that. Bellingham is top of the Bundesliga charts for progressive carries per 90 with 9.6 and Rice is third in the Premier League with 9.3 per 90. As for distance covered by those progressive carries, measured in metres, Rice is number one in the Premier League with 115.7 per 90 and Bellingham is second in Germany with 101.1.

Those are world-beating statistics that Southgate ought to pay attention to. We know he isn’t going to sit England high: they ranked 40th out of 54 for pressed sequences, with 63, in the Nations League and made more defensive actions than all but Latvia, Moldova, Kazakhstan, and the Republic of Ireland. So, for England to increase their verticality and begin playing less stodgy football – particularly against the low blocks of Iran and Wales – Southgate should release Rice and Bellingham to carry the ball deep into opposition territory.

But that isn’t the only way to make England a little more purposeful with the ball. In the Nations League their ‘direct speed’ (metres per second progressed upfield in open play sequences) was 0.99, the second lowest number of all 54 nations and just ahead of Spain – who are deliberately patient in order to suffocate opponents. England’s ‘directness’ (the percentage of the total distance covered per sequences that is upfield) was 0.17, the third lowest ahead of Croatia and Spain.

It’s no bad thing to be patient, and we all know Southgate is a conservative tactician prioritising the safety of his defensive block over urgent progressive football, but those numbers are far too low – especially for the opener against Iran, who under Carlos Queiroz are among the most defensive nations in Qatar.

Aside from the carrying potential of Rice and Bellingham, one way to improve these numbers is to ensure Phil Foden and Bukayo Saka are played together either side of Harry Kane, something Southgate has been reluctant to do because of Raheem Sterling’s historic excellent form for his country. But in the middle of a disappointing campaign for Chelsea, it is sadly time to let the younger and more urgent players in.

Foden (103) and Saka (85) rank second and seventh respectively for total progressive passes received in the Premier League this season, which is a reflection of their ability to read the game and find space between the lines. Sterling may be just as direct once in possession, but he tends to pick the ball up in wider areas and with more players between him and the goal. What’s more, Saka is fourth for attempted dribbles (55) and third for chances created following a ball carry (11), while Foden has 10 goal contributions from 11 Premier League starts this season.

Defence: TAA Should Come in and Maguire’s Presence Requires a Back Three

England’s defensive issues are perhaps overstated. John Stones has been performing well for Manchester City at right-back and has never looked more comfortable in his defensive work, as reflected in the fact his tackles won (0.86 per game) and errors made (0.0) this season are career bests. Ben White (who has made more tackles, 27, than any other Arsenal player this season) is effective at club level in a very similar position to the one Kyle Walker normally operates for England and should be a solid stand-in until the Man City man is fit.

The issue, of course, is with Harry Maguire, and at this late stage there just isn’t time for Southgate to experiment without him. His necessary inclusion is another argument in favour of a back three from the outset, because Iran will exclusively look to play on the counter-attack and Wales ranked joint-eighth for most direct attacks in the Nations League (11). Dealing with these breaks will require England to have three players to cover the width, because Stones and Maguire are both vulnerable in those situations and England’s back line lacks speed: neither player makes the top 150 Premier League players for top speed recorded this season. Adding White (who ranks 52nd) makes sense.

Of greater interest is whom Southgate picks at right wing-back, and although it seems highly likely Kieran Trippier will get the nod it ought to be Trent Alexander-Arnold – released from defensive duties in a 3-4-3 and possessing a unique creativity.  Alexander-Arnold has averaged more progressive passes per 90 minutes (9.5) than any other player in the Premier League this season and is second for open-play crosses (58) behind Kevin de Bruyne. Perhaps even more importantly, his capacity to hit a fading diagonal out to the left flank can be England’s secret weapon against low blocks in the groups.

All three of our suggested improvements – using a Rice-Bellingham pivot and releasing their ball-carrying ability; starting Saka and Foden together; and playing Alexander-Arnold in front of a back three – stand a decent chance of coming to fruition for the opener against Iran. The below would be our proposed starting XI:

But Southgate is just as likely to shun all three of those options. England are as foggy and as unknowable as they’ve ever been.