South Korea 2-3 Ghana: Kudus Shines in Yet Another Thriller | The Analyst 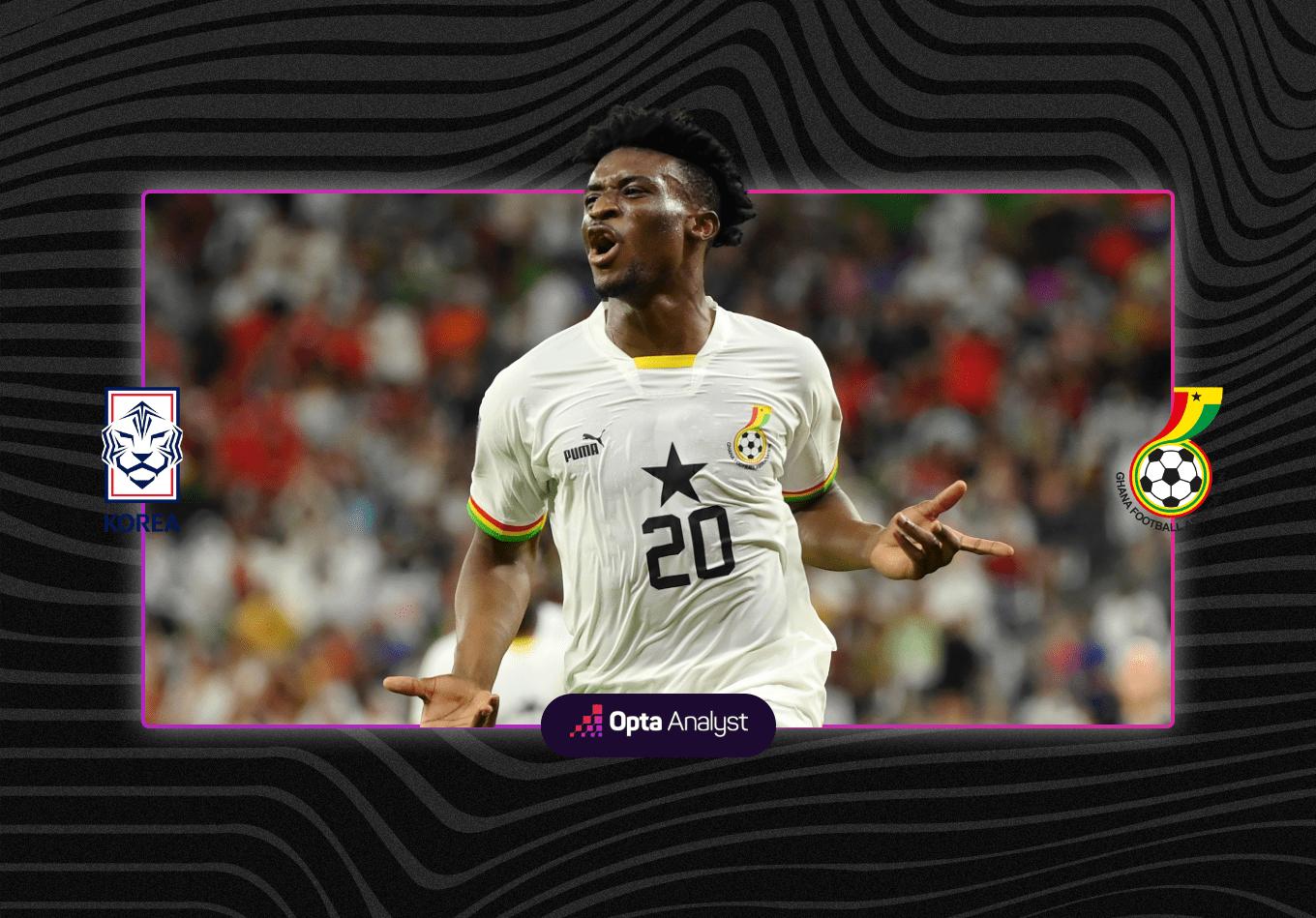 South Korea 2-3 Ghana: Kudus Shines in Yet Another Thriller

Ghana’s prospects of reaching the last 16 of the 2022 World Cup are in their hands after a thrilling 3-2 win over South Korea.

This game would have to have been quite something to live up to the 3-3 humdinger between Cameroon and Serbia in the day’s earlier encounter – but the first goal came about the same way, with the African side finding the net via a set-piece. Mohammed Salisu’s 24th-minute strike extended Ghana’s streak of scoring at the World Cup to seven matches; among African countries, only Nigeria have managed a longer such run in the competition (eight across the 1994 and 1998 editions).

Ghana came into this clash without a win in five World Cup outings – but Mohammed Kudus put them well on the way to changing that when he glanced in Jordan Ayew’s cross 10 minutes later. It also meant that the Black Stars had scored multiple goals in successive finals fixtures for the first time since their maiden appearance in 2006 (when they beat the Czech Republic 2-0 and the USA 2-1).

In their tournament opener – a 3-2 defeat to Portugal – Ghana well and truly parked the bus in the first half, not touching the ball in the opposition box once. Here, they did so 10 times – against a sorry-looking South Korea side who had just gone three halves of football without registering a shot on target.

But once they finally mustered one (156 minutes and three seconds into the tournament), they couldn’t get enough of them. Lawrence Ati-Zigi kept out Gue-Sung Cho’s first header easily enough, but he was powerless to stop the striker’s next two – which came two minutes and 48 seconds apart, drawing South Korea level just after the hour mark. This was the second match of Qatar 2022 to feature three headed goals (also France 4-1 Australia) – which was little wonder considering the South Koreans attempted (46) and completed (17) more crosses than any team in a single World Cup game since Spain vs. Switzerland in 2010. Their 35 crosses attempted from open play equalled the tournament record since 1966.

Their joy was to be short-lived, however: they were level for less than seven minutes, Kudus making it a brace with his second touch in the opposition box – and becoming the first Ghanaian to score twice in a World Cup match.

Otto Addo’s side became the second African team in as many games to notch three goals at these finals – after Cameroon earlier became the first to do so since the Ivory Coast vs. North Korea (3-0) at South Africa 2010.

Ghana face Uruguay (who play Portugal tonight) in the final group fixture, while South Korea – who are the third team to have 20+ shots in a match this tournament and lose, after Germany (26 vs. Japan) and Canada (22 vs. Belgium) – take on Portugal.