Serbia 3-3 Cameroon: The Game of the Tournament... So Far | The Analyst 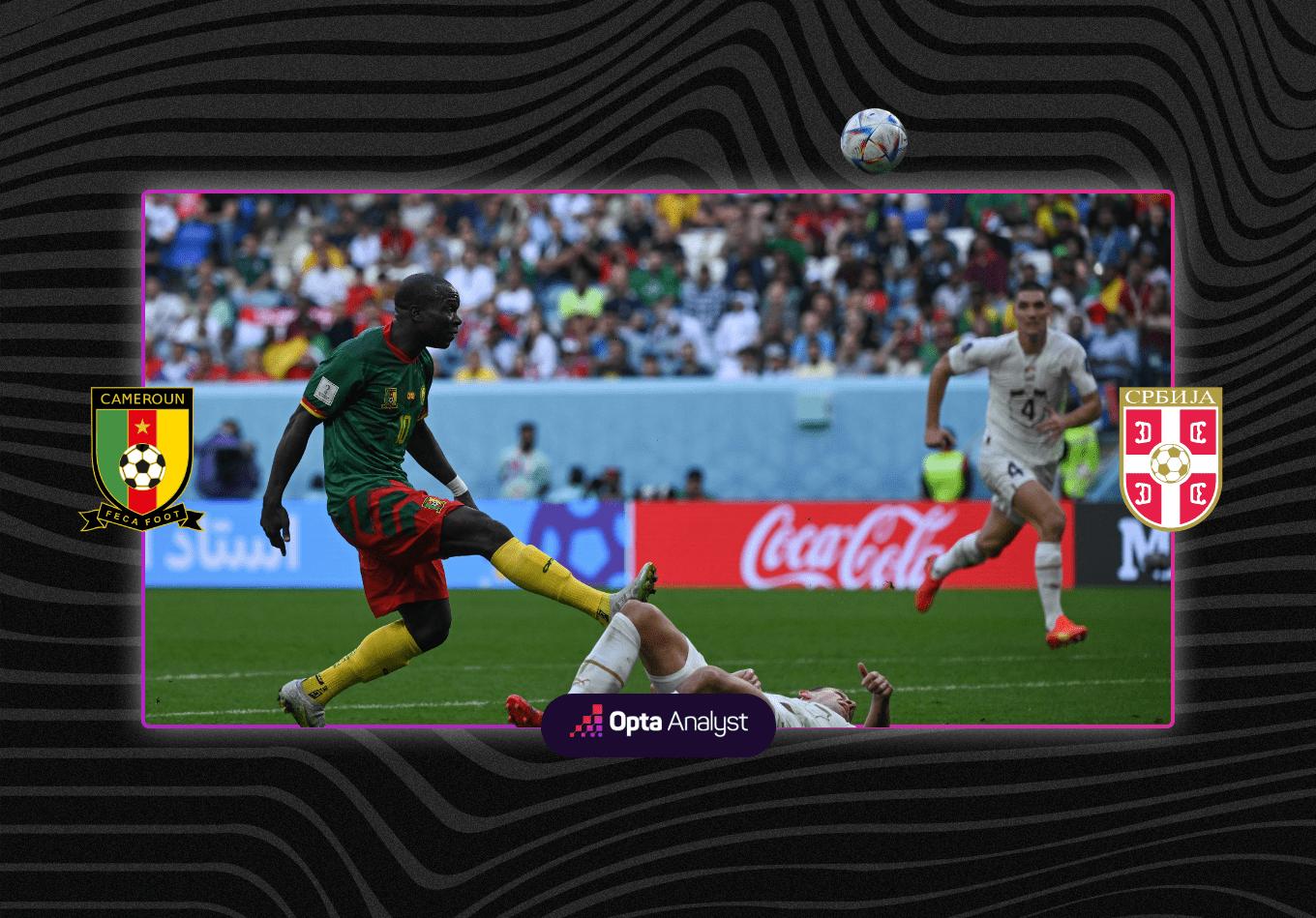 Serbia 3-3 Cameroon: The Game of the Tournament… So Far

It was arguably the game of the tournament so far, but Cameroon and Serbia might have dented each other’s hopes of progressing to the knockout stage of the 2022 World Cup with a pulsating 3-3 draw at the Al Janoub Stadium in Group G.

Cameroon posed a modest attacking threat in their opening 1-0 loss to Switzerland, finishing with an expected goals output of 0.74. Here, they surpassed that total within 28 minutes (reaching 1.10 xG), seconds before Jean-Charles Castelletto gave them the lead with his first international goal – a header from a corner, meaning the Indomitable Lions have now scored their last three World Cup goals from set-pieces (two corners and a penalty).

But Cameroon are on a miserable World Cup run – coming into this clash, they’d lost their last eight games at finals – and Rigobert Song’s side saw their fortunes flipped on their head late in the first half. First, as the clock ticked over into stoppage time, Strahinja Pavlović headed home Dušan Tadić’s free-kick with concerning ease; then, moments later, Sergej Milinković-Savić took advantage of some extremely lax defending to put Serbia in front.

With that dramatic double, Dragan Stojković’s team became the first in World Cup history to notch two goals during first-half stoppage time. They also amassed more xG in that period of injury time (0.27) than in the whole of their 2-0 defeat to Brazil on Matchday 1 (0.18). Carnage.

Since the start of 2021-22 for club and country, Mitrović has scored 62 goals in all competitions – all of those inside the box. He certainly had the chances to make that even higher in this match. Only Olivier Giroud versus Australia (1.72) has recorded a higher expected goals tally than Mitrovic did in this match (1.6) in a single game at World Cup 2022.

Did Serbia, once ahead, get ahead of themselves, though? Thirteen minutes later, Cameroon – who had looked on for a hiding – had remarkably pulled it back to 3-3 through two stunning counter-attacks – the first rounded off by a jaw-dropping scoop/chip from substitute Vincent Aboubakar (who might only have gone for such an audacious finish as he thought he was offside); the second Eric Maxim Choupo-Moting’s emphatic finish. For the second time in the match, two goals had been scored in the space of three minutes.

The introduction of Aboubakar certainly made a huge difference to Cameroon’s threat going forward. The Africa Cup of Nations top scorer from earlier this year (eight goals) has now scored nine goals from 33 shots (27.3% conversion) in international tournament football this year. In this match, he became the first ever substitute to both score and assist a goal in a World Cup match for an African nation.

A draw between Brazil and Switzerland this afternoon will all but eliminate both Cameroon and Serbia – but they served up an absolute treat in the final early kick-off of this World Cup. In fact, 43% of all goals scored in the seven 10am fixtures at the tournament came in this one – the wait was worth it.