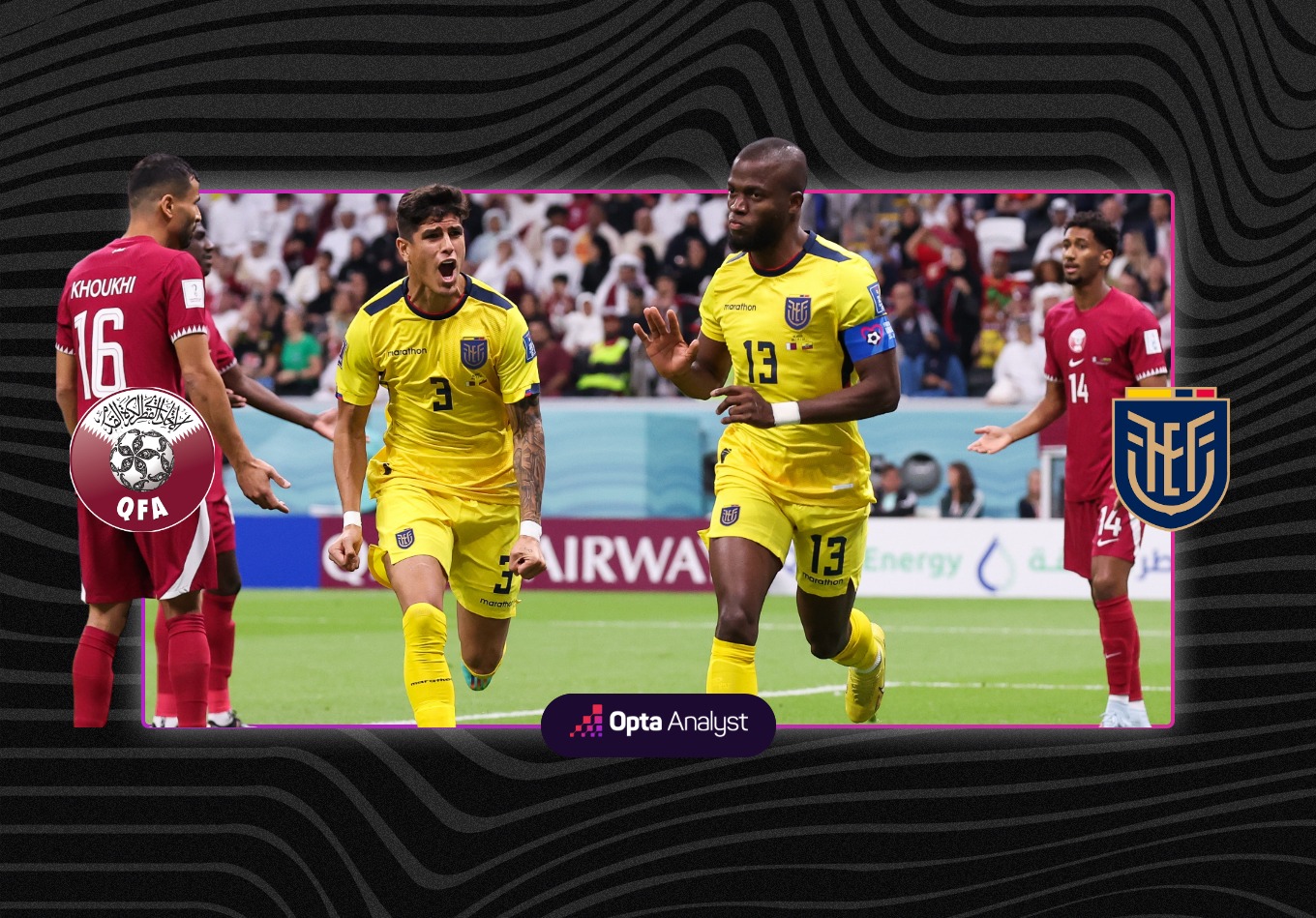 The World Cup’s opening ceremony at Al Bayt Stadium in Al Khor belonged to Qatar. The opening match was all Ecuador’s.

In particular, it belonged to Enner Valencia, who became the first player to score the first two goals of any World Cup finals tournament, as well as the first to score five consecutive goals for a South American nation at the World Cup. It spanned more than eight years with three coming in Brazil, but the latest two made Qatar the first host nation to lose the opening match at a World Cup.

Valencia flirted with becoming the first player to score a hat-trick in a World Cup opener, and it may have happened if not for everyone’s favourite footballing technology. His third-minute goal was overturned by VAR for offside, which saved Qatar keeper Saad Al Sheeb’s first error of the day and disallowed what would have been the fastest goal in the opening match of a World Cup. Instead, Valencia got his first in the 16th minute from the penalty spot after Al Sheeb took him down on a break into the box.

He added a second just after the half-hour mark on a header off a beautiful outswinger from Angelo Preciado. Valencia went down with an injury just before half-time that initially looked like it might end his night early, but the Fenerbahçe attacker came back on and returned for the second half. It’s a good thing for Ecuador as the 33-year-old’s 37 goals for his country are 13 more than the rest of Ecuador’s starting XI.

Perhaps a bit lost in the moment was the fact that Ecuador came in expecting nothing less than three points. La Tri have now lost once in their last 16 matches, and that includes draws with Brazil and Argentina – our two tournament favourites. They haven’t conceded in a team-record seven straight and find themselves a step closer to advancing to the round of 16 for the second time in tournament history.

Qatar became the 11th of 12 teams from the AFC confederation to lose their first ever World Cup match, sinking in the gravity of the moment more than a decade in the making. It was Qatar looking like the team that landed in the country mere days ago rather than the side that’s had years to prepare this specific side together under Félix Sánchez.

Al Ennabi struggled to defend in their own penalty area early on, and they went without a touch in the Ecuador box until just before the half-time whistle. Hassan Al Haydos’ stoppage-time cross found Almoez Ali in behind Ecuador’s defence, but the Qatar striker struggled to direct a clear header and missed the target.

The second half was hardly as much of a nightmare, but it wasn’t much to watch. Qatar still didn’t manage a shot on target, joining the United States in their 1994 round of 16 match against Brazil as the only hosts since 1966 to fail to put a shot on target in a World Cup match.

Overall, a match that started with plenty of excitement certainly died out, and the 11 total shots matched the fewest in a World Cup match since 1966 (matching Senegal vs. Colombia in 2018).

If Qatar are to avoid becoming the second host nation to fail to advance to the round of 16, they’ll now need those points to come against African champions Senegal in Matchday 2 and group favourites the Netherlands.

Ecuador, meanwhile, now have a 68.4% chance of reaching the last 16 with the Netherlands and Senegal to further impact those chances tomorrow. Qatar’s have dropped to just 4.7%. It was as tough an introduction to World Cup football as some there must have feared.