Qatar vs. Ecuador: Prediction and Preview | The Analyst 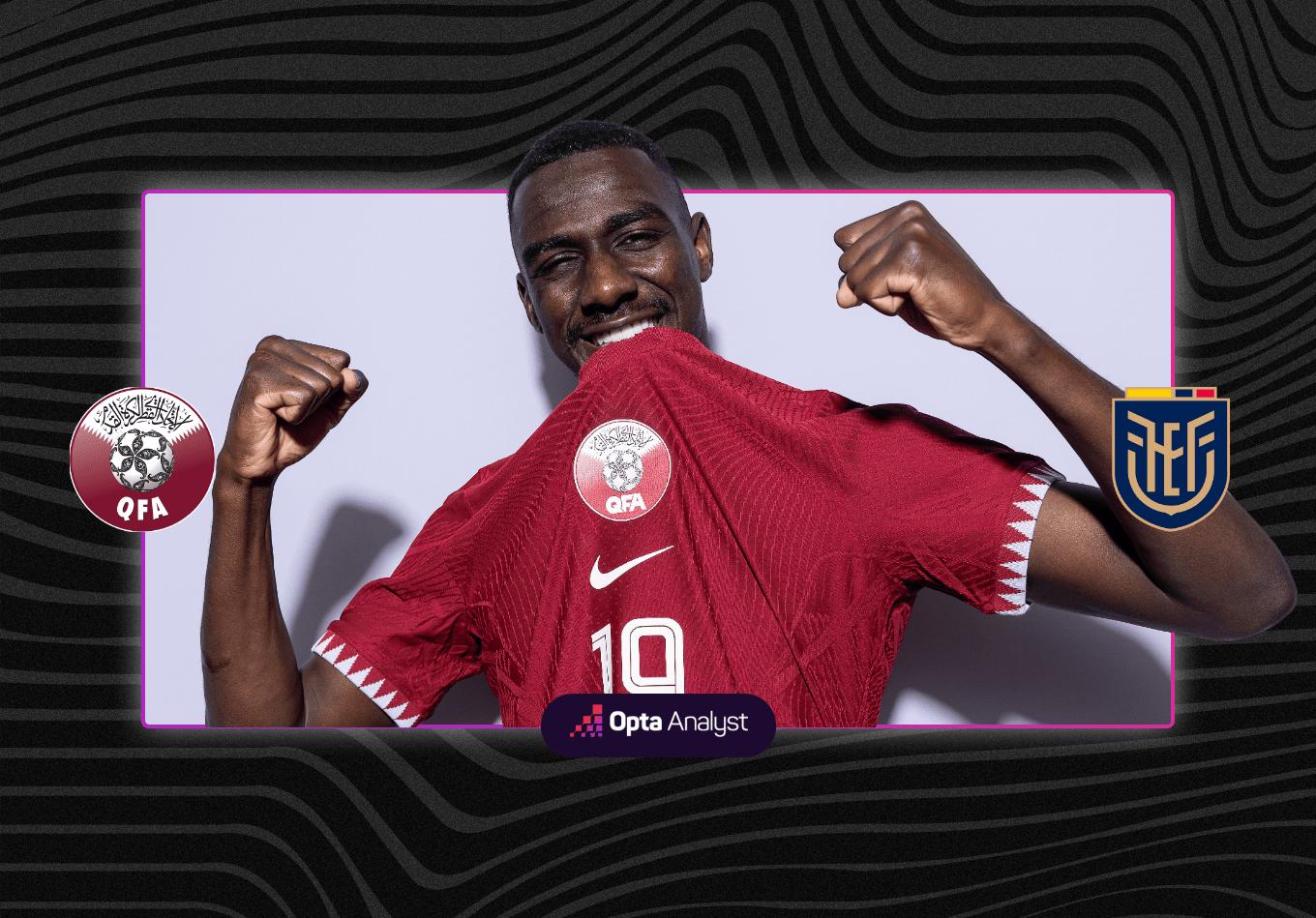 Qatar vs. Ecuador: Prediction and Preview

We preview the 2022 World Cup match between Qatar and Ecuador, including our pre-match prediction for the opening game.

Play the Opta Challenge for Qatar vs. Ecuador now for a chance to win $500

History will be made when hosts Qatar get the 2022 World Cup under way with a clash against Ecuador and their head coach Félix Sánchez says, “you never know what can happen”.

Al Bayt Stadium will be the venue for the opening match of the tournament on Sunday and Qatar’s first World Cup game.

The 2019 AFC Asian Cup champions are not expected to qualify from Group A, which also includes Netherlands and Senegal. Our tournament predictor gives Qatar the lowest chance of exiting the group and making the round of 16, at just 24.97%.

Sánchez is realistic over the host nation’s prospects but is relishing the challenge of trying to defy expectations.

The Spaniard said: “Obviously, I’m not talking about Qatar winning the World Cup, but competing at a good level against those three teams is our challenge.

“Then this is football, and you never know what can happen.”

Ecuador are 44th in the world rankings, only six places higher than Qatar as they prepare to lock horns in Al Khor.

Defender Byron Castillo was a late omission from Gustavo Alfaro’s squad due to a dispute over his nationality this week.

Alfaro knows his Ecuador side are not well fancied to make their presence felt but expects them to make life difficult for their group rivals.

“They are teams that are superior to what we are, for a reason we were in pot number four in the draw, if we had been the best we would have been in pot one or two. We have to make things difficult, we have to be the pebble in their shoe.”

If history is anything to go by, there should be entertainment on Sunday, as the past four opening World Cup games have produced 17 goals at an average of 4.25 per match.

Al Bayt Stadium has been a happy hunting ground for Qatar, as they have won their three previous matches at the venue with an aggregate score of 9-0.

Striker Ali was the leading scorer when Qatar were crowned the champions of Asia three years ago, scoring nine goals in seven games. That impressive tally was achieved from only 10 shots on target and was a record for a single edition of the tournament.

Ali was also their top scorer at the 2021 CONCACAF Gold Cup (four in five games) last summer. Having also scored against Paraguay in Qatar’s opening matchday 2-2 draw at Copa America 2019, Ali has the unique record of scoring in three different confederation finals tournaments.

Ali scored the only goal from the penalty spot in Qatar’s 1-0 friendly win over Albania on 9 November – their final warm-up game for the tournament. Currently the joint-record scorer for Qatar on 42 goals, there’s little doubt he will be the central figure in the Qatari attack in these finals.

Left-back Estupiñán can make an impact at both ends of the field for Ecuador. One of three Brighton players in the Ecuador squad, alongside midfielders Jeremy Sarmiento and Moisés Caicedo, the attack-minded full-back joined the Premier League club in August following a two-season spell in La Liga with Villarreal.

He was a key player in qualifying for his nation, creating 22 chances as they reached the 2022 World Cup finals, more than any other defender in the CONMEBOL region.

Ecuador are fancied to spoil the party and get off to a winning start.

According to our prediction model, Alfaro’s men have a 41.4% chance of securing all three points in this opening game of Group A, with the draw rated at 29.0%.

Qatar’s have a 29.6% chance of coming out on top, according to the model, in what looks like being their best opportunity to register a historic victory.