Qatar at World Cup 2022: Ready to Surprise on the Pitch? | The Analyst 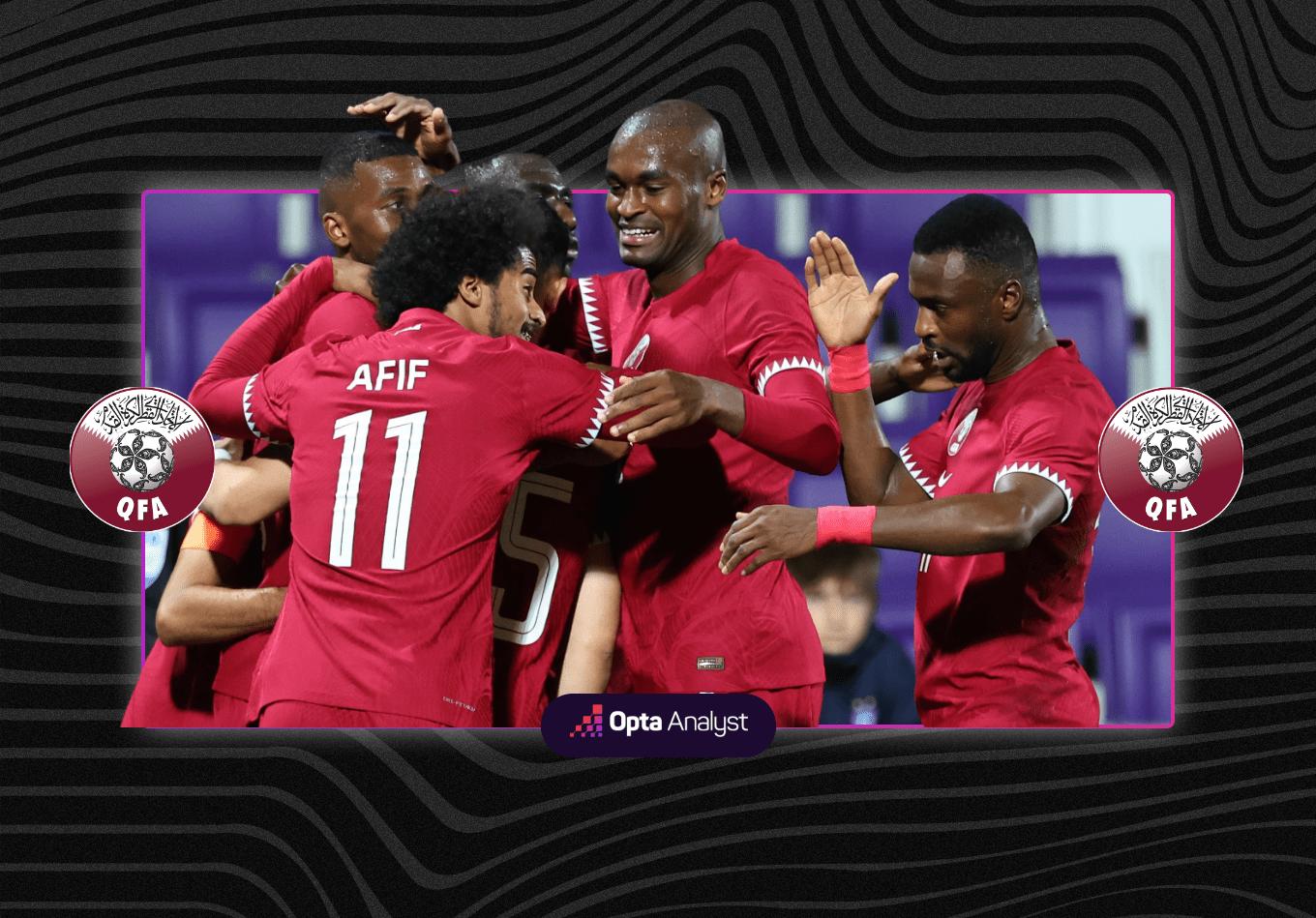 Qatar at World Cup 2022: Ready to Surprise on the Pitch?

There is always something around the host nation at a World Cup.

So much of the discord around the 2022 World Cup since Qatar was announced as the host nation has been about the country itself and its suitability to be the home of football’s biggest tournament.

With hosting duties come playing duties, though, and November will mark the first time Al-Annabi (The Maroon) will have featured at a World Cup.

Having only played their first game as a nation in 1970, Qatar have been preparing to give the best account of themselves they can at their own tournament, so we take a look at how they are shaping up heading into the national team’s biggest few weeks.

One constant through preparation for this tournament has been in the dugout, with Félix Sánchez in position since July 2017.

The 46-year-old from Catalonia was shaped as a coach at his hometown club, spending 10 years working with Barcelona’s famous youth set up between 1996 and 2006, before making the move to the Gulf with the Aspire Academy, working with the most promising Qatari footballers.

A year later, Sánchez led Qatar’s senior side to a maiden Asia Cup triumph, beating Japan 3-1 in the final in Zayed Sports City in the United Arab Emirates.

His contract ends once the tournament does, and so the pressure is on him to either earn an extension or perhaps prove he can take on a high-profile role elsewhere.

Having worked with the nation’s best and brightest prospects since 2006, Sánchez knows his players well and has a few key figures he will be relying on to make an impact at the World Cup.

Goalkeeper Saad Al Sheeb has been his country’s number one since debuting in 2009 and has 76 international caps to his name. Abdelkarim Hassan is Qatar’s second-most capped player (130), and takes up one of the three centre-back roles, despite predominantly playing at left-back during his career, and is known for having a venomous shot, exampled with his goal against Yemen at the 2019 Gulf Cup.

A third stalwart who like Hassan and Al Sheeb also plays his club football for Al Sadd, where Xavi cut his teeth in management, Hassan Al-Haydos is the team captain, a key playmaker in attack and Qatar’s most capped player of all time, with 169 appearances.

Akram Afif is another Al Sadd player who has become an increasing influence in the forward line, he was voted the best player in the AFC in 2019 and is equally adept at creating as he is scoring. Across the Qatar Stars League last season, only Michael Olunga (22) scored more non-penalty goals than Afif (13), but his creative stats were outstanding. Afif assisted a phenomenal 17 goals – six more than any other player – and created a league-high 75 chances overall and 63 chances from open play alongside the best expected assists total (8.3).

Arguably Qatar’s key goal threat heading into the 2022 World Cup is striker Almoez Ali, who was top scorer in the 2019 Asian Cup (three goals in six games) and the 2021 CONCACAF Gold Cup (four in five games). Having also scored against Paraguay in Qatar’s opening matchday 2-2 draw at Copa America 2019, Ali has the unique record of scoring in three different confederation finals tournaments.

3️⃣ @Moezali_ is the first player in history to score in three different continental tournaments 🏆 pic.twitter.com/hR676aqngu

Widely expected to move to a European club following personal success in these tournaments, Ali never moved from Qatari club Al-Duhail, where he’s struggled to replicate his goalscoring form from the international stage. Yet to play league football in 2022-23 due to the national team’s schedule ahead of the World Cup, Ali has scored just seven non-penalty goals in 37 Qatar Stars League appearances since the start of 2020-21.

Ali scored the only goal from the penalty spot in Qatar’s 1-0 friendly win over Albania on 9 November – their final warm-up game for the tournament. Currently the joint-record scorer for Qatar on 42 goals, there’s little doubt he will be the central figure in the Qatari attack in these finals.

Qatar certainly cannot say they haven’t had plenty of preparation, having played a frankly astonishing amount of football in the last two years for an international side.

Sánchez’s men played 25 games in 2021, and a further 13 in 2022, though the strength of opposition has differed greatly.

They lost all their three games at the 2019 Copa America but impressed following their invitation to the CONCACAF Gold Cup last year. After an opening matchday 3-3 draw with Panama, Qatar enjoyed impressive wins against both Grenada (4-0) and Honduras (2-0) to top their group and advance to the quarter-final. With nine goals, they were the top scoring team in the group stage ahead of the USA (eight) and Canada (eight).

After a 3-2 win over El Salvador in the quarters, where they led 3-0 inside 55 minutes before a nervy finish, they set up a semi-final tie with CONCACAF giants United States. The semi-final ended with a 1-0 defeat thanks to a goal four minutes from time, this despite having the better chances including a 61st minute penalty chipped over the bar by Al Haydos at 0-0.

That led them into their next invitation, to play against European opposition as an unofficial part of a World Cup qualifying group, providing friendly opposition to teams without a game in a group that included Portugal, Serbia and the Republic of Ireland.

Their early results were good, beating Luxembourg and Azerbaijan before drawing with Ireland, though they only avoided defeat in two of their remaining seven games, losing 3-1 and 3-0 against Cristiano Ronaldo’s Portugal and 4-0 in both games against Serbia.

Qatar reached the semi-finals of the 2021 Arab Cup before losing 2-1 to Algeria, and have largely drawn games since then, including a friendly in July against Serie A side Lazio.

They have kept themselves busy in the lead-up to the competition, with friendly defeats to Croatia’s U23 side and Canada followed by a draw with Chile.

Despite being top seeds thanks to their hosting status, Qatar were handed a tough group at the draw in April. Their Group A opponents will be Ecuador, Senegal and the Netherlands.

Ecuador finished fourth in South American qualifying, ahead of the likes of Peru, Chile, Colombia and Paraguay, scoring 27 goals in their 18 games – only Brazil (40) scored more often.

Senegal won the Africa Cup of Nations in February, beating Mohamed Salah’s Egypt in the final on penalties, before sealing their place at the World Cup in the playoffs via the same method against the same opposition. Their squad includes star players Edouard Mendy, Idrissa Gueye and Kalidou Koulibaly, though Sadio Mane could be missing through injury despite being named in the 26-man list.

The Netherlands failed to qualify for the 2018 World Cup but made sure they did not repeat that shame as they won Group G in European qualifying, winning seven of their 10 games and beating Turkey and Erling Haaland’s Norway to top spot.

Our pre-tournament predictions don’t favour Qatar, with the host nation being given a 25.9% chance of progressing to the round of 16 – the lowest of the four teams in Group A.

History is on the side the hosts, however. Previous host nations have reached the second round of the competition in 20 of the previous 21 editions, with the exception being South Africa in 2010.  Of course, 29% of the previous World Cup tournaments have been won by the host nation (6/21), most recently France in 1998, so Qatar can dream of making that seven…okay, maybe not. Our predictor gives them a 0.3% chance of doing this, but if they can get off to a positive start when they take on Ecuador in the opening match of the tournament on 20 November, then who knows what might be possible – maybe Qatar can dream.