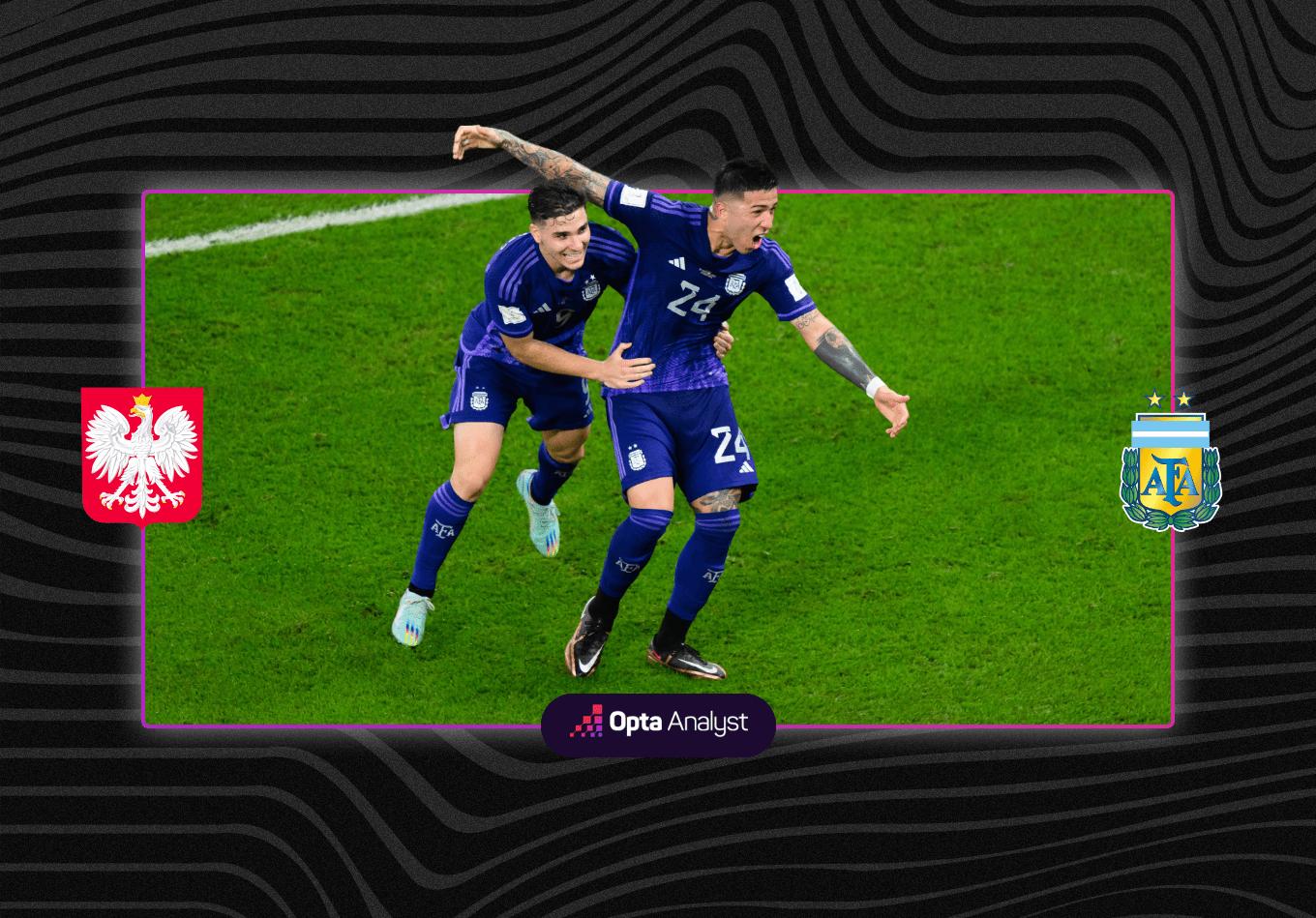 Since the 2010 World Cup Lionel Messi and Robert Lewandowski have scored 195 Champions League goals between them, as many as Chelsea in the same period. The gilded pair led their respective nations as captains this evening, with the Opta supercomputer giving Poland a 66.8% chance of progressing from this group, with Argentina on 80.9%, despite picking up a point fewer in their opening two games. Sometimes heritage really does count, but would it do so in this Group C decider?

Lionel Messi had a couple of on-target efforts in the first 10 minutes but neither stretched Poland goalkeeper Wojciech Szczesny, a man who — in his Arsenal days — conceded twice to Messi in a Champions League game in 2011. Argentina were bossing possession but it took until the 26th minute for them to seriously threaten Poland, with Marcos Acuña screeching one wide after Julián Álvarez had seen a shot saved. Angel Di Maria fired in an Olympic corner and half an hour into the game Argentina had already generated more shots than they did in the entire game against Mexico. Needs must, and all that, but the two-time world champions were looking good.

And when you are looking good you probably don’t need the bonus of what is surely one of the softest penalties awarded in World Cup history. Szczesny, coming for a cross, brushed Lionel Messi’s face and VAR pressed the “yeah that’s a pen” button to pretty much universal disbelief outside of Argentina. Justice was done, though, when Szczesny made his second penalty save of the tournament, diving to his left to make a superb stop, one that saw him equal Brad Friedel in 2002 and his fellow Pole Jan Tomaszewski back in 1974 in making multiple penalty saves at a single edition of the World Cup.

At the break Argentina had generated seven shots on target; the last side to register more in a World Cup first half were Argentina themselves against Hungary in 1982, a game famous for the fact that the referee allowed Hungary to kick off both halves. No-one knows why. Poland, Szczesny aside, had done little, with Robert Lewandowski making only 11 passes and failing to have a shot. The sight of Messi wasting a classic 0.78 xG penalty must have been particularly painful for Poland’s shot-starved star man.

We’ve all been to games where one-way traffic in the first half produces nothing and then that same team scores with their first chance of the second half, and that was precisely what happened here, with Brighton’s Alexis Mac Allister finding the sort of space he insists on in his surname, rifling home on 45:53. It was the first time Poland had conceded a goal at this World Cup and came from the 40th shot they faced. With news filtering through that Mexico had gone one, and then two goals up against Saudi Arabia, Polish fear was growing exponentially. Second place in Group C was slipping through their grasp. Argentina’s % chance of qualifying, according to the supercomputer, had climbed to 97%, while Poland were now sub-50% and below Mexico, in probability if not reality at that point.

We then entered one of the strangest yet most delightful scenarios the World Cup can serve up, as, with Poland and Mexico level on points, goals and goals conceded, they were separated on fair play, the same way that Senegal exited the 2018 World Cup at the group stage. Poland were ahead on behaviour, so just needed to not pick up any rash bookings, which made Grzegorz Krychowiak’s yellow in the 78th minute almost as dramatic as conceding a goal.

Argentina continued to probe — this game saw them go above 3.0 xG in a World Cup game for the first time in recorded World Cup history, helped by the fact they generated six big chances (but failed to score any of them) — but 2-0 suited them and, in a twisted way, it suited Poland too, as long as Mexico didn’t score again.

And reader, Mexico didn’t score again, in fact they conceded a late goal to Saudi Arabia which ensured that Poland finished second on goal difference, so the number of cards didn’t even matter in the end. Poland could have spent the second half picking up yellows for dissent, foul language, ducking and/or bombing and they would have been fine. Yes, their final shot of the game came in the 53rd minute, yes, they didn’t have a shot on target in the entire game and yes, Robert Lewandowski didn’t have a single shot and only showed signs of life towards the end when he barged Lionel Messi for some reason but the record books will show that Poland made it into the knockout stages of a World Cup for the first time since 1986.

That was a World Cup that turned out pretty well for Argentina, too.