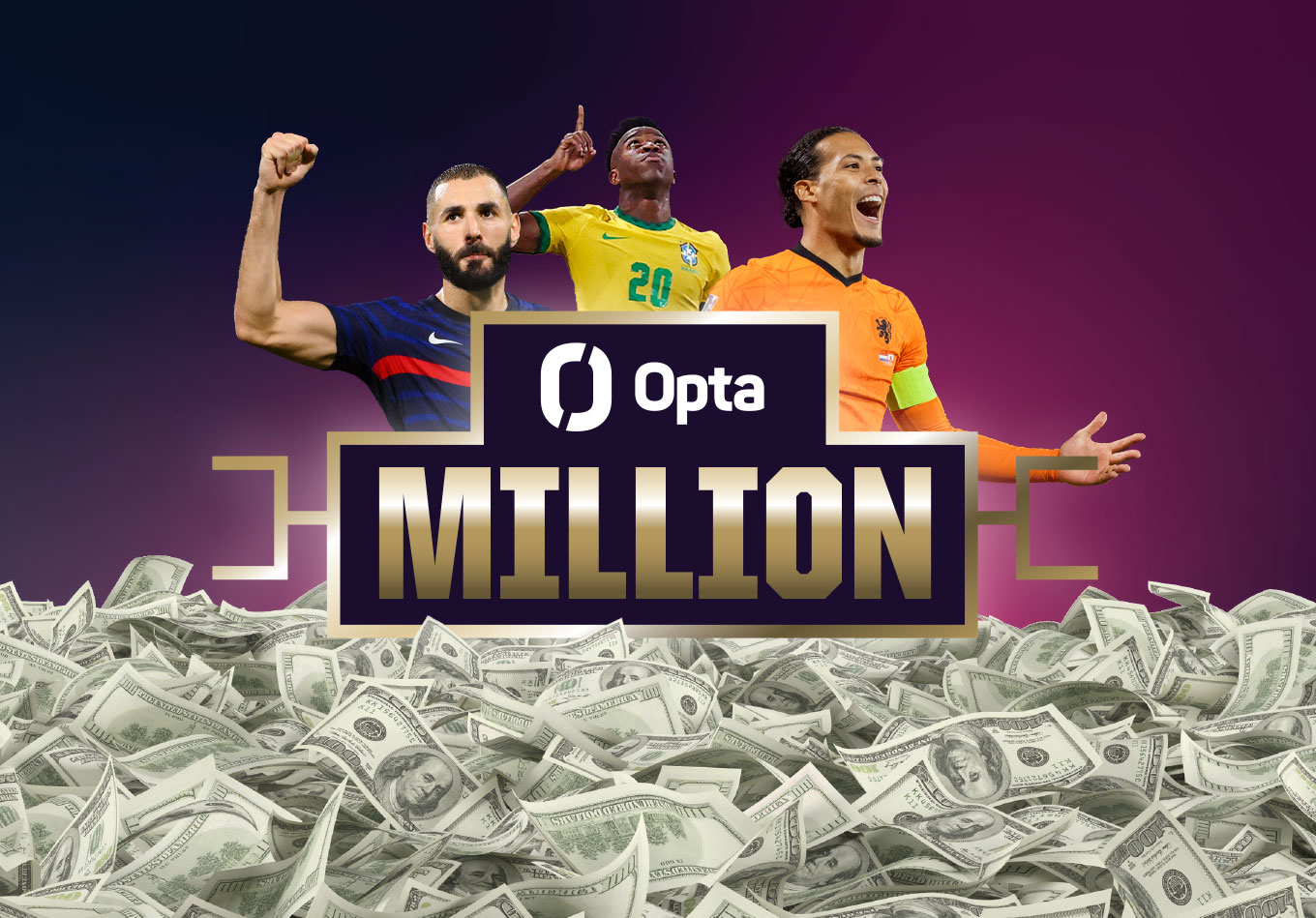 Destiny is in your hands. Play the Opta Million, predict your bracket correctly and you could win $1 million. To give you an idea of how you could fill out your Opta Million bracket, Sam McGuire takes us through his own predictions about what he expects will happen at the 2022 World Cup in Qatar.

There are few guarantees in life, but you can always rely on the World Cup for shock exits, surprise performances and decent weather.

While sunshine has been replaced by rain, at least in the UK, viewers can look forward to the other guarantees of a World Cup. There will be unexpected exists and you just know that a player will come along and have a tournament to remember.

Over recent years, Germany, Portugal, England, Spain, France and Italy have all fallen at the first hurdle and failed to make it out of the group. I do think there will be some scares in the first round of the competition and expect two of the favourites to crash out.

England have a tougher group than people realise having been drawn against USA, Iran and Wales. Gareth Southgate’s men have not had the best 2022 in terms of results or performances and finished bottom of their Nations League group.

The Three Lions scored just four goals across six matches and three of those came in the draw with Germany. Southgate has struggled to get his team firing and they have managed to keep just two clean sheets in their eight outings this calendar year.

Iran conceded just four goals in 10 matches as they topped their qualification group. Failure to win that opening game heaps more pressure on Southgate and his team in their next match against the USA. They aren’t in the best form either, but the onus isn’t on them, it will be on England. Wales, at their first World Cup since 1958, will very much be up for the clash on matchday three.

Harry Kane won the Golden Boot in 2018 but I predict he fails to get off the mark at all in this tournament. In the McGuire universe, England go out despite being unbeaten.

Portugal were knocked out of the 2018 World Cup by Uruguay and history could repeat itself this time around. Drawn in a group containing La Celeste, Ghana and a defensively resolute South Korea, it is not going to be easy for Fernando Santos to navigate his team into the round of 16 safely.

In fact, Portugal don’t have the best World Cup record against these three nations, winning just once in a match against Ghana. Their big names aren’t in the best of form heading into this competition either and a third-place finish could be on the cards. That’s right: Cristiano Ronaldo’s final World Cup hurrah ends in disappointment.

Reigning champions France will get out of their group but I don’t think they top it. They lost twice to Denmark in the Nations League and Kasper Hjulmand will extend that run to three when the two sides meet on matchday two. Denmark progress as winners of the group, France have to settle for a runners-up spot.

Germany head into the competition in patchy form having won just one of their six Nations League matches. They did, however, only lose one. I feel Hansi Flick’s side are being slept on though and they could click into gear. I expect them to top their group with maximum points. Spain will claim second position ahead of an impressive Japan side.

I also think Brazil and Argentina will have a 100% record in the group stages too. Both teams have been brilliant, with both teams winning seven of their eight matches in 2022. Argentina are unbeaten in 35 matches under manager Lionel Scaloni. It will take something special to end that run, and I just can’t see that happening in the group stage.

Serbia and Mexico will join the South American juggernauts in the next round.

The Netherlands claim top spot in Group A, just edging out Senegal who finish as runners-up. It will be a similar story in Group F with Belgium progressing as the winner of the group, closely followed by Canada, the surprise package. Croatia, runners-up in 2018, don’t make it out of the group.

The luck of the draw has been kind to the neutrals at this stage.

Arguably the standout clash is Argentina versus France. The game pits the master against the apprentice. Lionel Messi versus Kylian Mbappé. Though I can see the latter scoring, it will be the former who orchestrates a victory for Argentina.

Elsewhere, Brazil have too much firepower for South Korea and they progress to face a Germany side who put on a ruthless show in their win over Canada. At this stage, people will start to wonder whether Flick can guide Germany all of the way. But we’ll address that in the next round.

Reigning African Cup of Nations champions Senegal put in a mature performance to beat Iran in extra-time, with Sadio Mané reminding everyone why his Ballon d’Or ranking was more than justified, and their reward is a quarter-final game against Denmark, who confidently dispatched a Mexico side in their round-of-16 tie.

Wales land the first blow versus the Netherlands but Louis Van Gaal’s side overturn a 1-0 deficit to end Rob Page’s World Cup adventure.  Belgium and Spain play out an entertaining draw and only penalties are able to separate the two sides. Belgium progress to face Uruguay, who needed extra time to beat a spirited Serbia side spearheaded by Aleksandar Mitrović and Dusan Vlahović.

The Netherlands beat Argentina in the 1998 World Cup quarter-final. Argentina knocked the Dutch out at the semi-final stage of the 2014 World Cup. This clash can be the decider.

This will be one of the games of the tournament and it will be fitting to see Messi prove himself to be the difference-maker as Scaloni’s men march on to the semi-finals.

Brazil have the perfect opportunity to gain revenge for that night in Belo Horizonte, eight years ago. Germany romped to a 7-1 win over the hosts, who were without Neymar. This time around, the maverick No. 10 will be there, front and centre, as the Samba stars put on a show while simultaneously making a statement via a big win.

Senegal’s surprise run comes to an end in defeat to Denmark. The match goes all the way to penalties after a goalless 120 minutes. The Danes miss first but go on to reach their first-ever World Cup semi-final.

They will be up against Uruguay after they stunned the world with their upset victory versus Belgium. Though he started the competition slowly, Liverpool striker Darwin Núñez has found his goalscoring boots in the knockout fixtures. It will be their second semi-final appearance in eight years, having finished fourth in 2014.

It is the match everyone has been waiting for.  A repeat of the 2021 Copa América final, a game won by Argentina courtesy of a single Angel Di Maria strike in the first half. It is unlikely to be a free-scoring game, but it will be an entertaining one.

Just six goals have been scored in the last six clashes between these two sides. They tend to be tight, edgy affairs with a fair few rogue challenges. Expect the same this time around. Messi bested one club teammate in Mbappé in the earlier round and he will best Neymar in this game.

Just Uruguay stand in his way of winning the World Cup.

Diego Alonso guides his team to the final after putting on a tactical masterclass versus Denmark. His side used the dark arts to slow the game down and absorbed a lot of pressure before they were able to win the game on the break. Two swift counter-attacks were enough to see them progress to the World Cup final for the first time since they last won it in 1950.

Brazil end their World Cup campaign on a high, emphatically beating a tired Denmark team in the third-place play-off. The weather conditions played a part in the latter stages of the competition.

The World Cup final is a repeat of the first ever one held in 1930. Uruguay claimed victory that time around, but it will be a different story in 2022.

Argentina, who are now tied with Italy on six for World Cup final appearances, will have all of the pressure on them as they head into the game as firm favourites. This just wasn’t the case in 2014 when they faced off against Germany.

Scaloni’s side head into this game with a 100% record though and are not crippled by the weight of expectation. Instead, they play with a confidence befitting the best team in the world.

Messi, in what will be his last-ever match on the World Cup stage, is named Man of the Match as he scores and assists in a routine victory for this winning machine.

For the first time since 1986, Argentina are champions of the world and there is a big push for the 35-year-old Messi to win the Ballon d’Or.