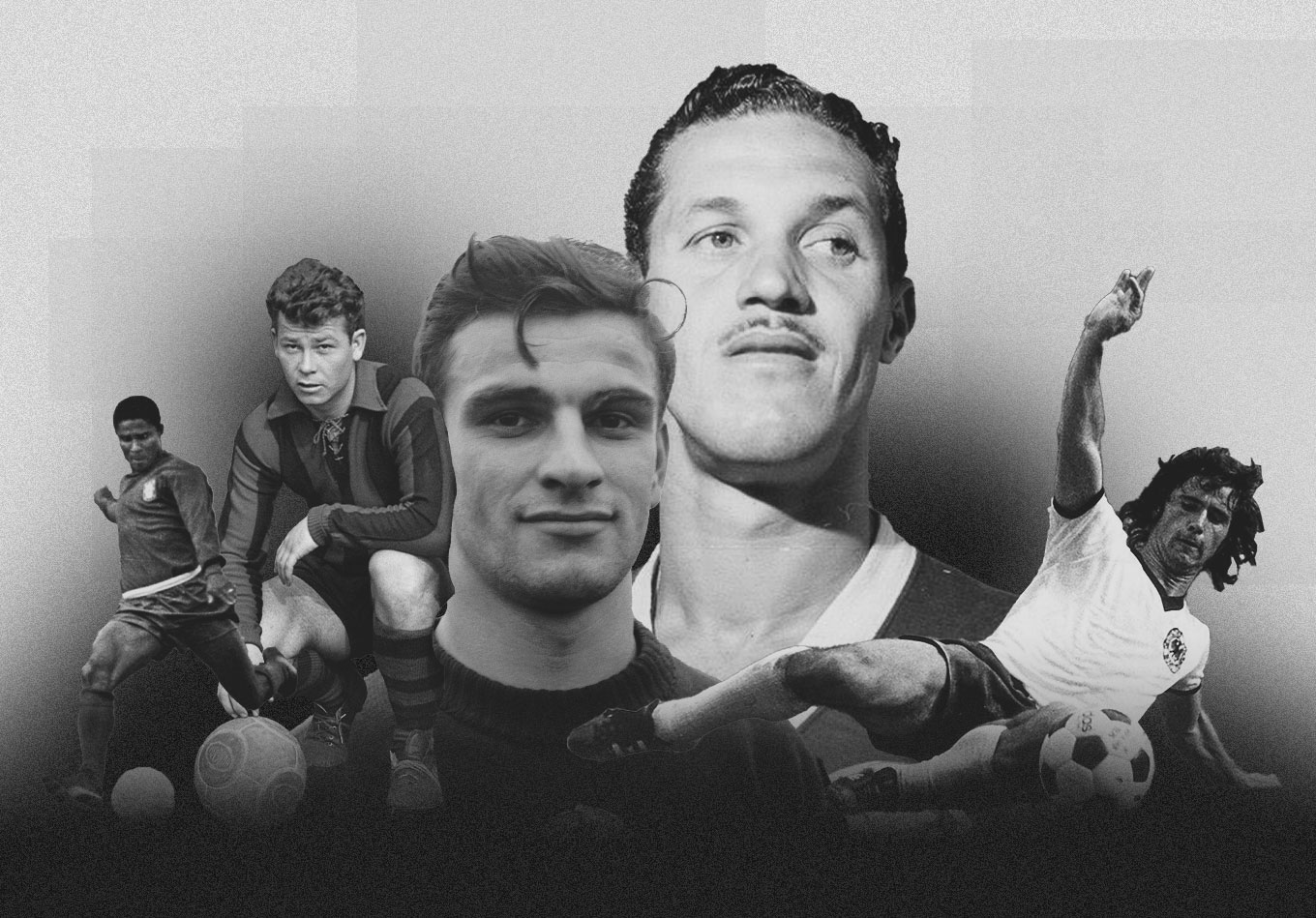 The only players to score nine or more goals in a single FIFA World Cup did so between 1950 and 1970 – a competition with nearly a century of history cramming its one-tournament stars into two decades. It seems the game’s defensive focus and organisation had yet to catch up to its emerging individual attacking skill. It was a time of free goals, and in some places free love, and if you weren’t around to experience it in person, you’re left with grainy video – and of course the numbers. None of the five players to score that many did it in more than six games while the modern-day format for World Cup tournaments has made it possible for top goalscorers to get seven in should they reach the last four.

Another five players have scored seven or eight goals in a single World Cup. Among that top 10, seven countries are represented. Four of the top 10 are Brazilian, while France, Hungary, Germany, Portugal, Argentina and Poland also make the list. For all their team success or near success, no goalscorers from Italy, Uruguay England, Spain or the Netherlands make the single-tournament list. And by confederation, the goalscorers mirror the only two to produce World Cup or Golden Boot winners, UEFA and CONMEBOL. Hugo Sánchez may have had high hopes in 1986, but Azteca belonged to Diego Maradona.

It’s also a list a bit devoid of the biggest names or names you might expect most. There is no Pelé, no Maradona, no Miroslav Klose, Jürgen Klinsmann or Thomas Müller. There’s a Mighty Magyar, but it’s not Ferenc Puskás. It’s a list that’s less of a place for Lionel Messi and Cristiano Ronaldo. Perhaps more than anything else, it’s a list to refresh our awareness that the game is one of eras, and the World Cup can be a spectacle of month-long moments for strikers who haven’t remained in football’s generation-spanning canon. In fact, the first two on this list never scored another World Cup goal or played in another World Cup match. They had their month and live on in places like this.

You may not be a fan of third-place World Cup matches, but we wouldn’t have this record without them. Fontaine was on nine goals heading into what for his team was 90 minutes of consolation football. For him, it was a chance to match or break a record. On June 28 1958, as France prepared to play the World Cup champions from four years prior, West Germany, the goals record for an individual in a single World Cup (spoiler alert for No. 2 on this list) was 11. Fontaine got the two to match this in 36 minutes. It took him until the 78th to establish the new mark, and for anyone down on third-place matches, he added another in the 89th to add a bit of distance and more than double his closest competition in the Sweden 1958 event. Pelé and Helmut Rahn scored six each. Only one player has reached double digits since.

At least two things happened when Sándor Kocsis scored his 10th and 11th goals of the 1954 World Cup in the semi-finals against Uruguay: First, he became the first player to reach a double-digit goal mark in a single World Cup finals. But it actually brought down his scoring average for the tournament. Prior to that, he’d managed a hat-trick against South Korea and four goals in an 8-3 group-stage win over West Germany to become the first player to score multiple hat-tricks in a single World Cup.

Who’s done it since? The man before him on this list and (spoiler alert again) the man immediately after him on this list. He added two more goals in the quarter-finals against Brazil, and his 2.2 goals per game are second for a player in one World Cup behind Poland 1938’s Ernst Wilimowski. Wilimowski scored four in the only game he played, but it was a 120-minute match and he went the distance, so it works out to a mere three goals per 90. That’s nothing compared to Fred’s 45 goals per 90 at the 2006 World Cup (one goal in two minutes played), but that’s why we have filters.

Let’s get back on track here with Kocsis. Those two goals against Uruguay happened in the 111th and 116th minutes to put Hungary through to a final they’d surely win against the West Germany side the Golden Team had so recently put eight past. Except, despite a two-goal lead in the opening eight minutes, they didn’t. And Kocsis didn’t score. And Fontaine surpassed his record number of goals a tournament later. This all might sound harsh to any non-Hungarian, but being World Cup runners-up was just one of the less-substantial near misses of the time.

No one scored more than four goals at the 1962 World Cup with six players reaching that mark. It was democratic goal scoring in Chile on land that was not going to be particularly democratic for long. The scoring outbreak of the previous two World Cups was finally under lock and key. Until it wasn’t. It was more than doubled four years later, and by 1970 we were ready again for a 10-goal man. It wasn’t to be West Germany’s time in Mexico, but it certainly was Müller’s. He too got a third-place match to try to pad the limited stats of the day, but he went goalless in a 1-0 win over Uruguay. It’s tough to blame him if his head wasn’t in it. Three days prior, he’d scored in the 94th and 110th minutes of one of the more dramatic knockout-stage matches in World Cup history. Italy and West Germany combined for six goals between the 90th and 111th minutes – the poor goalkeepers. Italy went through 4-3, but it might have been a favour to the Germans. Brazil’s 1970 national team was waiting in the final. Müller remains the last player to score two hat-tricks in a single World Cup, and only Gabriel Batistuta has managed two hat-tricks across multiple World Cups since.

It’s hard to say what would happen today if international football’s main event went on hold for more than a decade. There weren’t World Cups in 1942 or ’46. In 1950, it returned in a country that was ready to establish itself as a football power. Brazil had finished third in 1938 and hosted in 1950, and while it ended in heartbreak, there has been no going back from the sport’s elite. Official counts of the attendance at the Maracanã for the final between the hosts and Uruguay are somewhere between here and the moon, but that wasn’t the only numerical question. Brazil’s 57th-minute goal in a 6-1 semi-final win over Spain seems unimportant, but it was originally given to teammate Jair. It was eventually given to Ademir – his ninth of the tournament and one more than what at the time was a record eight by Uruguay’s Guillermo Stábile in the inaugural tournament in 1930. The record was Brazil’s. The trophy – in 1930 and ’50 – was Uruguay’s.

Cristiano Ronaldo has scored seven World Cup goals for Portugal and may very well become his country’s all-time leading scorer in the competition in Qatar. He needs three to have the record to himself. In doing so, he’s unlikely to get the nine Eusébio scored in a single tournament at England 1966. And what better than another third-place match to finish the job? While Just Fontaine got his four third-place goals from places on the pitch other than an uncontested spot 12-yards from the goalkeeper, Eusébio’s came via a penalty to make him then the fourth player to reach this mark. Four of his goals in the tournament came from the spot, and all four of those came from the quarter-finals on. It stands as a joint record for penalty goals all-time in the World Cup with the Netherlands’ Rob Rensenbrink and Argentina’s Gabriel Batistuta, but those two did it in at least 12 games. Eusébio did it in six with the four penalties coming in a three-match span. Penaldo, meet Pensébio.

The Brazilian contingency really picks up in spots 6-10, which is comprised of the only other players to score seven goals in a single World Cup:

Only three players have scored even six since the turn of the millennium. In addition to Brazilian Ronaldo’s eight in Japan and South Korea in 2002, Harry Kane did it at Russia 2018, matching Gary Lineker’s England record for a single World Cup from 1986, after James Rodríguez arrived on the international scene for Colombia four years prior in Brazil. In all, 15 players have scored six in one tournament, and three did it in fewer than five matches. Pelé scored six in four at Sweden 1958, Josef Hügi of Switzerland managed six in three in 1954, and Oleg Salenko had six in three in 1994 after scoring a record five goals in a match, but that’s a record for another story.