Mapping out Spain's Potential Route Through the World Cup | The Analyst 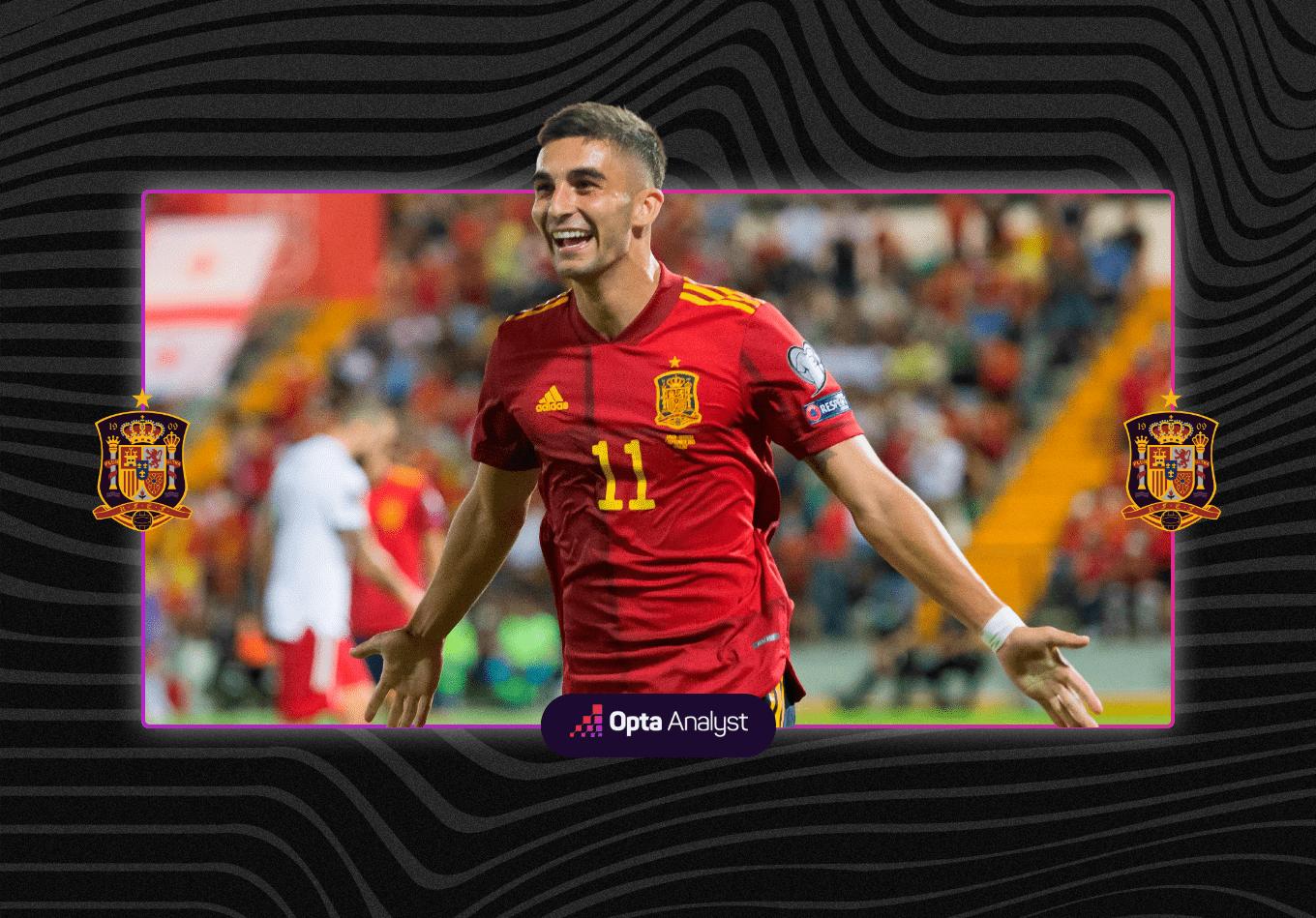 Mapping out Spain’s Potential Route Through the World Cup

Let’s take a look at the possible paths for Luis Enrique’s side to get through Group E and onto their second World Cup final. It could shape up to be the most daunting path of any title contender.

Qualifying for the 2022 World Cup was a breeze as Spain won six of eight matches with a plus-10 goal difference to win a very winnable Group B. Nations League wasn’t much harder with three wins, two draws and a loss in six matches against Portugal, Switzerland and the Czech Republic.

For that, the supercomputer likes them. It’s got them on an average of 6.14 points in the group stage throughout our simulations. Spain have the lowest likelihood among all 32 qualified sides of finishing last in their group (2.31%). However, their chances of finishing third – 11.92%, not an insignificant number – are higher than each of the other four teams to make up the top five most likely to win the tournament. Such is the reality of the Group of Death. Germany are at 15.83% to finish third in Group E and fresh off a fourth-place group finish in 2018.

It seems cut and dry with Spain and Germany as the logical teams to move forward, but things have been anything but logical for Spain and Germany in recent World Cups. Recall 2014 when defending champions Spain were unable to advance from a group including the Netherlands, Chile and Australia. And recall 2018 when defending champions Germany were unable to advance from a group including Mexico, Sweden and South Korea. So, 2010 was the last time both of these sides reached the knockout stages of the same World Cup. Neither of them won their group at Euro 2020. And Spain didn’t win their group at the 2016 Euros either – in the decade since Spain’s last title at a major tournament (Euro 2012), they’ve topped their group in one of four chances (2018 World Cup).

Beyond history, there’s the element of the rest of the group to consider. Spain open group play against Costa Rica, who, for all their somewhat recent history of faring well in a group of death (they won a group with England, Italy and Uruguay in 2014), they haven’t been much of a force with their current squad. Since the 2018 World Cup, they’ve played 13 matches against teams to qualify for the 2022 edition and won twice.

Winning this group isn’t a given for Spain. But as we progress here, you’ll see first in the group may not be the position that’ll provide the easiest route to lifting the trophy.

There have been nine consecutive World Cup tournaments with a round of 16 knockout format after Spain hosted in 1982 with a second group format. Spain have been in all nine tournaments and reached the knockout stages seven times. But it’s gotten to the point reputation-wise that if Spain settle for the last 16, it’s considered failure. See Russia 2018.

Neither figures to be an easy match with two 2018 semi-finalists the most likely opponent:

The point here is the difference in round of 16 opponents isn’t a huge gap and there may be a more favourable path through the quarter-finals if they don’t win the Group of Death.

This is where Spain’s path gets complicated as it relates to their finishing spot in Group E. If they win the group and get past the runners-up from Group F, whoever that is, the most likely quarter-final opponents for Spain are the winners of Group G. And Brazil are overwhelming favourites to top Group G. In fact, as of 16 November, Brazil’s 68.03% chance of winning their group is the highest among all 32 teams. They’re also our tournament favourites. Granted, they’d still need to advance past the runners-up of Group H in the last 16 to meet Spain in the quarters, but that’s most likely to be Uruguay, and in qualifying Brazil beat Uruguay 4-1 and 2-0.

This makes finishing second in Group E somewhat appealing for Spain. Their round of 16 opponent would still most likely be either Croatia or Belgium. But, if they were able to advance from there, Luis Enrique’s side would be faced with the winners of Group H or the runners-up of Group G. Portugal have the highest chances of winning Group H with Uruguay second. As for the runners-up of Group G, that’s most likely to be Switzerland or Serbia. Any of those opponents are overwhelmingly preferable to Brazil.

Spain have reached the semis (or the era’s format equivalent) twice in World Cup history. They of course won the tournament in 2010, and they finished fourth in 1950. The “semi-finals” in that Brazil tournament was a four-team final-round group set up with eventual champions Uruguay, Brazil and Sweden.

In 2022, this is the part of the tournament at which there’s no longer much of a chance of avoiding an elite opponent. Should Spain win their group, that puts them on a collision course with Argentina or the Netherlands here. The supercomputer gives Argentina the second-best chances of winning the tournament (12.67%), two spots ahead of Spain. That means the reward for winning the Group of Death is a path most likely to include quarter-final and semi-final dates with perhaps the two best teams in the World Cup.

The reward for getting through Brazil and Argentina would most likely be France, meaning should Spain do what the supercomputer says they’re supposed to do and win the Group of Death, they very well may have to follow the Path of Death to the trophy by eliminating the supercomputer’s three teams with over a 10% chance of winning the tournament – Brazil (16.78%), Argentina (12.67%) and France (11.95%).

The alternative is finishing second with a reasonable chance of avoiding all of those three until the semis, so it seems a loss to Germany on 27 November is the best way for Spain to win. If they beat die Mannschaft then carry on to top Brazil, Argentina and France, it’d be a World Cup trophy well-earned by defeating nations with a combined 13 tournament victories among them on the way.