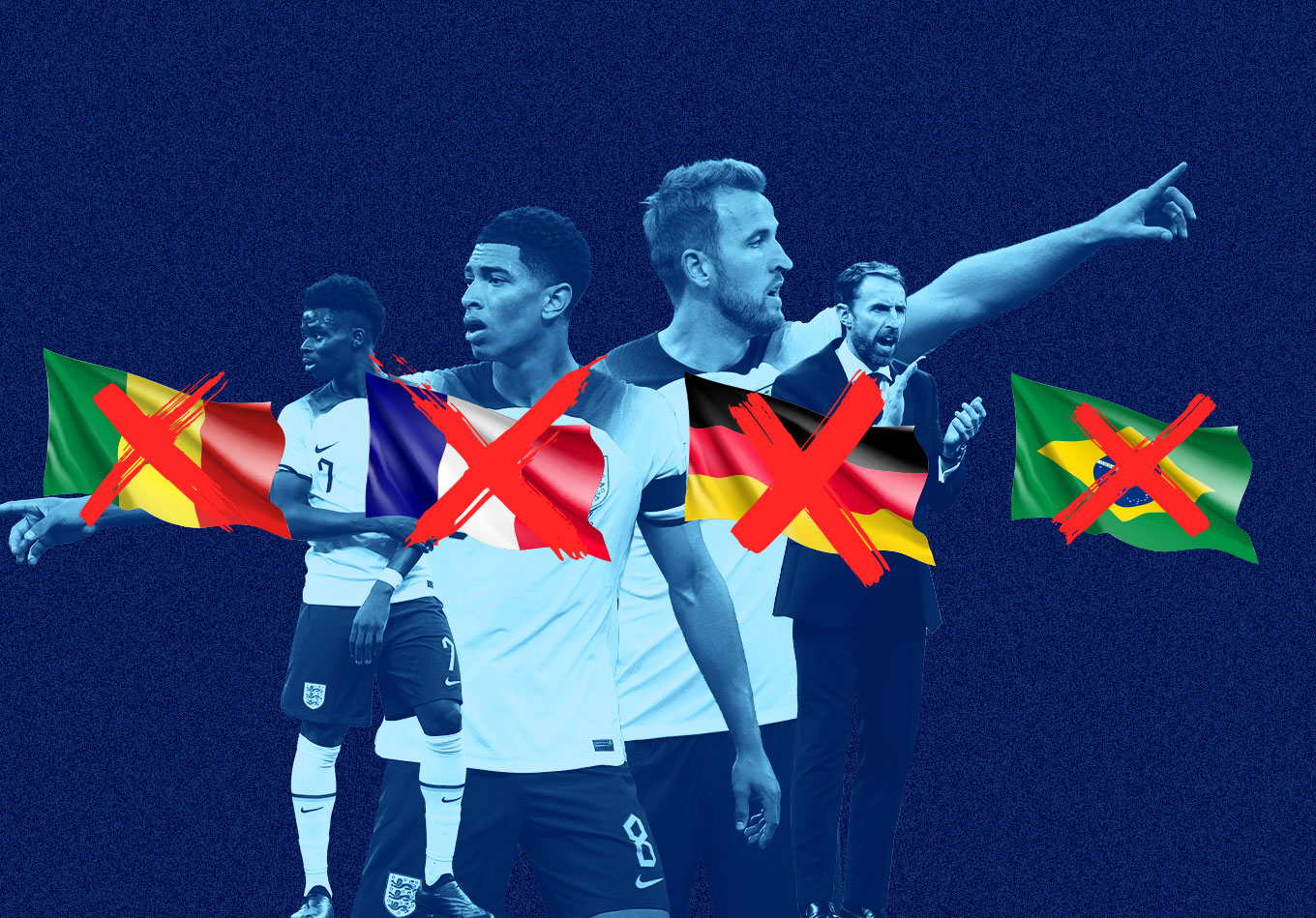 Mapping out England’s Potential Route to the World Cup Final

Speculating. It’s a dangerous game. But as one north London club’s slogan goes, “to dare is to do.” So let’s do it, let’s establish the ‘what if’ scenarios and map out England’s route to the World Cup final.

England’s men’s team haven’t won a major international trophy since 1966. But what if the 2022 FIFA World Cup is the competition to break that barren run? Who would Gareth Southgate’s men have to beat on route to a glorious victory?

We can’t predict the future, but with the help of the Opta Supercomputer, we can at least give a probabilistic estimate of what could happen.

Let’s kick-off with the group stages. England, as one of the eight teams from Pot 1, were drawn as top seed into Group B, alongside Iran, USA and Wales. On the face of it, it’s quite a kind draw, and the supercomputer’s numbers reflect that.

The machine gives England a 60.3% chance of topping Group B, and a very generous 83.8% chance of progressing through to the knockout stages. Such is its confidence in England’s superiority, that the supercomputer only gives Brazil (67.9%), Argentina (64.5%) and France (60.31%) a better chance of topping their respective groups.

Who joins England out of Group B is anyone’s guess, though, with the supercomputer seemingly on the fence about who could be the best of the rest.

But that matters not. What we’re most concerned about is England’s path through, so we will follow the numbers and assume they top Group B. Plus, since the introduction of a round of 16 stage at the 1986 FIFA World Cup, the winner of every World Cup has always won its group. So we need to assume they come top — our fictional story of England’s glory demands it.

The winners of Group B play the runners-up in Group A, a group that is slightly skewed by hosts Qatar’s presence. At the time of the draw, Qatar were ranked 51st in FIFA’s World Rankings, making them the second-lowest ranked qualified team ahead of Ghana (60th). But as hosts they didn’t have to depend on qualifiers and were placed in Pot 1.

In that group, it’s a real skirmish to see who emerges behind the Netherlands. Our predictor model gives the slight edge to Senegal, with them having a 27.5% chance of finishing second, ahead of Qatar and Ecuador.

That would make Qatar just the second hosts in World Cup history to be eliminated in the first round of the competition after South Africa in 2010. The supercomputer pays no heed to romance – when it’s all said and done Qatar 2022 will not be Qatar’s tournament – and so Senegal are favourites to progress.

The nightmare scenario for England is that something weird happens in Group A and the Netherlands slip into second place.

In our adventure though, England get drawn against Senegal in the round of 16. It would be the first time these two sides have ever met.

Senegal come into the World Cup off the back of winning the African Cup of Nations earlier this year. Manager Aliou Cisse will be coaching in his second consecutive World Cup after presiding over the team’s campaign in Russia 2018, where Senegal became the first team to be eliminated from the competition because of the fair-play rule. They were tied with Japan for second place in Group H, winning as many points, scoring and conceding as many goals, but receiving more yellow cards. It goes to show it sometimes does pay to be nice.

Although they’re no slouches – Senegal currently rank as the 18th-best nation in the world – this is an encounter that Southgate will be expecting his side to safely navigate.

Progression through this match will see England play the third quarter-final in Al Khor on 10 December. Their opposition will be…

England’s quarter-final opponents will be either the winners of Group D, or the runners-up in Group C.

As mentioned, France are the strong favourites to progress from Group D ahead of Denmark, Tunisia and Australia, while the supercomputer predicts Mexico will just squeak through as runners-up in Group C behind Lionel Messi’s Argentina, over Poland.

It’s fitting, particularly as Mexico are the champs at getting out of their group. They’ve progressed from the first-round group in each of their last eight FIFA World Cup appearances, last failing to do so in 1978. But it’s been eight editions since they last got through the round of 16 and coming up against France should be a step too far.

So, England’s likely opponents are Les Blues. And to be honest, this could well be where England’s tournament ends. Despite France’s poor performances in UEFA Nations League Group A where they finished third and went on a four-game winless run, they’ll likely be favourites in this matchup. Let’s not forget that England’s recent Nations League adventure was pretty disastrous.

France’s squad talent runs deep – it’s one of the reasons they’re second-favourites to win the whole thing in our model – and they also have pedigree at this stage of the competition.

England’s last competitive match against France came in Euro 2012 in a 1-1 draw in the group stages with Joleon Lescott and Samir Nasri, Manchester City team-mates at the time, each on the scoresheet.

The two sides’ last met in the World Cup back in 1982, as a Bryan Robson double saw England beat Michel Platini’s France 3-1 in their opening group game.

Getting through to the semi-final stage has typically been a step too far for England. Since winning their only World Cup in 1966, they have progressed past the quarter-finals just twice, doing so in 1990 and 2018.

But we’re mapping England’s route to glory here, and they have Southgate at the helm. The same man who has led England to the last four in each of his two tournaments as national team head coach.

Beating France, albeit as underdogs, will see them pitted against…

The path to the final doesn’t get any easier. England’s semi-final opponents will be whoever progresses out of the bottom quarter of the draw, likely Portugal or Germany.

Germany find themselves thrust in this year’s Group of Death, paired up with Spain in Group E. Costa Rica have previous experience in upsetting the apple cart in a group of death too – just ask England, Italy and Uruguay in 2014.

There’s some incentive to win Group E. Win that and you come up against someone like Croatia in the last 16. Come second and you likely meet Belgium from Group F. One route is evidently better than the other.

Our model has Spain just pipping Germany to the top spot, so Hansi Flick’s side will indeed get the Belgians in the first round of the knockout stage. In a game that could well be the pick of the last eight, the supercomputer estimates the Germans are more emerge from that battle.

Germany would then face Portugal. Fernando Santos’ side are favourites to top their group, and would then likely face Switzerland in the last 16.

In a heavyweight European clash, the supercomputer has Flick’s side coming out on top, and Die Mannschaft would therefore be England’s opponent in the semi-final.

England are unbeaten against Germany in their last four encounters, including that 2-0 win in Euro 2020 last summer.

With the strength of the two squads coming into the tournament, the supercomputer ever-so-slightly favours England in this hypothetical matchup.

Given Germany’s insane penalty record in World Cups – they’ve only ever missed one penalty in shootouts in World Cup history – presumably the supercomputer is predicting England to do the business in 90 (or 120) minutes.

Regardless, England make it through to their first World Cup final since 1966, demoting Germany to the ignominy of the third-fourth place play-off. In the final, Gareth Southgate’s side meet…

An absolute humdinger of a final. On 18 December 2022 in Lusail, the Three Lions will walk out against five-time winners and our tournament favourites Brazil. After winning Group G, The Seleção will likely have to navigate a colourful all-South American clash in the last 16 against Uruguay, before meeting Spain in the last eight. Spain are the supercomputer’s fourth favourites to win the trophy overall (10.0%), but when pitted against Brazil (16.8%), there’s only one winner in its eyes.

In the semi-final, Brazil’s opponents could be Argentina (who are projected to knock out Denmark and then the Netherlands).

Brazil-Argentina would be another clash laced with history. The pair most recently met in the Copa América final in 2021, where Argentina clinched their fifteenth Copa América title and first since 1993, giving Messi his first senior international trophy 16 years into his career. The supercomputer nods sagely, admits this fixture will be very close, but ultimately decides on Brazil.

England haven’t faced the Seleção in competitive action since Ronaldinho broke the hearts of school children in dining rooms up and down the country in 2002, a match in which Gareth Southgate was an unused substitute.

Twenty years on and in this timeline, he has the chance to avenge that defeat. Bring it home, Gareth.