France vs Tunisia: Prediction and Preview | The Analyst 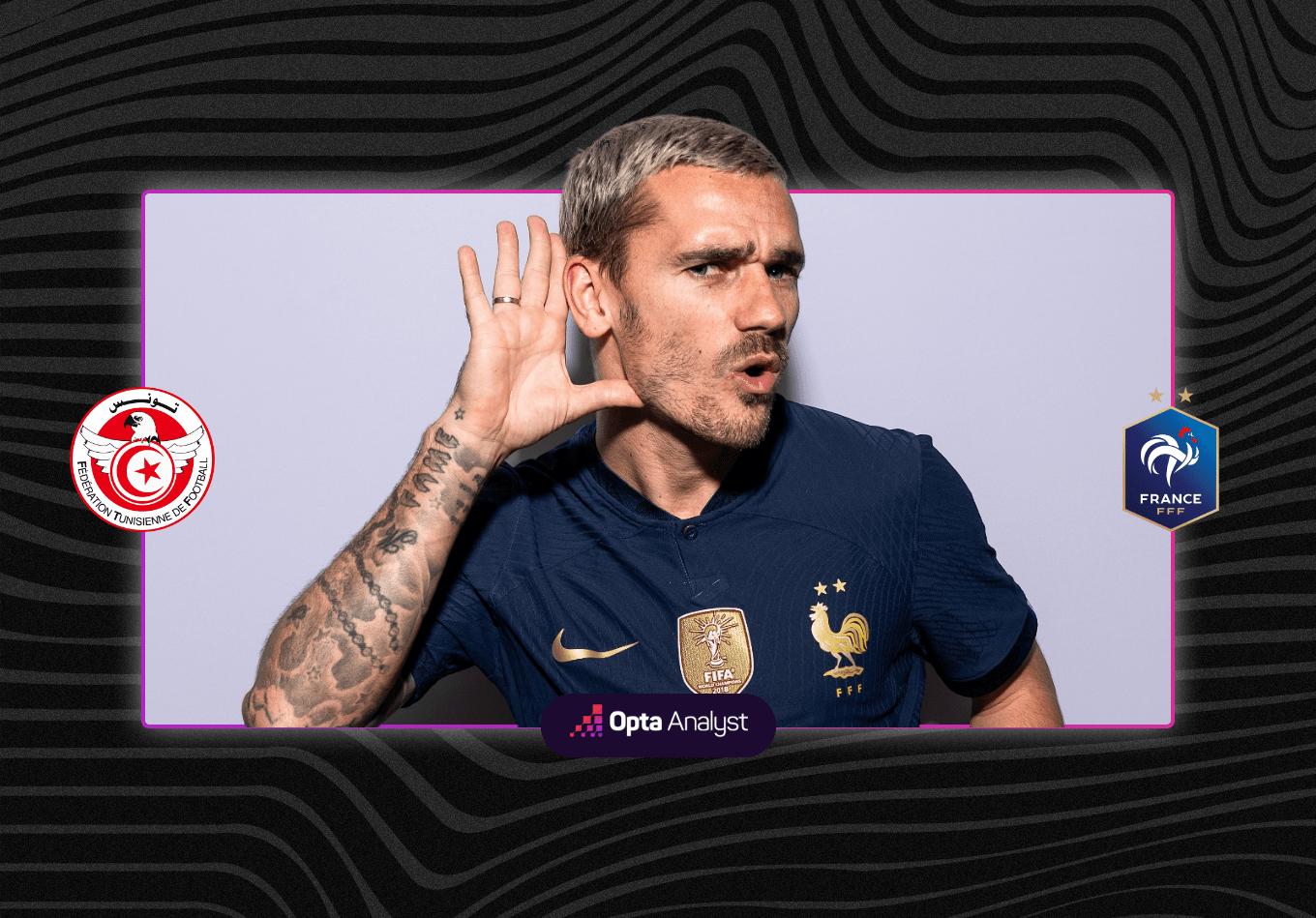 We look ahead France vs Tunisia in Al Rayyan, as both team play in their final group stage match of the 2022 World Cup.

Didier Deschamps may opt to rest some of his key players for Wednesday’s clash against Tunisia with France already through to the knockout stages of the World Cup.

Wins against Australia and Denmark mean the defending champions are almost guaranteed to finish top of Group D and, with such a packed schedule, Deschamps has the luxury of being able to leave out the likes of Kylian Mbappe, Olivier Giroud and Antoine Griezmann.

Make three predictions on France vs. Tunisia to win $500

Les Bleus had Paul Pogba, N’Golo Kante, Karim Benzema and Christopher Nkunku ruled out before the tournament started while first-choice left-back Lucas Hernandez lasted just 13 minutes of their opening game against the Socceroos before sustaining a ruptured anterior cruciate ligament, and Deschamps seems unlikely to risk more of his star men.

Hernandez has been replaced by his brother Theo, although he too may be left out against Tunisia given the lack of depth on the left side of defence.

That could mean Jules Kounde makes the move across from right-back, something the Barcelona defender would be willing to do.

Kounde said: “It’s another chance to play in the France team. I’ve always tried to do my best and play with a lot of desire.

“Left-back would be another position. I think I’ve played it once, we’ll see what the coach decides.”

Kounde got the nod at right-back against Denmark in place of Benjamin Pavard, who started France’s opener against Australia.

“It’s healthy competition,” Kounde said of his battle with the Bayern Munich man. “We try to bring the maximum when we play. I have to bring more offensively and improve technically.”

Tunisia have taken one point from their two games and have yet to score. The 1-0 defeat to Australia on Saturday was a major blow to their hopes of advancing, and they must beat France to stand any chance.

Coach Jalel Kadri is also considering changes in a bid to improve their creativity.

He said: “We lost a crucial match, but we will give everything we have in the last game.

“We don’t change the team for the sake of changing, but we make adjustments to adapt to the way the rival teams play. We will analyse our performance and fix our mistakes.”

Mbappe and Giroud may have stolen the headlines but Dembele has been a revelation down the right side of France’s attack.

Only four players have created more chances over the first two matchdays while only Argentina’s Angel Di Maria has made more successful dribbles.

Although Tunisia were largely disappointing against the Socceroos, Msakni had a fine game. The Al Arabi attacker had six shots against Australia, the most ever by a Tunisia player in a single World Cup match.

If Tunisia are to cause a stunning upset, his partnership with Issam Jebali will be key.

France are understandably overwhelming favourites to make it three wins from three Group D games. Our prediction model rates them a 62% chance to take the three points with Tunisia’s hopes rated at just 14.5%. A draw is given a 23.5% chance.