France vs. Australia: Prediction and Preview | The Analyst 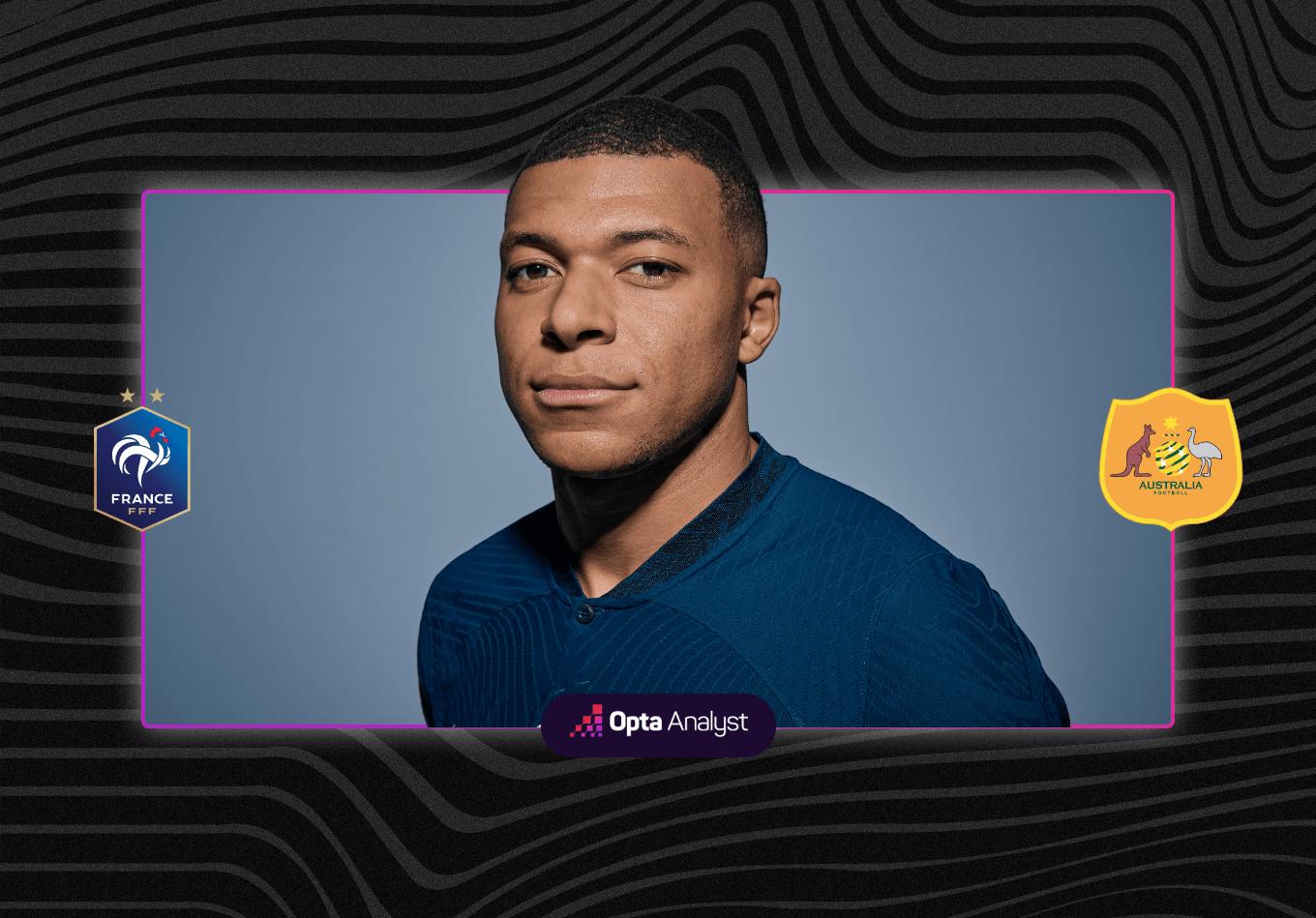 France vs. Australia: Prediction and Preview

We preview the 2022 World Cup match between France and Australia including our pre-match prediction for each team’s opening game in Group D.

Play the Opta Challenge for France vs. Australia now for a chance to win $500

France were many people’s tip heading into Qatar 2022, having been so impressive when they lifted the World Cup four years ago.

On paper, they have the sort of team that would have most players of FIFA 23 drooling. At least, they did before injuries started to pile up.

Midfield pair Paul Pogba and N’Golo Kante, both so crucial to their 2018 success, had already been ruled out, and in the days since head coach Didier Deschamps announced his squad, two more high-profile names have been forced to withdraw.

The loss of Christopher Nkunku was a blow despite the RB Leipzig forward being unlikely to start, his 48 goal involvements (37 goals and 11 assists) in 2022 is only second to France team-mate Kylian Mbappe (57 – 43 goals and 14 assists) among players from Europe’s top five leagues.

Then there was Karim Benzema’s withdrawal, a significant one considering the 2022 Ballon d’Or winner scored a spectacular 44 goals in 46 games for Real Madrid in 2021-22, helping the Spanish giants win La Liga and the Champions League.

However, if any nation can handle a double blow like that, it is surely France.

When it comes to the team selection in their opening clash with Australia, Deschamps will likely turn to the same trio he used at Russia 2018, with Mbappe starting alongside one or both of Olivier Giroud and Antoine Griezmann.

“Obviously I’ve got this target, this kind of bonus in my head to beat [Henry], but the main target as a team is to go as far as we can in the competition,” the Milan striker said at a press conference on Friday.

France will need to improve on recent form though, having only won one of their six games in the UEFA Nations League in June and September (D2, L3).

Their first hurdle is an Australia team that only made it to Qatar by the skin of their teeth, needing a dramatic penalty shoot-out win against Peru in a play-off to advance.

Dancing substitute goalkeeper Andrew Redmayne was the hero that day, but head coach Graham Arnold will need inspiration from elsewhere if the Socceroos are to improve on their World Cup record.

They have been eliminated from the group stage in four of their five previous appearances, progressing only in 2006, when Arnold was assistant to Guus Hiddink.

They have also suffered an injury blow of their own, with Martin Boyle pulling out after failing to recover from a knee problem. Melbourne City winger Marco Tilio has replaced him, and Arnold is backing the 21-year-old to step up.

“Marco has done everything that has been asked of him to be ready for this tournament,” Arnold said. “He was an important member of our Tokyo 2020 Olympic team, he has started the A-League men’s season well and he is familiar with the national team set-up and we are looking forward to what he can bring to our squad for the tournament.”

Losing players like Nkunku and Benzema is never a good thing, but the blow is softened when you can still turn to arguably the most electric attacker in world football.

Mbappe played a key role in France’s World Cup success of 2018, scoring four goals in seven games in Russia. During the tournament, the young French star not only became his country’s youngest-ever goalscorer at a World Cup (19y 183d), but also only the second teenager to score in a World Cup final after Brazilian icon Pele did so vs. Sweden in 1958.

He has also been near unstoppable for Paris Saint-Germain this season, with 19 goals in 20 games for the Ligue 1 giants.

Not just because Australia are likely to face a lot of shots against the world champions, but Ryan also brings experience that this side sorely need.

The former Valencia and Arsenal goalkeeper has not featured much for Copenhagen this season, with Kamil Grabara preferred, but he played all 11 of Australia’s third and fourth-round matches in AFC qualifying for the World Cup.

Ryan is also set to appear in a third World Cup for Australia, the most of any goalkeeper for the nation. Should he feature in all three group games, he will move level with Mark Bresciano and Tim Cahill on nine World Cup appearances, the most for the Socceroos.

Unsurprisingly, France are relatively overwhelming favourites to start with a win.

According to our supercomputer, Les Bleus have a 73.4% chance of taking all three points, with Australia given just a 10.6% chance.

The draw comes in at 16.0%, which cannot be discounted given France’s injuries and questionable form heading into Qatar.