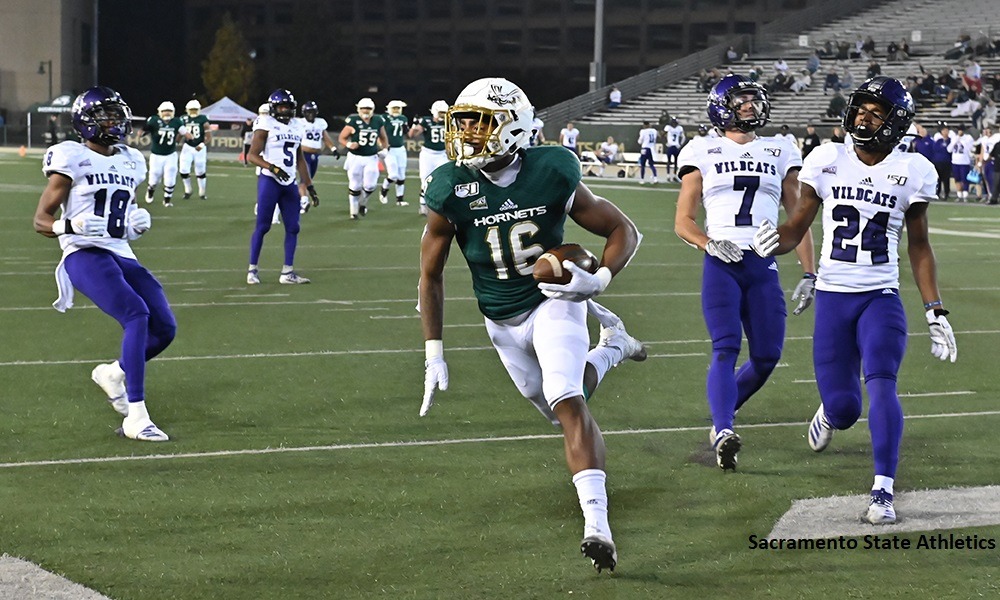 FCS Football Preview and Predictions: Week 10 Games of the Week

Even better, does anybody still reference divisions with the NBA and NHL?

What’s great about college sports is conference championships remain important. It’s not just big picture – teams want to beat their rivals and win in their backyard.

Here are some of the best games in Week 10 across the FCS (all times ET on Saturday unless noted):

Notable: Incredibly, both teams are involved in top-15 matchups for the third straight Saturday. Sac State, the Big Sky’s co-leader with Montana State, has a 16-game conference winning streak since a 36-17 loss to Weber State on Nov. 2, 2019. Running back Cam Skattebo has 100+ rushing yards in four straight games and six of eight for 985 overall yards this season, while co-quarterback Asher O’Hara has rushed for 610 yards as well as a touchdown in every game (14 overall). Nine of the Hornets’ 14 turnovers have occurred in the last three games. Weber State’s defense just limited Montana to 114 yards and ranks second in the FCS in yards allowed per play (3.9) and seventh in yards allowed per game (285.5). The Wildcats spread the carries: Damon Bankston (team-high 501 yards) and Dontae McMillan (75+ yards in four straight games) have led the way with Josh Davis missing three straight games due to an ankle injury.

Notable: PVAMU QB Trazon Conley, the reigning SWAC offensive player of the week, has posted consecutive games over 100 rushing yards and scored seven TDs in that time while the Panthers have retaken sole possession of first place in the West Division. Alcorn’s 35-6 loss at Grambling State was its largest against a SWAC opponent since a 40-point defeat against Alabama State in 2012, and now the Braves are seeking to avoid their first four-game losing streak since that same game.

Notable: Exactly one year after suffering its most recent loss at Dartmouth, Princeton will seek to extend an FCS-leading nine-game winning streak. Freshman RB Ryan Butler has rushed for at least one TD in every game (10 overall) and wide receiver Andrei Iosivas has 150+ receiving yards in three of the last four games. The Tigers also are an FCS-best +17 in turnover margin. Having just three returning starters has caught up to Dartmouth’s defense, which is allowing more points (23.4) and yards (375.7) per game than in any season since 2009 and ’14, respectively.

Notable: UTM is 5-1 against FCS opponents with an 18.7-point average margin of victory. RB Zak Wallace is coming off a career-best four TD runs against Houston Christian and has 29 in 21 games since the start of the 2021 season. KSU, behind its triple option attack, has won time of possession in all eight games, ranking No. 3 nationally with a 35-minute, 1-second average.

Notable: Howard sits in first place in the MEAC, but NCCU can move ahead with a victory, and it’s outscored three opponents at home by 159-34. The starting QBs, Howard’s Quinton Williams and NCCU’s Davius Richard, shared the conference’s Week 9 offensive player of the week award. Howard safety Kenny Gallop Jr., who ranks second in the MEAC in tackles, has 33 (27 solos) in the Bison’s last three games.

Notable: This game could go end line to end line with EWU coming off a season-best 568 offensive yards yet also ranking last in the FCS in both yards (522.3) and rushing yards allowed per game (297.5). The Vandals are 3-0 at home and have beaten EWU in their last two meetings inside the Kibbie Dome. In four October games, Idaho WR Hayden Hatten caught eight TDs and had 100+ receiving yards three times.

Notable: The Southland’s conference schedule is only six games instead of seven, so this is a pivotal matchup. Behind QB Zachary Clement, NSU has won the three games with its highest point and yard totals. TAMC’s Eric Rodriguez ranks second in the Southland in passing yards per game (241.8), TD passes (15) and pass efficiency (160.9).

Notable: UNH, the CAA leader, is coming off a bye. RB Dylan Laube’s 171.6 all-purpose yards per game rank third in the FCS. Richmond QB Reece Udinski’s 77.1 completion percentage (239 of 310) is better than the FCS single-season record (75.2, Northern Iowa’s Eric Sanders in 2007). He’s been dissecting opponents with the only FCS trio that has 40+ receptions each (WRs Jasiah Williams, Jakob Herres and Leroy Henley).

Notable: The host Toreros are seeking to avoid consecutive PFL losses for the first time since 2010, but they have a nine-game winning streak over Butler. QB Judd Erickson has averaged 326 passing yards and three TD passes in his last two games. Butler counterpart Bret Bushka has produced the most TDs (19) among PFL QBs and ranks second in total offensive yards per game (275.6).

Notable: EKU beat UCA with the fourth-biggest comeback win of the 2021 season – 22 points, from 35-13 down with 3½ minutes left in the third quarter to 38-35. QB Parker McKinney has passed for a TD in 14 straight games and an EKU-record 61 in his career. UCA RB Darius Hale is scolding hot with 691 yards from scrimmage (595 rushing) and six TDs in his last three games.

Notable: With a win, SDSU will clinch at least a share of the MVFC title, and would secure the automatic bid to the FCS playoffs. QB Mark Gronowski has accounted for nine TDs (passing and rushing) in his last two games and 23 in the Jackrabbits’ eight wins. Their defense ranks second in the FCS in fewest yards allowed per game (260.6). UNI’s improved rushing this season has opened up the passing for Theo Day (2,471 yards, 19 TDs). Matthew Cook’s 64 career field goals are tied for the UNI and MVFC all-time records, and he’s 113 of 113 on PATs.

Notable: TSU’s OVC loss at Murray State last Saturday was damaging, and it’s lost four straight games against SEMO by an average of 23 points. The Tigers features two RBs, Jalen Rouse and Devon Starling (a combined 892 yards), but the rushing attack has been inconsistent. Meanwhile, SEMO RB Geno Hess (3,339) is 55 rushing yards shy of the school’s all-time record. WR Ryan Flourney tied for the FCS season high with 15 receptions against Eastern Kentucky, and they went for 256 yards and a TD.