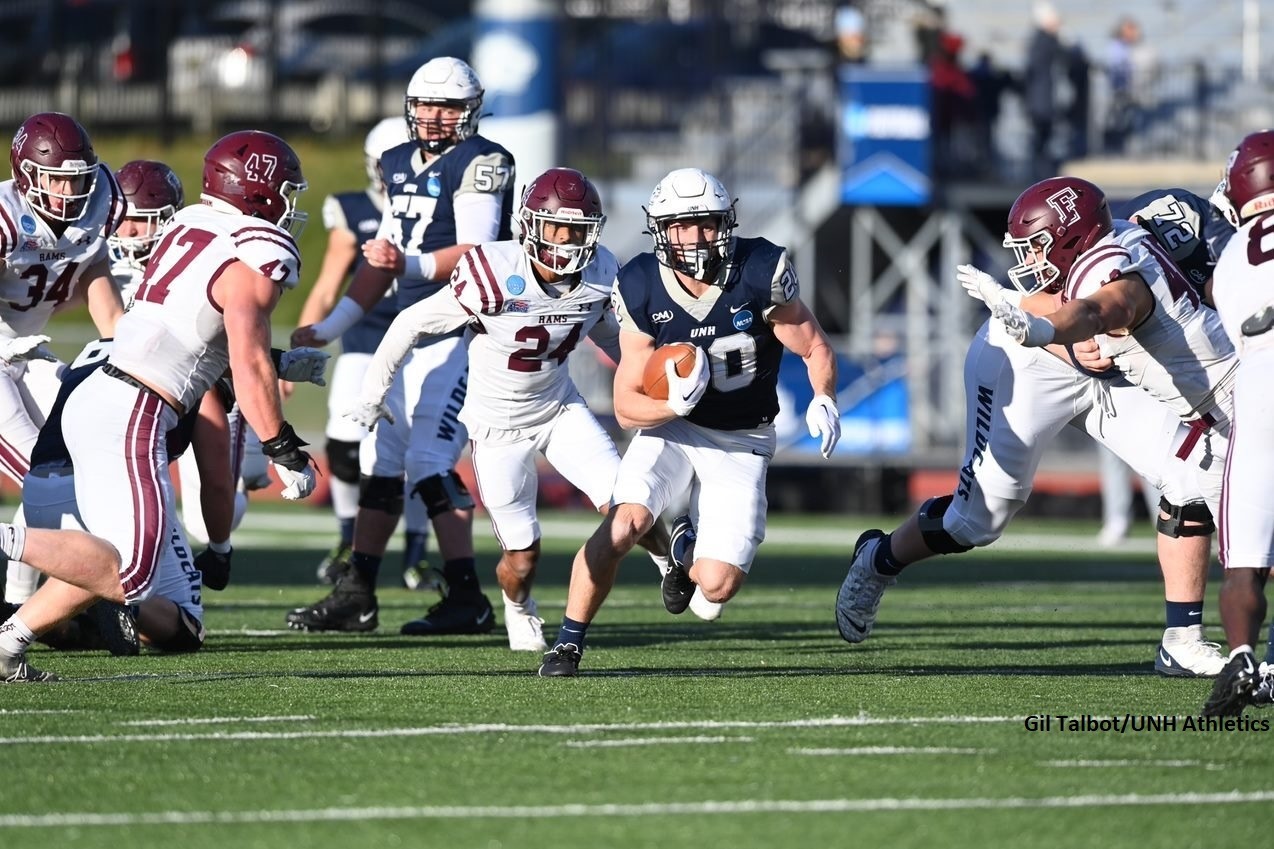 Most of the offenses were ready for the start of the FCS playoffs: All eight teams that won first-round games scored over 30 points, and three teams lost games despite surpassing 40 points.

CAA Football and the Big Sky, the two conferences with the most teams in the 24-team field at five each, picked up multiple wins. The CAA went 3-1 and the Big Sky 2-1 after Montana ended the action with an impressive comeback win.

Following is a review of the first round:

Quick Synopsis – Furman beat Elon in the first round for the second time (also 2017), taking control of their seventh straight win by scoring touchdowns on consecutive possessions in the first half. Quarterback Tyler Huff accounted for 233 yard of total offense and two TDs.

Game Ball – The Paladins defense receives a collective honor after allowing the fewest points in the Southern Conference program’s 35-game playoff history. It limited Elon to 77 rushing yards (the Phoenix had been averaging 159 yards), sacked Matthew McKay four times with five other QB hurries and had two fumble recoveries. Linebackers Bryce McCormick and Braden Gilby led with seven tackles each, and defensive tackle Xavier Stephens was in on 2.5 sacks.

Key Stats – The Paladins rushed for 251 yards, with Dominic Roberto posting a game-high 98 yards and going over 1,000 for the season. In the loss, Elon’s Skyler Davis kicked 52- and 51-yard field goals to tie the FCS single-season record with seven of 50+ yards (accomplished two previous times).

Quick Synopsis – In their first meeting in over 49 years, Richmond scored on five of its first six possessions to overwhelm Davidson. Quarterback Reece Udinski was 28 of 31 for 246 yards and two touchdowns, setting an FCS single-game playoff record for completion percentage (90.3) with at least 15 attempts.

Game Ball – Udinski, the All-CAA first-team quarterback, posted his fourth game of the season with over an 80 completion percentage on 30+ attempts. He threw 25- (Jakob Herres) and 30-yard TDs (Jerry Garcia Jr.) in the second quarter.

Key Stats – Davidson, which has been outscored by a combined 138-35 in three straight playoff appearances, entered as the FCS leader in rushing yards per game (350.5), but finished with just 123 (the fewest of coach Scott Abell’s five seasons) on 40 carries. Richmond converted 10 of 15 third downs compared to the Wildcats going 2 of 12.

Quick Synopsis – Nolan Henderson had a hand in Delaware’s first five touchdowns, throwing three scores to wide receiver Chandler Harvin, while the Blue Hens built a 35-3 lead en route to the most points in their 41-game playoff history. They were coming off two losses to end the regular season.

Game Balls – UD’s offensive and defensive leaders stood out with Henderson passing for 266 yards and four TDs with another score on the ground, and linebacker Johnny Buchanan collecting a game-high 15 tackles (his fifth game of 15+ stops this season).

Game Ball – Laube set the tone by scoring on 87-yard catch and run from Max Brosmer just over four minutes into the game. He had 29 carries for 157 yards and three TDs, caught four passes for a career-high 127 yards and a TD, and added 119 kickoff return yards and 21 punt return yards.

Key Stats – UNH outgained the Rams 664-557 and held an 11-minute, 6-second edge in time of possession. As good as DeMorat’s statistics were for many quarterbacks, the passing yards were his second-fewest of the season and the TD passes matched his season low.

Quick Synopsis – In a game played in rain, sleet and snow, Weber State built a 38-17 lead through three quarters and then held on after UND’s Tommy Schuster threw two of his three touchdown passes in the fourth quarter. Josh Davis (129) and Damon Bankston (122) led a 330-yard ground assault as the Wildcats reached a double-figure win total for the fourth time since 2017.

Quick Synopsis – The Runnin’ Bulldogs lived up to their nickname with 405 rushing yards in their first-ever playoff game, and coach Tre Lamb’s squad was the only road team to post a first-round win. Running back Narii Gaither led the way with 245 yards and two touchdowns, while quarterback Bailey Fisher rushed for three scores (each 10+ yards) and threw for one more.

Game Ball – While Gaither entered the game with 11 career games of 100+ rushing yards, he was 94 yards over his previous best as he set career highs in carries (28) and rushing yards (245).

Quick Synopsis – After falling behind 35-31 in the fourth quarter, Southeastern Louisiana responded with a touchdown drive that was capped by Carlos Washington’s one-yard run followed by Zy Alexander’s 44-yard interception return for a score just over one minute later. Idaho’s Ricardo Chavez slipped on a potential game-tying field goal, pulling it wide left with six seconds remaining.

Key Stat – The Lions didn’t commit a turnover, while Idaho had three, and each was costly: Hatten’s fumble in SLU territory, a Donniel Ward-Magee interception of Vandals quarterback Gevani McCoy at the Lions’ goal line and Alexander’s fourth-quarter pick-six.

Quick Synopsis – Trailing 24-3 in the third quarter, Montana scored the final 31 points, including two touchdowns on special teams in a 4½-minute span of the third quarter. The comeback evoked memories of the Big Sky program’s 2009 team that trailed South Dakota State by 21 points in the third quarter of a first-round game and finished with 47 straight points for a win.

Game Balls – Record-setters played a big part of UM’s win. Malik Flowers got the comeback started with an 80-yard kickoff return for a touchdown, pulling his team within 24-10 and tying the FCS mark with his seventh career kickoff return TD (Weber State’s Rashid Shaheed also had seven from 2017-21). Safety Robby Hauck, the son of UM coach Bobby Hauck, had 15 tackles to push his career total to a Big Sky-record 474 (one more than Eastern Washington’s Ronnie Hamlin from 2011-14).

Key Stats – Turnover margin is often referenced when a team loses a game, but SEMO held a +1 margin. The Redhawks had other types of meltdowns, posting season highs in penalties (11) and penalty yards (110), and being outgained 202-87 in return yardage, including UM’s Junior Bergen’s 58-yard punt return touchdown that tied the game 24-24.