England vs. Iran: Prediction and Preview | The Analyst 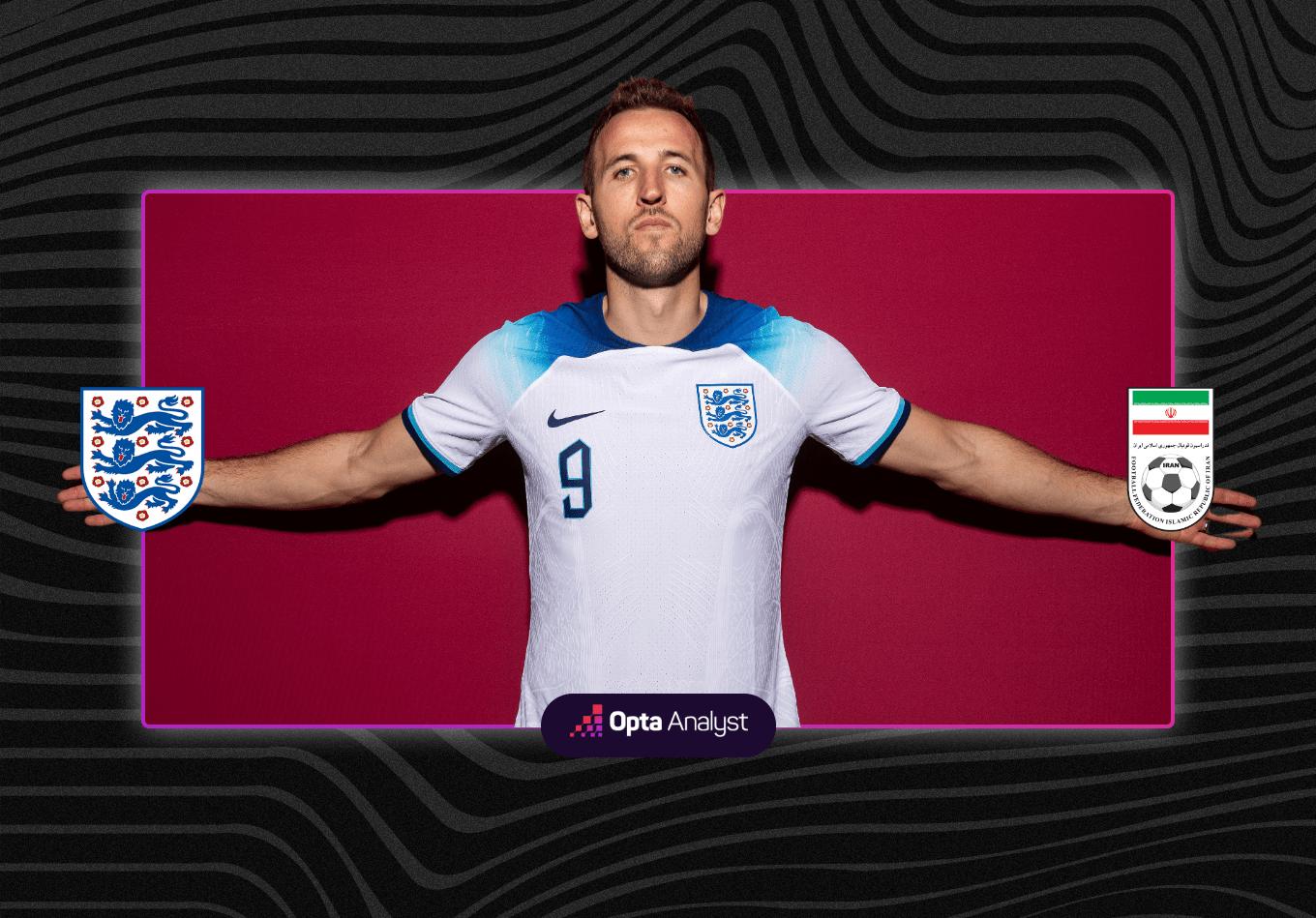 England vs. Iran: Prediction and Preview

We preview the 2022 World Cup match between England and Iran, including our pre-match prediction for Group B’s opening game.

Play the Opta Challenge for England vs. Iran now for a chance to win $500

Most people may assume England’s World Cup opener against Iran will be a relatively routine one.

The Three Lions reached the semi-finals in 2018 before making it all the way to the final of last year’s rearranged Euro 2020 tournament, and breezed through qualifying for Qatar 2022 with the best goal difference in the group stage of European qualifiers, scoring 39 and conceding only three.

Confidence will be high that Gareth Southgate’s team can get going with three points, but a potentially tricky obstacle stands in their way on Monday.

Iran had an impressive qualifying campaign of their own, winning eight of 10 games in the third round of Asian qualifying and conceding just four goals.

They also sit 20th in the latest FIFA rankings, putting them above the likes of Serbia, Morocco and Poland.

Far from ideal as part of their preparations was a change of head coach just two months before the World Cup, with Dragan Skocic surprisingly removed and replaced by Carlos Queiroz to lead Team Melli in Qatar, shortly after he had guided Egypt to the final of the Africa Cup of Nations earlier this year.

This will be Queiroz’s fourth consecutive World Cup as a head coach – the longest ongoing run – and third in a row in charge of Iran after taking over for a second spell.

Iran lost 2-0 to Tunisia in a behind-closed-doors friendly on Wednesday, but Queiroz felt it allowed his team to be better prepared for England.

“We had the best opportunities in the game before the penalty, we missed a few chances to score but the most important is the conclusions that we need to make in order to prepare for England.”

Iran are one of 20 teams to have featured at each of the last two World Cups in 2014 and 2018 – of those teams, they have had the fewest shots (47), the fewest shots on target (10) and scored the fewest goals (three) in the group stages across those two tournaments combined.

Meanwhile, England’s Eric Dier is not concerned about the high temperatures in Qatar despite the time of year, with the game kicking off at 4pm local time.

“I don’t know what kind of impact it will have,” he said at a press conference on Saturday. “I’ve never experienced it before, so it’s going to be a first.

“This is normally a tournament which is played in the summer. In Russia [in 2018] it was hot. I wasn’t there but during the Euros in England it was hot, so I think we’re ready for that and we’re playing in the same conditions as our opposition, so it’s the same for everyone.”

England are the only European team to have reached the semi-finals in each of the last two major tournaments, and will be hoping to start on course for another strong showing at the Khalifa International Stadium.

England’s captain has understandably been integral to their last two runs in the World Cup and European Championship, winning the golden boot at the last FIFA showpiece in 2018, where five of his six goals in Russia came in the group stage.

Kane was also joint-top scorer in European qualifying for this World Cup (12, level with Memphis Depay), and his shot conversion rate of 36.4% was the highest of any player who scored at least six goals.

The consensus seems to be that Sardar Azmoun will be the one for England to keep an eye on, which is fair enough given his 40 goals in 63 games for his country to date, though his lack of goals and game time at club level could cost him sharpness, having scored just once in 22 appearances for Bayer Leverkusen since joining in January.

On the other hand, his international strike partner Taremi has 13 goals in 19 games for Porto this season, including five in the Champions League. Overall, across the Portuguese Primeira Liga since 2019-20, the Iranian has scored 60 goals in 109 games across spells with Rio Ave and Porto – 16 more than any other player in the competition over that period.

Despite only playing six times, no Iran player was involved in more goals during the third round of Asian World Cup qualifying than Taremi (four goals, two assists).

Despite Iran probably being stronger than many anticipate, England are still justifiably heavy favourites.

According to our supercomputer’s prediction model, the Three Lions have a 72.2% chance of opening with a win, while the draw is rated at 18.1%.

It would be a moment to remember should Iran pull off an upset, but Queiroz’s men have just a 9.7% chance of victory.