England 0-0 United States: The England Perspective & the US Perspective 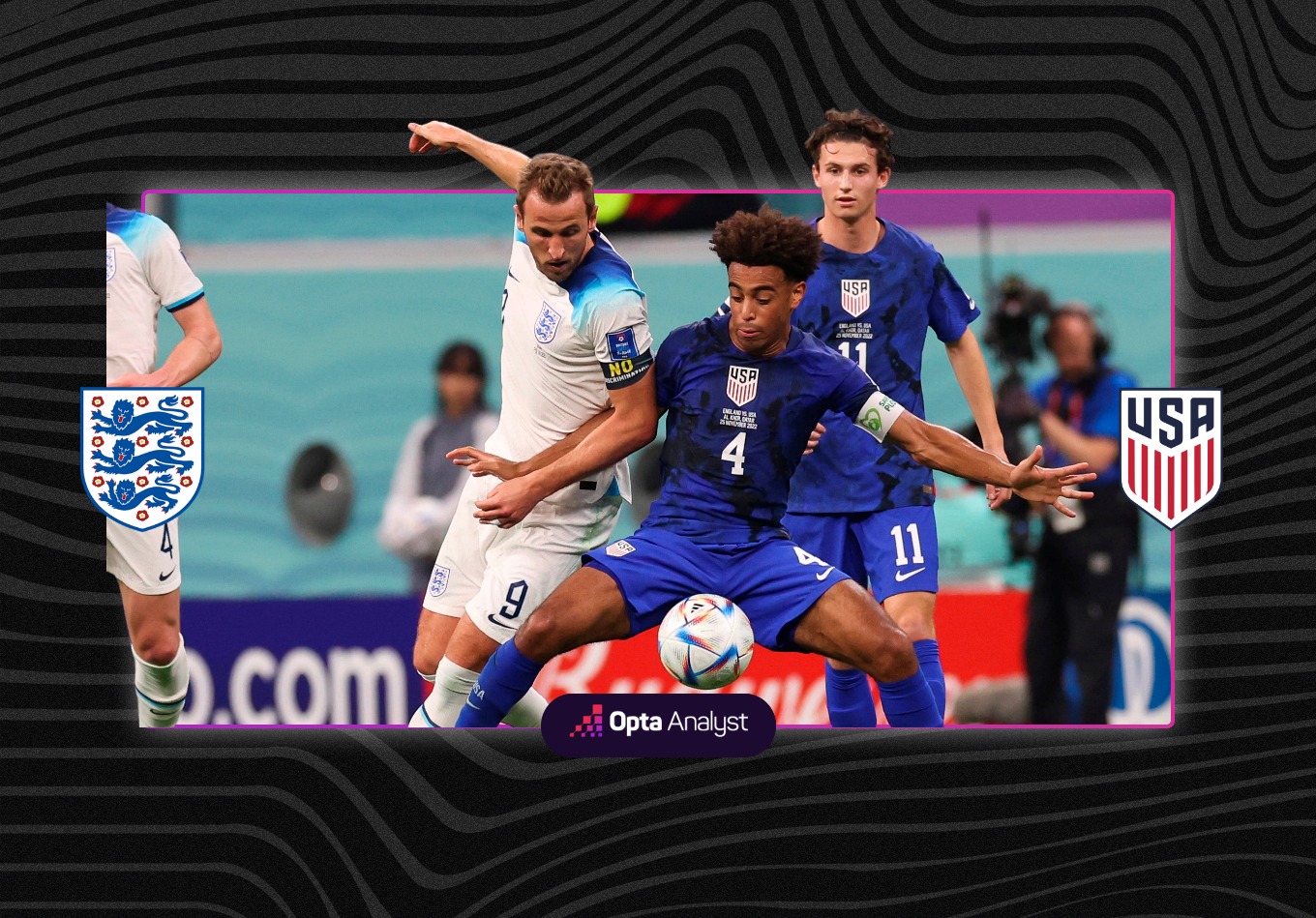 England 0-0 United States: The England Perspective & the US Perspective

We’re used to games at the 2022 World Cup starting slowly but England seemed to take this as an instruction rather than a trend, labouring through the opening 45 minutes and letting the USA grow into the game like an eager nephew. Like both Iran and the Netherlands earlier today, England demonstrated that making sweeping judgements after only one game at a World Cup is – unless you’re Brazil – a fool’s errand.

In many ways England’s first half was reminiscent of their second game at the Euros last year, held 0-0 with a historic rival (Scotland in that case) in a contest that lacked in tempo or effective possession. Harry Kane had a blocked shot after 10 minutes, a period that was also livened by Harry Maguire dribbling into the box like a sort of futuristic John Barnes, but it was the USA who enjoyed the best chances, with an unmarked Weston McKennie firing over after 26 minutes and then Christian Pulisic tonking the bar seven minutes later. No team has hit the frame of the goal more often in the World Cup group stage than the USA since the World Cup they hosted in 1994 (13, tied with Germany). Diana Ross please take note. What the USA had taken note of was Jude Bellingham’s performance in England’s first game, and by pressing him with intent for the whole half, they nullified their glamorous opponents including the wonderboy wearing 22.

The half ended with a decent long-range effort from Mason Mount that Matt Turner turned wide, and which gave England a slight advantage on xG but in truth it was America’s half. A fourth successive World Cup game without a goal conceded in the first for the USA. These American boys know how to start games.

Would the second half see an improvement? Not really. Its opening stages were much like being the nation of Austria, in that Gareth Southgate was well-aware that subs exist, but just didn’t deem them necessary. Halfway through the second period and captain Kane had had more touches in England’s own box than America’s. The first four shots of the half were all produced by the USA, and England fans spent more time staring at the touchline, waiting for any sort of decisive movement from the fourth official. Finally, on 68 minutes, Jordan Henderson and Jack Grealish were introduced, both of whom improved the side somewhat.

Even as the Americans tired, Gareth Southgate’s team were unable to fashion any chances. It took England until the 87th minute to record a second-half shot, via substitute Marcus Rashford, before they closed out the game with headers from Harry Maguire and a sluggish Harry Kane. Maguire was England’s best player, often the only defender to truly sense the eager and muscular threat from the USA. Even so, the fact that Maguire and John Stones passed the ball between each other 55 times is an indicator of the excellent job the USA did on cutting off England’s progressive passing channels.

The best teams accept they are stymied and find another way, but there wasn’t much evidence England could do this tonight, or, perhaps, were allowed to.

Do England have heritage at the World Cup? Yes, they do. They decided not to play in the first three, lost to the United States the first time they turned up and have now recorded 12 goalless draws, three more than any other nation in the competition’s history. At 95:55, this was the shortest game at the 2022 World Cup and all we can really say to that is: thank goodness.

The United States’ first half against Wales was exactly what this team needed after an underwhelming – and occasionally depressing – run up to the World Cup. For the first 15 minutes against England, it seemed like a regression might be in the works.

Coach Gregg Berhalter made one change from the Wales match with Haji Wright coming in for Josh Sargent, and in terms of formation they went not with a 4-3-3 but a 4-4-2 with Wright and Timothy Weah up top, Christian Pulisic on the left and Weston McKennie on the right of the midfield four.

In the opening 15 minutes, the U.S. were making it rather easy for England to get into the box with three early shot and a bit too much threat coming up the right side with Bukayo Saka. That wasn’t going to fly for 90 minutes, but the U.S. really grew into the match from there. The front two sat off England centre backs John Stones and Harry Maguire and settled for winning the ball back in the midfield.

Berhalter’s side’s first chance came against the run of play with an Antonee Robinson transition out, then Pulisic switched fields allowing for a free cross in from the right by McKennie to Wright who headed well wide. Not great, but more was to come.

Weah soon thereafter delivered a cross from the right to McKennie, who took a one-time shot over off a short bounce for their best chance yet after some nice possession on the right that built out of playing advantage after a foul on Pulisic in the midfield. It was perhaps the best example of them linking up in the final third, which, in general, went rather well with 78.4% passing accuracy in the first half and 77% for the match in those advanced positions. For context, England were at 72.8% and the tournament average is 67.8%.

But the best chance for the U.S. involved the woodwork. In the 32nd minute, McKennie linked with Yunus Musah, who found Pulisic on the left, and the Chelsea winger rung the crossbar after beating Jordan Pickford.

A few impressive sequences aside, that doesn’t mean there weren’t moments they should have done better. Sergiño Dest was wasteful with two straight opportunities in space coming up the right side around 20 minutes and then again at 40 minutes electing to keep the ball in transition and shoot into two defenders rather than playing it into the middle for Wright.

McKennie was perhaps the player with the strongest first half aside from the miss. He led the U.S. in first-half touches (33) and completed a team-high eight of his nine passes in the final third, and he finished completing 12 of 13.

The U.S. haven’t conceded a first-half goal in any of their last four World Cup matches, but second halves haven’t been so kind. It wasn’t against Wales as the U.S. came out flat and lost a lead they deserved to have, but after 90 minutes a draw was what they deserved and what they got.

It seemed the U.S. learned something against Wales and decided to play football for minutes 46-90. Or at least until around the hour mark. They won five corners in the first 20 minutes of the second half, just did nothing with them and the 55% possession they enjoyed in that period.

Things slowed down for the U.S. around 70 minutes. They didn’t quite “go for it” in the second half, but there’s something to be said for a clean sheet against a side with the attacking talent of England – especially for a U.S. side that entered the tournament with question marks at centre back. That partnership cost the U.S. a penalty against Wales, but they weren’t put under a massive amount of pressure by Harry Kane and Co. That’s a credit to Tyler Adams and the U.S. midfield. Adams finished with more possessions won (eight) than anyone else on the pitch, and the midfield as a whole is proving itself a capable one even if the finishing isn’t quite there.

It’s the United States’ first clean sheet in a World Cup in their last seven matches and just their sixth in 36 World Cup matches in total. Of those six, three have come against European opponents – two being England.

So the United States remain unbeaten against England in World Cups with a win and two draws – and maybe it’s OK to be happy about that for a few hours – but they also remain winless in this World Cup with plenty of work to do on Matchday 3 against Iran. Recall, England are still leading Group B with four points. And Iran are second with three.

Two points never got anyone anywhere, and no one should remember this one if it isn’t ultimately one of five.