Denmark vs. Tunisia: Prediction and Preview | The Analyst 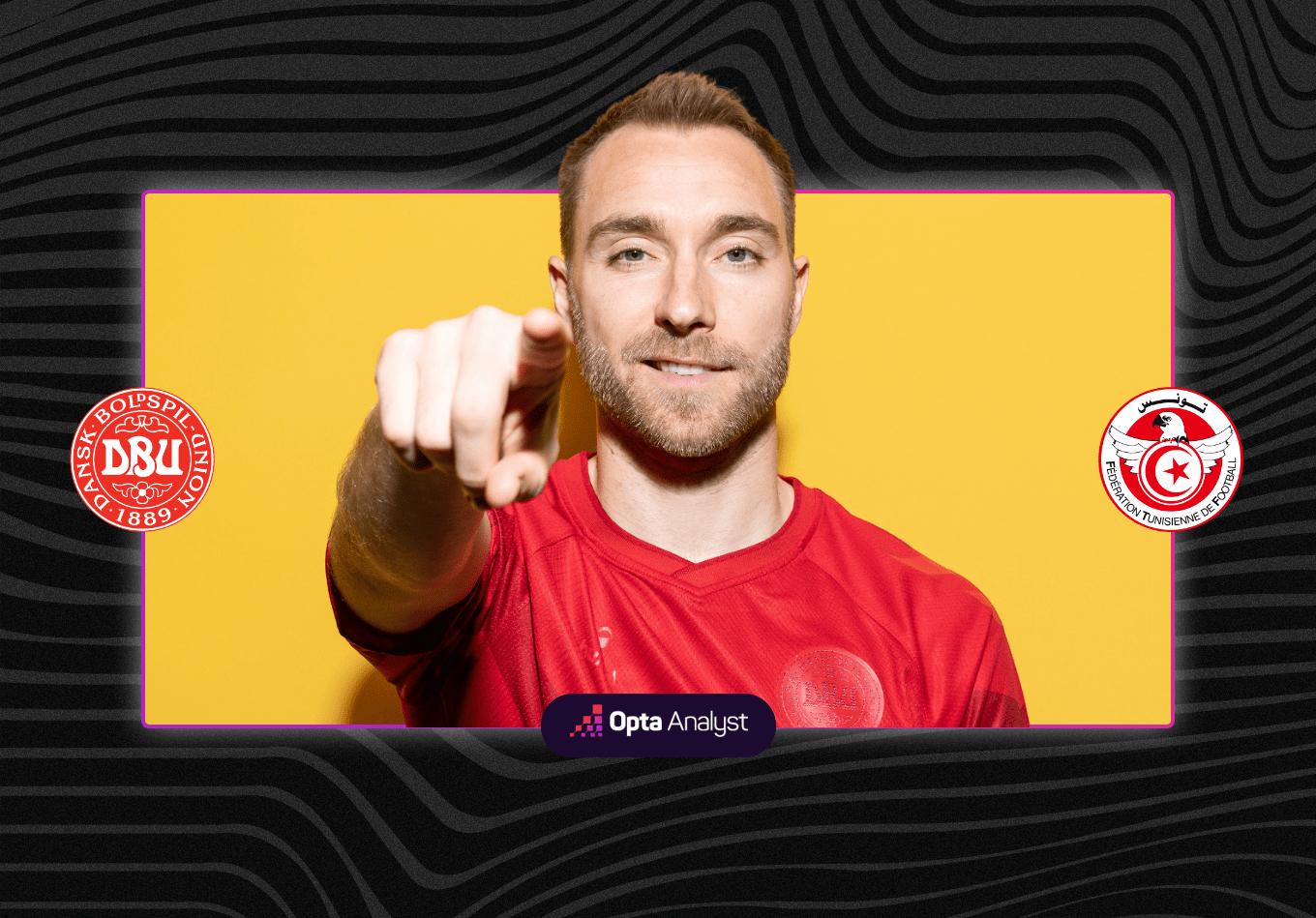 Denmark vs. Tunisia: Prediction and Preview

We preview the 2022 World Cup match between Denmark and Tunisia including our pre-match prediction for each team’s opening game in Group D.

Play the Opta Challenge for Denmark vs. Tunisia now for a chance to win $500

Denmark were the surprise package at Euro 2020 and by the end of the group stage, were also everyone’s second team.

This was partly due to their impressive performances, recovering from losing their first two group matches to thrash both Russia and Wales, before beating the Czech Republic to reach the semi-finals.

Denmark ultimately lost to England in the final four, but there was another reason why non-Danes had developed a soft spot for the team.

The harrowing scenes in their opening defeat to Finland in Copenhagen as medics attempted to revive Christian Eriksen on the pitch after he collapsed left those watching hoping for the best outcome for the player and his team-mates, who created a barrier around him.

Thankfully, not only did Eriksen survive, but he has since returned to the top level of the game, coming off the bench against the Netherlands in March to a standing ovation before finding the back of the net just two minutes later.

The Manchester United midfielder’s presence will be symbolic and inspirational in Qatar, but head coach Kasper Hjulmand is under no illusion that his team will need to rely on more than positivity, saying: “I think we’re in a good position, but you cannot just go on emotions and play. We will need to have quality on the pitch.

“I think that the football quality is there and we’re ready.”

Denmark were no one-tournament wonders either, sailing through their World Cup qualifying group, winning their first nine games and keeping clean sheets in their first eight, more than any other team.

One player Tunisia will need to keep an eye on is full-back Joakim Maehle. No player scored more goals for Denmark in qualifying than he did (five – level with Andreas Skov Olsen), while no player was directly involved in more goals for the nation during Euro 2020 than the Atalanta man (three – two goals and one assist).

They will have a tough job against Tunisia though, with the Eagles of Carthage experts at keeping games tight and stopping the opposition from playing.

Jalel Kadri was appointed as head coach after their disappointing quarter-final exit to Burkina Faso at the Africa Cup of Nations, and started by beating Mali over two legs to qualify for Qatar 2022 and winning four of their next five games, before a 5-1 friendly humbling at the hands of Brazil in September.

He has set high standards for himself, recently saying: “If we do not reach the knockout phase of the 2022 World Cup, I will leave. I have a contract based on results and being eliminated from the group stage will be a failure for me.”

While Tunisia will not be easy to break down, their record at World Cups will need to improve if they are to make any mark on the tournament.

Their record against European opposition also leaves a lot to be desired, having played the most games against European opponents at the World Cup of any side without winning (D3 L7). In fact, each of their last four defeats in the competition came against teams from Europe (Spain and Ukraine in 2006, England and Belgium in 2018).

The Tottenham man has developed into one of Europe’s premier deep-lying midfielders, and will provide the drive in the middle next to Eriksen’s more refined skill.

In the Premier League this season, only Manchester City’s Rodri has attempted more than his 925 passes, while in Europe’s big five leagues, only Pedri (seven), Lionel Messi, Mario Gotze (both six), Joshua Kimmich and Harvey Barnes (both five) have recorded more than Hojbjerg’s four secondary assists (the pass before the assist).

The former Sunderland and Saint-Etienne forward has been the main man for his country on the big stage, and will be needed to show off his talents again in Qatar.

Khazri has been directly involved in each of Tunisia’s last four goals at the World Cup (two goals, two assists), and also had three goal involvements at the Africa Cup of Nations earlier this year (two goals, one assist).

Possibly due to the form of the Danes and Tunisia’s poor record at World Cups, Hjulmand’s men will be clear favourites at Education City Stadium.

According to Stats Perform’s AI model, Denmark have a 65.0% chance of victory, with Tunisia at just 13.9% to win.

The draw, rated at 21.1%, seems possible given Denmark’s lack of a proven goalscorer and their opponents’ ability to close games down.