Denmark 0-0 Tunisia: Goalless, but Far From Drab | The Analyst 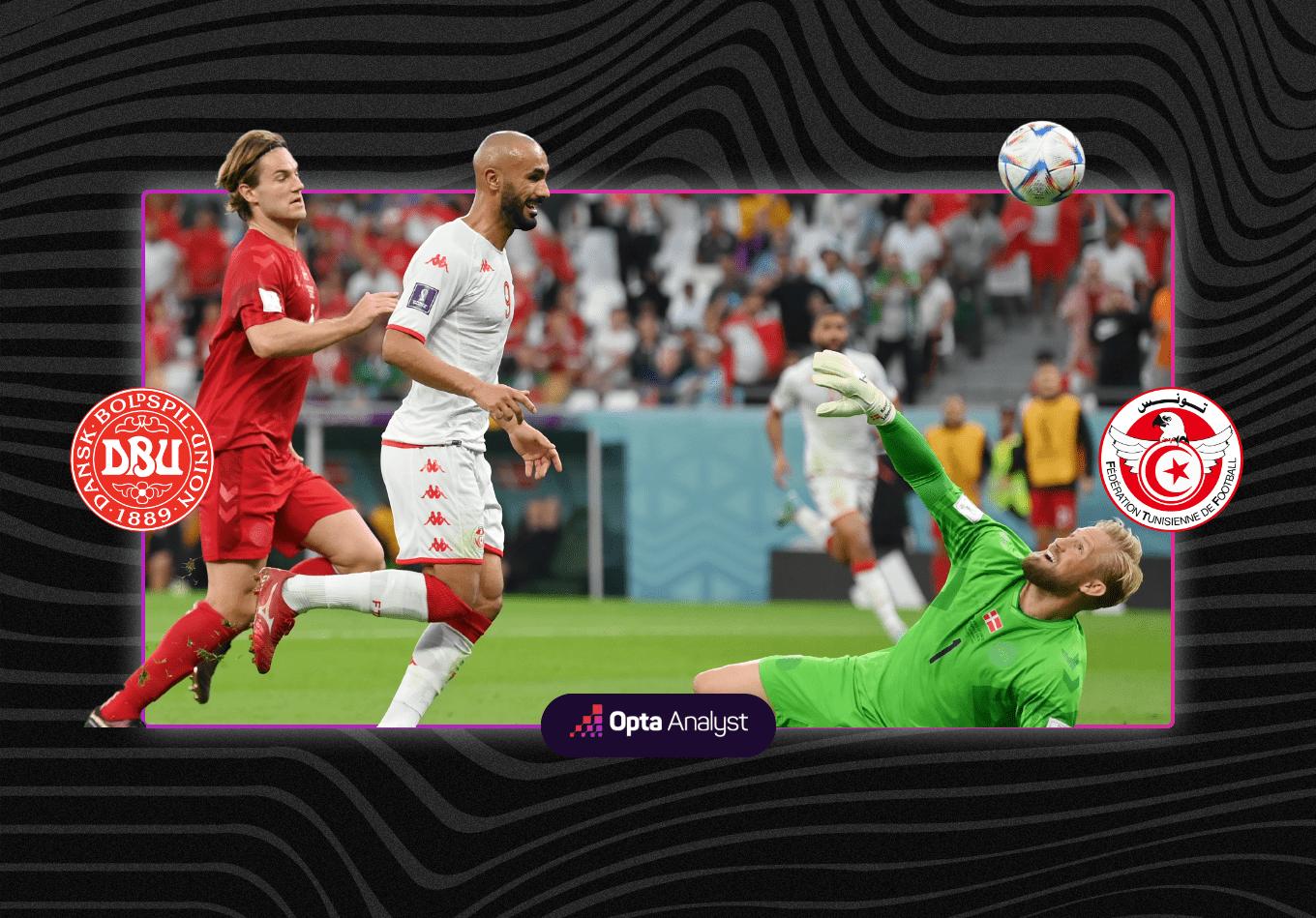 Euro 2020 semi-finalists Denmark arrived at the 2022 World Cup existing somewhere between dark horses and genuine contenders – grey horses, if you like. Tunisia almost certainly needed to avoid defeat to stand any chance of progressing from a group also containing reigning world champions France. What ensued was the first 0-0 of the tournament – far from a drab one, though.

Denmark qualified for Qatar with a record of eight clean sheets in 10 games – more than any other UEFA nation – but Tunisia – who scored five goals in their three group matches at the 2018 World Cup – provided plenty of penetration during the opening 45 minutes, carving out eight shots (to Denmark’s three) totalling 0.76 expected goals. They came closest to taking a surprise lead when Kasper Schmeichel miraculously denied Issam Jebali’s close-range effort.

Across his two World Cup tournaments for the Danes, Schmeichel has saved 20 of the 22 shots on target that he’s faced and prevented an excellent 3.7 goals based on Opta’s xGOT model, and he was a key factor in Denmark’s point today, again.

The Eagles of Carthage – who had kept just one clean sheet in their previous 15 World Cup outings – complemented their incisive attacking output by reminding Denmark what a robust rearguard action looks like, limiting their fancied opponents to a mere 0.18 xG. Really, the tone had been set when midfielder Aissa Laidouni celebrated a hawking tackle on Christian Eriksen (back in major tournament action after suffering a cardiac arrest on the pitch at the Euros last year) inside a minute by vigorously beating his chest to whip up their well-numbered support. It was one of seven tackles Tunisia won in the first half – the most of any side at this tournament so far.

Having never beaten European opposition in 10 prior World Cup encounters, Tunisia had history in their sights. Denmark, on the other hand, were looking to avoid making it: they remain unbeaten against African teams at the World Cup (W2, D3).

It took until midway through the second half for the North Africans to be seriously tested, Andreas Cornelius somehow hitting the post with a 0.83xG header from a corner – one of 20 in the game (Denmark 11, Tunisia 9), the most in any World Cup match since 2014. And this really was the clash of the corners: 15 (Denmark six, Tunisia nine) of the overall 24 shots came from such situations – the most at the World Cup since 1966.

But there was to be no way through via that or any other means, as Tunisia more than held on for an impressive point (after César Ramos had gone to the monitor to review a handball shout and NOT award Denmark a penalty) which gives them every chance of reaching the knockout stage for the very first time. As for Denmark, they’ve now been involved in the last two goalless draws at World Cups. Their group stalemate with France – their next opponents in Qatar – was the only one of the 2018 finals, a tally that we’ve now matched just six games into the 2022 edition.