Belgium vs. Canada: Prediction and Preview | The Analyst 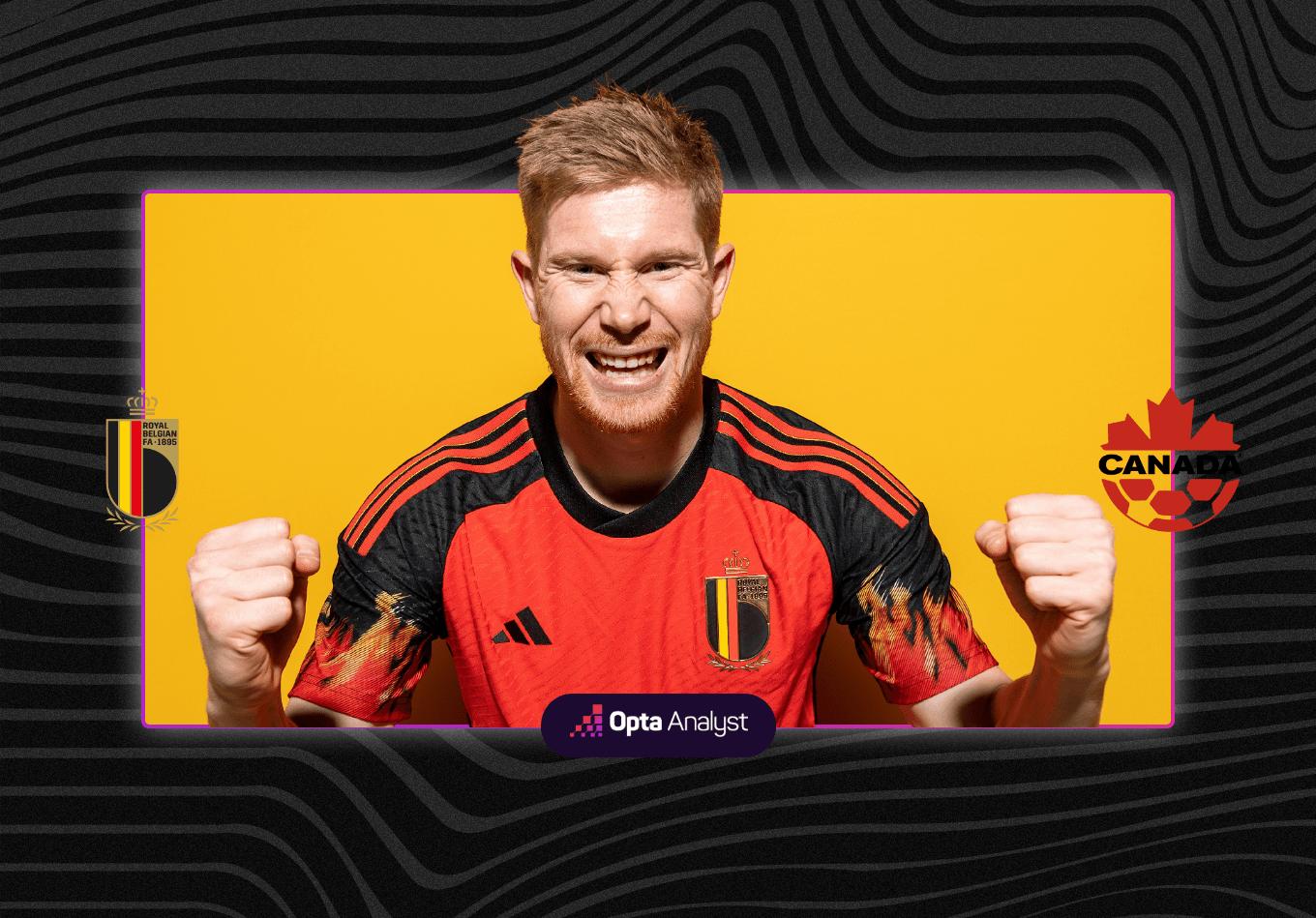 Belgium vs. Canada: Prediction and Preview

We preview the 2022 World Cup match between Belgium and Canada, including our pre-match prediction for Group F’s second game.

Play the Opta Challenge for Belgium vs. Canada now for a chance to win $500

Canada will go into their World Cup opener against Belgium with “belief, not hope”, according to midfielder Jonathan Osorio.

The North Americans defied expectations to top the final group of CONCACAF qualifying – ahead of the United States and Mexico – and earn an automatic qualifying place at Qatar 2022, and Osorio is confident of creating more surprises.

A clash with a Belgium side featuring the likes of Kevin De Bruyne, Eden Hazard and Thibaut Courtois is a baptism of fire in their first World Cup appearance in 36 years but Osorio is ready to defy expectations in the Group F fixture at Al Rayyan Stadium.

He told the Vancouver Sun: “We don’t hope any more, we believe. We’re very confident in ourselves. We want to show that we are a football nation, that we can compete with the best in the world.

“We want to surprise people, because I think people still see us as underdogs; Canada and the World Cup, they should just be happy to be here.

“But that’s not our mentality. We’re here to compete, to compete at a high level. We believe within our group, with the quality that we have and our brotherhood we can go as far as we want to go.”

Canada’s England-born coach John Herdman, who could be without star full-back Alphonso Davies of Bayern Munich due to a hamstring strain, was also in bullish mood, adding: “I think, internally, Canada is starting to expect things from us.

“If you go to France, Germany, Italy, England, Brazil, Argentina they’ll ask ‘who’s Canada?’ But I think internally, as a country, we’ve started to believe things are possible, and it’s just the same mentality – one game at a time.”

Much of Belgium’s build-up has surrounded the fitness of striker Romelu Lukaku who is set to miss the first two games in Qatar after suffering a recurrence of a hamstring strain.

Former Belgium captain Vincent Kompany, now boss of Burnley in the English Championship, understands why Roberto Martinez opted to take a gamble on the fitness of the Inter man.

Kompany missed the entire group stage at the 2018 World Cup and only returned for the knockout phase as the Red Devils finished third.

He told Het Nieuwsblad: “I didn’t play in the group stage because I had injured my hamstrings in a friendly match in preparation for the World Cup.

“Going along injured looks strange during the group stage, but once you’re further into the tournament, you need players who make the difference and can help win matches.

“Even if Lukaku can only play in one game against those bigger teams, his presence makes sense. I understand the decision. Match winners are everything in this competition.”

The Manchester City midfield maestro is the man Canada must try to keep quiet.

He has 155 goal involvements in just 224 Premier League appearances and a range of passing that can torment any defence. He will miss Lukaku’s physical presence – as both a target and a creator of space – but De Bruyne still possesses the weapons to make a difference.

David may play a little further forward than De Bruyne but his statistics are similar. In 15 games in Ligue 1 for Lille this season, the 22-year-old has contributed nine goals and three assists. Destined to join one of Europe’s big guns at the end of the season, David will hope to use the World Cup as a springboard

It is impossible to look past Belgium, despite the obvious confidence Canada gleaned from their impressive qualifying campaign. Opta’s predictor model gives Belgium a 62.2 per cent chance of opening with a win, with Canada’s hopes rated at just 17.4 per cent.

If De Bruyne, Eden Hazard, Dries Mertens and Co. find their range then it could be a very long night for Canada.