Argentina vs. Mexico: Prediction and Preview | The Analyst 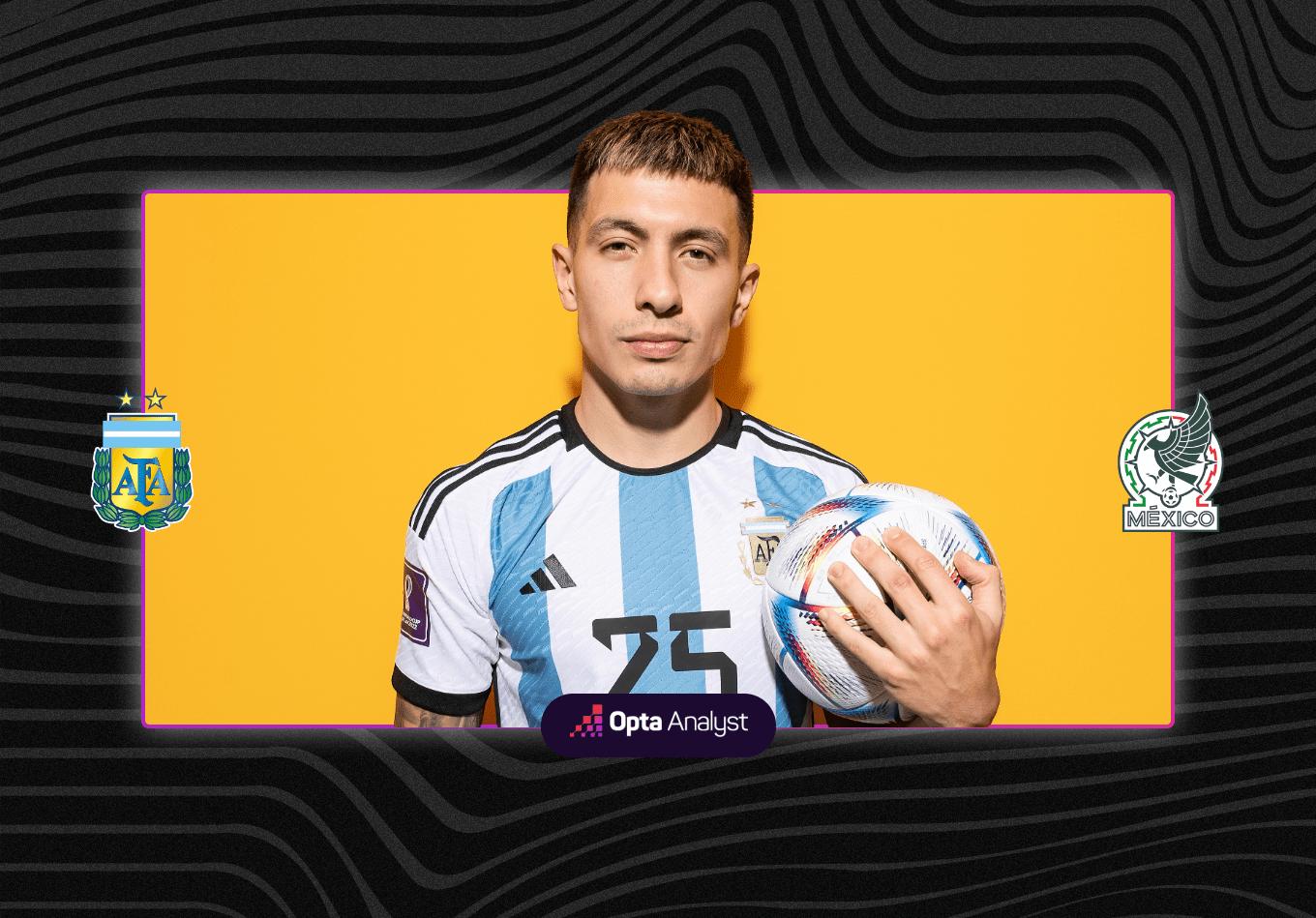 Argentina vs. Mexico: Prediction and Preview

We preview the 2022 World Cup match between Argentina and Mexico, including our pre-match prediction for each team’s second game in Group C. A shock defeat to Saudi Arabia has left Argentina needing a response, while Mexico are looking to end a run of three games without a goal.

Argentina goalkeeper Emiliano Martinez has described the Group C clash against Mexico as his nation’s “first World Cup final” as they look to bounce back from a shock opening defeat to Saudi Arabia.

The setback at Lusail Stadium was Argentina’s fourth in their last six World Cup matches (W1, D1), as many as they had in their previous 25 in the competition, with the loss bringing an end to a long unbeaten streak that sat at 36 matches.

Widely tipped among the favourites to go all the way in Qatar, Argentina now find themselves at risk of a premature exit and need a response, with Aston Villa keeper Martinez rallying the troops before Saturday’s clash at the same venue.

“We’re hurting a lot from our first defeat [in more than three years] and on top of that at the World Cup,” he said.

“We expected to play like it was a final, but we didn’t do that. After we scored the first goal we relaxed a bit and we paid for that. Saturday will be our first World Cup final.”

Play the Opta Challenge for Argentina vs. Mexico now for a chance to win $500

History is on Argentina’s side against Mexico, with the South American’s undefeated in their last 10 meetings, stretching back to the 2004 Copa America, while they have won all three previous World Cup meetings – in 1930, 2006 and 2010.

Scoring goals has been a problem at the World Cup for Mexico, who have failed to net in their last three matches – including a goalless draw against Poland in the opening game, where Guillermo Ochoa saved a Robert Lewandowski penalty.

The 37-year-old Ochoa, involved in his fifth World Cup, has never made it past the round-of-16 stage, with Mexico falling at that hurdle in the past seven tournaments – last reaching the quarter-finals in 1986, their home tournament.

Ochoa has enjoyed plenty of international joy with Mexico, earning 132 caps, but would trade it all to secure a quarter-final spot and equal his nation’s best-ever result at the World Cup.

“Everything, I would trade everything to get to the quinto partido (fifth game),” he said following the draw against Poland.

Victory for Mexico would hand them a big boost in the bid to reach the knockout stages and could end Argentina’s tournament, which would secure revenge for Mexico from the two sides’ last meeting at the World Cup in 2010.

That came in the round of 16 where Argentina won 3-1 thanks to a Carlos Tevez brace, the first of which was offside and shown on the big screens inside the stadium, understandably leading to fury for the Mexicans.

Inter forward Martinez was twice denied a maiden World Cup goal in the defeat to Saudi Arabia by the offside flag, having been unable to break through the opposition’s high line. No Argentina player was flagged offside more than Martinez in that match (three, also Angel di Maria).

Martinez will need to be more involved in play, having touched the ball just 25 times in that defeat, lower than any of his team-mates apart from Julian Alvarez (12), who was introduced after 58 minutes.

No player had more shots in Mexico’s goalless draw against Poland than Vega (five), four of which came within the opposition box. However, he failed to hit the target with any of his attempts on goal.

With six touches in the opposing box in that match, Vega showed he will get into dangerous positions and provide an attacking threat for Mexico, though he will need to be more decisive in the final third.

Argentina’s loss to Saudi Arabia ended a run of 13 straight victories against non-European sides, stretching back to 1990, and the South Americans have never lost consecutive World Cup matches to teams outside of Europe.

Our supercomputer expects that run to continue, with Argentina given a 60.7% likelihood of a win, compared to a 17.4% chance of Mexico securing what would be a memorable victory.

A draw may not be enough for either side in the hunt to advance to the knockout stages but is seen as 21.9% likely.