Argentina 1-2 Saudi Arabia: One of the Biggest Shocks in World Cup History 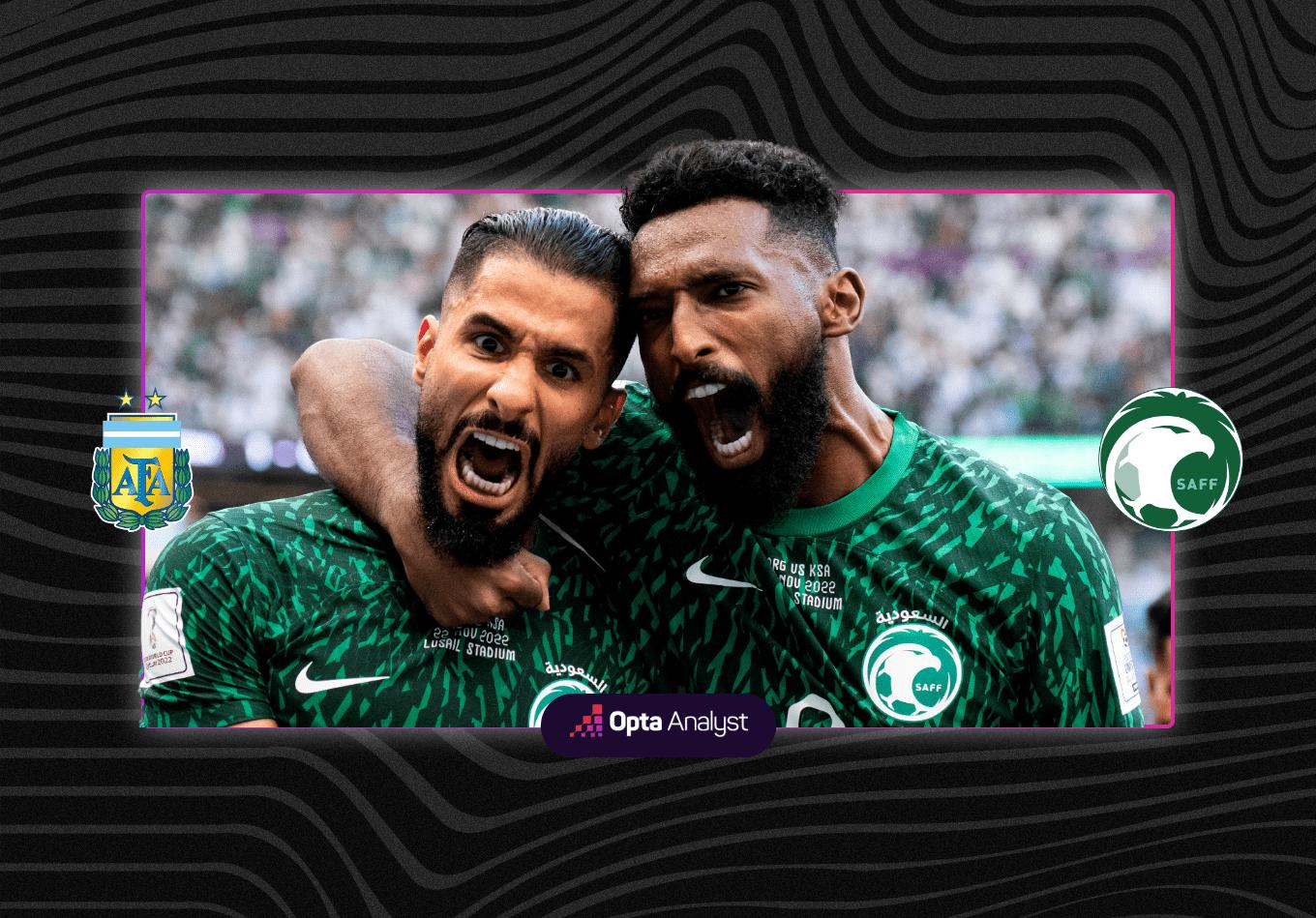 Argentina 1-2 Saudi Arabia: One of the Biggest Shocks in World Cup History

On paper, it was the biggest mismatch of the 2022 World Cup. On the pitch… it was one of the biggest shocks in World Cup history. Saudi Arabia, ranked 51st in the world, stunned Argentina – one of the pre-tournament favourites – by coming from a goal down to record the most remarkable result in their country’s footballing history. If the romanticists have it their way, Lionel Messi will captain Argentina to glory in his last World Cup – and he still may; this defeat won’t prove terminal – but that particular narrative was trashed at the Lusail Stadium.

It took Messi 10 minutes to score his seventh World Cup goal – all of which have come in the group stage of the competition – as he nonchalantly dispatched a penalty, the fourth awarded in the first five games of this tournament (all four have been converted). In doing so, the great man became the first Argentina player to find the net at four editions of the World Cup (2006, 2014, 2018, 2022) and – aged 35 years, 151 days – the Albiceleste’s second-oldest World Cup scorer after Martin Palermo against Greece in 2010 (36 years, 227 days).

Saudi Arabia continued to employ a seemingly reckless high line. Emphasis on ‘seemingly’ – because Argentina were caught offside six times inside the first 32 minutes (more than any team in an entire match at the previous World Cup). The assistant referees (and the new semi-automated offside technology) were having a field day as the offside tally (all for Argentina) reached seven before half-time.

For all their success in thwarting the regular Argentine advances though, Saudi Arabia failed to muster a single shot in the first half – for the third time at a World Cup (previously vs. Germany in 2002 and vs. France in 1998). For Argentina, it was only the second time at a World Cup since 1966 that they’d not faced a single attempt in the opening 45 minutes (also vs. Greece in 2010, a game they won 2-0). Lionel Scaloni’s side, while no doubt disappointed not to be more than 1-0 up, will have felt sufficiently in control going into the break.

Four minutes into the second half, they’d have felt anything but, as Saudi Arabia equalised with their first shot of the match – courtesy of Saleh Al Shehri. It was the striker’s fifth goal from his last five competitive shots on target – and the Green Falcons’ first-ever World Cup goal against a nation who’d previously lifted the trophy.

And it took less than four minutes for things to go from bad to embarrassing for Argentina: skipper Salem Al Dawsari turned the game on its head with arguably the goal of the tournament so far – brilliantly bending it past Emi Martínez from the corner of the box. And with two goals in the bag, the mission for Saudi Arabia – defensively well-drilled by the familiarly white-shirted Hervé Renard, who picked up his first World Cup victory – was simple: hold on.

They hardly had to contend with Messi and co. throwing the kitchen sink at them, though. The taps and the draining board and other related paraphernalia, sure, but Argentina hardly seriously tested Saudi goalkeeper Mohammed Al Owais after going behind; Messi’s skied free-kick rather summed up his alarmingly anonymous 90 (ok, 103) minutes.

This historic upset ended a 36-match unbeaten run for Argentina, who still have to face Mexico and Poland, both ostensibly stronger opponents than the Saudis, as they look to avoid only their second World Cup group stage exit in their last 14 qualifications (they previously fell at the first hurdle in 2002).

Meanwhile, Saudi Arabia made mathematical history by winning despite an expected goals output of just 0.14 – the lowest xG needed to win a World Cup clash since 1966 (after Japan’s 0.20 vs. Cameroon in 2010).