Argentina 2-0 Mexico: Sentimental Favourites Alive, but Are They Well? | The Analyst 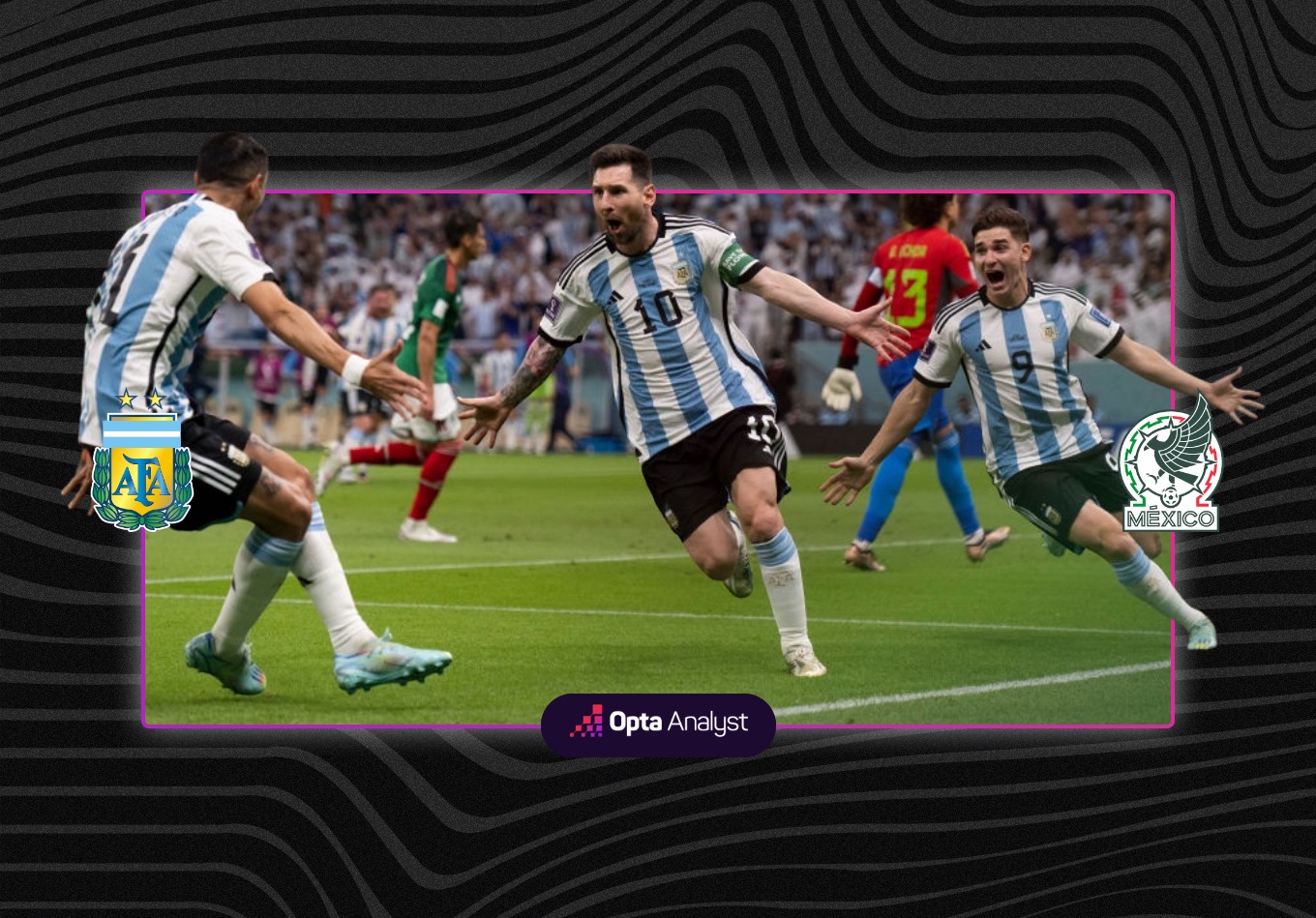 Argentina had never lost their first two matches at a World Cup, and they’d never not beaten Mexico at a World Cup. They weren’t about to waiver with their 2022 tournament on the line in front of a congregation of tension at Lusail Stadium.

This tournament has had its moments, and those moments have often required patience. That was again the case as Lionel Messi won it for Argentina and made winning Group C a very real possibility.

The Mexico attack picked up where it left off after their goalless draw against Poland, creating next to nothing in the opening 45 minutes, but Argentina were even worse. The best chance came in the 45th minute with Alexis Vegas free kick, on which Emi Martínez was forced to make a save. For Argentina, it a first half in which they showed no signs of being able to break down the Mexican midfield, much less an out-of-possession El Tri back five.

It was the 12th goalless first half at the tournament and the lowest combined xG in a first half too:

Mexico tend not to concede in the first half at World Cups, and their run without conceding in the opening period now stands at 10, dating back to their last meeting with Argentina in 2010. For La Albiceleste, with 67.3% first-half possession, it was reminiscent of that Javier Mascherano-led 2018 Argentine midfield that struggled to create with the opposition behind the ball.

Where other matches have picked up in the second half, this one did so in isolation. And the thing about boring possession is it’s probably even boring for those defending it, and that seems to be what happened in the 64th minute when a 34-year-old Rosario boy found a 35-year-old Rosario boy hanging around the top of the penalty area.

From Ángel Di María’s first World Cup assist, it was Lionel Messi’s 93rd goal in 168 appearances for Argentina, and we’re at the point in his career and the tournament where each of his goals now work out as more important than the last. He’s equalled Diego Maradona on World Cup goals with eight – two behind Gabriel Batistuta – but there’s still work to do if he’s going to get an opportunity to register a first in the knockout stages before he hangs his boots up.

The story for the day is that the sentimental favourites head into Matchday 3 with a 78.8% chance of progressing to the round of 16, but for the expectations of this team to be met, a much better final product is going to be required. Argentina scored with both of their shots on target and managed just five attempts overall for an underwhelming and perhaps even concerning 0.28 xG. Saudi Arabia defeated Argentina with half that, but expectations make this excusable for some and not for others. The match ended with the lowest combined xG of any match in the tournament (0.54):

Part of the answer to correcting that may be found in Enzo Fernandez, who came on in the 57th minute and scored an 87th-minute goal that rivaled Messi’s, but the Benfica midfielder is yet to start and has played only about a third of the minutes available.

For Mexico, it’s just one win in last 19 meetings with Argentina with losses in all four World Cup meetings. Their streak of reaching the round of 16 is now in serious jeopardy with only a 26.5% chance of progression heading into MD3 with the unpredictable Saudi Arabia.