What You Didn’t Know About Premier League Passing | The Analyst 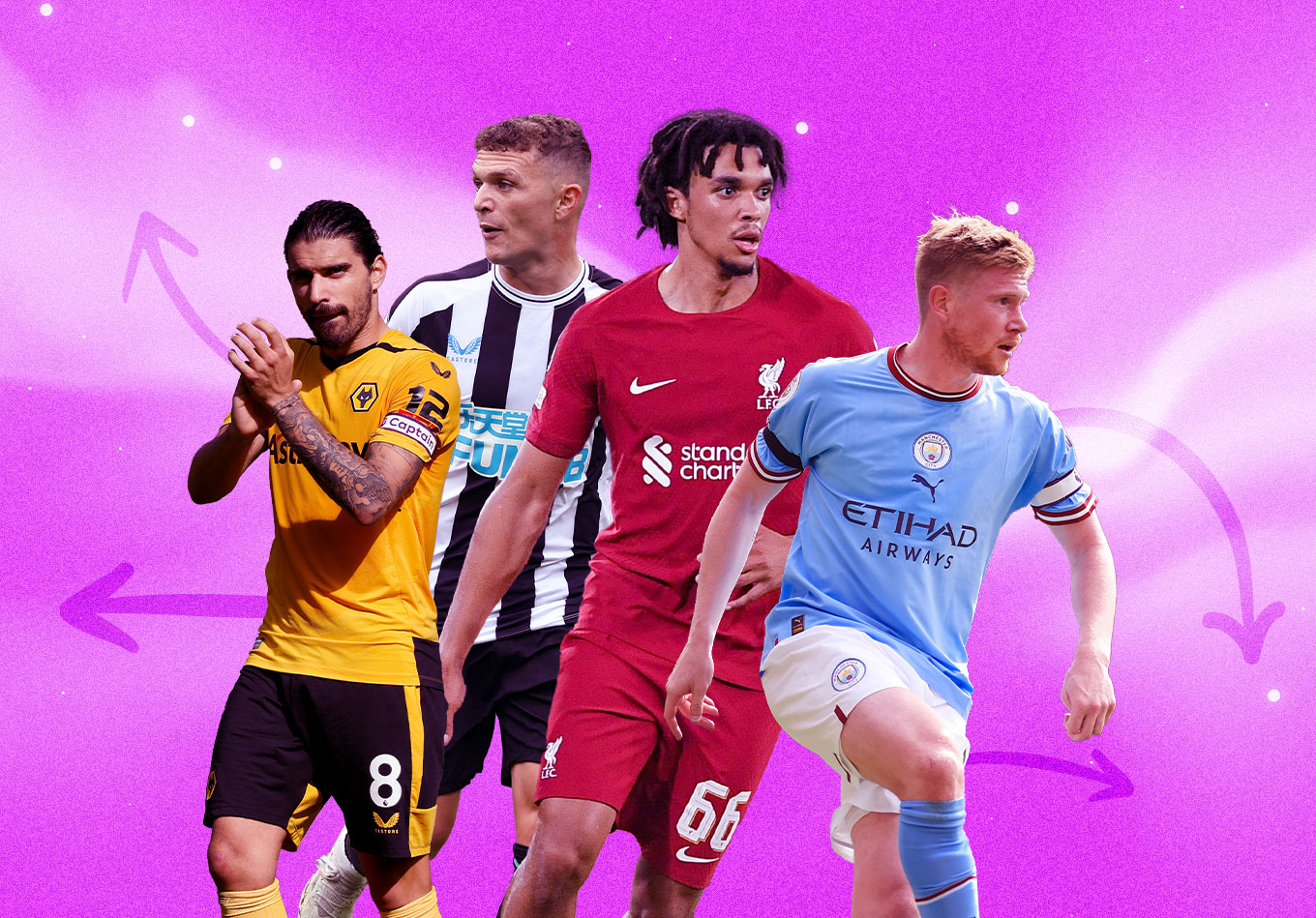 What You Didn’t Know About Premier League Passing

We’re (mostly) seven games into the Premier League season and the international break has so graciously provided us with a moment to take a step back and consider what we’ve seen so far. One thing we’ve seen a lot of – over 60,000 times in fact – is the most common action in football: the humble pass. There are around 900 of them attempted per match and they’re packed with variety – chance creating, play progressing, cross delivering, you name it.

By looking at different types of pass we can isolate which players are (trying) to do what on the pitch. We’ve done just that, and present to you the passing highlights of 2022-23 so far.

NB: Generally speaking, this analysis only considers players to have played at least 180 minutes of action.

Passes that create shots. Often considered some of the most valuable passes and a hallmark of the playmaker.

Let’s first look at chances created from open-play passes. Mohamed Salah, who’s had an otherwise rather lacklustre start to the season, is top with 23 chances created (3.8 per 90). And that’s quite some distance ahead of second place Kevin De Bruyne who sits on 17 (2.8 per 90).

But, as we all know, it’s about quality as well as quantity. If we look at the xG of those shots assisted, then Salah’s 1.72 xG assisted (0.07 per chance created) looks rather poor compared to De Bruyne’s 3.27 (0.19 per chance created). That is to say, on average, each chance De Bruyne creates has a 19% probability of being scored – Salah just 7%. De Bruyne is creating dangerous opportunities. Imagine our shock.

In fact, De Bruyne’s six assists from open-play passes this season is double any other player. It helps when you’ve got Erling Haaland to aim for (he accounts for two of those assists by the way).

Taking a look at the team level, below is where each team have created their chances from this season:

Newcastle playing in those half-spaces, Liverpool focusing down their right, and Southampton loving a cut-back. How does your team look?

Creating chances is great, but to do that we need to get the ball close to the goal. Progressive passes aim to capture this and are defined as “completed open-play passes in the attacking two-thirds of the pitch that move the ball at least 25% closer to the goal”.

Trent Alexander-Arnold is in a league of his own here. With 10.6 progressive passes per 90 (57 in total) he is far ahead of Leeds United’s Marc Roca in second on 7.3 per 90 (37 in total). It is testament to the importance of Alexander-Arnold in Liverpool’s attacking play. Despite the fact that he has registered zero assists thus far, he remains crucial in their ball progression.

And we can look at the top progressors in each position:

Naturally, the wider positions and less-advanced midfielders – who have more space to play into – tend to have more progressive passes. One player in particular stands out and that’s Newcastle’s Allan Saint-Maximin. The Frenchman has been through a transformation. This season’s 6.8 progressive passes per 90 is more than triple the 1.9 per 90 he recorded in the last campaign. And that goes along with his impressive dribbling as a method of ball progression. He’s averaging 14.2 progressive carries per 90 (second highest in the league) and 7.3 take-ons per 90 (highest).

Simply put, he is becoming indispensable for Newcastle.

For a league-wide overview, we can look at where each team takes their progressive passes from.

Liverpool’s preference for the right-side is no surprise given Trent Alexander-Arnold’s numbers. West Ham, meanwhile, have a sharper focus on their left – although both full-backs appear important – which leads the chance creation we saw above.

Crosses remain a key method of getting the ball into the box, accounting for 40% of all open-play passes into the area. And it is probably no surprise to see Alexander-Arnold top the list again with 7.1 open-play crosses attempted per 90 (38 in total). He has an attacking reputation for a reason, and his five chances created from these crosses is also a joint-high.

The addition of Darwin Núñez to the Liverpool line up presents a new dimension to their crossing. Despite only featuring in three games, Núñez has been on the end of more Alexander-Arnold open-play crosses (3) than anyone else. It’s early days, but this is perhaps a combination to look out for.

As you would expect, full-backs and wingers dominate crossing. However, the player with the second-most open-play crosses is a midfielder. Kevin De Bruyne is attempting two more crosses per game this season (5.8 attempted per 90 / 35 in total) compared to last campaign. That uptick is perhaps related to the presence of a certain Norwegian striker.

To get an idea of a team’s reliance on crosses, we can look at what fraction of their passes into the penalty area are crosses. West Ham love a cross, with 57% of their open-play box entries coming from them. Arsenal, meanwhile, have taken the opposite approach with just 29% coming from crosses.

Corners are the most dangerous set piece, offering a free opportunity to get the ball into the box. Some teams are committed to taking advantage of this – Everton, Nottingham Forest, Bournemouth and Crystal Palace have all played just a single corner short. Others prefer more variety with a short option – Spurs, Aston Villa, Arsenal and Manchester United have so far taken over 20% of theirs short.

And then there’s the inswing / outswing debate. The graphic below demonstrates how often each team has used either, and from what side. Not all corners are shown here – there are also short corners and those with no swing – but this graphic covers the majority.

For Arsenal there is only one way – the inswinger. The winners of the last five Premier League titles, however, disagree – Liverpool (65%) and Manchester City (64%) prefer an outswinger. And there are other trends: Nottingham Forest and Southampton almost exclusively taking outswingers from the right and inswingers from the left.

In terms of shot creation, Liverpool (14) and Man City (12) are top for shots taken directly following a corner. Newly-promoted Fulham are also one of the most threatening teams – creating 11 direct chances. Interestingly, 10 of these chances arose from an outswinging corner from the right – despite Andreas Pereira generally taking them from both sides. Perhaps it’s just an angle that Pereira is better at hitting.

And a quick mention for Southampton. James Ward-Prowse continues to be their dead-ball specialist, with the midfielder taking every single corner. There also appears to be a tactic to use throw-ins to get the ball into the box. 48% of Saints final-third throws are hurled into the box (the highest in the league) with Mohammed Salisu being the man to deliver them.

Goalkeepers have been through a revolution in recent times, becoming, for many managers, a key launchpad for building sequences of play. One aspect of how teams utilise their goalkeepers is through their goal kicks.

For Spurs under Antonio Conte, Hugo Lloris has a clear mandate – keep it short. 63% of his goal kicks have ended inside his own area and his 22-metre average goal kick length is the shortest in the league. Manchester City and Liverpool follow a similar theme, although their goalkeepers have a greater tendency to play medium-length goal kicks just outside their areas.

At the other end of the scale, there are those who like to keep it long. Nick Pope kicks 78% of his goal kicks long, which is the highest of any goalkeeper to have played at least three games. You can take the man out of Burnley but not Burnley out of the man. Arsenal’s Aaron Ramsdale appears to be under similar instructions with 74% of his goal kicks long.

Fulham are again an interesting case. For the first two games of the season, Marek Rodák was given the goalkeeping duties. And there was no messing about here, with 87% of his 15 goal kicks played long.

However, Bernd Leno has since settled in following his move from Arsenal and has played the last five matches. This has triggered a complete change in Fulham’s goal-kick strategy. Leno sends just 35% of his goal kicks long, with 62% played short into his own area – the second highest proportion in the league. It appears the addition of Leno has been crucial in allowing Marco Silva to enact his desired strategy.

Take a look below to see how your goalkeeper uses their goal kicks.

Passing has so many facets and there’s so much we haven’t discussed. Did you know Erling Haaland has received by most through balls (5) in the league this season? Or how about the fact Declan Rice has attempted the most switches (11)? It would be impossible to cover everything here.

But if there’s one thing we know – expect to see a severe clash of goal kick styles when Leno and Pope meet this weekend. Oh, and keep an eye on that Kevin De Bruyne, he ain’t half bad.