Six New Stars to Spot in the Autumn Nations Series: Uncapped Ones to Watch | The Analyst 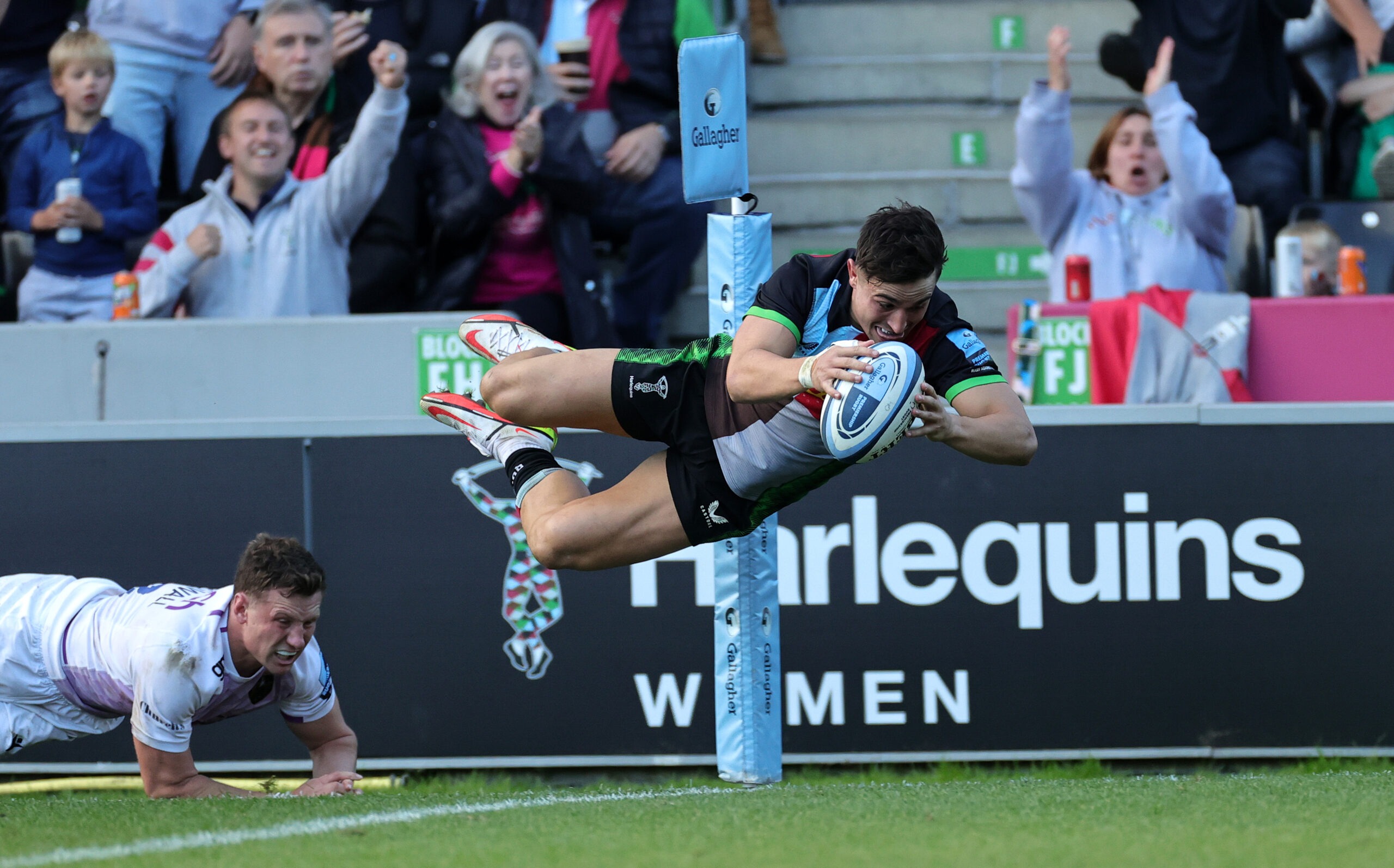 Six New Stars to Spot in the Autumn Nations Series: Uncapped Ones to Watch

Who doesn’t like a bolter? The expert data editors at Opta have put their neck on the line and plucked out one uncapped player that has been selected for each of the Six Nations teams’ Autumn Nations Series campaigns. With a Rugby World Cup on the horizon in 2023, this could be the final chance for any newbies to impress the coaches ahead of rugby’s showpiece event.

These guys are the future and don’t let anyone tell you otherwise.

Cadan Murley made his Premiership debut for Harlequins back in 2018 but his breakthrough came last season when he played 23 matches and scored 15 tries, a tally only Max Malins (16) bettered. In 2022-23 his stock has continued to rise, so much so that Eddie Jones had little option but to include him in his Autumn Nations Series squad. After just five appearances for Quins in this new campaign, he has already scored a league joint-high seven tries and tops the charts for metres made (511).

A couple of super impressive finishes have caught the eye (and highlights reels), but his game is not just about glitz and glamour. The 23-year-old has made the joint most dominant tackles (five) of any back in the competition this season and is one of just five back-three players (wingers/full-backs) to hit 50+ rucks. A winger who likes getting his shirt dirty and mucking in with the nitty gritty, what is the world coming to…

Les Blues’ boss Fabien Galthie has selected eight uncapped players in his 42-man squad for this year’s Autumn Nations Series, no doubt with an eye to including some in his squad for next year’s home World Cup.

While Léo Berdeu may lack experience at Test level, he certainly knows how to perform when the stakes are at their highest, having helped steer his club side Lyon to their first piece of major silverware in nearly 100 years last season by scoring 10 points in the EPCR Challenge Cup final against RC Toulon. In fact, the young fly-half was the top points-scorer overall in last year’s competition (71), as well as the 2021/22 TOP 14 campaign (251).

Although he’s incredibly effective with his kicks from hand, registering more kicking metres than any other player in last season’s Challenge Cup (1,827m), Berdeu’s greatest strength lies in his strong running game, with his eight line breaks in the competition being the joint-most of any player, alongisde Lyon teammate Davit Niniashvilli, and over double the total of any other fly-half.

To say France are fairly well-stocked in the fly-half department would be an understatement, and he will have certainly have his work cut out to earn regular playing time with the likes of Romain Ntamack, Matthieu Jalibert and Louis Carbonel also vying for the 10 shirt, but Berdeu has proven that he should never be underestimated.

One of six uncapped players in the Ireland squad for their Autumn Nations Series fixtures, Joe McCarthy could find himself enjoying the most game time for Andy Farrell’s men in November.

With Iain Henderson out injured and Tadhg Beirne picking up a groin injury in Munster’s win against the Bulls in the United Rugby Championship, Ireland could be a little light in the second row. While the Leinster lock may be the beneficiary of a couple of absentees, his excellent form may well have seen him win a place in the XV regardless.

Alongside a host of impressive performances for his native province since the beginning of last season, McCarthy also caught the eye during the recent Emerging Ireland tour. He beat seven defenders during his 125 minutes of playing time across the series, the most of any Irish player – a category that is usually topped by outside backs rather than the big men in the engine room. McCarthy also did his fair share of the dirty work too, hitting the most defensive rucks of any player (13), claiming a couple of jackal turnovers in the process, as well as contesting 19 rucks in attack – only three players hit more.

Another factor in favour of the 21-year-old lock is his sheer size. Irish Rugby list him as being 18st 8lbs, comfortably the heaviest second row in their ranks for the autumn and heavier than the injured Iain Henderson too. Although it doesn’t mean he’s a better player, it certainly won’t hurt the Ireland set piece, especially when they are set to face a gargantuan Springboks pack first up. Joe McCarthy has had a rapid rise in the last year and it would be no surprise to see Andy Farrell give him his first Test cap in November.

Jack Dempsey is a novelty on this list in the sense that he has actually played at Test level previously, earning 14 caps for Australia between 2017 and 2019 and even scoring a try for the Wallabies at the 2019 Rugby World Cup. However, due to a Scottish-born grandmother and a tweak to World Rugby’s international eligibility rules, Dempsey now finds himself included in Gregor Townsend’s squad for this year’s Autumns Nations Series ahead of their opening game against, *checks notes*, Australia.

Dempsey has been in sensational form for Glasgow Warriors since joining them ahead of the 2021/22 United Rugby Championship campaign. Since making his debut for the Warriors, the Sydney-born back row has gained more metres from his carries than any of his club teammates (927m), a total which is also the second highest of any player in Scotland’s squad, only behind Edinburgh winger Darcy Graham (1,052m).

Matt Fagerson has had Scotland’s number eight jersey locked down as of late, having started 14 of their 17 Test matches since the start of 2021, however, should Dempsey carry his club form back onto the international stage, he could have a battle on his hands to keep hold of it.

Enrico Lucchin has never played for the senior Italy side before, however, he has been involved at age-group level and been in and around senior training squads. The 27-year-old Zebre centre will certainly be hoping that he finally gets a chance to shine on the international stage this autumn.

Whilst Zebre are still winless in the United Rugby Championship this season, they have shown a marked improvement on recent campaigns, finishing within five points of both Leinster and the Sharks, and a large proportion of the credit for their improvement can be aimed at Lucchin’s scintillating start to the campaign.

Lucchin is one of just seven players, and the only Italian, to have provided three or more try assists in the league this season, and of those seven players, he also has the best minutes per assist ratio (63 mins/assist).

Should Italy wish to make the most of their exciting attacking talents such as Ange Capuozzo and Monty Ioane, they could do a lot worse than having Lucchin providing them with try-scoring opportunities on a regular basis.

Joe Hawkins was captain of the Wales team which won three of their four matches in this year’s U20 Six Nations Summer Series, and has become somewhat of a regular for Ospreys in the United Rugby Championship so far this season, appearing in three of their first five fixtures of the campaign.

Hawkins dabbled in playing at fly-half during his junior days, and that influence is clearly evident in his game to this day, with the youngster regularly acting as a playmaker for his side and also bringing a considerably dangerous kicking game to the table. In fact, Hawkins acted as Wales’ primary goal-kicker during the tournament, and with considerable success, boasting the highest success rate of any player to attempt over five place-kicks (80% – 8/10) and provided three try assists via kicks, the joint-most of any player, alongside Ireland’s Sam Prendergast.

Hawkins also completed 24 tackles in the tournament, more than any other Welsh back, and provided two break assist passes for his team-mates, further showcasing his ability to fulfil all the duties of a modern-day inside centre. Should the prodigious centre continue on his current upward trajectory, he could very well find himself involved in Wayne Pivac’s plans for next year’s World Cup.