Cover 3: A.J. Brown Versus Trevon Diggs and Other Must-See Matchups of the NFL’s Week 6 | The Analyst 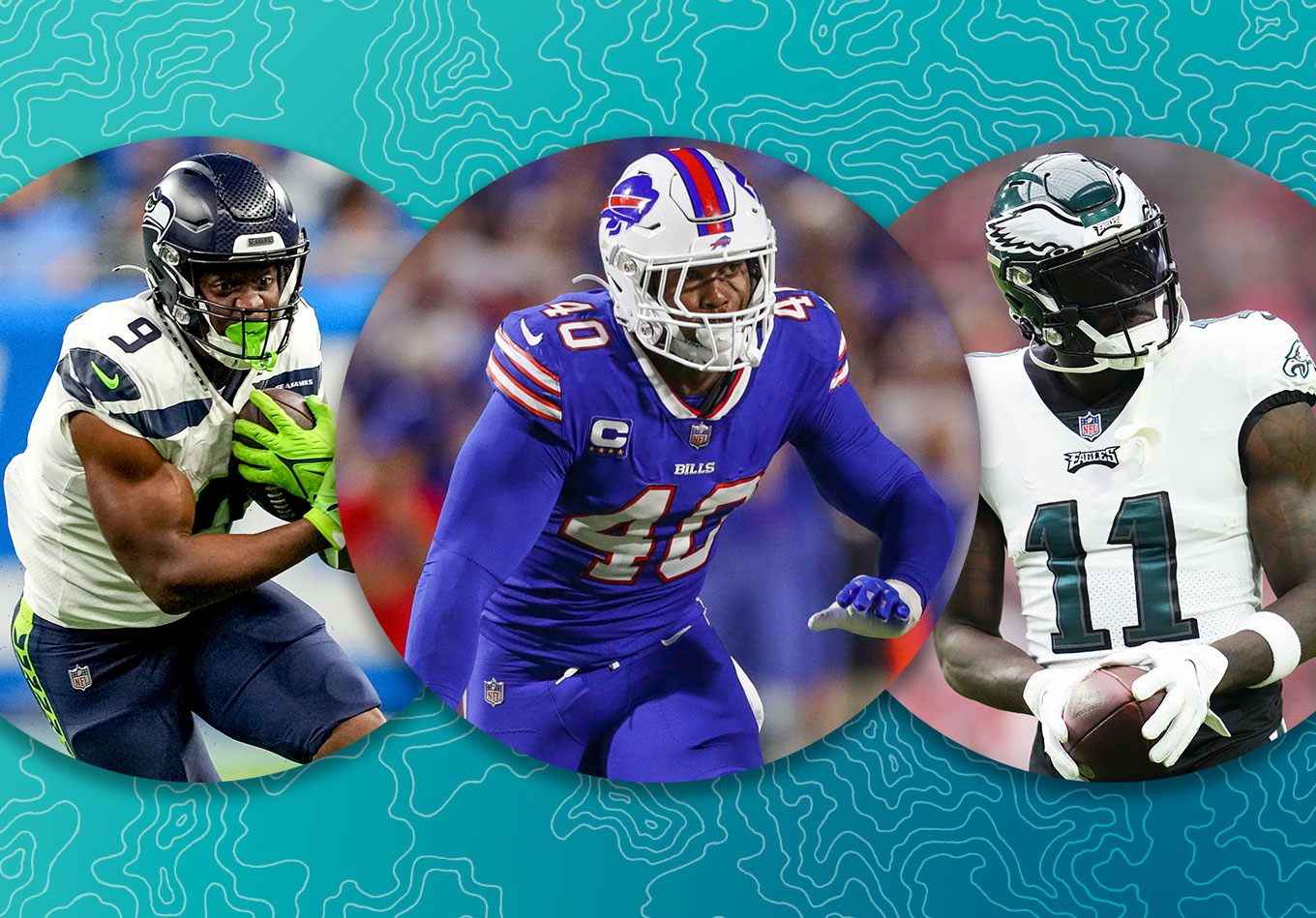 Cover 3: A.J. Brown Versus Trevon Diggs and Other Must-See Matchups of the NFL’s Week 6

A quick look at the Week 6 slate, and a couple of games immediately jump out at you.

Although sequels are rarely as good as the original blockbusters, the Kansas City Chiefs and Buffalo Bills are set to clash for the first time since trading blows in one of the greatest playoffs games in NFL history nine months ago.

A matchup between fierce division rivals also figures to be appointment viewing with the undefeated Philadelphia Eagles battling the 4-1 Dallas Cowboys on Sunday night.

While our SmartRatings model believes both the Bills-Chiefs and Cowboys-Eagles to be appointment viewing, it also projects a pair of sub-.500 teams – who are squaring off in a city where they possibly could be playing second fiddle to the local fan base – will be another one of the most compelling contests of the weekend.

So after analyzing the data, we’ll take a look at the three games we believe will deliver the most excitement and dissect some key matchups.

If we can be honest for one second, while this a huge early season game between these NFC West foes – as the winner will move to .500 while the loser will be saddled with an ugly 2-4 record – it might not be the most anticipated sporting event in Seattle on Sunday. If the Mariners can avoid elimination on Saturday, Game 4 of the Astros-Mariners American League Division Series will be taking place a stone’s throw away from the Seahawks’ Lumen Field. While most Seattleites would then be tuning in late for the NFL game in town with first pitch at T-Mobile Park scheduled for approximately two and a half hours earlier, the Cardinals-Seahawks has the makings of an intriguing matchup.

Few could’ve predicted the start to the season Geno Smith has put together, but here we are after five weeks and the veteran backup ranks first in the NFL in QB rating (113.2) and completion percentage (75.2), and third in yards per attempt (8.31). He’s leading an offense that since Week 3 has an NFL-best 13 offensive plays of 25 yards or more while amassing 1,371 total yards – four fewer yards than the much-ballyhooed Bills for the most in the league.

While Smith has emerged as one of the leading candidates for NFL Comeback Player of the Year, the ground game has helped take some of the pressure off him. However, now Kenneth Walker III is Seattle’s first-string running back after Rashaad Penny was lost for the season after suffering a broken fibula in last Sunday’s 39-32 loss to the New Orleans Saints.

Walker ended up with an impressive final statline this past Sunday, rushing for 88 yards on just eight attempts for a robust average of 11.0 yards per carry.  Much of that production, however, came on one play, in which he cut back through a huge hole and showed some explosiveness in scampering 69 yards untouched for a touchdown. While that play helped exemplify why the Seahawks selected him in the second round of this past April’s draft, Walker didn’t do much else to excite on his other seven carries, running for 3, 2, 2, 1, 3, 6 and 2 yards.

A problem for Walker has been creating on his own when things break down at the line of scrimmage. He’s been stuffed for negative yards on 17.4% of his runs – the fourth-worst rate in the NFL among those with at least 20 carries – and on plays in which a defender wins his matchup against a specific blocker and is able to defend multiple gaps successfully, Walker is averaging just 1.20 yards per carry. The NFL average among the 54 running backs with at least 20 carries is 3.04.

He’ll get his first chance to show what he can do against a Cardinals team that has been a bit vulnerable against the run in its last few games. In the same time that Seattle’s offense has been excelling since Week 3, Arizona is allowing 18.2% of all opponents’ runs to go for at least 10 yards – tied with the New England Patriots for the second-worst rate in the NFL. The Cardinals gave up an opponent season-high 139 yards on the ground in last Sunday’s 20-17 loss to the Eagles, and on the season, they’re 20th in the league in defensive EVE against the run – allowing 0.361 more rushing yards than expected.

Arizona has also struggled to stop the run in the last four matchups with the Seahawks, permitting 163.3 rushing yards per game and 5.94 yards per attempt in those contests.

Not a lot has changed since these teams last met in that instant classic at Arrowhead Stadium in an AFC divisional playoff game that the Chiefs won 42-36 in overtime. Both have Super Bowl aspirations and both are led by offenses that can seemingly score at will. These teams rank 1-2 in scoring offense (Chiefs – 31.8, Bills – 30.4), third-down percentage (Bills – 55.7, Chiefs – 52.5) and successful play percentage (Chiefs – 56.4, Bills – 54.1).

Yet although both teams can pile up points in a hurry, the Chiefs have been stagnant at times. They managed just 47 yards on their first three drives on Monday night against the Las Vegas Raiders and found themselves in an early 17-point deficit before catching fire and storming back for a 30-29 victory. Patrick Mahomes and Travis Kelce put on a clinic near the goal line, as Mahomes found Kelce for four short touchdown passes. Kelce finished the game with a mere 25 receiving yards – the fewest by any player in NFL history with at least four receiving TDs in a game.

While the Chiefs stumbled out of the gate in Week 5, the Bills jumped all over the Pittsburgh Steelers, racking up 400 first-half yards to take a 31-3 lead into the locker room en route to a 38-3 win. Led by Josh Allen and his league-leading 330.2 passing yards per game, the Bills are averaging an NFL-best 6.69 yards per play and rank first in offensive EVE at 1.224 yards over expected on all plays – 0.354 higher than the second-best Seahawks. While Mahomes’ 15 touchdown passes are one more than Allen for the most in the NFL, the Chiefs rank ninth in average yards per play (5.82) and 10th in offensive EVE with an average of 0.429 yards over expected on all plays.

It’s imperative for the Chiefs to avoid another slow start this week, and the pressure will be on left tackle Orlando Brown to keep Von Miller out of Mahomes’ face. So not only do the Bills possess one of the league’s top offenses but they also boast a defense that is tied with the 49ers for fewest points allowed (12.2 per game) and ranks second in opponents’ average yards (260.4). Miller is the linchpin to the defense, responsible for creating pressure up front and disrupting the quarterback.

On the season, Miller has a pressure rate of 21.4% with the average for edge rushers sitting at 15.8% and has an adjusted sack rate of 4.8% – again, higher than the league average of 3.2%. Brown, meanwhile, has only surrendered one sack through five games but is still prone to being beaten and allowing the defender to get in the backfield and create pressure, which is Mahomes’ kryptonite. Among the 29 left tackles that have pass protected on at least 75 plays, Brown’s 11.7 pressure rate allowed percentage ranks seventh lowest, with the league average at 8.3. However, his adjusted sack-allowed percentage of 0.7 is eighth best, with the league average at 1.6.

Mahomes has been been sacked three times in each of the last two games, and while he’s dangerous at scrambling to extend plays and find open receivers, he’s been a below-average quarterback in well-thrown percentage while under duress.

The Chiefs certainly have the firepower offensively to keep up with the Bills, but the last thing they want is to have Mahomes passing with a man in his face as that would appear to spell doom. Both the Bills and Chiefs are a bit banged-up in the secondary with Buffalo safety Jordan Poyer dealing with an injury to his ribs, while Kansas City safety Bryan Cook (concussion) and cornerback Rashad Renton (hamstring) were both injured in the win over the Raiders.

And while Allen and Mahomes are both capable of picking apart opposing defenses, the Bills will have the upper hand in this matchup if they can fluster Mahomes.

This will be the 123rd matchup between the Cowboys and Eagles since they began playing one another in 1960, yet this marks the first time these bitter rivals meet with both teams riding winning streaks of at least four games.

It will be strength against strength when the Eagles have the ball as you’ve got the dynamic Jalen Hurts and the prolific Philadelphia offense facing Micah Parsons and the stingy Dallas defense. While Parsons will be hounding Hurts and chasing him around, the A.J. Brown-Trevon Diggs matchup on the outside could go a long way in deciding the outcome.

Brown and Diggs figure to line up across from one another, though Diggs could also find himself covering former Alabama teammate DeVonta Smith on occasion. Brown had a sensational Eagles debut, hauling in 10 passes for 155 yards in the season opener, but has 18 catches in the four games since then. He had season lows of three receptions and 32 receiving yards in last Sunday’s 20-17 win at Arizona, and was targeted only once after halftime.

While Smith ranks third among all receivers with a minimum of 30 targets in open percentage at 83.8 and seventh in burn percentage at 67.6, Brown ranks third in burn yards per route at 4.3 and fifth in yards after the catch with 176. Containing the receiving duo is no easy task, but Diggs is one of the best in the NFL in pass coverage. He has a league-leading nine passes defended, a burn-allowed percentage of 45.2 – below the league average of 51.7 – and the best open-allowed percentage among the 61 cornerbacks that have been in pass coverage on at least 100 plays.

Thanks to the play of Diggs, Parsons and company, the Cowboys, who are coming off last Sunday’s 22-10 win over the Los Angeles Rams, have held their first five opponents to fewer than 20 points for the first time since 1972.

Dallas has won the last three matchups with Philadelphia by 20, 20 and 25 points, and could be looking at dealing the Eagles their first loss of 2022 if they can curb the offense’s production.