On the Plane? The England Squad Outsiders | The Analyst 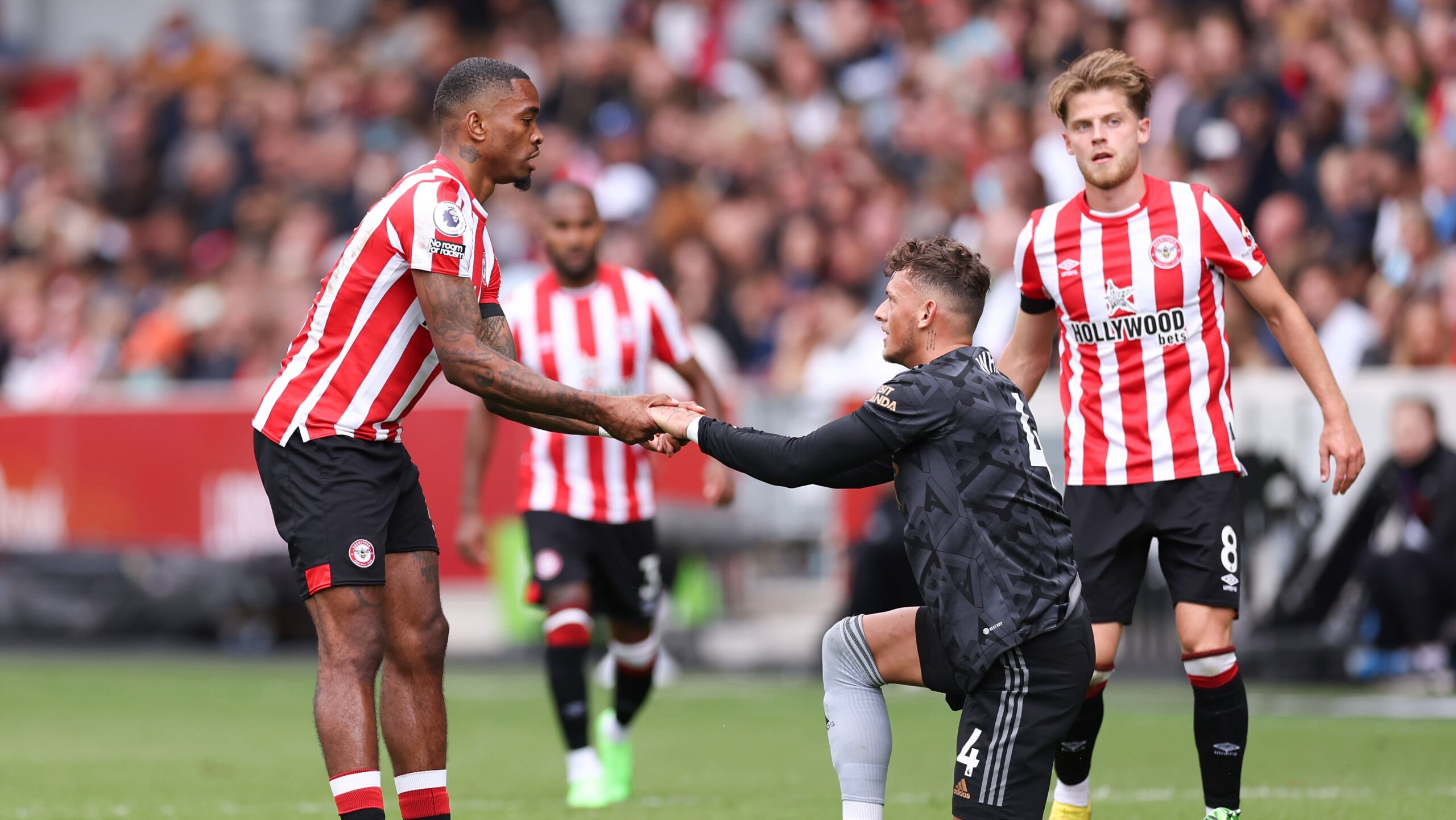 On the Plane? The England Squad Outsiders

For the first time since Italia ’90, England head into a third consecutive major tournament under the same manager. As such, we largely know what to expect from Gareth Southgate – which means we can largely predict how his squad for the 2022 World Cup is going to shape up.

But with FIFA increasing the permitted squad size from 23 to 26 for the tournament, there are a few more places up for grabs than usual. A good dozen or so players are waiting in the proverbial departure lounge with well-founded hopes of getting a seat on the plane to Qatar; we’ve picked out five of the most intriguing potential inclusions, with Southgate set to announce his provisional squad on Thursday.

England’s supply of right-backs is as good as inexhaustible – people have mocked up whole 11s of them, for goodness sake – and even when the injuries start to mount, there’s no danger of a full-blown full-back crisis as a new right-back just spawns. Enter Ben White, whose seamless conversion from highly adept ball-playing centre-half to more or less outright right-back has been a cornerstone of Arsenal’s storming start to the season. With Takehiro Tomiyasu injured, White – who’s won four England caps to date – began the campaign at right-back and has lined up there in all 10 of the Gunners’ Premier League games so far, as well as in his one Europa League outing.

Key to White’s chances of going to the World Cup could be his versatility: with Kyle Walker facing a race against time to be fit for the tournament and Reece James all but ruled out, White is the most effectively adaptable of England’s currently available right-sided defensive options (John Stones can play right-back, but White very much does now). Southgate left the 25-year-old out of his last squad, but he can’t continue to overlook one of the Premier League’s standout performers so far this term – can he? Well, history tells us that he can, to be fair.

White’s great assuredness on the ball makes him an ideal fit for England’s slow build-up play. The former Brighton man has been able to showcase his ability in possession to even greater effect since switching to right-back: per expected assists – on which he averages 1.02/90 – he’s the sixth-most creative defender in the Premier League this season* – and four of the five players who rank above him are free-kick and/or corner takers (Leicester’s Timothy Castagne being the exception).

*Among defenders to play 450+ minutes

Injuries at right-back mean that much-maligned Trent Alexander-Arnold should be taken to the World Cup – but there might be room in the squad for one more supreme set-piece specialist: James Ward-Prowse, who missed the cut for Euro 2020 but has been a squad regular since. The 27-year-old seems to be highly regarded by Southgate, who singled him out for praise after June’s 0-0 Nations League draw with European champions Italy – in which Ward-Prowse played the full 90 minutes.

While Southampton laboured to a 15th-placed league finish in 2021-22, Ward-Prowse excelled (in fact, had it not been for his contributions from midfield, Ralph Hasenhüttl’s side probably would have found themselves in the thick of the relegation battle rather than on the periphery of it). So consistently influential was the Saints captain that he was shortlisted for the Premier League Player of the Season award.

Prior to last month’s thrilling 3-3 Nations League draw with Germany – the final match before the World Cup – England had gone five games without scoring from open play, their longest such run since the turn of the century; if they find themselves similarly struggling to break teams down in Qatar, Ward-Prowse could be a trump card. In 30 years of the Premier League, only David Beckham has scored more goals directly from free-kicks (18) than Ward-Prowse, who – while solid yet unremarkable in other respects – is one of the very best free-kick takers on the planet, no two ways about it (Pep Guardiola has called him the greatest he’s ever seen); he’s curled or – as was the case at Wolves last term – outrageously knuckle-balled in eight free-kicks in the past two-and-a-bit campaigns alone, twice as many as the next player on the list: James Maddison.

James Maddison hardly covered himself in glory last Saturday, diving his way into the book with an embarrassing attempt to win a penalty in the dying embers of Leicester’s largely dismal 0-0 draw with Crystal Palace. It was the 25-year-old’s fifth yellow card of the campaign already, meaning he’s banned for the visit of Leeds on Thursday evening. The incident compounded a poor performance from Maddison, who’s otherwise shone this season for a Foxes team who’ve made one of the worst starts in Premier League history – picking up five points from the first 30 on offer.

Club boss Brendan Rodgers and ex-pros alike have banged the drum for Maddison to be recalled to the national squad – which he’s not been included in since November 2019, when he earned his sole senior cap so far. Speaking after Leicester’s recent 4-0 win over Nottingham Forest – in which Maddison bagged a brace, including a terrific free-kick – Rodgers bemoaned Southgate’s continued overlooking of Maddison. “It’s such a shame,” he said, highlighting his number 10’s excellent goal involvement record since the start of last season (17 goals, 10 assists).

And Rodgers was right to draw attention to that statistic: Harry Kane is the only English player to have been involved in more Premier League goals (26 scored, 10 assisted) since the beginning of 2021-22. One of England’s most natural fits for the 10 role (if Southgate ever goes with a formation which incorporates it), Maddison is in a frustrating position of being a great option in a system the national team rarely opts for.

In Phil Foden and Bukayo Saka, England have two elite left-footed wide attacking options – but Jarrod Bowen’s high-intensity directness offers a different dimension potentially worth having at their disposal. West Ham’s resident Duracell bunny has been named in the last two squads, impressing on his debut against Hungary in June – when he was one of the Three Lions’ few bright sparks in a 1-0 loss to Hungary – and featuring in all four Nations Leagues matches that month.

Bowen enjoyed the campaign of his career last term, scoring 18 goals in all competitions as West Ham finished seventh in the league and reached the Europa League semi-finals. He was one of six players to get into double figures for Premier League assists in 2021-22, with only Mo Salah and Trent Alexander-Arnold providing more than his 10. He was also one of just three to post double figures for both goals (12) and assists, alongside Salah and England team-mate Mason Mount. Since the start of last season, only nine players have more Premier League goal involvements to their name than Bowen.

Barring injuries, Bowen isn’t going to dislodge Foden or Saka – but the fact that those two are at the very top of their game right now could actually work to his advantage: Southgate may opt to start with both Foden and Saka in a front three with Kane, possibly leaving Bowen as the only left-footed attacking option on the bench. Bowen is also one of the Premier League’s handier corner takers: since the beginning of 2020-21, 27% of his corners into the box have found a team-mate; only two players to deliver at least 100 such corners during that period (Pascall Groß and Trent Alexander-Arnold) have been more accurate.

He didn’t make it onto the pitch following his first call-up for last month’s Nations League matches, but Ivan Toney’s form would have to drop off the sheerest of cliffs for him not to be included in England’s World Cup squad. Only Erling Haaland (15) and Harry Kane (9) have scored more Premier League goals than the Brentford striker’s eight in 2022-23. Across Europe’s top five leagues, only Haaland, Kane, Robert Lewandowski (9), Neymar (9) and Lille’s Jonathan David (9) have been on target more times.

After claiming the Championship Golden Boot with 31 goals in his first second-tier campaign in 2020-21 – having joined Brentford from League One Peterborough United – Toney consummately made the step up to the top-flight, netting 12 times. Since the start of last season, only one English striker – Jamie Vardy, who retired from international football after the 2018 World Cup – has outperformed his expected goals by a greater margin (3.21) than Toney (1.78). The 26-year-old has produced some pretty special finishes in that time, including a backheeled nutmeg against Brighton last Friday night and goalkeeper-bamboozling free-kick against Leeds earlier this season. And then there’s his ability from the spot.

Toney’s penalty in Brentford’s 2-0 win over Brighton was the 20th he’s taken for the Bees – and, remarkably, the 20th he’s converted – all with his nerve-shredding (yet evidently highly successful) look-stroll-then-stroke technique. Throughout his career (excluding shootouts), he’s stepped up from the spot 26 times – and missed once. He’s also dispatched six out of seven spot-kicks in shootouts (which we’re mentioning for no particular reason at all). In the five-sub era, Toney is surely a vital weapon to have on your bench at a World Cup.