Nickel Coverage: How the 49ers Defense Has Emerged as the Best Unit in the NFL | The Analyst 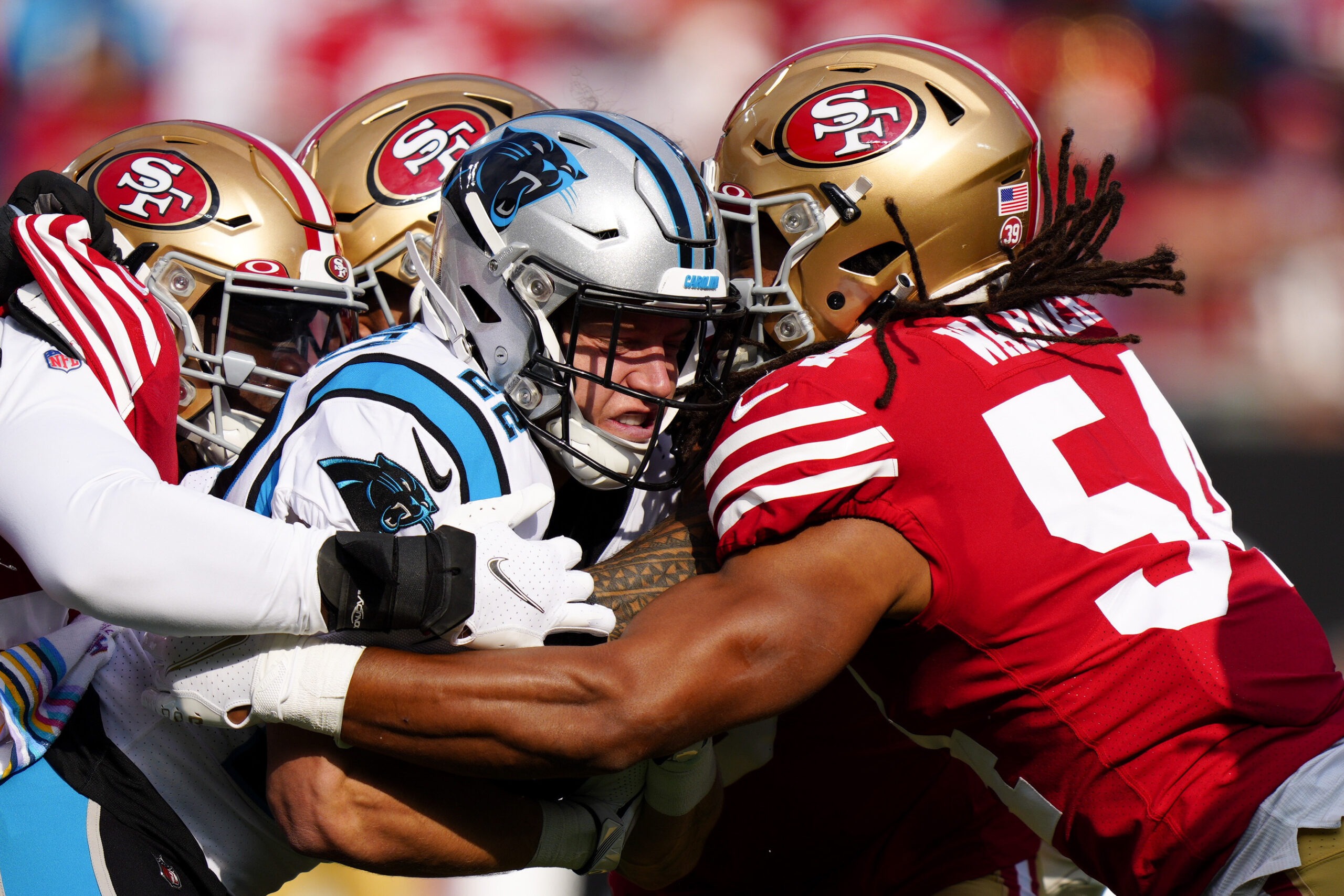 Nickel Coverage: How the 49ers Defense Has Emerged as the Best Unit in the NFL

Through five weeks of the 2022 season, the San Francisco 49ers have the best defense in the NFL.

The Niners have given up just 4.01 yards per play – the fewest in the league – so far, while only they and the Dallas Cowboys have conceded fewer than 20 points in every game.

San Francisco’s points totals allowed in 2022 – 19, 7, 11, 9, 15 – tell a tale of dominance, with Christian McCaffrey’s rushing touchdown against the 49ers only the second the defense has conceded since giving up three in a rainstorm in the season opener with the Chicago Bears.

The 49ers’ average of 12.2 points allowed is tied with that of the Buffalo Bills for the league’s best. They have given up just 12 points in the first half, no other team has conceded fewer than 35. No defense has allowed fewer explosive plays of 10 yards or more than the 49ers (45), and San Francisco has forced a league-leading 44 negative plays from opposing offenses.

The Niners have also given up four yards or more on only 42.9% of first downs – the best ratio in the NFL, and they have allowed a conversion on just 30.0% of the third-down attempts they have faced. The Tennessee Titans (27.1) and New Orleans Saints (29.9) are the two defenses who can claim to have fared better in that regard.

Simply put, the 49ers’ defense is dominating in every facet. The Niners don’t give up explosive plays with regularity, excel at putting opponents behind the 8-ball by creating negative plays and limiting yardage on first down, and have little difficulty getting off the field on third down.

DeMeco Ryans’ defense was already among the NFL’s elite last year, but what has catapulted it to a championship-caliber unit that has the potential to be the foundation of a deep San Francisco playoff run?

The perennial star of the show for the 49er defense is the front, which is teeming with depth at edge rusher and boasts several players who can thrive rushing from that position and from the interior. No team has registered more quarterback sacks than San Francisco (21) and the 49ers’ 91 pressures trail only the Cowboys (95) and Philadelphia Eagles (92).

The athleticism of linebacker Fred Warner, who displays extraordinary precision in zone coverage and can run with wide receivers downfield, is also critical to San Francisco’s defensive success.

Hufanga has demanded attention with his enthralling hard-hitting and all-action brand of football, but just as crucial to the Niners and deserving of similar acclaim has been the play of cornerback Charvarius ‘Mooney’ Ward.

Ward, the 49ers’ big-ticket free-agent acquisition in the offseason, signed a three-year, $40.5 million contract with San Francisco, which viewed him as the missing piece of a frequently maligned cornerback group.

Ward has unquestionably delivered to this point with his performances, combined with the emergence of Hufanga, helping transform the San Franciscor secondary from an area of concern to a clear strength.

Arguably no Niner has done more to prevent big plays than Ward, who has allowed a burn – which is when a receiver wins his matchup on a play in which he’s targeted – on 10 of his 29 targets for a burn-allowed percentage of 34.5% that is fifth among corners targeted at least 20 times.

His big play rate, which tracks burns for 20 yards or more or burns for touchdowns, of 18.0% is 13th for his position. When wideouts have gotten into a position to catch the ball when going against his coverage, they have frequently seen it knocked away. Trevon Diggs (nine) is the sole defender to have produced more pass breakups than Ward’s (eight).

Through his strength in coverage and his proficiency for making plays on the ball, Ward has given the 49ers a lockdown corner they can rely on who offers a defense defined by its diversity even more flexibility.

Indeed, Ward’s ability to consistently shut down wide receivers in man coverage is an asset to the Niners when they want to be more aggressive on defense, with San Francisco thriving through such an approach in the 24-9 beatdown of the Rams in Week 4. They blitzed Matthew Stafford and an injury-hit Los Angeles offensive line on 30.4% of drop backs and were rewarded with seven sacks and 21 pressures.

Ward has also elevated the play of those around him in the cornerback room. Fellow starter Emmanuel Moseley has the third-best burn rate (31.8%) among cornerbacks and nickel Deommodore Lenoir has given up a big play on 15.0% of his targets – a rate bettered by just four corners.

The 49ers will now have to do some reshuffling in the secondary, however, after Moseley suffered a torn ACL in Sunday’s 37-15 rout of the Carolina Panthers. Moseley’s injury may either lead to Lenoir shifting to the outside or one of Jason Verrett, Ambry Thomas or rookie Samuel Womack taking over at the spot across from Ward.

Without Moseley, the opposite side of the field to Ward may be viewed as a potential vulnerability in a defense that has presented none this campaign. But San Francisco’s defensive backfield is better equipped to deal with a serious injury than it was a year ago.

The 49ers’ misfortune may have robbed them of the top-tier starting cornerback duo Ward and Moseley looked like becoming, but their astute investment in the former has ensured that the secondary is now one opposing offenses have significantly less hope of succeeding against.