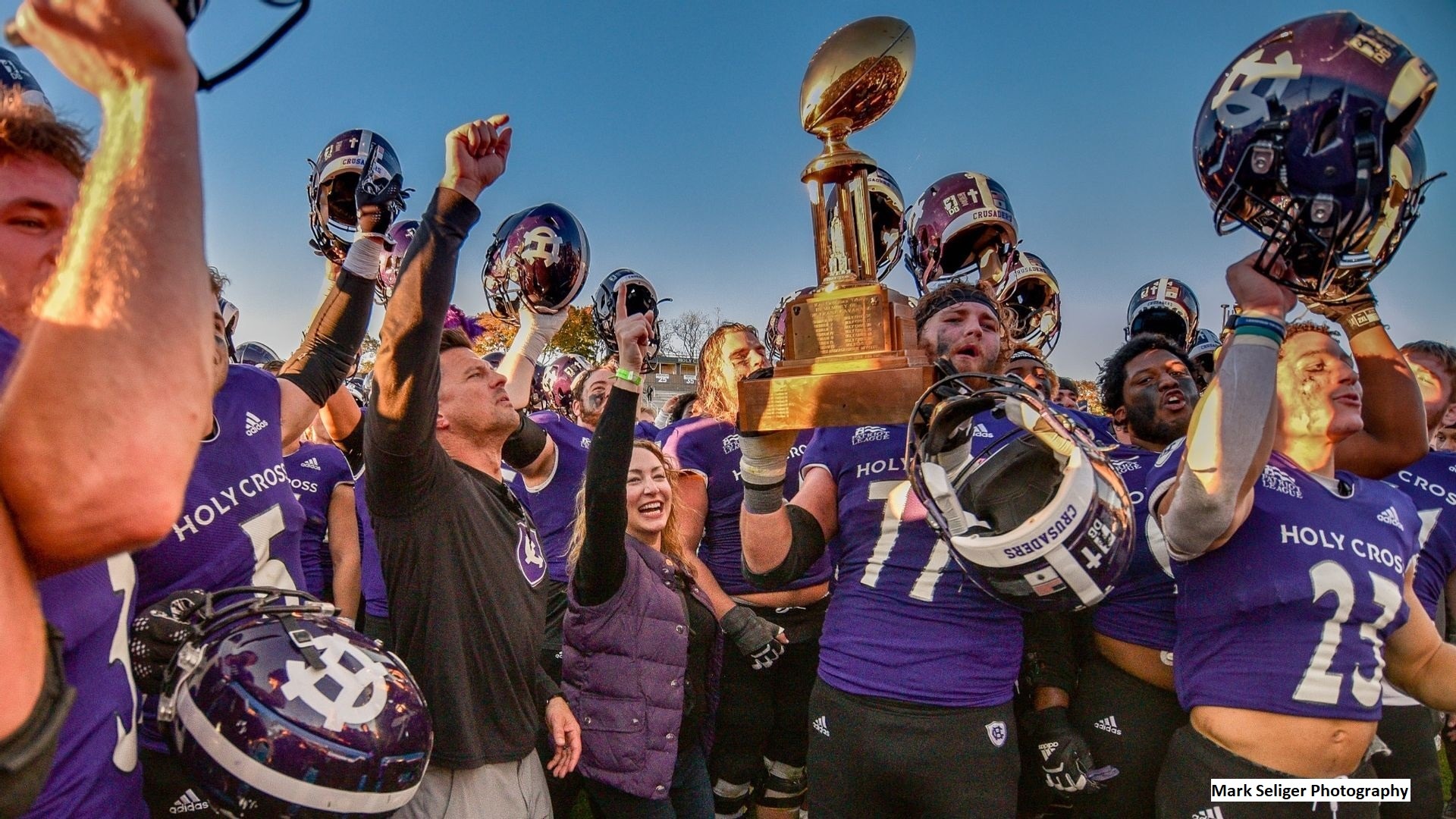 If you want to know how wild Week 9 was in FCS college football, consider this juicy fact:

Eight teams scored 40 or more points and lost their game.

As another 25 teams did the same in wins, no matchup was more breathtaking than Holy Cross’ 53-52, overtime thriller against Fordham.

In highlighting some of the bigger storylines of Week 9, here are eight takeaways:

Holy Cross’ OT Win Over Fordham One For the Ages

The FedEx Ground FCS Game of the Week between Holy Cross and Fordham developed into the Game of the Year to date, and that could have been said even before the host Crusaders (8-0) scored on a two-point conversion to end overtime. In the Patriot League’s first matchup of nationally ranked teams since 2013, No. 22 Fordham (6-2) forged ahead 52-45 on quarterback Tim DeMorat’s 25-yard touchdown pass to Dequece Carter on the first play of OT. The co-No. 5 Crusaders answered with Matthew Sluka’s nine-yard scoring pass to Justin Shorter. They could have gone for a PAT to tie the game, but coach Bob Chesney and his team instead went for the win. Sluka, in a shot gun, handed off to a motioning Shorter as he went from right to left across the backfield. With Fordham’s defense drawn the same way, Shorter flipped the ball back to Ayir Asante, who reversed the other way and went untouched into the end zone for two points. Sluka finished with 465 yards of total offense and five total TDs as Holy Cross retained the Crusader-Ram Cup and moved one step closer to tying the PL mark with a fourth straight title.

Jackson State brought the enthusiasm to ESPN’s “College GameDay” set, then coach Deion Sanders’ ninth-ranked Tigers (8-0) really showed out with a 35-0 blanking of Southern before 53,885 – the first shutout in the SWAC series since 1987 (a 14-0 JSU win). It was a true family affair as quarterback Shedeur Sanders accounted for three first-half touchdowns, including a career-best 42-yard run for a score, and his older brother Shilo had an interception as part of the team’s dominating defensive effort. Southern was held to 221 yards, making the Tigers 8-for-8 in keeping opponents below 250 yards.

Second-ranked Sacramento State (8-0, 5-0) slipped past No. 14 Idaho 31-28 to push its Big Sky winning streak to 16 games. That’s a familiar number with the Hornets, who in coach Troy Taylor’s first two seasons (2019 and ’21) earned a No. 4 seed and first-round bye in the FCS playoffs, but then lost in the round of 16. They’ve been building quite a resume this season, with next Saturday’s game at co-No. 5 Weber State huge as well.

In a rare occurrence for October, Saint Francis has secured the first automatic bid to the FCS playoffs – out of the Northeast Conference. The Red Flash (6-2, 5-0) not only thrashed two-time defending champ Sacred Heart 44-14 behind quarterback Cole Doyle (22 of 28 for 264 yards and five TDs), but they got help from results around the conference. They’re tied atop the standings with two remaining conference games (three overall), but the other team, Merrimack, is ineligible for the playoffs. Only Sacred Heart can catch Saint Francis record-wise, but the Red Flash own the tiebreaker due to their head-to-head win. It will be their second playoff appearance under coach Chris Villarrial (2016).

Great Day to be … Winless?

Seven of the eight winless teams were in action, and five of them posted their first win of the season. In the NEC, LIU outlasted Duquesne 50-48 in two overtimes, giving coach Ron Cooper his first victory with the Sharks (redshirt freshman defensive end Eric O’Neill had five tackles for loss that totaled 37 yards), while Central Connecticut State (1-7) defeated Wagner 34-7. In the Southland, Lamar beat Nicholls 24-17 to end the longest FCS losing streak at 15. Also, Murray State (1-8) defeated Tennessee State 19-3 in the Ohio Valley Conference, and Drake (1-8) beat Stetson 24-17 in the Pioneer Football League.

Montana in Trouble For Playoffs?

Montana (5-3) needs to counter its three-game losing streak with a three-game winning streak to end the regular season or it figures to miss the playoffs. After seven-point losses to Idaho and Sacramento State, it added a 24-21 loss at co-No. 5 Weber State, with backup quarterback Kris Brown subbing for an injured Lucas Johnson and All-America linebacker Patrick O’Connell knocked from the game in the first quarter. The Griz didn’t face a strong schedule outside the Big Sky, and while they will be favored at home against Cal Poly and Eastern Washington, they’ll need to win the “Brawl of the Wild” finale at archrival Montana State to grow their resume.

Stock Up: As has been the case in other seasons, Northern Iowa is trying to make a run to the FCS playoffs following a subpar start. The Panthers, who were 2-4, have reeled off three straight wins, including 37-36 at No. 20 Southern Illinois behind Theo Day’s 330 passing yards and five TD tosses. Now comes the really hard part: UNI next hosts No. 1 South Dakota State, then, following a bye, will go to South Dakota. Coach Mark Farley’s squad surely has to win both games to be in contention for an at-large bid.

Stock Down: The top three teams in the ASUN-WAC power rankings suffered losses – Stephen F. Austin, Abilene Christian and Austin Peay – basically opening up a wild sprint to the regular-season finish line. SFA had been No. 1 in the first three sets of rankings before it stumbled 47-44 at home against a third-year Utah Tech team that had not defeated a Division I opponent since its spring 2021 season debut against Tarleton.

Alabama State’s 24-17 win over rival Alabama A&M drew an FCS season-high crowd of 67,532 to Legion Field in Birmingham. The Hornets ended a four-game losing streak in the Magic City Classic. … No. 1 South Dakota State (8-1) hammered Indiana State 49-7 in the MVFC for its eighth straight win – one shy of the school record. … Quarterback Bret Bushka and Brody Reder both accounted for three TDs as Butler (6-2, 4-1 Pioneer) defeated Morehead State 56-20 for the 600th win in program history. … Marist’s Jim Parady, the FCS’ longest-tenured head coach, earned his 150th career victory when the Red Foxes beat Presbyterian 37-7. … The number of FCS unbeatens fell from five to four when Brown beat Penn 34-31. Aidan Gilman, who came off the bench, threw a nine-yard, game-winning TD to Allen Smith with 1:19 to go. … One week after Samford’s Michael Hiers completed 45 of 51 passes against ETSU, he was 30 of 35 in a 28-3 win at The Citadel. The win coupled with Furman’s 24-20 victory over Chattanooga gave the Bulldogs (7-1, 5-0) sole possession of first place in the Southern Conference. … There was quite an offensive duel in Wofford’s 48-41 win over ETSU. Wofford’s Jimmy Weirick passed for a school-record 409 yards plus three touchdowns, while ETSU’s Jacob Saylors accounted for 369 all-purpose yards (245 rushing) and three TDs. … Big Sky power Eastern Washington entered the 2022 campaign with the FCS active high for consecutive winning seasons at 15, but the run has ended with the Eagles at 2-6 and just three games remaining. Meanwhile, UC Davis has scored 56, 58 and 59 points in its last three Big Sky games to reach a 4-4 record. … Alonzo Graham finished with 123 yards and two touchdowns on the ground, and Morgan State (3-5, 1-2) scored 24 unanswered points in the fourth quarter, in the Bears’ largest win over defending MEAC champ South Carolina State 41-14. Howard (3-5, 2-0) sits alone in first place after quarterback Quinton Williams accounted for four touchdowns in a 49-21 win at Norfolk State, which ended the Bison’s 13-game road losing streak. … No 18 Rhode Island went for a two-point conversion at No. 10 William & Mary after pulling within 31-30 with a touchdown on the final play. Quarterback Kasim Hill had an open lane to the end zone, but Tribe linebacker Isaiah Jones dragged him from behind down to preserve the win. The Tribe and Richmond are both 4-1 in CAA Football, sitting one game behind New Hampshire in the standings. … North Carolina A&T and Gardner-Webb are Big South co-leaders at 3-0. N.C. A&T (5-3) made it five straight wins overall, rallying past Campbell 45-38 behind Bhayshul Tuten (30 carries, 256 yards, two TDs). Gardner-Webb outslugged Bryant 48-40 as Bailey Fisher accounted for 384 yards and six touchdowns, and A.J. Thomas had two of the defense’s three interceptions. … Central Arkansas sophomore Darius Hale needed only 19 carries to rush for 255 yards and two touchdowns in a 64-29 win over North Alabama. … With St. Thomas (7-1, 5-0) ineligible for the automatic playoff bid out of the PFL, it could go to one of the three second-place teams – Butler, Dayton and two-time defending champion Davidson, who are each 6-2 and 4-1. There’s a superb season-ending schedule on the horizon – Dayton will travel to Davidson and Butler will host St. Thomas on Nov. 19.