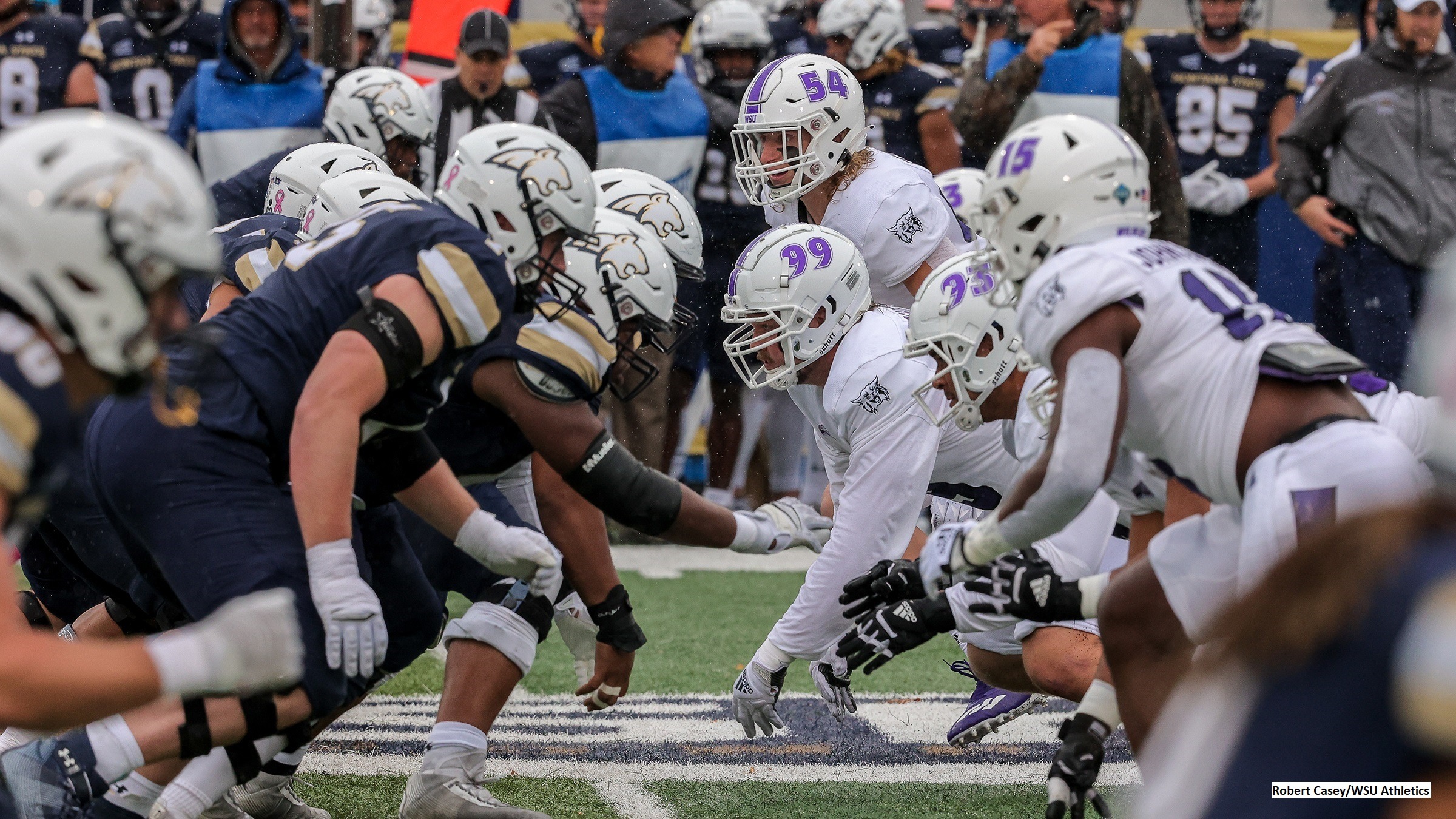 With conference title races continuing to take shape, it felt like the FCS college football schedule was bigger and better this weekend.

There were a season-high five matchups between two nationally ranked teams … and almost as many safeties gift-wrapped for Montana State.

Highlighting some of the bigger storylines of Week 8, especially in a Big Sky that entered with four of the top-seven ranked teams, here are eight takeaways:

Surely, No. 5 Weber State was going to win the special teams matchup with No. 3 Montana State when it scored touchdowns on Abrahim Williams’ 100-yard kickoff return and Hudson Schenck’s 91-yard punt return in the first quarter of their Big Sky showdown. Except the first-place Bobcats (7-1, 5-0) went on to set an NCAA single-game record with four safeties in a 43-38 victory. Wildcats long snapper Grant Sands launched four snaps over punter Jack Burgess’ head – three out of his team’s end zone and one that Burgess knocked out to avoid Bobcats players converging on him. Quarterback Tommy Mellott accounted for 413 yards of total offense and four touchdowns in the Bobcats’ program-record 17th straight home win.

The second half of Big Sky showdowns saw Sacramento State become the last Division I team to fall behind in a game this season before the No. 2 Hornets scored the final 17 points of a 31-24 overtime win over the No. 7 Griz. The Hornets (7-0, 4-0), one of six remaining unbeaten FCS teams, committed four turnovers and had a 15-minute, 52-second deficit in time of possession in regulation. However, quarterback Asher O’Hara rushed for a four-yard touchdown with 3:39 left to help force OT and then again with a seven-yard game-winner in the extra session. After winning just one of the first 21 all-time meetings, Sac State has claimed three in a row against the Griz. Next up is another Big Sky showdown as the Hornets host Idaho (5-2, 4-0), with the winner set to match an idle Montana State in the standings.

That Chattanooga forced a turnover on the opening kickoff set the tone in the No. 10 Mocs’ 41-21 win over No. 11 Mercer in the Southern Conference. They had six takeaways against their shell-shocked visitors, a total they’ve bettered only once in more than 25 years (seven against Samford in 2017). Kameron Brown had a 53-yard pick-six just over three minutes into the game and added a second interception as the Mocs (6-1) improved to 4-0 in conference for the first time since 2016, which is when they last advanced to the FCS playoffs.

Could it be, three Division I transitioning programs – Merrimack, St. Thomas and Texas A&M-Commerce – winning their conference title despite being ineligible for the FCS playoffs? Merrimack (6-2, 4-0) sits atop the Northeast Conference alongside Saint Francis after a 31-25 win over two-time defending champ Sacred Heart (the Warriors will host SFU on Nov. 19). St. Thomas (6-1, 4-0) handled Presbyterian 46-17 to remain the only unbeaten team in Pioneer Football League games. Texas A&M-Commerce (5-2) beat Houston Christian 31-3 to join Northwestern State as a Southland co-leader (next up for the Lions, though, is No. 8 UIW).

Stock Up: North Carolina A&T started the season 0-3 against difficult competition, but has since won four straight games, including a 38-14 defeat of Robert Morris to lift the Aggies to 2-0 in the Big South standings. Jalen Fowler posted career highs with 297 passing yards and four TD passes, and Bhayshul Tuten had his sixth straight game over 100 rushing yards heading into next weekend’s home game against Campbell, which shares first place with the Aggies and Gardner-Webb.

Stock Down: It wasn’t long ago McNeese held the FCS’ longest streak of consecutive winning seasons at 15. It ended with a 3-4 record in the spring 2021 campaign before the Cowboys went 4-7 last fall. They’re guaranteed of another losing mark in coach Gary Goff’s first season, dropping to 1-6 after a 40-35 defeat at Nicholls. The Southland program hasn’t had this bad of a seven-game start in 35 years.

Rhode Island (5-2) outlasted Monmouth 48-46 in a seven-overtime CAA game – the most extra periods ever in a game between two FCS teams. Nasim Hill connected with Ed Lee on a slant for the winning score. Previously, Eastern Kentucky beat FBS program Bowling Green 59-57 in seven OTs on Sept. 10. The most OTs involving an FCS program was Bethune-Cookman’s 63-57 win over Division II Virginia State on Sept. 26, 1998.

Jackson State Defense as Impressive as the Crowd

Even when the offense is a bit sluggish, Jackson State can always rely on its smothering defense. The No. 9 Tigers (7-0) have kept all of their opponents under 250 yards, the latest being Campbell in a 22-14 victory before 51,596 fans on Homecoming Day at Mississippi Veterans Memorial Stadium (the second-most of the FCS season). Linebacker Aubrey Miller Jr. was the defensive star in one of the more intriguing intersectional matchups of the season, collecting 13 solo tackles, including a six-yard sack and one more tackle for loss. Coach Deion Sanders’ squad is allowing just 190.3 yards and 10.1 points per game.

The Ivy League is the only FCS conference with a pair of unbeaten teams, Penn and Princeton at 6-0 each. Princeton pounded Harvard 37-10 to remain without a loss before the month of November since 2017. Penn edged Yale 20-13 on Jonathan Mulatu’s 1-yard touchdown run with 20 seconds remaining. … Wagner (1-6) ended the FCS’ longest losing streak at 26 games with a 37-26 triumph over winless LIU (0-7) in the Northeast Conference. Coby Calvin and Junior Wily scored on interception returns in third-year coach Tom Masella’s first win. The Seahawks’ previous victory also was against LIU on Sept. 28, 2019. … The CAA schedule has broken well for New Hampshire, but the No. 25, first-place team finally earned a signature win, 40-22 over a No. 21 Elon squad that already had victories over William & Mary and Richmond. Dylan Laube, who was sidelined by a shoulder injury a week earlier, had a 77-yard touchdown run and 200 all-purpose yards. The Wildcats are 6-2 overall and 5-0 in the CAA. … South Dakota State tight end Tucker Kraft returned from injury to catch a 32-yard touchdown in the top-ranked Jackrabbits’ 49-35 win at No. 20 North Dakota in the MVFC, but standout running back Isaiah Davis was sidelined by injury and leading tackler Adam Bock was on crutches and wearing a walking boot after leaving the game early on. Quarterback Mark Gronowski accounted for five TDs (three passing, two rushing) as the ‘Rabbits (7-1) matched the longest winning streak of their Division I era at seven. … Youngstown State’s Jaleel McLaughlin has posted back-to-back 200-yard rushing performances and three this season, going for 207 yards and a touchdown in a 28-27 win at Western Illinois. Colt McFadden kicked a walk-off 42-yard field goal. … Richmond quarterback Reece Udinski entered the weekend with an FCS-leading 76.3 completion percentage and raised it even more, completing 30 of 37 attempts (81.1 percent) for 314 yards and three touchdowns in the No. 19 Spiders’ 41-10 win at Hampton. This season, Udinski is 213 of 277 (76.9) for 1,918 yards and 17 TDs against two interceptions. … Samford’s Michael Hiers was even more accurate, going 45 of 51 (88.2 percent) for 442 yards and four TDs in a 55-45 slugfest at ETSU. The Bulldogs (6-1, 4-0) share first place in the SoCon with Chattanooga. … Stephen F. Austin is doing just enough to be in the driver’s seat for the automatic playoff bid in the ASUN-WAC. The Lumberjacks (5-3) won 41-38 at Southern Utah to improve to 4-0 in countable games – the third by three or four points. All-America wide receiver Xavier Gipson had 10 receptions for a career-high 256 yards and touchdowns. … Defending champion South Carolina State won perhaps the biggest game on the MEAC schedule, 26-24 over North Carolina Central. Corey Field passed for three TDs, including two to Shaq Davis. … Trailing 14-13 after three quarters, Southeastern Louisiana (4-3) scored 18 points in the fourth to post a 31-14 road win over a Jacksonville State squad that entered with a 6-1 record. … Not to be outdone in impressive road wins, No. 16 Southeast Missouri scored all of its points in the first three quarters while pounding Northwestern State 51-16. Geno Hess needed only 17 carries to rack up 207 yards, scoring three times. … UIW freshman Kole Wilson scored on two 48-yard punt returns while finishing with 179 yards on seven returns in No. 8 UIW’s 70-0 thrashing of NAIA Faulkner. … The Patriot League showdown is set for next Saturday, but not before Holy Cross nearly got caught looking ahead to Fordham too soon. The No. 6 Crusaders escaped Lafayette with a 24-21 win on Matthew Sluka’s 16-yard scoring pass to Justin Shorter with four minutes remaining. Cornerback Devon Haskins had a monster performance, blocking a punt for the fourth straight game and returning it for a touchdown as well as intercepting a late pass to preserve the win and breaking up three other passes. … Davidson defensive end Jonathan Hammond posted the FCS season high with five tackles for loss (three sacks) in a 48-14 win at Drake. … SWAC program Arkansas-Pine Bluff relieved head coach Doc Gamble of his duties during its bye week. He was 2-5 this season and 8-15 over three campaigns, winning the SWAC West Division title and advancing to the championship game in the spring 2021 season. Offensive coordinator Don Treadwell will serve as the team’s interim coach for the final four games.