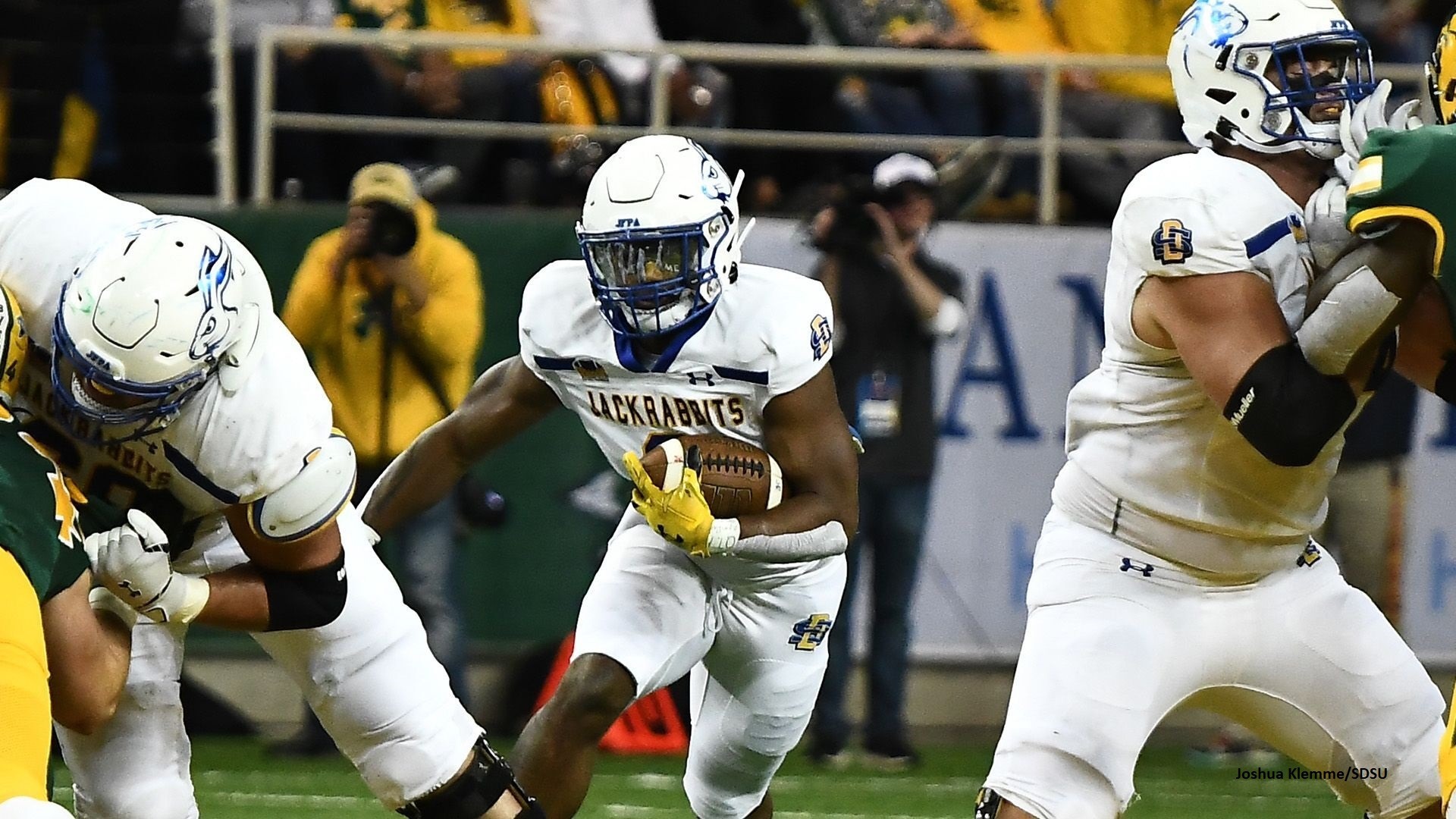 Either the No. 1- or 2-ranked team in FCS college football was going to lose on Saturday, but No. 3 as well?

Hey, such is life in conference play, even more so when it involves rivalry games.

Highlighting some of the bigger storylines of Week 7, here are seven takeaways:

Jackrabbits Down Bison, Will Become No. 1

South Dakota State was the top seed in the spring 2021 FCS playoffs, but the Jackrabbits have never been No. 1 in the national rankings. That will change on Monday because of their 23-21 rally past top-ranked North Dakota State in the subdivision’s seventh all-time meeting of its top-two ranked teams and just the second ever in the regular season. Colby Hueter’s second-quarter interception in the SDSU end zone helped keep the Jackrabbits (6-1, 4-0 MVFC) within 21-7 at halftime, and they went on to score on their first four possessions of the second half – Amar Johnson’s 16-yard touchdown run and three Hunter Dustman field goals, including a go-ahead 18-yarder with 3:49 left. The Jackrabbits have captured the last three Dakota Marker matchups against NDSU (5-2, 3-1).

Adding to the great day for South Dakota State coach John Stiegelmeier, his former offensive coordinator, Jason Eck, earned the biggest win of his first season guiding Idaho – 30-23 at No. 3 Montana in the Big Sky. The Vandals (4-2, 3-0) recaptured the Little Brown Stein, the oldest traveling trophy in the conference, while ending a seven-game losing streak to the Grizzles that dated to Nov. 13, 1999. Wide receiver Hayden Hatten caught nine passes for 149 yards and two touchdowns, and snagged an onside kick with 31 seconds left to preserve the upset.

Even with Montana’s loss, the Big Sky figures to have three top-five teams in the new poll. Sacramento State (6-0, 3-0) remained the only Division I team yet to trail in a game, rolling past Eastern Washington 52-28 behind Cam Skattebo (201 rushing yards, TD catch) and quarterbacks Jake Dunniway (three TD passes) and Asher O’Hara (three TD runs). The Hornets will host Montana next Saturday. Weber State (6-0, 3-0) mauled Portland State 42-7 to set up a showdown at Montana State (6-1, 4-0), which sits atop the standings after a 37-14 win at Northern Colorado. Tommy Mellott returned from a head injury to pass for 217 yards and three touchdowns in a QB share with Sean Chambers.

Stock Up: Unlike the SWAC East Division, where Jackson State is running away from the competition ever since a season-opening blowout of Florida A&M, the West Division has an excellent race. Southern’s 21-17 win over Alcorn State means every team has a loss. It’s surely a three-team race between Southern, Alcorn State and Prairie View A&M, with the latter having the easiest closing schedule as they seek to make a return trip to the conference championship game.

A last name like Payton is perfect for a potential FCS offensive player of the year, and quarterback Fred Payton has No. 12 Mercer at its highest national ranking ever. He fueled the Bears (6-1, 4-0) past defending Southern Conference champion ETSU 55-33 with 383 passing yards and five touchdowns – both career highs. He finally threw his first interception of the season – ETSU’s Chris Hope picked him off in the third quarter – but that’s the only one alongside 21 TD passes. The Bears are in first place, a half-game ahead of Chattanooga, which they visit next Saturday, and Samford.

One Way to the End Zone

In one of the more unique, if not bizarre games of the season, ASUN members Jacksonville State and North Alabama played one-direction football at Toyota Field, a minor league baseball stadium in Madison, Alabama. With only one end zone being the necessary 10 yards deep, all offensive plays went toward it ( as well as the first base dugout), so the ball was repositioned after each possession. Jacksonville State (6-1) got there more often in a 47-31 win, with Anwar Lewis rushing for 165 yards and a pair of TDs, and quarterback Zion Webb both passing and running for scores.

Southern Illinois quarterback Nic Baker connected on 25 of 28 passes for a school-record 89.3 completion percentage record and Javon Williams Jr. rushed for four touchdowns as the Salukis (5-2, 4-0) cruised past Western Illinois 30-7 in the MVFC. … Delaware and William & Mary did the safe thing in CAA Football by taking the weekend off. In a conference with six ranked teams (frontrunning New Hampshire isn’t one of them), co-No. 25 Rhode Island tripped No. 14 Elon 17-10 on Jarrett Wilson’s fourth-quarter pick-six and No. 21 Richmond stopped No. 17 Villanova 20-10. … Dominic Roberto rushed for 252 yards on 25 carries in Furman’s 47-40 win over Western Carolina – the third-most by a Paladin and the top performance since Louis Ivory had 301 on Nov. 4, 2000 against Georgia Southern. Roberto finished with three TDs (two rushing, one receiving). … The co-No. 8 squads both got five TD passes from its star quarterback in a lopsided win – Jackson State (Shedeur Sanders) beat Bethune-Cookman 48-8 and UIW (Lindsey Scott Jr.) beat Nicholls 49-14. Also in JSU’s win, the Tigers scored three times on safeties. … Playing its third FBS game of the season, Gardner-Webb (2-4) fell just short of Liberty 21-20. Narii Gaither (21 carries, 100 yards, touchdown), T.J. Luther (eight receptions, 131 yards, TD) and linebacker Williams McRainey (team-high seven tackles, sack, fumble recovery) had strong performances in the defeat. … North Carolina Central beat Morgan State 59-20 in its MEAC opener as QB Davius Richard passed for four touchdowns and rushed for two more. That’s the most total scores (six) in a game in the school’s Division I history (since 2007). … In interim coach Shawn Watson’s second game, Wofford beat The Citadel 31-16 to end a 16-game losing streak. Jimmy Weirick passed for three touchdowns in a five-minute span of the second and third quarters. … Idaho State first-year coach Charlie Ragle earned his first win, 40-31 over Cal Poly as his defense forced five turnovers (Charles Ike had two interceptions). … In its second season since a leap from Division III, St. Thomas (5-1, 3-0) sits alone in first place in the Pioneer Football League. Gabriel Abel had 18 carries for 100 yards and three touchdowns in a 26-14 victory over Drake. … Also in the PFL, Davidson’s Dylan Sparks and Coy Williams both went over 2,000 career rushing yards in a 28-26 win over Morehead State. … Seth Morgan drilled four field goals as Sam Houston posted a 25-17 road win at No. 23 Eastern Kentucky. … ASUN member Kennesaw State accepted an invitation to join Conference USA on the FBS level, effective July 1, 2024. The Owls were 63-18 in their first seven years as an FCS start-up program, but are 2-4 this season, needing to win four of their final five games to avoid their first losing record. … Princeton wide receiver Andrei Iosivas (6-foot-2½, 200) received the FCS’ No. 1 midseason ranking among 2023 NFL Draft senior prospects by Josh Buchanan of Draft Scout.