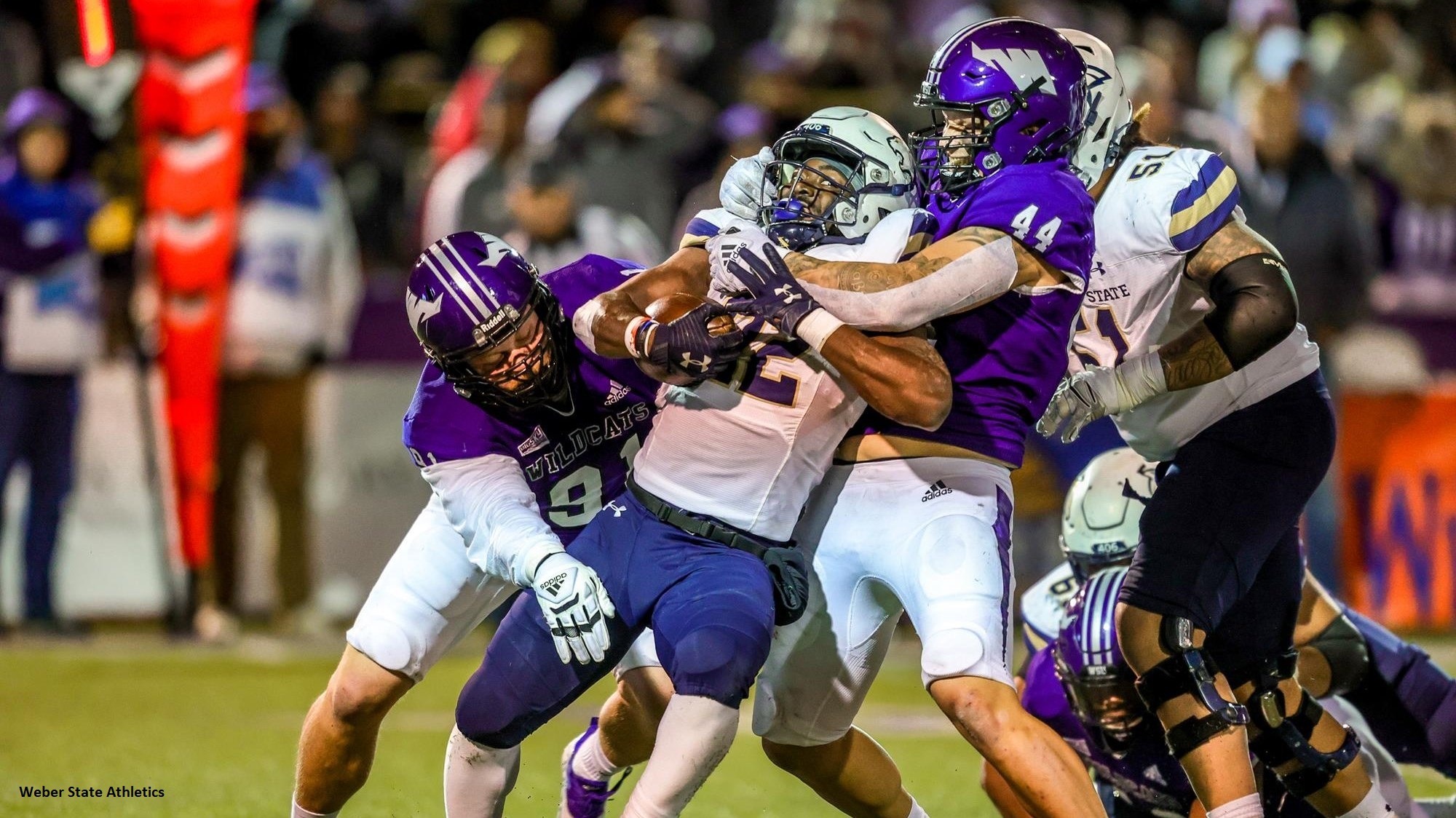 FCS Football Preview and Predictions: Week 8 Games of the Week

It doesn’t get bigger in the regular season than a No. 1 versus No. 2 matchup, as FCS college football enjoyed last week with North Dakota State and South Dakota State squaring off.

However, this week’s overall schedule of games may be better with key matchups from the power conferences on down. There’s even one of the season’s bigger intersectional games with Campbell at Jackson State.

Here are the bigger games in Week 8 across FCS college football (all times ET; all games Saturday unless noted):

Notable: One dominating run will end: Weber State is tied for the FCS’ longest active road winning streak at eight, while Montana State’s 16-game home winning streak also is the longest. The visiting Wildcats have allowed just 11 points per game, ranking second in the FCS. CB Maxwell Anderson is the national leader with five interceptions and the defense is 10th in allowing just 88.5 rushing yards per game. QB Bronson Barron directs a balanced offense (243.3 passing yards per game, 213 rushing). Tommy Mellott returned from injury last week, giving the Bobcats their QB rotation again with last year’s FCS playoff standout and Sean Chambers (16 rushing touchdowns, seven passing). Their offensive line has played at a high level, powering the subdivision’s No. 2 rushing attack (283.6) despite injuries in the backfield.

Notable: Princeton hasn’t lost a game before November since the 2017 season, including a five-overtime win over Harvard last October. The Tigers defense leads the Ivy League in fewest points (11.6) and yards allowed per game (265.6), allowing just 46 rushing yards on average. Crimson running back Aidan Borguet ranks third in the FCS in rushing yards per game (124).

Notable: Yale, which has captured the last four meetings, leads the league in rushing yards per game (241.4), spreading carries between QB Nolan Grooms and RBs Tre Peterson and Joshua Pitsenberger. No FCS team has been better than Penn in an opponent’s red zone, scoring on 21 of 22 chances (15 TDs, six field goals). Quakers DE Jake Heimlicher has 20.5 tackles for loss and 11.5 sacks in his last 15 games, while cornerback Kendren Smith is coming off FedEx Ground FCS National Defensive Player of the Week.

Notable: Elon returns to New England following a 17-10 loss at Rhode Island. In that game, the Phoenix defense finally allowed a second-half touchdown against an FCS opponent, but it’s surrendered just 16 points in six such games. UNH DEs Josiah Silver and Dylan Ruiz, who’ve combined for 13.5 sacks, will pursue Elon QB Matthew McKay, who’s second in the CAA with 296.7 yards of total offense per game.

Notable: Merrimack’s fourth-year transitioning Division I program is eligible for the NEC title, but not an FCS playoff bid until next season. Victor Dawson and Tyvon Edmonds Jr. both surpassed 100 rushing yards last Saturday, and Dawson joins Sacred Heart’s Malik Grant with three-game streaks. QB Marquez McCray of the two-time defending champion Pioneers is coming off a career-high 405 passing yards (in four seasons, they are 12-1 when he’s above 175 passing yards and 5-8 otherwise).

Notable: SCSU swept through the MEAC and won the Celebration Bowl last season, but only edged NCCU 27-24. NCCU QB Davius Richard is coming off the school’s Division I game-record six total TDs (passing and rushing) and has at least one rushing TD in 10 straight games (the FCS’ longest active streak). “Davis” will be heard a lot with SCSU: Shaq Davis leads the MEAC in receiving yards (468) and TD catches (six), while B.J. Davis has 45 tackles and is tied for the conference high in passes defended (seven) as a linebacker.

Notable: Since joining the SoCon in 2014, Mercer holds a 5-3 series edge, including wins in its last two visits to Finley Stadium. Bears QB Fred Payton has a ridiculous ratio of 21 TD passes to one interception, including a combined 15 scores to WRs Devon Harper and Ty James (the only SoCon players with 500+ receiving yards). The Mocs counter with the conference’s top-ranked defense for a second consecutive season as well as rushing leader Ailym Ford (116.7 per game), who’s 65 yards shy of 3,000 in his career.

Notable: Former Gulf South Conference foes meet for the second time since 1978 (SLU won 35-14 in 2019). JSU, under first-year coach Rich Rodriguez, has surpassed last season’s win total (five). Behind Anwar Lewis (624 yards, 7.2 per carry), the Gamecocks are averaging 256.1 rushing yards – up over 103 yards from last season and their best average since 2015. SLU, which has utilized Cephus Johnson III and Eli Sawyer behind center, has a combined eight TD passes in three wins and only one in three losses.

Notable: Northwestern State, whose last Southland title was in 2004, is the conference’s surprise leader at 3-0. With a combined 98 receptions, Demons WRs Zach Patterson (50) and Javon Antonio (48) have the most among any pair of FCS teammates. SEMO is 5-0 against FCS opposition, averaging nearly 39 points. Ohio Valley rushing leader Geno Hess has eight TDs this season and 40 in his career (third-most among active FCS players). The Redhawks have surrendered only five sacks against 215 pass attempts.

Notable: FCS opponents are averaging only 175.4 passing yards and a 54.1 completion percentage against the Camels, who will try to slow JSU QB Shedeur Sanders, who is ranked third nationally in passing yards per game (333) and TD passes (22). Campbell DE Brevin Allen just became the program’s all-time leader in TFLs (38.5) and is tied for the sacks mark (20.5). The Tigers, boasting LB Nyles Gaddy, are No. 1 in the FCS in scoring defense (9.5) and total defense (180.8).

Notable: A week after knocking off North Dakota State, the newly anointed No. 1 Jackrabbits head back north. They could start to mix in RB Amar Johnson (89 yards, TD in second half last week) more with leading rusher Isaiah Davis. QB Mark Gronowski will reunite with All-America TE Tucker Kraft, who hasn’t played since early in the season-opening loss at Iowa. This is UND’s first time hosting a No. 1 since 1990 and it’s the sixth straight time in the Bubba Schweigert coaching era the Fighting Hawks are facing a nationally ranked opponent when coming out of a bye (2-5 overall under him). Tyler Hoosman has three 100+ rushing games and seven TDs to support efficient QB Tommy Schuster.

Notable: This is basically a must-have win for both teams in regards to a potential playoff return. The Bears seek better protection for QB Jason Shelley (29 sacks). UNI counterpart Theo Day matched his career high with three TD passes against Utah Tech last week, and he has at least one in 18 straight games since taking over last season. Panthers DBs Woo Governor and Benny Sapp III both have three interceptions and are part of a three-way tie for the MVFC lead.

Notable: After being upset by Idaho, UM takes on a Sac State squad that has won the last two meetings (2019 and ’21) and remains the only Division I team yet to trail in a game this season. QB Lucas Johnson (19 total TDs) seek a return to his early season level. The Hornets have never started a season with seven straight wins. Their QB rotation of Jake Dunniway and Asher O’Hara directs an offense that ranks fourth nationally in yards per game (519.8) and is second in points per game (48.3).