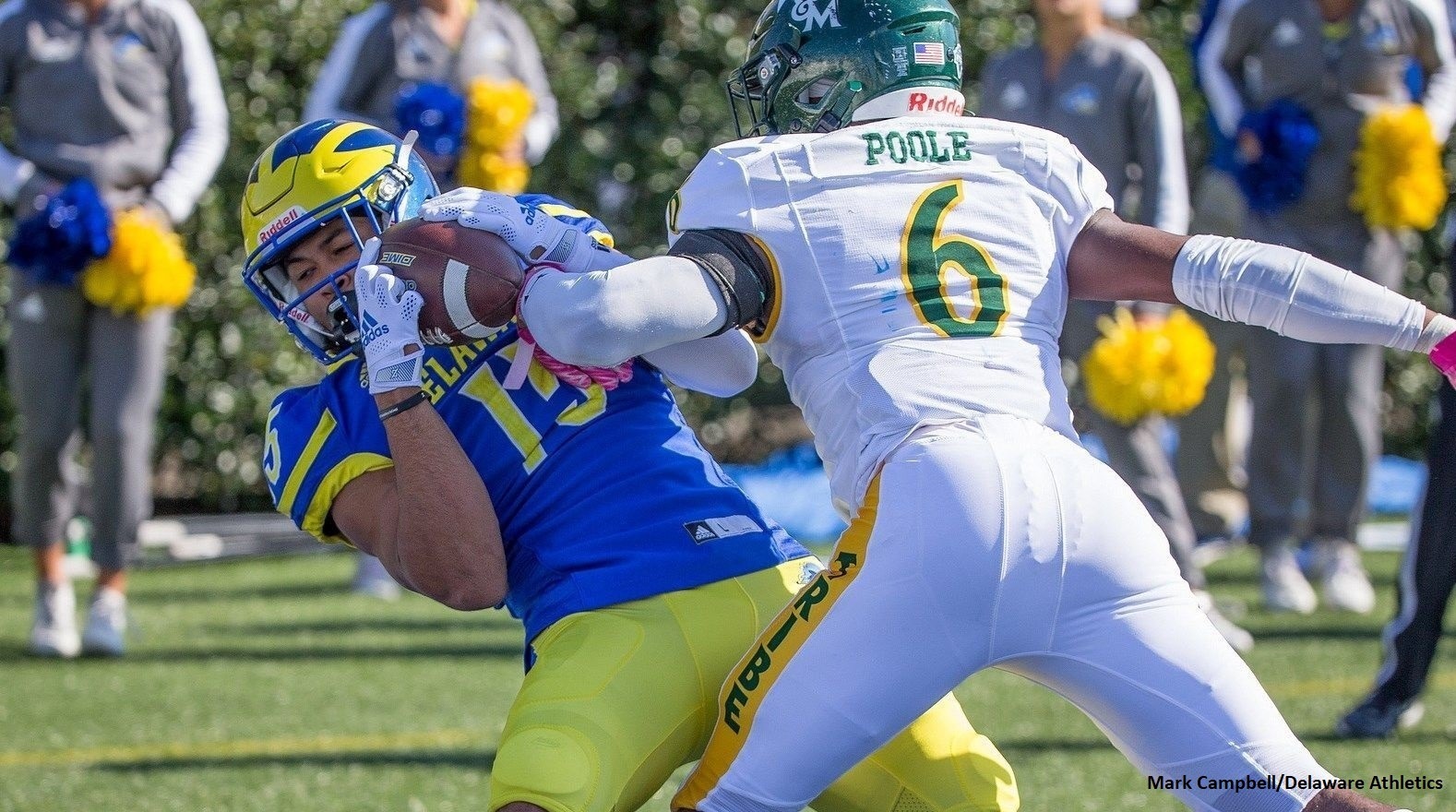 FCS Football Preview and Predictions: Week 6 Games of the Week

Let’s face it, the national champion in FCS college football is not coming out of a conference such as the Big South, Patriot or Pioneer.

We also know an Ivy League school won’t be fighting for No. 1 in Frisco, Texas, come early January.

But the lifeblood of the FCS is as much the smaller conferences as it is national powers North Dakota State, South Dakota State and the Montana frenemies, where a conference championship can mean everything to the schools battling their brethren from week to week.

As title races take shape, the outcomes in October set up a November to remember.

Led by the FedEx Ground FCS Game of the Week, here are the leading Week 6 games across FCS college football (all times ET on Saturday):

Notable: UD’s Nolan Henderson (15-2 career as starter) ranks 10th among FCS QBs in passing yards per game (291.4) and third in touchdown passes (16), while W&M’s offense rolls with the No. 6 rushing offense (241 ypg), led by RBs Bronson Yoder (416 yards, 4 TDs) and Malachi Imoh (306, 7). In defending third downs, UD is third-best in the FCS, allowing just 23.6% of conversions, and W&M is seventh-best at 26.2. The Blue Hens have allowed only one first-half TD, and LB Johnny Buchanan is tied for the FCS high with 11.8 tackles per game. OLB John Pius racked up seven sacks in W&M’s first three games, but only has a half-sack in the last two.

Notable: Overshadowed by the dominance of QB Tim DeMorat (430.6 passing ypg, 26 TDs) and WR Fotis Kokosioulis (49 receptions, 728 yards, eight TDs) is the way RBs Trey Sneed and Julius Loughridge have fueled the Rams to 199.4 rushing yards per game. Lehigh will seek to play keep-away, having rushed for 268 yards in a 35-28 loss to the Rams last season, and a winner of four straight league games since last November.

Notable: Dartmouth has dropped back-to-back overtime games and faces a must-win to remain a realistic contender for a third straight Ivy title (the Big Green haven’t lost three straight games since 2011). Yale will don throwback uniforms to commemorate its 150 years of football, and the team-high carries and rushing totals of Bulldogs QB Nolan Grooms and Dartmouth counterpart Nick Howard feel like yesteryear.

Notable: FAMU has won three consecutive games after a tumultuous start to the season. Transfer QB Jeremy Mousa wisely targets WR Xavier Smith, who has 29 receptions and six TD catches and gone over 3,000 career receiving yards during the winning streak. SCSU needs to rev up an offense that is averaging only 254.3 yards per game. With 40 tackles, LB BJ Davis is well on his way to leading the Bulldogs defense in stops for a third straight season.

Notable: Will it be a red or blue state? Three of the last four meetings have been decided by three points, including USD’s 23-20 win last season on a game-ending, Carson Camp “Hail Mary” TD pass. This season, with Camp one of the more sacked FCS QBs (15), the Coyotes need production out of RB Travis Theis, who has team highs with 297 rushing yards, 12 receptions and three TDs (one in each of the last three games). SDSU RB Isaiah Davis is coming off a career-high 27 carries against Western Illinois, which led to a season-high 199 yards and the first two TDs of his junior campaign. The Jackrabbits are +6 in turnover margin.

Notable: The early season fortunes have been in reverse with SIU on a three-game winning streak and Missouri State on a three-game losing streak. Both defenses have already been hurt by the pass, and it’s one of the better QB duels in the MVFC, if not nation with SIU’s Nic Baker (4,327 passing yards, 36 TD passes in the last 18 games) vs. MSU’s Jason Shelley (average of 307.8 yards of total offense with 45 total TDs in last 17 games). The all-time series is tied 22-22.

Notable: JSU is allowing 185.5 yards per game, which would rank in the FCS all-time top 10 if averaged over a full season. QB Shedeur Sanders ranks second nationally in completion% (75.5) and third in passing yards per game (345.3), and is tied for fourth in TD passes (14). ASU committed 14 turnovers in its first four games, but didn’t have any in a 16-13 win at Texas Southern last Saturday. The Hornets handed JSU coach Deion Sanders his first career loss at ASU Stadium in March 2021, but the Tigers won at home 28-7 last October.

Notable: This is a sneaky good matchup given TTU beat SEMO last year and its offense is up over 75 yards and nearly five points per game while facing a rugged first half of the schedule. RB David Gist is nearing various career milestones with 1,961 rushing yards, 91 receptions and 845 receiving yards. SEMO’s 684 yards of offense against Lindenwood last Saturday ranked second in its Division I history to the 692 it had against TTU in 2018. Geno Hess comes in off rushing for 276 yards while becoming the school’s all-time leader in rushing TDs (37) and overall TDs (39).

Notable: Both high-powered offenses are averaging about seven yards per play. No FCS QB has thrown more TD passes without an interception than Mercer’s Fred Payton (13), with WR/KR Devon Harper scoring seven of his 10 TDs on receptions. WCU QB Carlos Davis is No. 5 in the FCS with 340 yards of total offense per game. Defensively, WCU is allowing 355 yards per game, or on pace for its lowest average since 2005. Mercer is allowing 295.6 on average, its best since becoming an FCS program in 2013.

Notable: Campbell is coming off a 48-18 mauling of previously unbeaten North Carolina Central, with Bryant Barr rushing for a career-high 135 yards and a touchdown. The Camels have never defeated CSU in five all-time meetings, committing five turnovers in last year’s 27-14 loss. CSU had surrendered 495 yards per game, the eighth-lowest average in the FCS. QB Ross Malmgren has only one TD pass since throwing for five in the season opener, but Isaiah Bess connected with WR Vinson Davis for a 97-yard score against Furman – the Big South’s all-time long for a TD pass – in its most recent game on Sept. 24.

Notable: This is a must-win for Southern given its loss to Texas Southern and defending West Division champion PVAMU jumping out to a big start in conference. Jaguars DE Jordan Lewis enters with 52.5 tackles for loss and 37 sacks in his career, while Jason Dumas is coming off SWAC defensive player of the week. In wins, PVAMU is surrendering on average only 94.3 passing yards and 240.7 total yards.

Notable: ACU is off to its best five-game start since it played in Division II in 2011, while SFA has yet to live up to its No. 9 preseason ranking. Wildcats RB Jermiah Dobbins is coming off the first two 100+ rushing performances of an 18-game career, while WR Kobe Clark to continues to build on a huge career (227 receptions for 2,477 yards and 17 TDs). In three career games against ACU, SFA QB Trae Self has averaged 338.7 passing yards per game with 11 TD passes and only one INT.

Notable: EWU has a short week after a Sunday game at Florida and now a trip to Weber State, where the Eagles seek to avoid a fourth straight loss to the Wildcats since 2017 and their first four-game losing streak since 2011. QB Gunner Talkington seeks to build on an 11-to-3 TD pass-to-INT ratio against WSU’s pass defense (50 completion%, 10 INTs). The Wildcats, who have the longest active FCS winning streak at six, is 13-0 when sixth-year senior Josh Davis reaches 100+ rushing yards.