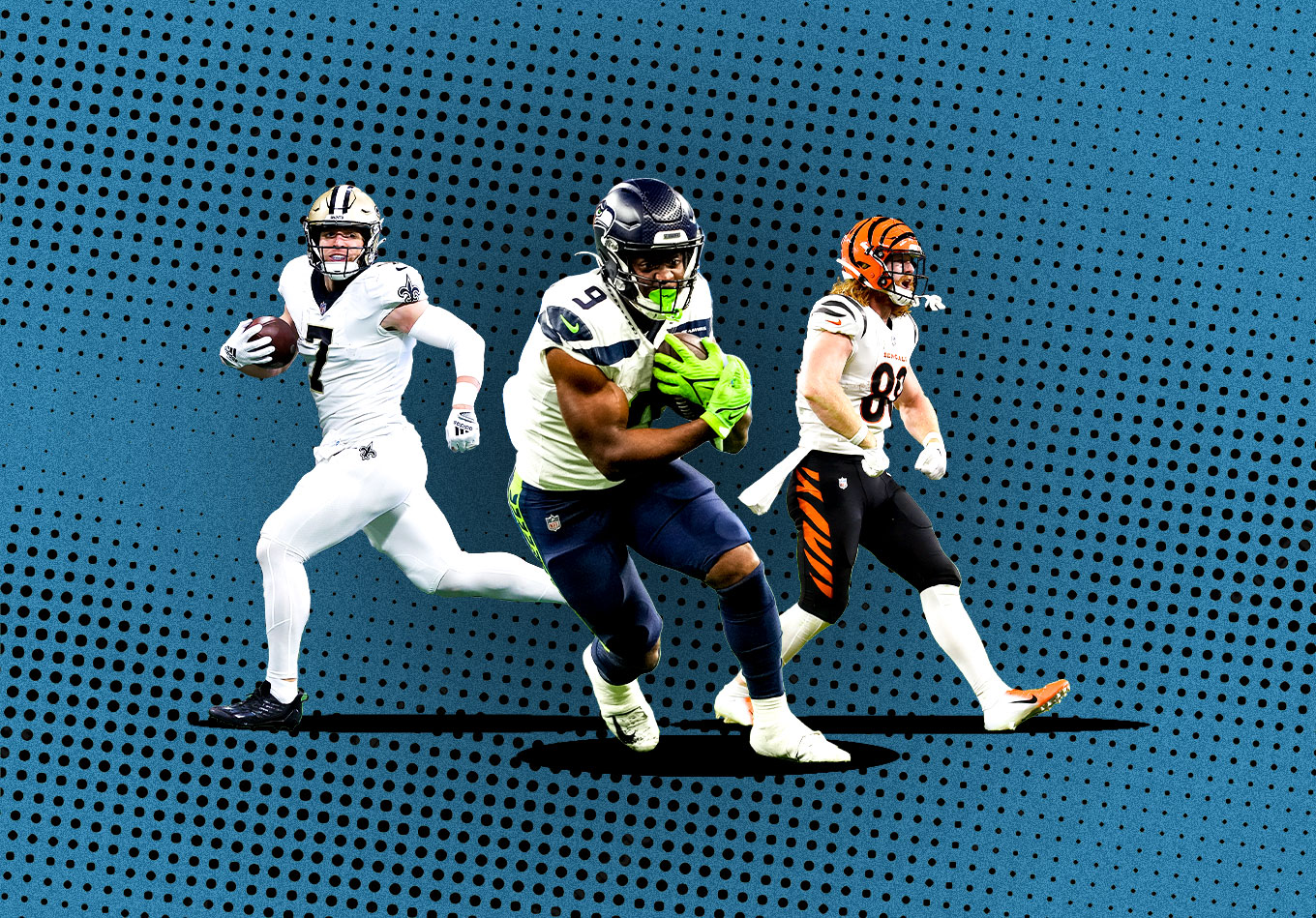 We can put a fork in Week 5. It’s time to look forward to Week 6 with fresh eyes and fresh hope.

If you find yourself in a 1-4 hole, or worse, have no fear (okay, maybe a little) because the fantasy football waiver wire might be able to help you.

We continued to see some fascinating games in Week 5 and there remains a lot of volatility in usage of players — one day we will do a retrospective on the New York Giants wide receiving corps in an effort to understand what the plan was.

There were some big injuries too. Miami Dolphins quarterback Teddy Bridgewater played just three snaps before he went off with a head injury and remains in concussion protocol. That had a massive affect on Jaylen Waddle’s fantasy production for the week, but it certainly helped Raheem Mostert, who had his biggest game of the season and is now the Dolphins’ undisputed No. 1 back. Seattle Seahawks running back Rashaad Penny’s injury is the big news this week and there’s no doubt as to who will replace him.

Matt Rhule’s firing might breathe life into a hopeless fantasy outlook for every Carolina Panther aside from Christian McCaffrey. We need time to asses that situation because with Baker Mayfield as the starting quarterback, we remain skeptical.

Looking ahead, Thursday night brings a Chicago Bears versus Washington Commanders matchup. The 3-2 Baltimore Ravens play the 4-1 New York Giants. The Los Angeles Rams look to get their season back on track versus the Carolina Panthers, who have a new head coach.

The spicy New York Jets and Zach Wilson play a curious Green Bay Packers team fresh off a vacation in London. The biggest game of the week is the Kansas City Chiefs vs. the Buffalo Bills. Patrick Mahomes, Josh Allen and Jalen Hurts are the frontrunners for the MVP award and this matchup on Sunday night is filled with fantasy interest.

This is the clear top waiver-wire pickup of the week. If your running backs are letting you down, Walker can change your season. The rookie was predicted to start eating into Rashaad Penny’s workload at some point in the season, but that process was expedited by the broken leg Penny suffered on Sunday. After Penny limped off, Walker had 88 yards and a touchdown on eight carries.

Walker is a rookie, but here is what NFL.com said about him heading into the NFL Draft: “He can find his own yards with twitchy directional change when run-blocking breaks down and possesses plus-rated contact balance to add on to his yardage throughout the game…Walker would benefit from better rush-track discipline, but his explosiveness and unpredictable style should still lead to success as a future starter.”

In Week 5, Walker led all running backs with at least eight carries with an average of 9.75 yards before contact. His 11.0 yards per carry was the highest mark among that group too. We might be ready to see the kind of explosion from Walker that will tilt fantasy leagues in your favor (if you can get him).

You might have to sit tight and accept some down weeks with Hill, but the New Orleans Saints offense is unsure of itself right now and that is fertile ground for Hill. He has a rare skill set because he carries the ball like a running back, passes like a quarterback and is even tight-end eligible in some leagues. And nobody seems to be able to stop him. He didn’t catch a pass on Sunday, but he threw a touchdown pass and carried the ball nine times for 112 yards and three touchdowns.

The Saints tweet perfectly sums up how to define Hill. Forget labels.

Jameis Winston is out injured and struggling with myriad physical complaints. Andy Dalton provides a steady if unexciting option in his stead. Michael Thomas is banged up and after that, we’re looking at a who’s who of mediocre receiving talent on the depth chart (Chris Olave aside). Hill is the differentiator.

On 23 snaps on Sunday, he played 11 at QB, six as a running back, four as a tight end and another two in the slot. Tight end has been disappointing this season outside the top players at the position, but Hill in that slot could give you massive upside. He has five touchdowns through five weeks and a passing touchdown too.

You can officially start to count on Moore. It’s worth noting that DeAndre Hopkins will finish his six-game suspension after next week and this receiving corps will look different, but Moore had a season-high 68 yards and seven receptions on Sunday. This offense is kind to slot receivers. Christian Kirk broke out last season in Arizona, finishing as WR28 in PPR leagues and Moore could be set to add similar fantasy value moving forward.

Moore was injured for the first few weeks of the season, but he’s healthy now. While Marquise Brown and Hopkins occupy the secondary, Moore can thrive underneath. Kyler Murray has attempted more passes (215) than any other QB in the league, which means there should be more than enough volume to go around.

Greg Dortch totaled 21 targets in Moore’s absence through the first three weeks, but Moore has had five and seven passes come his way in the last two weeks. This could be an important flex play moving forward.

This could have easily gone into the “situations to watch” section, but it’s Week 6 already. Now is the time to be brave.

Last week, Pierce had more targets, receptions and yards than Michael Pittman Jr. This is not a home run and that won’t continue weekly, but Pierce has a better chance than anyone of becoming the Colts’ No. 2 receiver. Pierce is second on the team in yards (222) and leads the team in yards per catch (14.8) among those with five receptions. He’s also third on the team with 15 catches and is coming off his best game as a Colt.

Pierce saw his highest percentage of offensive snaps (59.5%) in Week 5. Fifteen of his 22 targets have come in the last two weeks and his receiving yards topped 80 last week for the second consecutive game. As a rookie, it takes time to assimilate to the NFL, but once that assimilation is complete, breakouts happen. Pierce might be ready for such a rise.

We thought we would get a clearer picture of the Falcons running-back group on Sunday, but it looks like we’ll need more time. Williams’ return from injury should muddy the waters even further, though he he has a chance to take the top spot in the Falcons backfield.

The Falcons averaged 4.9 yards per carry on 31 rushes on Sunday. Tyler Allgeier led the group with 13 of those attempts – a 41.9% share. Caleb Huntley had eight carries and Avery Williams had a red-zone carry and a touchdown. Allgeier has played in 37.0% of the Falcons’ snaps, which is the highest mark among healthy players. Williams, however, was the starter in Week 1 before his injury.

Cordarrelle Patterson is on injured reserve and the way the running back by committee share is split, we might be telling you to stay away from this group in a couple of weeks. For now though, Williams is available in most leagues and it might be worth adding him to your bench for future weeks.

If Meyers is healthy, he starts. It’s that simple. He missed Week 3 and 4, but in his three games, he has played in 80% or more of the offensive snaps. On Sunday, he finished with seven receptions for 111 yards and a touchdown.

The discrepancy between his rostered percentage on ESPN and Yahoo is a sign of how uncertain fantasy owners are on him. His earlier absence due to a knee injury shouldn’t distract from the fact that he is the Patriots’ leading receiver.

Last week, Meyers’ 87.5 burn percentage was second in the league among wide receivers with at least five receptions. Only Justin Jefferson had a better mark. Meyers is ranked 41st among wide receivers this season while only playing in three games. If he stays on the field, he can jump into the top 20 and possibly the top 10.

Smith has thrown two touchdowns or more on four occasions this season and the only time didn’t was against the elite San Francisco 49ers defense. On Sunday, he had big gains of 50, 40 and 35 to DK Metcalf and Tyler Lockett, who are proving to Russell Wilson that the grass is not always greener. Metcalf and Lockett are wide receiver 22 and 12, respectively, in fantasy football.

Smith’s 13.33 air yards per attempt in the NFL’s Week 5 was second only to Josh Allen’s 13.5. Smith’s QB rating of 113.2 is the best in the league and his 8.31 yards per passing attempt is behind only Tua Tagovailoa and Jalen Hurts.

Here’s a very bold prediction. Hurst will finish the season as a top-10 tight end, and closer to top five than outside of the top 10. Hurst has back-to-back games with touchdowns and had a season-high three receptions in the red zone on Sunday night during the Bengals’ loss to the Ravens.

Hurst had been battling injuries and is still the TE12 in PPR with 47.7 points in five games. He doesn’t gain a huge amount of yards (157), but the targets (28) and receptions (20) make him a top-10 candidate. If he can continue to catch touchdowns, he will become a certified starter.

He has six targets in the red zone and that’s tied for seventh in the league among tight ends. He’s healthy now and his arrowing is pointing up.

James Conner and Darrel Williams both suffered injuries and Eno Benjamin ended the game with eight carries and four targets. If Conner or Williams are out, Benjamin might become a flex option.

Benjamin has played 129 offensive snaps to Williams’ 78. He also has six rushing attempts and three targets in the red zone. With that volume and his 12 receptions in limited playing time, any injury to his backfield colleagues would bump his fantasy status to relevant.

Nyheim Hines went off in the first quarter during the Colts’ victory over the Denver Broncos on Thursday night and Jackson led the backfield with 13 carries and four catches for 29 yards. Phillip Lindsay, however, could see more time given it was his first week after being elevated from the practice squad.

Jackson’s 2.92 yards before contact led the Colts backfield on Thursday night. His 7.25 average burn yards on his four targets also led the team. This is somewhat of a moot point if Taylor comes back healthy, but Jackson might be a good handcuff if you have the luxury to stash players on your bench.