Buzzworthy: How LaMelo Ball Can Continue His Meteoric Rise | The Analyst 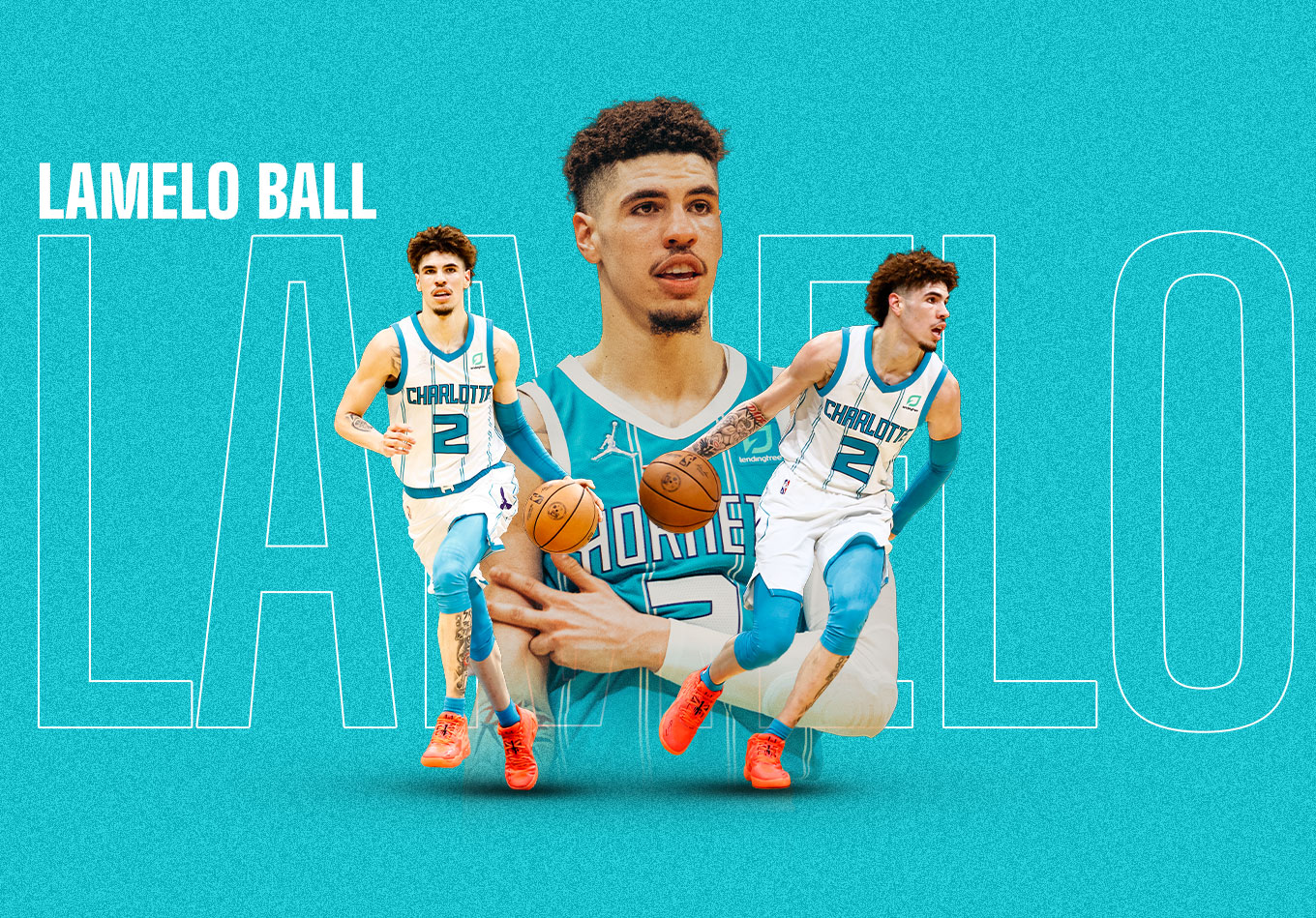 Buzzworthy: How LaMelo Ball Can Continue His Meteoric Rise

The conclusion of the Charlotte Hornets’ past two seasons has been a 2020s reboot of “Groundhog Day.” Each time, they’ve entered the Play-In Tournament as the 10 seed and endured blowout defeats to wrap up their year.

To the Hornets’ credit, at 43-39, they did notch their first winning season since 2015-16, so there was some tangible progress. But the objective of ending a five-year playoff drought remained unaccomplished this past spring.

Despite that, franchise centerpiece LaMelo Ball made significant strides. Earning his first All-Star berth, he became the eighth Hornet in history to garner such a recognition. He logged nearly 1,000 more minutes than he did as a rookie. He averaged 3.2 more points per 100 possessions and raised his relative true shooting by 2.1 points (minus-3.3 vs. minus-1.2). Once a distant third on the team in scoring as a rookie, he was narrowly edged out (20.2 vs. 20.1) by Miles Bridges for the top spot in 2021-22.

The foundation of Ball’s scoring rise stems from emerging as a dynamite long-range marksman. For years, rampant skepticism revolved around his jumper. Yet he’s consistently refined his mechanics and effectiveness, and really rocked out in his sophomore campaign.

Ball struggled to score inside the arc, particularly around the rim, during 2020-21, so his counter was to up the perimeter proficiency. He boosted his three-point rate from .388 to .451 and his three-point percentage from 35.2 to 38.9. He took 304 more triples and converted 128 more. Although the massive jump in playing time magnified that divide, he elevated to a radically different stratosphere as a shooter last season.

He’s a remarkably malleable offensive player, and his multifaceted shooting prowess helps illuminate that. Often spotting up well beyond the arc, he boasts extensive range. He can flow through off-ball screens or handoffs and launch on the move. He’s unbothered by closeouts or a hand in his grill. The stability he exhibits on his threes is a staggering transformation from his early NBL days with the Illawarra Hawks or final high school season with SPIRE Institute.

His space creation for stepbacks is reminiscent of a receiver dusting a cornerback on a pristine curl route. Go under a screen and he reserves zero hesitation about bombing away. He shot 42.5% on catch-and-shoot looks and 34.1% off the bounce, both improvements from 2020-21, in addition to a volume spike in each facet. The dude was an esteemed shooter at 20 years old and is riding a perpetually upward trajectory over the past half-decade.

As a result of Ball’s fear-invoking long ball, defenders are quick to bite on fakes or send hurried closeouts his direction. He can reliably parlay his jumper into driving lanes and chances to scatter the defense. His brilliant passing vision and instantaneous processing, along with Charlotte’s bevvy of credible floor-spacers, ensured he could capitalize on those opportunities.

He’s generating 1.00 point per possession on shots at the rim (excluding fouls) and 1.13 PPP on his threes. That is partly a nod to his efficiency from deep, though it is also a troubling reality for his finishing resume thus far.

By failing to pair him with a dynamic play-finishing big, Charlotte hasn’t aided his interior forays. Defenses can prioritize him when he’s complemented by the likes of Cody Zeller, Bismack Biyombo and Mason Plumlee as rollers.

Maybe 2022 first-round pick Mark Williams develops into the lob threat Ball could greatly benefit from; Ball’s dexterity would enable him to blur the lines between a lob and floater, a la Darius Garland or Trae Young, fellow young guards flanked by aerial partners. The few times his big’s presence chiseled space inside reveal how much easier these instances may unfold with a reliable roller.

For now, though, the significant hurdles speak more to his individual warts than the surrounding personnel, even if the latter is relevant. So many of his layups require circus-level ingenuity and contortion. There aren’t many seamless scores around the cup.

He appears to relinquish his feathery touch when finishing at full speed; better blending changes in tempo would aid him. Guys like Young and Ja Morant excel at navigating congested quarters because of their pacing and handle. Ball brandishes the latter and is missing the former, albeit he is much taller. He is quite flexible still, a trait that propels Morant to superstar paint production.

Morant, of course, is also in a different galaxy as a vertical athlete, so the parallel isn’t ideal. The main points stand, though, and distinguish why those two are All-NBA guards, while Ball is aiming to join that club (he’s younger and only entering year three, so it’s OK he’s a bit behind currently). He does not yet thrive in tight spaces; remedying that may be critical.

From a general sense, a layup is a much more efficient shot than a floater or midrange jumper. But the layups Ball regularly attempts are not easy and pursuing them places him in troublesome spots on the floor. They’re erratic reps. His poor vertical explosion, middling length (6-foot-9 wingspan) and insufficient core strength coalesce for a bunch of arduous attempts.

As to provide ample time for his creativity to simmer, he takes off from so far out, which leaves him below the rim and swimming upstream. Creativity can’t be the bedrock of his approach. The final stages should be easy, and they’re not for him.

His jumper, pick-and-roll savvy and ball-on-a-string handle empower him to generate paint touches frequently. To better utilize these instances and be more discretionary with his at-rim attempts, incorporating a midrange pull-up may factor prominently into the solution.

Presumably due to a lack of core strength, Ball isn’t typically comfortable hoisting actual jumpers off forward momentum. Most of his midrange volume is either a deep floater or pull-up where he’s drifting backward, the latter of which can necessitate more time to manifest. The midrange is almost always a vital complement in the postseason. Defenses will sell out against his threes and coax him elsewhere. He needs a midrange rebuttal that doesn’t warrant such a regimented delivery.

Further refining his core stability and footwork when operating downhill should be an emphasis. All his midrange shots cannot unfold like this. They’re too narrow in scope and require lengthy time to percolate. You need more concise avenues, especially if the finishing is going to be so dicey.

The limitations around the basket and from midrange hinder Ball’s half-court scoring viability. In addition to his subpar two-point percentage, his career 43.9% true shooting clip in 166 clutch minutes, per NBA.com, also underscores these woes.

He’s absolutely grown in how he plays through contact and handles physicality, but mobile length can stymie him when folks deter his triples, expose his slow 0-60 acceleration and stay attached inside the arc. Charlotte was ranked among the top five in transition frequency both seasons to amplify his open-court artistry and mask some of his standstill creation flaws.  Last year, he applied his 6-foot-7 frame and slippery handle to overwhelm defenders more commonly than prior seasons. While shortcomings persisted against some rangy wings, his growth withstanding physicality and maximizing his size as a tall initiator were evident. The hope would be to maintain and fortify that growth to widen his two-point horizons. The film is a mixed bag, but the mere fact he’s having increased success already is encouraging.

Four years ago, I began studying Ball’s game in-depth for the first time. I liked his combination of passing, handling and feel, only to hold reservations about his strength and high-volume scoring potential. I was optimistic about his jumper long-term. I settled on rating him as a very good prospect. After a superb NBL stint that showcased development in paramount areas, he eventually and staunchly graced the top of my 2020 Draft rankings. I squarely considered myself an ardent supporter.

I still am an ardent supporter. He resembled a top-30ish player in his second season and progressed in various ways; he’s really freaking good, even without any age caveat. I expect him to again ascend the ranks during his age-21 campaign. He might do so by continuing to evolve as a long-range shooter and populate the truly elite tier of snipers who merge versatility, gaudy volume and high-level results.

Or, he might broaden his two-point scoring toolkit, borrow tricks from his rising star contemporaries, dial up the physicality and strength once again, and patch up the holes of his game to solidify offensive superstardom. The playmaking and three-ball put him in contention. The last step trails behind and might be the most complex and crucial part to address.