Bodø/Glimt: Inside the Arctic Circle Fairytale | The Analyst 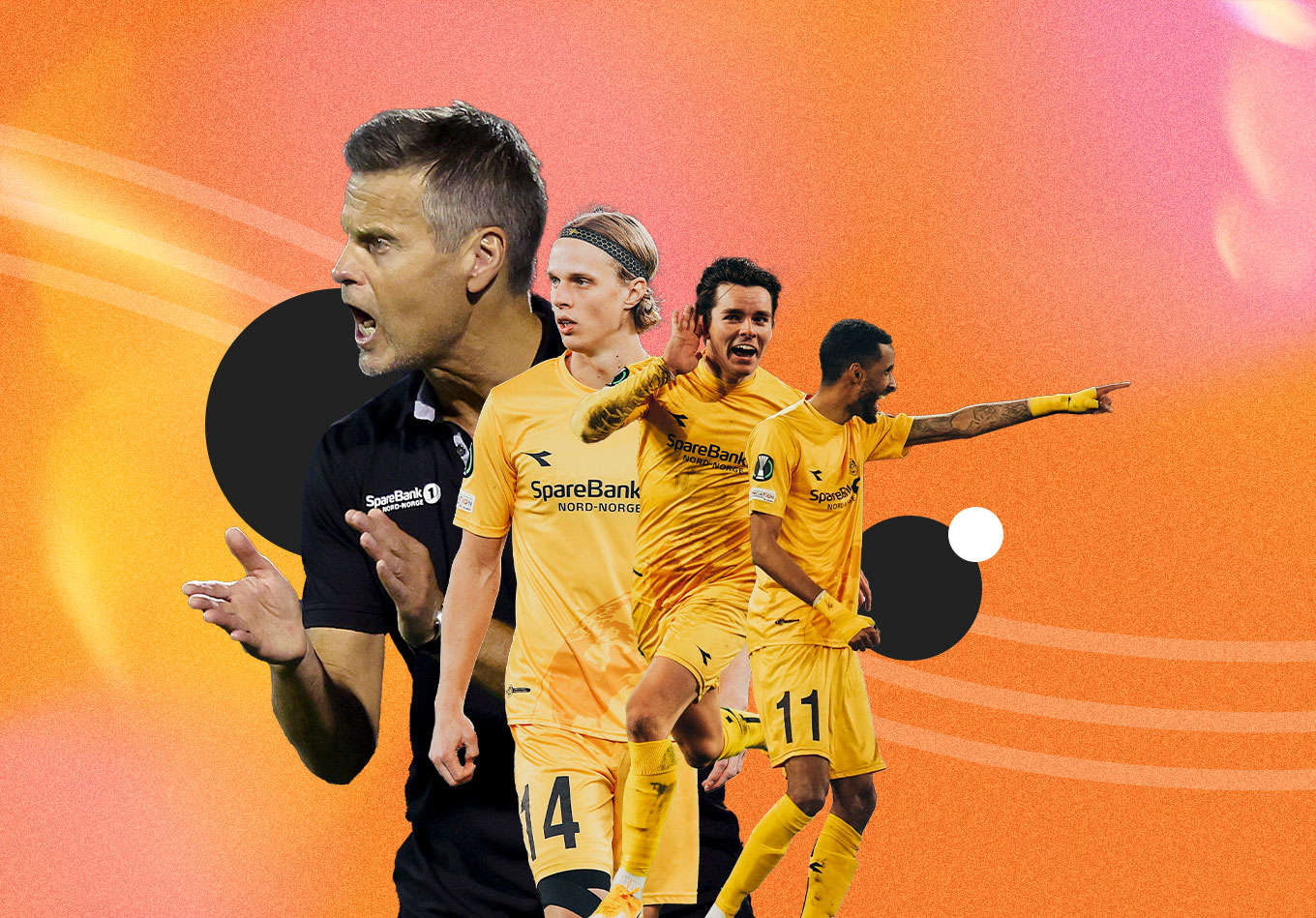 Bodø/Glimt: Inside the Arctic Circle Fairytale

Every football fan loves an underdog story. Denmark winning the European Championship in 1992. Greece lifting the same trophy 12 years later. Leicester magnificently claiming the Premier League title in 2016. Yet in Bodø, a small fishing town just north of the Arctic Circle, perhaps the greatest underdog story of all is taking place.

A perennial yo-yo club, Bodø/Glimt had spent seven of the previous 12 campaigns in the Norwegian second tier prior to their promotion to the Eliteserien in 2017. Glimt were viewed as relegation fodder heading into their first season back in the top flight in 2018 and seemed to be living up to type in the opening months of the campaign, winning just three of their first 14 games. It was head coach Kjetil Knutsen’s managerial bow in the Norwegian top flight after a re-shuffle among the club’s hierarchy had seen him promoted from assistant manager in the off-season. Despite the slow start, officials at Glimt kept the faith in Knutsen and it paid dividends as the club narrowly avoided relegation by three points. Bodø/Glimt’s improvement on the pitch under Knutsen had been clear for all to see.

With a side made up of academy graduates and astute pick-ups from lower-level clubs, expectations were rather low ahead of the 2019 campaign. Very few foresaw the exponential rise of Glimt in the following season. Banded together by an underdog mentality, the club began to pick up results and even topped the league table midway through the year. However, injuries to key attacking counterparts Amor Layouni and Geir Herrem saw Molde move above them in the standings. But Knutsen’s side remained resilient and lost just once in 14 games in the closing stages of the season to finish in second place and qualify for Europe. Knutsen also picked up the Manager of the Year award in Norway.

After losing several key players at the end of the season – most notably midfielder Håkon Evjen to AZ Alkmaar – there were doubts surrounding Glimt’s ability to replicate their terrific exploits in the 2020. But write the Yellow Horde off at your own peril. Knutsen’s side started the year off in tremendous form, scoring 10 goals in their opening two games. Glimt had traditionally been a counter-attacking team that relied on a hardened defence to achieve results.  Yet Knutsen had built a ruthless side that suffocated opposition with their free-flowing expansive football. They operated with a 4-3-3 and played with a style that has often been described as ‘kamikaze football’.

Wingers Philip Zinckernagel and Jens Petter Hauge would stretch opposing defences with their persistent pressing, while the rest of Knutsen’s charges would press as high as possible to catch them on the break. Bodø/Glimt engulfed sides and continued to build momentum in the Eliteserien, despite cynics still questioning their title credentials. However, that all began to change after a sensational 3-1 victory over champions Molde in July – sealing their 10th win in their opening 10 games of the season. Knutsen’s side just did not look like slowing down.

And truth be told, they didn’t.

Glimt capitalised on Molde’s mid-season stutter to extend their lead at the top of the table to double figures. The Yellow Horde maintained their unforeseen trajectory throughout the course of the season, dismantling sides only a weekly basis. Even the apparently insurmountable loss of Hauge to Milan in October, just days after losing 3-2 to the Rossoneri at the San Siro in the qualifying rounds of the Champions League did not derail their campaign. Bodø/Glimt romped to their first ever league title in 2020, shattering almost every record imaginable and becoming the first side from northern Norway to win the league.

Glimt recorded the highest ever points tally in the Eliteserien (81), while also clinching the title by the largest ever points margin (19). Knutsen’s side lost just one game all season, a 4-2 defeat away to Molde when they were forced to rotate the starting 11 due to the compressed schedule. The Yellow Horde scored a hatful of goals across the year, celebrating the title victory with a 5-1 win against Rosenborg. Glimt also broke the record for the most goals scored in a single season in Norway (103) and finished with a goal difference of +71 – the greatest ever goal difference recorded in the Eliteserien.

Knutsen’s swashbuckling style had taken the whole division by surprise and Glimt became the first side to score in all 30 games of a league season. At the forefront of that was attacking trio Hauge, Zinckernagel and Kasper Junker. Zinckernagel had been plucked from Danish side SønderjyskE for a modest fee without much fanfare but plundered 19 goals and 18 assists in 2020. Junker meanwhile netted 27 goals in the Eliteserien, despite suffering from a knee injury during the season.

However, heading into the 2021 campaign, Glimt had been raided for their most prized assets. Zinckernagel joined Watford, Junker made his way to Urawa Red Diamonds in Japan and Hauge had already departed for Milan. The trio had scored 60 of the Yellow Horde’s 103 goals in 2020 and the club had a huge task on their hands to replace them. And after a mediocre start to 2021, it appeared that Glimt’s spectacular season was nothing but an anomaly. Knutsen’s side had been knocked out of the Champions League qualifiers by Legia Warsaw and sat in sixth place in the Eliteserien after 11 games.

Glimt navigated their way through a gruelling qualifying campaign for the inaugural Europa Conference League group stage, while things also began to resume back to normal in the Eliteserien. They embarked on a sensational run, remaining unbeaten in the final 19 games of the season to retain the league title on the final day. The side conceded just 25 goals across the course of the campaign – 15 fewer than second-placed Molde. They also qualified for the Conference League knockout stages having taken four points off Jose Mourinho’s Roma.

Glimt began to gain recognition around the footballing world after trouncing Roma 6-1 in the group stages, inflicting the biggest defeat in José Mourinho’s entire managerial career. It was also the first time that a side managed by Mourinho had conceded six goals in 1006 competitive matches.

The Norwegian side once again had the unenviable task of replacing key cogs as they departed for pastures new last winter. Striker Erik Botheim left for Krasnodar, midfield stalwart Patrick Berg joined RC Lens in France and left-back Fredrik Bjorkan moved to Hertha Berlin. And as is the nature with football being played during the summer months in Norway, Bodo/Glimt were forced to prepare for their Europa Conference League play-off tie with Celtic during the season break. Knutsen’s side headed into the clash as underdogs, a tag they had so dearly cherished during their infamous title win in 2020. And cherish it they did. Glimt eased past Celtic 5-1 on aggregate – going toe-to-toe with one of Britain’s most prodigious clubs and earning widespread plaudits for their valiant displays.

After beating AZ Alkmaar in the following round, the Yellow Horde were drawn against Mourinho’s Roma in the quarter-finals. The Giallorossi struggled once more in northern Norway, with Glimt earning a 2-1 home win in the first leg. However, Knutsen’s side were comfortably beaten 4-0 in the return leg as Roma went on to win the competition. But losing to the eventual winners is nothing to be sniffed at.

Bodo’s league form has taken a hit this year as they have juggled European campaigns with domestic competition. The Yellow Horde currently sit second – 15 points off Molde in top spot.

Knutsen’s side were just three minutes from taking Dinamo Zagreb to a penalty shoot-out in the final qualifying round for this season’s Champions League group stage. Defeat in Croatia meant that they qualified for the Europa League in Group A alongside Arsenal, PSV Eindhoven and Swiss champions FC Zurich. Glimt are unbeaten in their opening two group games following a 1-1 draw with PSV before a 2-1 victory over Zurich last month. The Norwegian outfit now face back-to-back glamour ties with Premier League leaders Arsenal as they seek to advance to the knockout stages of a European competition for successive seasons. The Gunners must be wary not to write Glimt off as previous opponents have done. This is not just a flash in the pan for Knutsen and his charges. There are still pages to be written in this fairytale.