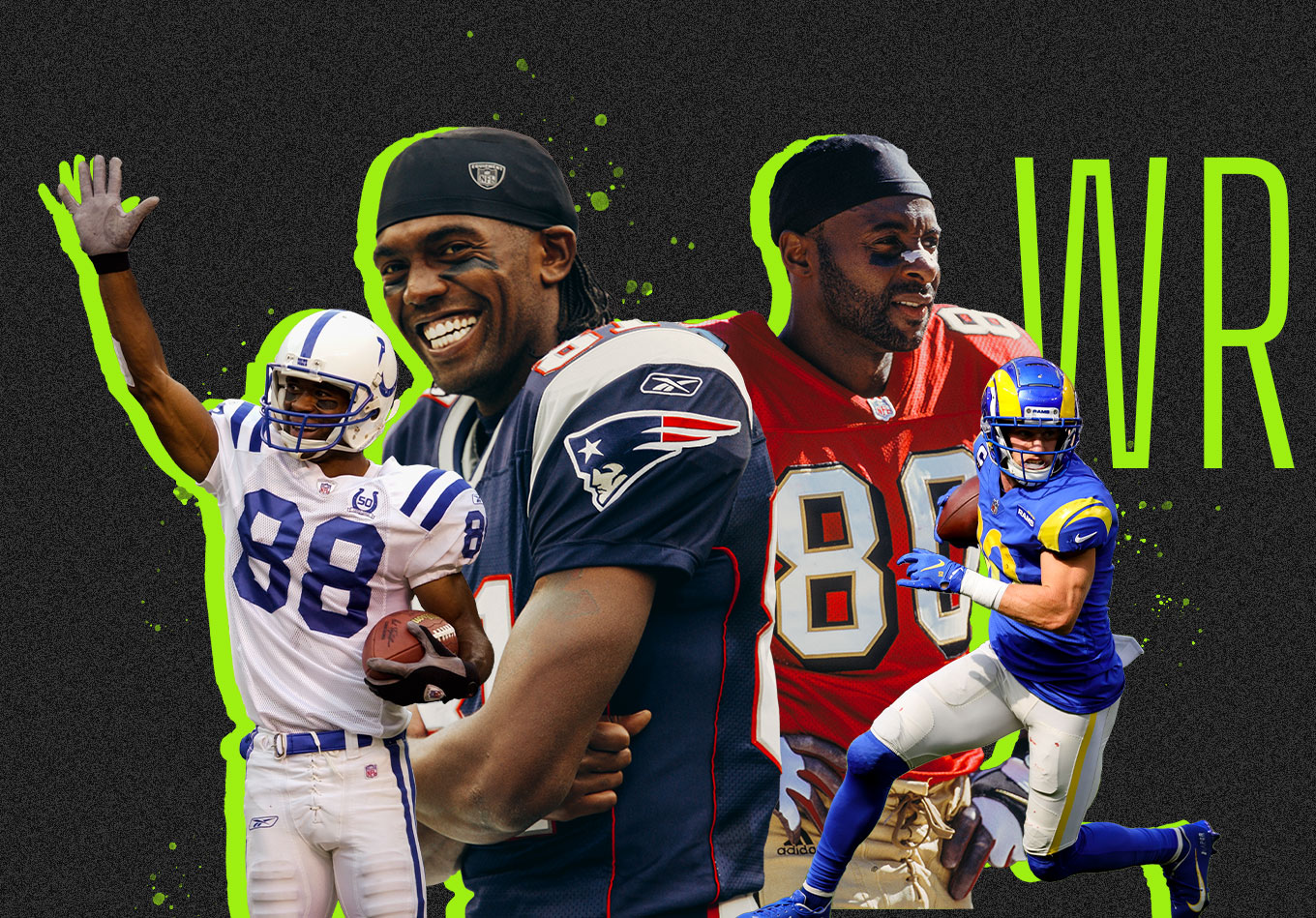 What does the best NFL fantasy football season ever look like? Better yet, what are the top 20 fantasy seasons of all time?

We’re attempting to answer those questions during a series that takes a trip down memory lane and marvels at the best in NFL history: LaDainian Tomlinson, Marshall Faulk, Lamar Jackson, Priest Holmes, Shaun Alexander, Patrick Mahomes and Christian McCaffrey.

We’ll walk you through the very best the NFL has seen at each skill position, starting with the crown jewels of any successful fantasy football season — wide receivers. Our single-game receiving records didn’t include Randy Moss, but he is in the top 20 WR fantasy seasons of all time (more than once) alongside Calvin Johnson, Cooper Kupp, Jerry Rice, Marvin Harrison, Julio Jones and some lesser-known names.

We are referring to PPR rankings when we talk about points here, but we’ve also added the standard scoring format to the table listed below. Some wide receivers have also moonlighted at running back and accumulated rushing yards and rushing touchdowns, which we have included along with receptions, receiving yards and receiving touchdowns. For simplicity’s sake, fumbles and other negative point deductions have not been taken into account here.

We have also added scrimmage yards to the table, though the only players that contributed a significant amount as a running back are Deebo Samuel (2021) and Tyreek Hill (2016). Deebo’s 59 rushes, 365 yards and eight touchdowns in 2021 sends him to 26th on the list.

We have even broken it down into categories because we know that some players accumulate points through receptions, others with high yardage and some with touchdowns. For example, Randy Moss caught 23 touchdowns from Tom Brady and totaled 161 points in 2007 with the New England Patriots. Rice had 22 touchdowns in 1987.

You probably didn’t find any of these guys on the waiver wire. And if you grabbed them on draft night, it’s likely a fantasy football draft you’ve never forgotten.

This might be Johnson’s most dominant season. He makes the top 100 three times (his 2013 season ranks 87th) in total.

Megatron was a phenomenon in his nine seasons in Motor City. In 2012, he caught 122 passes for 1,964 yards. He only caught five touchdowns and had he caught more, we might have been talking about THE all-time best fantasy football season.

Although Kupp is credited with the best fantasy season of all time in terms of total points, it’s important to note that he had the extra game in 2021. But if we look at it on a per-game basis, Johnson averaged 122.8 receiving yards per game, while Kupp averaged 114.5 per game. The 6-foot-5 receiver went over 200 yards twice during that 2012 season – against the Minnesota Vikings and Atlanta Falcons.

He finished the season with 122 receptions for 1,964 yards and five touchdowns for 384.4 fantasy points.

Rice has two seasons just outside the top 20 (21st and 29th). He makes the top 100 seven times and has three seasons inside the top 20. Rice’s 1993 season falls 19th on the list. It wasn’t his most productive season during his multiple decade-spanning career as we’ll see further down the rankings.

In 16 games that season, he was targeted 153 times and caught 98 passes for 1,503 yards and 15 touchdowns. He even added a rushing touchdown for good measure.

Harrison makes the top 20 three times and each year it was with Peyton Manning as his quarterback. They were one of the most feared quarterback-receiver duos during their time together with the Colts. While Manning was racking up passing yards, passing touchdowns and MVP awards, Harrison was largely the benefactor.

It was Manning’s sophomore season after he was selected first overall in the 1998 NFL Draft and Harrison had just over 700 yards in that first season. But their second year together was simply incredible. Through three weeks of the season, Harrison already had 28 receptions and six touchdowns. He had a season-high 196 yards against the San Diego Chargers in Week 2, racking up 38.6 fantasy points. Harrison finished the season with 1,663 receiving yards on 115 receptions and 12 touchdowns.

‘The Greatest Show on Turf’ is what the Rams offense was called during this era — and for good reason. But in 2003, that era was coming to a close. Kurt Warner, who went on to play for the New York Giants and Arizona Cardinals, had lost his starting spot to Marc Bulger and the Rams were seemingly slowing down. Holt hadn’t received the memo.

There was still plenty of juice in the old machine.

2003 turned out to be the best of his 11-year NFL career in which he totaled 920 receptions for 13,382 yards and 74 touchdowns. He had career highs in receptions, yards and touchdowns that year. The highlight of that season was his 11-catch, 200-yard game against the San Francisco 49ers.

This was the beginning of the end of an incredible eight-year partnership between Adams and Aaron Rodgers. While speculation mounted over Rodgers’ situation in Green Bay, the Packers went and traded Adams to the Las Vegas Raiders just one year later.

The wideout had seven games in which he went over 100 yards in 2020. He also caught 18 touchdowns with three coming against the Minnesota Vikings in Week 8. Adams missed Weeks 3, 4 and 5, but still put together a great enough season to make this all-time list.

He finished with 115 receptions for 1,374 yards and 18 touchdowns on 149 targets. He also helped Rodgers win the fourth NFL MVP Award of his career. He actually had more receptions and receiving yards in 2021, but he only had 11 touchdowns to finish 22nd in the top 100.

Carter played 16 seasons in the NFL. His 1995 season with Warren Moon at quarterback was his best even though the Vikings only finished with an 8-8 record. Carter had four 12-catch games and had seven more with two touchdowns. He ended up with 17 scores on his way to 361.1 fantasy points in PPR scoring.

The top three in passing yards in 1995 all came from the NFC North: Brett Favre of the Green Bay Packers, Scott Mitchell from the Detroit Lions and Moon from the Vikings. Mitchell and Herman Moore had a special season and Moore appears further down this list.

Carter ended the magical 1995 season with 122 receptions, 1371 yards and the 17 TDs. It was good enough to win fantasy managers more than a few games.

Rice’s run from 1993-95 was the best a wide receiver has ever had. In 1994, he broke the NFL record for most career touchdowns. It wasn’t his most productive season ever, but he had 112 catches and five games with 100 yards or more. He had seven catches for 169 yards and two touchdowns in the opener, breaking the record for career touchdown receptions on a 69-yard pass from Steve Young against the Los Angeles Raiders.

San Francisco lost four of its starters on the offensive line to injury in 1994 and was thrashed by the Philadelphia Eagles 40-8 at one point in the season. But the 49ers bounced back and won the Super Bowl after dispatching the Chicago Bears, Dallas Cowboys and San Diego Chargers in the playoffs. Rice would finish his career with 14 1,000-yard seasons.

It’s incredible to think that Johnson only appeared in two playoff games during his eight-year career. But in 2011, he was one of the most difficult matchups in the NFL. Johnson caught 96 passes for 1,681 yards and 16 touchdowns, finishing with 361.2 fantasy points.

Then, in the 2011 wild-card game, Megatron caught 12 passes for 211 yards and two touchdowns against the New Orleans Saints. The Lions still lost 45-28. Ugh.

Jones had three seasons in Atlanta with over 1,500 yards and this was the closest he ever got to the 2,000 mark.

If it weren’t for the injuries, we might be talking about Thomas as one of the best receivers that ever played the game. He started his career with four 1,000 yards seasons in a row.

But Thomas’ best season came In 2019 when Drew Brees found him for an NFL-record 149 receptions with 1,725 yards and nine touchdowns.

Barry Sanders was not the only star in Detroit in 1995. Moore finished with 1,686 yards and 14 touchdowns on 123 receptions with the aforementioned Scott Mitchell at quarterback that season. At the time, Moore broke Cris Carter’s single-season record for receptions in an NFL season.

Moore also had seven catches for 133 yards and a touchdown in the wild-card game, but the Lions defense couldn’t slow the Eagles in a 58-37 loss.

This was before the team’s offense was nicknamed ‘The Greatest Show on Turf’ behind Bruce, Kurt Warner, Marshall Faulk and Torry Holt.

But in 1995, it was all about Bruce. Faulk, Holt and Warner had yet to arrive in St. Louis and Bruce finished with 119 catches for 1,781 yards and 13 touchdowns. And that was with aging quarterbacks Chris Miller and Mark Rypien throwing to him.

Moss really was like nothing we had ever seen before. He used his rare combination of size, speed and athleticism to put up five multi-touchdown games against the 49ers (three), Seattle Seahawks, Falcons and Kansas City Chiefs in 2003.

Brown’s production during the 2014 and 2015 seasons was massive. In 2014, he went for 1,698 yards on 129 receptions and 13 touchdowns. It was just consistent excellence from the wide receiver while working with Ben Roethlisberger.

Brown had touchdown catches in nine of his 16 games and never had fewer than 72 yards. He also finished with eight 100-yard efforts.

Brown was more boom-or-bust in 2015. He had a couple of quiet performances, but he also had a monster 195-yard game against the 49ers, a 284-yard showing against the Oakland Raiders and 189- and 187-yard performances against the Denver Broncos and Cleveland Browns.

He finished the season with the fifth-most single-season receiving yards of all time with 1,834. He also had 136 receptions and 10 touchdowns.

This was the peak of the Manning-Harrison connection. Harrison caught 143 passes for 1,722 yards and 11 touchdowns in 2002.

Though he had seasons with more touchdowns, Harrison set career highs in receptions and receiving yards.

It’s our old friend again — fantasy football legend Randy Moss. In 2007, Moss caught 23 touchdown passes, which is a single-season record that doesn’t look like it’s going to be broken any time soon. If you just forget about his catches and yards, he would have averaged 8.6 points per game on touchdowns alone (138 points in 16 games).

But of course, we can’t forget about the receptions, of which there were 98 — almost another 100 points for your fantasy team. He also went for 1,493 yards — another 149.3 fantasy points. No wonder Tom Brady and the Patriots went 16-0 during the regular season.

He finished the season with 24.8 points per game, so unless you completely messed up the rest of your draft, Rice would have guided you to a fantasy football title even if the 49ers couldn’t repeat as Super Bowl champs. The most memorable performance that year came in Week 16 when Rice and Steve Young connected 14 times for 289 yards versus the Vikings.

We realize that Kupp had the benefit of an extra game in the first year of the NFL’s shift to a 17-game season, but consider this: Rice would have needed 31.2 PPR points to surpass Kupp if he would have been given a 17th game in 1995. Possible? Yes, but it would have taken a huge performance to get it done and Kupp’s 25.6 PPR points per game is the highest average on this list.

With the extra game in 2021, Kupp took full advantage with Matthew Stafford at quarterback. He finished with 145 receptions for 1,947 yards and 16 touchdowns. He was a menace after the catch, racking up 846 yards. That was good enough for 5.8 yards after the catch per reception — second on this list behind only Rice in 1994.