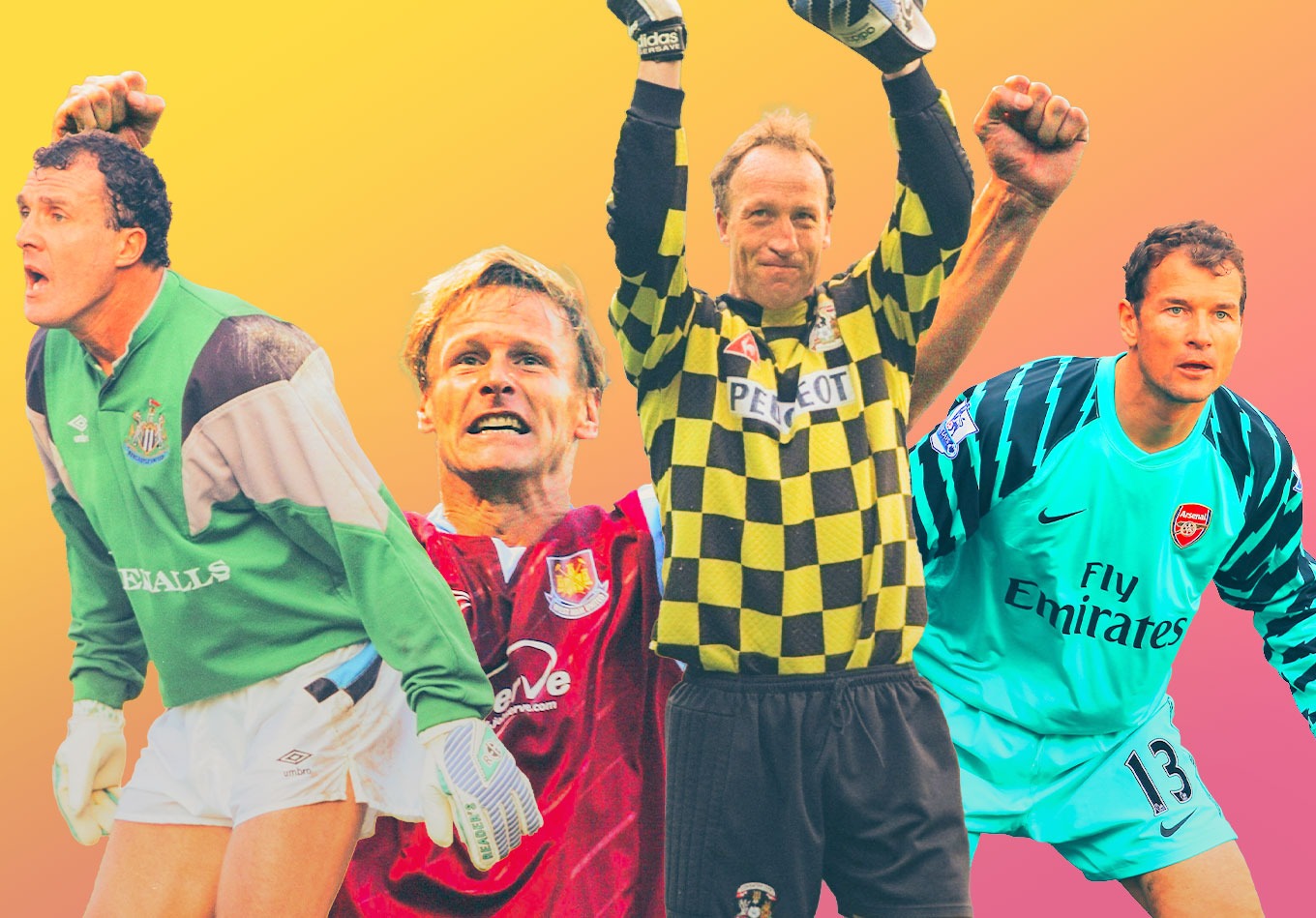 Have you ever asked yourself who the oldest Premier League players of all time are? Well, we can reveal the top 10 for you in our latest countdown.

John Burridge set a Premier League record in May 1995 – a record that still stands today. Aged 43 years and 162 days old, he played in goal for Manchester City in their 3-2 defeat to QPR at Maine Road to bring the curtain down on the 1994-95 league season, in doing so becoming the oldest Premier League player of all-time.

In the late stages of a long career, Burridge was now known as a ‘gun for hire’ and was drafted in a few months earlier to cover for City’s three goalkeepers Tony Coton, Andy Dibble and Martyn Margetson. By April, Brian Horton’s decision to recruit the veteran as cover proved to be a wise one, with injuries and suspension meaning Burridge was given an unlikely chance.

Following an injury to Tony Coton in City’s home game with Newcastle at the end of April 1995, Burridge made an appearance as a half-time substitute and kept his former club at bay in a 0-0 draw. He would start the next three games, including that defeat to QPR on May 14.

To put Burridge’s achievement into perspective, it would be like Petr Cech coming out of retirement in late October 2025 to play a Premier League game, or Frank Lampard returning to the pitch and make a Premier League appearance in late November 2021. Burridge didn’t end his playing career then. He would go on to spend time at nine other clubs lower down the pyramid, before ending his goalkeeping days as player-manager of Blyth Spartans in 1997. He’s still as strong as a bull, too.

I’m as strong as bull . Have very good . Good Friday I’m back pic.twitter.com/4tbwiBt5Mw

Alec Chamberlain played one minute of Watford’s relegation-ending Premier League campaign of 2006-07 and that was the final minute of the entire season. I’m loathe to say this was a charity appearance, but it absolutely was.

The shot-stopper was third-choice goalkeeper in the squad behind Manchester United loanee Ben Foster and Richard Lee, but Watford boss Adie Boothroyd gave Chamberlain a send-off after an 11-year career at the club with an opportunity to walk on to the Vicarage Road pitch in front of their fans one last time.

Chamberlain had previously played 27 Premier League games in Watford’s only previous season in the competition, back in 1999-00. Had he not played this single minute seven years later, then he’d have only come in at number 179 in this ranking at 35 years, 314 days old and we’d not be talking about him right now. But here we are.

Chamberlain retired from football only six days after this Newcastle game, with this one of only three Premier League games that he’d not conceded a goal in. He doesn’t need to say that he only played one minute in one of those games, to be fair.

Coventry City vs Sheffield Wednesday (6 May 2000)

The Coventry City legend played his 601st and final match for the Sky Blues in a Premier League meeting with Sheffield Wednesday in May 2000. His 601 appearances in all competitions still remains a club record and he was given a send-off in front of the Highfield Road crowd in this 4-1 victory.

The only stain on Ogrizovic’s day was that he decided to play in baggy tracksuit trousers, which even in winter months should be frowned upon by a professional footballer, but this was a warm afternoon in May. ‘Oggy’ was in goal in Coventry’s only ever FA Cup final victory in 1987 and is still fondly remembered as one of the best-ever goalkeepers to play for the club.

Brad Friedel played in 17 different Premier League seasons, which might come as a surprise to many (it did to me), with his solitary appearance in his final campaign of 2013-14 coming in November 2013 against Newcastle.

The American goalkeeper was 42 years, 176 days old when he played in this 1-0 defeat at White Hart Lane. Against no team did Friedel finish on the winning team in the Premier League more often than he did against Newcastle (10), but he couldn’t extend that record on this day thanks to striker Loic Remy’s 13th minute finish.

The remarkable goalkeeping achievement on this day came at the other end, with Magpies’ goalkeeper Tim Krul making a remarkable 14 saves. This feat has never been beaten in recorded history within the Premier League (since 2003-04). After this kind of display from Krul, Friedel probably thought it was about time that he called it a day as a professional.

Australian Mark Schwarzer has made more Premier League appearances than any other non-British player (514). There’s a nice piece of trivia for you. The vast majority of those came between spells at Middlesbrough and Fulham, before the final three seasons of his career saw him play as a backup goalkeeper at both Chelsea and Leicester City where he made only 10 appearances in three seasons.

The final one of those appearances came in March 2015, as Leicester City played out a 0-0 home draw with Hull City. After this match, the Foxes were stranded at the bottom of the Premier League with only 10 games to play – seven points and a game in hand away from safety. They lost the next match at Tottenham, before going on a ridiculous run of picking up 22 points from a possible 27 in their final eight matches to stay in the top-flight. We all know what happened the following season.

Schwarzer remained at Leicester City for the whole of the 2015-16 Premier League title-winning campaign without making a single league appearance – if he had then he could have entered the top three in this ranking. I think he’ll be pleased enough, though.

Just like Steve Ogrizovic, another English top-flight goalkeeping legend bowed out in 1999-00, with Neville Southall ending his Premier League career at 41 years old. Unlike the Coventry ‘keeper, Southall didn’t achieve it for Everton but for a club that most don’t even remember him being at.

After two seasons in the fourth and fifth tiers of English football at Doncaster Rovers and Torquay United, Southall astonishingly made a top-flight return with newly promoted Bradford City. He signed as a player-coach, with no expectation of ever playing Premier League football again, but following injuries to Aidan Davison, Matt Clarke and Gary Walsh, Southall was the only option for manager Paul Jewell for the visit of Leeds United in March 2000. Southall would be the first to admit that he wasn’t in the peak years of physical condition, but to make an appearance in the Premier League two and a half years after his last and to concede only two goals to a Leeds United team in second place this late into a season wasn’t a bad effort.

Being called into the starting XI for a single game when not having appeared for a while raises some eyebrows, especially the day after New Year’s Eve, but we’re led to believe that Jussi Jääskeläinen was “rested”.

Poole’s return to action didn’t start well, as he conceded the first shot on target that he faced in the 13th minute, when midfielder Zoltan Gera netted. However, the day was saved in the 85th minute when El-Hadji Diouf scored to equalise and put an end to Bolton’s seven-match losing streak.

Poole never played again in the Premier League but went on to play for many more years at Burton Albion, helping them reach the Football League following promotion from the fifth tier in 2008-09 before retiring at 48 at the end of 2011-12. After a goalkeeping crisis at Burton in 2013-14, Poole was re-registered and appeared on the bench following the departure of a loanee goalkeeper by the name of Jordan Pickford.

Jens Lehmann played 148 times for Arsenal in the Premier League, but his last appearance came as a surprise. He came out of retirement following injuries to Wojciech Szczęsny, Łukasz Fabiański and Vito Mannone and was thrust into the action on a sunny day in Blackpool in 2011 – this time after Manuel Almunia was injured in the warm-up.

They won 3-1, with the only blot on his performance being a 52nd-minute Gary Taylor-Fletcher strike but it didn’t ruin what was his 200th and final appearance for the Gunners. With this appearance, the German became the second-oldest player to ever play a competitive match for the club, with only Jock Rutherford being eight days older when appearing back in 1926.

It’s impossible to discuss Lehmann without a mention of his disciplinary record. He was given 12 yellow cards across his 148 Premier League games, with eight of these coming in 2006-07 – double what any other goalkeeper has ever been given in a single Premier League campaign.

Finally. We have an outfield player in our list!

Former England international Teddy Sheringham put an end to his 418-game Premier League career in December 2006, when he lined up for West Ham United in their 1-0 defeat to Manchester City at the Boleyn Ground. He failed to score in this match but did score only four days earlier in a 2-1 defeat to Portsmouth on Boxing Day, in doing so becoming the oldest scorer in Premier League history (40 years, 268 days). In fact, each of the top four goals scored by the oldest player belong to Sheringham, with Dean Windass the next oldest (39y 235d).

As a side note, Sheringham is also the fourth oldest player – and oldest Englishman – to score in a Champions League final. He was 33 years and 54 days old when netting against Bayern Munich in 1999.

Dutch goalkeeper Edwin van der Sar ended his Premier League career on the final day of the 2010-11 season, with Manchester United celebrating their title win in style with a 4-2 victory over Blackpool at Old Trafford.

Gary Taylor-Fletcher must have a thing about scoring against goalkeepers aged 40+ as just like he did versus Jens Lehmann, he scored the final goal against Van der Sar in his Premier League career.