Cover 3: The Key Matchups in the Biggest Games of the NFL’s Week 2 | The Analyst 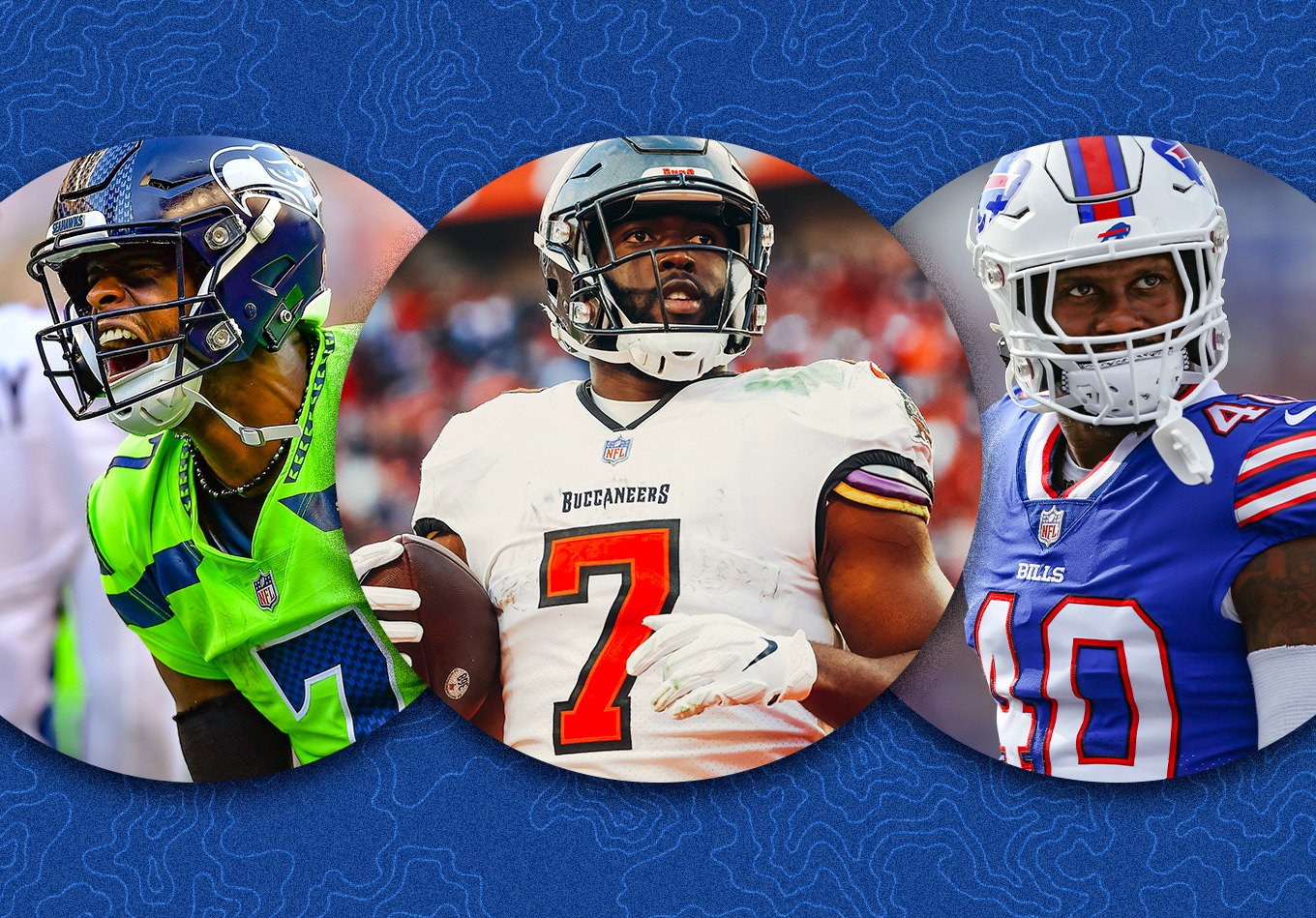 Cover 3: The Key Matchups in the Biggest Games of the NFL’s Week 2

Pat yourself on the back, cause you did it. You made it through seven, long football-deprived months.

And not only did you survive without football since last February’s Super Bowl, but you were also rewarded with one of the most thrilling opening weekends in league history.

Fans were treated to an exhilarating Sunday afternoon with game after game being decided in the final minutes – and even overtime. And when the dust settled Monday night with the Seattle Seahawks hanging on for a 17-16 win over the Denver Broncos, the book closed on Week 1 with seven games decided by three points or fewer.

Never before in the history of the NFL had there been this many games decided by three points or less in Week 1.

Can Week 2 replicate the drama? We have ideas on which games can deliver excitement based on some assistance from SmartRatings.

So after crunching the numbers, we’ll examine the three highest-rated Week 2 games on the scale and take a deeper look at their key matchups.

The Buccaneers-Saints series has been one-sided since Tom Brady entered the ring, but not in the way you might think. The Saints have won all four regular-season matchups the last two seasons, though Brady did lead the Bucs to a 30-20 victory at New Orleans in a 2020 divisional round game en route to a Super Bowl championship. Both teams enter this weekend as the NFC South’s only two 1-0 teams, meaning the winner of this one will move alone atop the division.

If preserving the health of your future Hall-of-Fame quarterback – who also happens to be older than 13 of the head coaches in the NFL – is a priority, then Tampa Bay’s gameplan under first-year Buccaneers coach Todd Bowles in last weekend’s seasons opener was good start. No team called passing plays at a higher rate than Tampa Bay’s 65.0% in Brady’s first two seasons with the Bucs. In last Sunday’s 19-3 win over the Dallas Cowboys, however, the Bucs passed on just 46.8% of their plays with only five teams passing at a lower rate (and two of those teams – the San Francisco 49ers and Chicago Bears – sloshed their way through conditions akin to playing underneath a waterfall, where passing the ball through sheets of rain wasn’t ideal).

It helped that Leonard Fournette and the Bucs’ revamped offensive line wore down Dallas’ defensive front. Fournette rushed for 127 yards – his most since joining Tampa Bay in 2020 – and was responsible for 40 of the 79 yards on the nine-play drive in the third quarter that ended with Brady’s 5-yard TD pass to Mike Evans for the game’s final margin. Of his 21 carries, 28.6% went for 10 or more yards and no player in Week 1 had more runs of at least 10 yards than Fournette’s six.

One of the big reasons Fournette enjoyed so much success was the line opened up plenty of holes for him to run through. Of the 31 running backs with at least 10 carries last week, only two averaged more yards before contact.

The Saints held Fournette in check last season – limiting him to 60 yards and an average of 3.5 yards per carry with only one run for more than 10 yards on his 17 attempts in the two games – but were susceptible against the run until it mattered most in last Sunday’s 27-26 comeback win over the Atlanta Falcons. After permitting an average of 6.2 yards per rush in the first three quarters with six of 26 running plays going for 10+ yards, New Orleans yielded an average of 3.4 yards on 12 fourth-quarter runs when Atlanta tried to run out the clock with a 16-point lead. By buckling down against the run late, however, the Saints were able to pull off the largest fourth-quarter comeback in the franchise’s 56-year history.

Just over a week ago, few probably would’ve thought that Seattle would be the only NFC West team to come out of Week 1 with an unblemished record. But after escaping with Monday’s one-point win, the rest of the division is looking up at the Seahawks. That makes this matchup huge for a 49ers team that is in danger of falling to 0-2 following last Sunday’s 19-10 loss to the Chicago Bears a year after coming within one victory of playing in the Super Bowl.

While all eyes were on Russell Wilson in his return to Seattle under the bright lights of Monday night, it was Wilson’s former understudy who walked off the field a winner with the fans chanting his name. In making his first Week 1 start since his second NFL season in 2014, expectations were tempered for Geno Smith – and the journeyman quarterback rose to the occasion. It may be a small sample size, but few QBs had a better Week 1 than Smith.

The Seahawks played to Smith’s strengths and didn’t ask him to air the ball out, instead staying safe with shorter routes. His average of 3.81 air yards per pass was the lowest in the league in Week 1 while the NFL average sat at 7.61.

Replicating that success won’t be easy against a 49ers defense that limited Justin Fields to a 47.1 completion percentage with 121 passing yards while intercepting him once – granted, that game was mostly played in a monsoon and the 49ers’ own quarterback Trey Lance struggled mightily in the deluge.

And that is where Rashaad Penny comes into play. If the Seahawks can get Penny going, Smith’s job becomes much easier. But getting the ground game on track is easier said than done against a 49ers defense that is stout against the run. San Francisco allowed an average of 1.82 rushing yards fewer than expected against the Bears – the best by any team in Week 1. The Seahawks, meanwhile, averaged 1.77 rushing yards less than expected last week – beating out only the Bears for worst in the NFL – with Penny rushing for 60 yards on 12 attempts.

Up front on San Francisco’s defensive line, Arik Armstead is one of the very best against the run, boasting a 53.5 adjusted win percentage on running plays last season. The NFL average for interior linemen was 39.2 in 2021.

There are no shortage of storylines for the early game on Monday night’s twinbill. On one side there’s a Bills team with Super Bowl aspirations playing its home opener after knocking off last year’s Super Bowl champ in the 2022 kickoff game. Josh Allen and the offense was firing on all cylinders last Thursday but has lost to the Titans in each of the last two seasons. The Titans have won the last two AFC South crowns and feature an offense led by two-time rushing champ Derrick Henry, but they’re looking to avoid opening with two straight losses after falling to the New York Giants 21-20 last Sunday when Randy Bullock’s 47-yard field-goal try missed left as time expired. There’s lots to like about this one but let’s focus on the line of scrimmage when the Titans have the ball.

The signing of Von Miller is already looking like a good one for the Bills as the NFL’s active leader in sacks ignited Buffalo’s pass rush in last Thursday’s 31-10 win over the Los Angeles Rams. The 33-year-old Miller accounted for two of the Bills’ seven sacks as Buffalo pressured Matthew Stafford all night forcing him to throw three interceptions.

Ryan Tannehill is no stranger to passing under duress – only Joe Burrow was sacked more times last season – but when he’s able to stand in the pocket and has time to read the defense without defenders breathing down his neck, he’s able to put the ball where it needs to be.

In last Sunday’s opener, Tannehill was only under pressure on three of his pass attempts as Tennessee’s revamped offensive line surrendered just one sack. Tannehill finished the game completing 60.6% of his passes for 266 yards with two touchdowns, no interceptions and a 106.4 rating.

Thanks to the improved line with Aaron Brewer at left guard and rookie Nicholas Petit-Frere at right tackle, the Titans averaged 1.47 yards more than expected on pass plays – the sixth-highest rate in the league.

Now comes the challenge of keeping Tannehill upright against Buffalo’s pass rush and a defense that yielded 2.03 passing yards less than expected – the NFL’s fourth-best rate in Week 1.

The Bills did all their damage last week without the blitz – the only team not to blitz in Week 1 – with six of their sacks coming on first and second down. Taylor Lewan will likely be tasked with lining up against Miller, and he recorded an adjusted win percentage of 81.1 on one-on-one matchups in pass protection last season. The league average for tackles in 2021 was 78.4%.