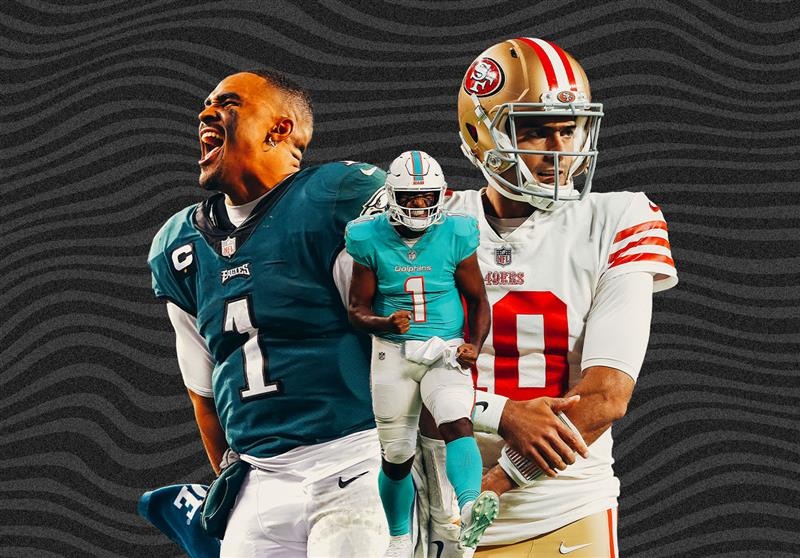 The NFL season is still very much in its infancy, but is it too early to start talking about playoff projections? Certainly not.

With the short length of the NFL season, every game, regardless of when it takes place, can have massive implications on the postseason and those teams that quickly find themselves in a deep hole (looking at you, Las Vegas Raiders) leave themselves with mountains to climb.

So, how have the first three weeks of the 2022 season impacted the postseason race? Our rest-of-season projections can answer that question.

The projected win percentages are then aggregated to produce the forecasted standings, on which one team has a clear lead over the rest of the league.

Entering the season, no team had a higher chance of winning the Super Bowl than the Los Angeles Rams (15.3%). However, as the Rams have stuttered to an unconvincing 2-1 start, the Philadelphia Eagles have soared to a 3-0 record after we projected them as a 12-win team at the start of the season.

The Super Bowl odds have, as a result, been flipped firmly in Philadelphia’s favor. The ROS projection predicts the Eagles finishing the regular season with a 14-3 record – no other team has a projection above 11.4 – and they are given an astonishing 31.4% chance of lifting the Lombardi Trophy for the second time in franchise history.

Philadelphia’s schedule plays a significant part in the Eagles’ projection, with the Eagles set to play eight more games against teams who did not make the playoffs last season. A strong week-to-week matchup situation goes a long way to establishing a favorable path to the Super Bowl.

Yet with Jalen Hurts fourth in QB efficiency versus expected, the Eagles’ status as Super Bowl favorites is also a fair reflection of a team that has one of the most complete rosters in the NFL and a quarterback quickly answering doubts over whether he is the right man for the job.

As for the rest of the NFC East, the New York Giants’ 2-1 start has improved their regular-season win projection from 4.2 to 6.7 heading into their Week 4 matchup with the Bears. The Dallas Cowboys have gone from an 11-win team down to 9.2 with the injury to Dak Prescott, and the Washington Commanders have gone from 7.9 down to 6.7.

Miami in the Mix

There were considerable doubts surrounding the Miami Dolphins heading into the season, as their preseason win projection of seven wins indicated.

The Dolphins, though, have surged to a 3-0 record behind the surprising big-play ability of a quarterback in Tua Tagovailoa who was often maligned prior to this season. Only Lamar Jackson (4) has thrown more touchdowns on passes of 21 or more air yards than Tagovailoa (3).

Miami’s projected regular-season win total has ballooned to 10.1 following the Dolphins’ hot start, with a franchise that has not made the Super Bowl since the 1984 season given a 10.2% shot of representing the AFC in Arizona in February.

Despite the Dolphins’ wild win over the Buffalo Bills in Week 3, Josh Allen’s Bills are one of three AFC teams with a higher chance of making the Super Bowl than Miami. Buffalo (16.8%) is sandwiched between the Kansas City Chiefs (27.6%) and the Cleveland Browns (11.4%).

Whether the 49ers can seriously be viewed as a better football team with Jimmy Garoppolo at quarterback after Trey Lance was lost for the season is open for significant debate after an at-best shaky Week 3 performance highlighted by him inadvertently stepping out the back of the endzone for a safety in an 11-10 loss to the Denver Broncos.

Yet the ROS projection clearly sees the 49ers as a much safer bet to make the playoffs for the third time in four seasons with the veteran under center.

San Francisco, due largely to the unknowns Lance presented at quarterback, was given just a 10.6% chance to make the playoffs heading into 2022. Even after a 1-2 start to the season, that number now stands at 60.2.

Garoppolo was 10th in QB EVE last season and, given the 49ers’ level of roster talent, the projection’s faith in him will be vindicated if he can produce that same efficiency the rest of way.

There’s been substantial doubt in him after his primetime meltdown, especially with left tackle Trent Williams now out with an ankle injury. Belief in Garoppolo and the 49ers could soon dwindle if he struggles to get back on track after Sunday’s dire display, but our model takes into account far more of his body of work with San Francisco, not one start after not getting first-team reps heading into the season.

As for their NFC West opponents, the Los Angeles Rams have gone from a 12.4-win projection at the start of the season down to 11.1, while the Arizona Cardinals have seen a serious dip from 8.3 preseason wins to 6.9 and third in the division now. The Seattle Seahawks have dipped some from 6.2 to 5.8 for the fourth-lowest projected win total ahead of the Carolina Panthers, New York Jets and Houston Texans.

The Green Bay Packers are projected to have the NFL’s second-highest regular-season win total. The Minnesota Vikings have held firm as an 11-win team from the preseason to now, firmly in second in the NFC North rankings. We still expect the Chicago Bears and Detroit Lions to battle it out for third in the division, but the Bears’ latest projection (7.1 wins up from 4.9 preseason) has that race a lot closer than three weeks ago.

We projected the Tampa Bay Buccaneers to win 10.7 games at the start of the season and win the NFC South, and we’re sticking to it no matter how angry Tom Brady is looking these days. The New Orleans Saints and Panthers have fallen off some, while the Atlanta Falcons are up to a projected 5.8 wins from 3.6.

In the AFC South, the Indianapolis Colts are still at the top, fractionally ahead of the Jacksonville Jaguars, whom we had at 7.4 wins entering the season but have since leapfrogged the Tennessee Titans. The Texans are still in the cellar at the 4.8 wins we projected them for before the season.

Entering the season, we had the AFC West at a combined 40.2 wins with Patrick Mahomes and the Kansas City Chiefs leading the way at 11.5. That’s dipped to 11.2, but they’re not alone. We’re projecting the Broncos to finish second now rather than third, but that comes with a dip from 9.8 wins to 9.4. The more drastic stuff comes from the Los Angeles Chargers (9.8 wins to 8.2) and 0-3 Raiders (9.2 wins down to 7.8).

And we’ll end in the North, where it’s rather tight and orderly with what we published in the preseason.

The finishing positions you see here is what you saw then with the Baltimore Ravens at the top of the division, though their projected wins have dipped slightly from 10.4 to 9.6.

Yes, we had the Cincinnati Bengals finishing third in the division with the same 8.2 wins we’ve still got them at. The Pittsburgh Steelers have hardly moved after entering the season at 7.0 wins.