'So You're Tellin' Me There's a Chance': Every Team's Probability of Playing in the Super Bowl | The Analyst 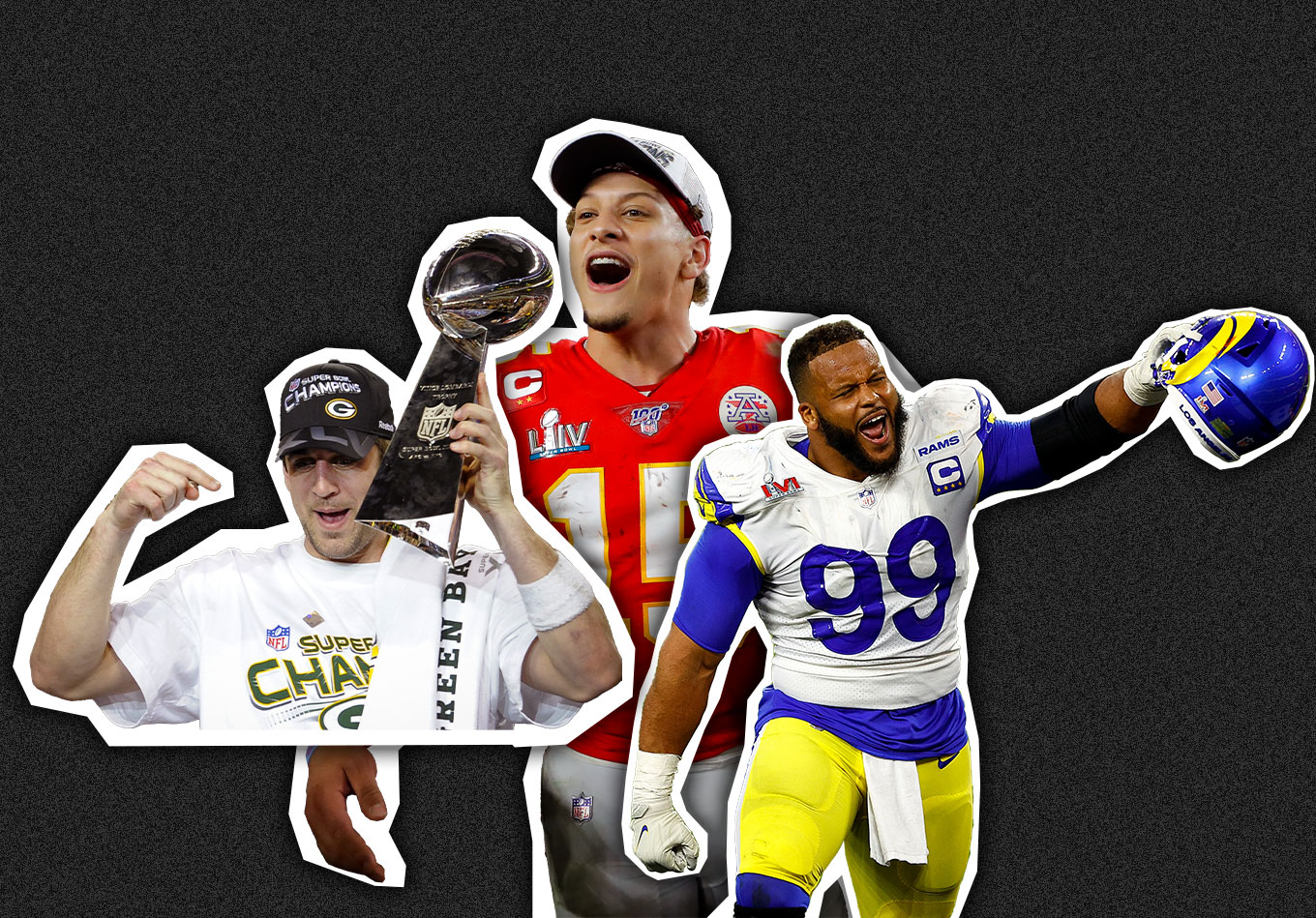 ‘So You’re Tellin’ Me There’s a Chance’: Every Team’s Probability of Playing in the Super Bowl

The idea of “any given Sunday” is what makes the NFL so compelling.

Any one team can beat another, and that means at this stage of the season, with the first snap still to be taken, every team can have Super Bowl aspirations.

The Cincinnati Bengals, for example, may have been slightly surprising contenders in 2021, but there remain some teams whose title hopes are so remote as to be nonexistent.

For some, this is because they have missed their shot at glory in recent years. For others, the plan is to challenge in seasons to come.

So this leads us to draw up a preseason tier system, ranking all 32 teams by their Super Bowl windows with the help of our AI prediction model.

Every future game is projected to give a predicted win percentage for each team across its remaining games. The projections are calculated by looking at each team’s quarterback and performance in terms of EVE (yards added in expected passing situations) as well as team values for pass protection/pass rush, skill position players/coverage defenders and run blocking/run defense.

The projected win percentages are then aggregated to produce the season forecast. Let’s take a look at the model’s chances for the teams in each tier.

This is unlikely to be a season to remember for the teams grouped in this category, for a variety of reasons.

The Houston Texans won the AFC South in 2018 and 2019, but the Deshaun Watson saga and two down years have them looking at a rebuild. Their expected win total is just 4.8 on the season, which ranks them ahead of the Atlanta Falcons (3.6) and the New York Giants (4.2).

The Chicago Bears are the fourth and final team projected to earn fewer than six wins (4.9), with second-year quarterback Justin Fields receiving little help on offense and playing behind an offensive line ranked 31st in our positional rankings.

Meanwhile, the Washington Commanders rank 31st in terms of skill players – better only than the Falcons. In Baker Mayfield and Sam Darnold, the Carolina Panthers have two high draft pick QBs unlikely to lead them to the postseason. The New York Jets are in a similar boat, with Joe Flacco starting until giving way to the injured Zach Wilson.

The Detroit Lions might argue they do not deserve to keep such company after a 3-3 finish to last season, but nobody could seriously argue they are title contenders.

According to our projections, the Texans, Falcons, Giants, Bears, Panthers, Jets, Lions and Commanders all have less than a 1.0% chance of playing in Super Bowl LVII. Perhaps surprisingly, the same goes for the Miami Dolphins and San Francisco 49ers (more on them later).

If that first group was a mixed bag, so too is the second.

Anyone who has paid any attention to the New England Patriots‘ preseason would suggest they are very fortunate to be given any hope of success in the near future, but they finished with 10 wins in 2021 – even if that number is projected to shrink to 7.8.

That still ranks the Patriots comfortably ahead of the aforementioned Dolphins (7.0), although the losing team in their Week 1 meeting could face a long slog of a season.

At the other end of the spectrum, the Philadelphia Eagles are forecast to have 11.9 wins – the second most in the NFL – after a very strong offseason. But Jalen Hurts, for now, is unproven in the postseason, so Philly fans may have to stay patient.

The 49ers are even younger at QB after promoting Trey Lance to a starting role, which explains why the prediction model looks so unfavorably on a team many consider contenders right now. Just 7.1 projected wins speaks to the potentially low floor Lance brings.

The Arizona Cardinals have to be considered among this group of future hopefuls, with Kyler Murray hugely talented and now committed long term but frustratingly inconsistent. The Jacksonville Jaguars hope Trevor Lawrence can follow in the footsteps of the Cincinnati Bengals’ Joe Burrow – the No. 1 pick the year before him.

The Los Angeles Chargers, with 9.8 projected wins, have Justin Herbert to lead their charge, while the Cleveland Browns might have been contenders already if not for Watson’s suspension, which is enough to limit them to a still strong 9.3-win forecast.

The Chargers may have Herbert, but they also have three division rivals who intend to win and win now. Indeed, all four AFC West teams rank in the top half of the league in terms of projected wins, with the Chargers second – behind the Kansas City Chiefs (11.5) and just ahead of the Denver Broncos (9.7) and the Las Vegas Raiders (9.2).

The Chiefs lead the AFC in this regard, although their playoff win over the Buffalo Bills last season came down to a coin flip, and the two are set to be similarly tough to separate this year. Buffalo is projected to have 11.1 wins, while the Chiefs have the highest probability of reaching the Super Bowl at 26.0%.

The two teams coming off a Super Bowl run are of course prominent among the contenders, even if the model has far greater optimism for a Los Angeles Rams repeat than for another Bengals charge.

The Rams are backed for a league-leading 12.4 wins, given a 24.0% shot of coming out of the NFC and a NFL-best 15.3% chance of repeating as champions. The Bengals, however, are actually projected to dip below .500 with 8.2 wins and only have a 1.3% probability of getting back to the Super Bowl.

The Bengals’ route to the Super Bowl will be complicated not just by the AFC West and the Bills, but also by any return to form for Lamar Jackson’s Baltimore Ravens, who are counted among nine teams on course for 10 or more wins (10.4).

Also in that group are NFC pair the Dallas Cowboys (11.0) and Minnesota Vikings (10.9), who may not even be the best teams in their divisions but might be nearing a point when they must seriously challenge or start again, which brings us to…

As long as Tom Brady and Aaron Rodgers are the QBs for the Tampa Bay Buccaneers and the Green Bay Packers, those teams have a chance. The question is how long that will remain the case.

Brady is 45, briefly retired this offseason and then missed a chunk of the preseason. Rodgers is 38, has repeatedly been linked with a move away from Green Bay and lost top target Davante Adams ahead of the new season. Still, the Buccaneers rank eighth for projected wins (10.7), with the Packers up in third (11.5).

They are not the only aging teams in the NFL, however.

The Indianapolis Colts hope they have upgraded in moving from Carson Wentz to Matt Ryan, yet the former MVP is now 37 and last played in the postseason in 2017 – when Wentz’s Eagles took the title.

Tennessee Titans QB Ryan Tannehill is a little younger at 34, but of greater concern would be Derrick Henry’s durability after the injury that limited to eight games last regular season. The Titans need to make the most of any seasons they have left of the superstar running back going at full tilt.

Russell Wilson, Ben Roethlisberger and Drew Brees won Super Bowls with the Seattle Seahawks, Pittsburgh Steelers and New Orleans Saints, respectively. But with all three having now moved on, it is difficult to see those teams plotting a path to the title.

For the Seahawks and the Steelers, this will be their first year without their stalwart QBs, even if things had already gone stale in 2021. Wilson dipped below the .500 mark in a season for the first time in his career, while Pittsburgh was attempting to stay competitive in spite of Roethlisberger rather than because of him.

Still, with both gone – Wilson to Denver and Roethlisberger to retirement – there is a void under center that has not been suitably filled. Seattle also ranks 32nd in our pass protection rankings, likely leaving Geno Smith hopelessly exposed.

The Saints have had another 12 months to come to terms with Brees’ exit after spending last season switching between Jameis Winston, Trevor Siemian and Taysom Hill at QB. Winston’s season-ending injury doomed the Saints’ hopes of contention last year, and New Orleans’ outlook for 9.5 wins with the entertaining but erratic former top pick is at least far more positive than that of the Seahawks (6.2) or the Steelers (7.0).

The Seahawks and Steelers both have less than a 1.0% chance of playing in Glendale in February, while the Saints have a 4.0% probability of getting there.