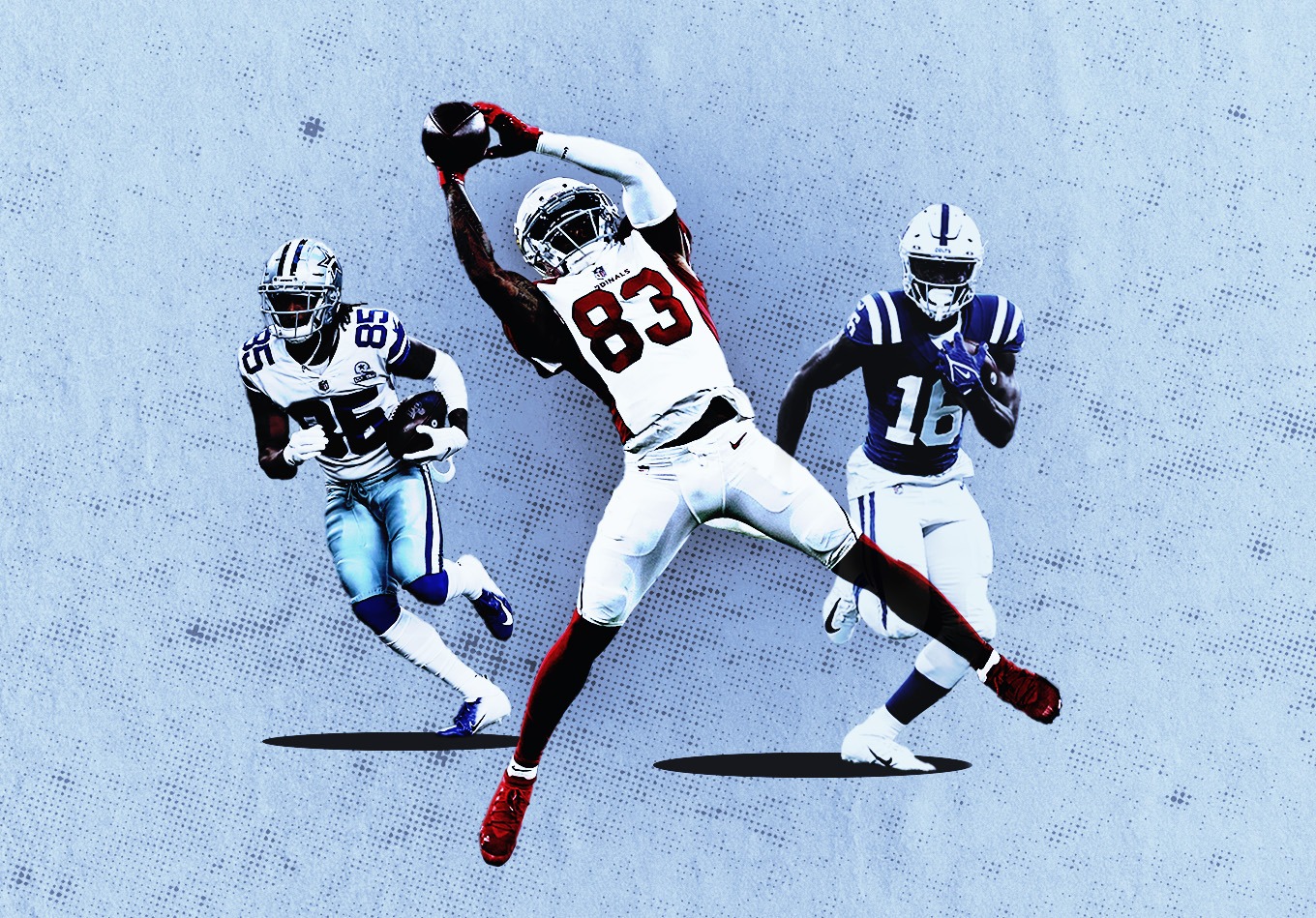 The dust is starting to settle.

We have two weeks worth of evidence to help guide us going forward in our quest for fantasy football glory. The volatility of the opening week has been replaced by efficient and professional calm, for the most part. We can tear up our preseason notes and narratives. A lot of what we thought we knew for sure in the preseason just isn’t so.

Hyping a player in the offseason is easy. Turning that hype into production is the hardest part and we get to see pretty early who the coach trusts and what the plan is. It’s not always that easy to make complete sense of things after just two weeks with weather conditions (see the Chicago Bears-San Francisco 49ers in Week 1) and injuries (see also San Francisco’s injury report) obfuscating matters.

The fliers you took in the late rounds of your fantasy draft that you’re ready to drop need to be replaced. But with who? Keep reading.

As always, refer back to our fantasy football rankings for updates throughout the week. Our initial weekly PPR rankings for Week 3 are included here.

The Tampa Bay Buccaneers wide receiving corps is stacked. Mike Evans and Chris Godwin are as good a one-two punch as there is in the NFL. They also signed Julio Jones and have Gage, too. The only problem is that they haven’t been on the field together enough.

Mike Evans has been suspended. And Gage has to be the top option for Tom Brady if Julio Jones and Chris Godwin are also out. Even if they can, their health status is one of concern and something we are monitoring closely from a fantasy perspective.

The Romeo Doubs hype train had plenty of passengers in the offseason. But the production hasn’t been there yet even though Matt LaFleur sang his praises after playing against the Bears and what he called their ‘salty defense.’ “The guy is electric with the ball in his hands. He’s dynamic,” LaFleur said.

The Packers WR corps will take some time to turn into one we can hang our hat on. Allen Lazard, who Aaron Rodgers called the No. 1 option, had two catches in his return last week. But for now, it looks like Sammy Watkins might be the guy Rodgers leans on.

The New England Patriots offense has no structure at the moment, but Meyers saw an eye-catching 13 targets in Week 2. He is emerging as Mac Jones’ favorite target. His 19 targets across two games is a 30% target share to Nelson Agholor’s 11 targets and 17% target share.

Kendrick Bourne has big-play potential, but let’s see how this shakes out in the coming weeks as Meyers stakes a claim as the one player we can trust in this offense.

Williams is only rostered in 43.8% of leagues. He’s currently playing in 34% of Detroit’s offensive snaps and carried the ball 12 times against Washington on Sunday while D’Andre Swift battled an ankle injury.

Swift made himself relevant with five targets and a receiving touchdown, but if the injury lingers, we’re going to need to reevaluate Williams’ fantasy potential.

Dortch is rostered in just 2.8% of leagues on ESPN. Until Week 7 when DeAndre Hopkins’ suspension ends, Dortch might provide top WR2 production. He finished Sunday’s game with four targets and four catches for 55 yards and a touchdown. That comes after an impressive nine targets in the first week of the season. He’s currently third behind Marquise Brown and Zach Ertz with 6.5 targets per game for the Cardinals. He has a higher target to reception ratio than either of those two players.

Rondall Moore is still injured and could miss ‘a few more weeks’ and Hopkins isn’t back until Week 7. When Christian Kirk left, he left a massive hole in the Cardinals’ roster. He was targeted 103 times last season. Dortch only had three receptions before the start of this season. If he can gain the confidence of Kyler Murray, he might be a good stash option to have.

The Dallas Cowboys lost Dak Prescott to injury in Week 1, but Brown produced in that game and he continued to do so in the second game when he hauled in his five targets for 91 yards and a touchdown with Cooper Rush under center. He’s the Cowboys leading wide receiver and has one more target than CeeDee Lamb and Dalton Schultz, whose status is uncertain for this week. Brown’s trajectory is only going in one direction in the next couple of months.

The Cowboys running game is in the middle of a crisis with Ezekiel Elliot and Tony Pollard combining for 156 yards over two games now and Rush needs someone he can trust to catch the ball. Brown isn’t going to be a long-term fix for your WR position, but while Dak is out and Michael Gallup continues to come back from an ACL tear, Brown might be the perfect solution.

The third-year pro has done everything he can to convince Mike McCarthy that he’s worth consideration even after everyone comes back. Brown has run 70 routes through two weeks, ranking 13th in yards and 31st in targets in the NFL. Lamb isn’t likely to give up many targets (22), but Brown is second (14) and Schultz (13) is third. Brown is only owned in 0.8% of leagues on ESPN. He’s likely to continue to be a threat in the next few weeks and could be a valuable stash even when everyone is healthy.

Here’s one more nugget that will convince you if you haven’t already been convinced. The Cowboys have thrown the ball once inside the 20 – a completion to Brown that resulted in a touchdown. If they get more action in the red zone and Brown turns out to be their top target down there, this pickup could have high WR2 upside.

The Indianapolis Colts have a receiving problem. Their offense, in general, is stuttering but the receivers aren’t doing much to help. We’re still waiting for Parris Campbell to show us WR2 potential. The Colts have elevated Keke Coutee to their active roster as they search for someone, anyone who can offer them steady hands. And while the Colts figure all this out, Dulin continues to look like a steady long-term option. Michael Pittman Jr. is their No. 1, but missed the game on Sunday. That’s where Dulin came to the fore.

Matt Ryan has thrown the ball 36 times per game on average over his career. Through two games with the Colts, he’s throwing it 40 times per game. And while their offense looks like a mess right now, Dulin might emerge as stash option for a quarterback who isn’t aging well.

He’s tied for first in targets (13) with Pittman, third behind Pittman and Nyheim Hines in receptions and is second behind Mike Strachan for yards per route (15.6).

In the first game, he was tied for fifth on the team with six targets alongside Hines, but had a team-high seven in the absence of Pittman. He’s basically cemented himself as the No. 3 option in an offense that hasn’t been very fantasy friendly so far. The aforementioned Campbell was listed as the top receiver, but had zero catches and zero yards. An ominous sign for Campbell, who is in his fourth year now and has never caught more than 18 passes in a season, which he did during his rookie year in 2019.

Meanwhile, Dulin is only owned in 2.4% of fantasy leagues on ESPN. If you’re further down the waiver wire and want to make a move, Dulin is worth a look.

This one is little complicated. If James Connor’s ankle injury isn’t serious, which early reports suggest is the case, then you go with Benjamin. If he’s going to miss time, then Williams is the running back to pick up.

The case for Williams: Williams finished with eight touchdowns on limited snaps for a very fantasy friendly offensive in Kansas City last season. He started just seven games and carried the ball 8.5 times a game on average. He has carried the ball eight times this season and all of those carries came when Conner was out of the game against the Las Vegas Raiders.

Williams looks like he could be the short yardage back, too. He was the one who got the goal line carry that he turned into a touchdown. And 50% off his eight carries came with three yards or less to go for a first down.

Having said that, Benjamin got more work in the red zone, it was just Williams who punched his carry in for the touchdown – production matters. This is keeping with the general theme of Arizona’s backfield in Connor’s absence. Williams ran for 7.4 yards per carry compared to Benjamin’s 3.9.

The case for Benjamin: It looks like Conner won’t miss much time as Ian Rapaport of NFL Network reported that it isn’t a serious injury. Benjamin only carried the ball four times against the Kansas City Chiefs, but that game was a blowout early on. He got eight carries against the Raiders and has seen eight targets across those two games.

Benjamin is averaging four targets per game. So, when Conner is healthy, it’s Benjamin who will likely fill in as the pass-catching back. Conner has missed at least three games in every season (six in 2019), except for last year and his rookie year when he missed two.

You’re going to have to bear with Pickens for a bit until Pittsburgh can get its offense going. Pittsburgh’s QB situation is a precarious one. And their WRs are struggling because of it. Diontae Johnson is the No. 1, but hasn’t looked himself after coming into the season with a banged-up shoulder. His 22 targets lead the team, though his 8.6 yards per reception rank fourth.

Mitch Trubisky’s well-thrown percentage is just 73.9% – the eighth lowest in the league among those with at least 20 attempts. That puts a ceiling on any wide receiver in this group even though they’re throwing the ball 35 times per game so far.

Mike Tomlin was forced to say he would ‘exercise appropriate patience’ with his offense after just two weeks. The unit has looked decidedly poor in the first two showings of the season. “I think that if anyone is sitting here on Monday in Week 2 of this thing feeling happy, they’re probably wrong or misinformed,” he said after the 17-14 loss to the Patriots.

As for Pickens, he has six targets in two games. That’s fifth on the roster behind Johnson, Pat Freiermuth, Chase Claypool and Najee Harris. But Pickens leads the team with 11.5 yards before the catch and average depth of target for players with two or more targets. He has big-play potential.

Pickens is having to adjust to the NFL while rehabbing fully from an ACL injury that happened in the spring of 2021. It might be a slow burner of a season as he regains confidence in that knee, but if Tomlin and the Steelers want to get this offense going, Pickens might be the key.