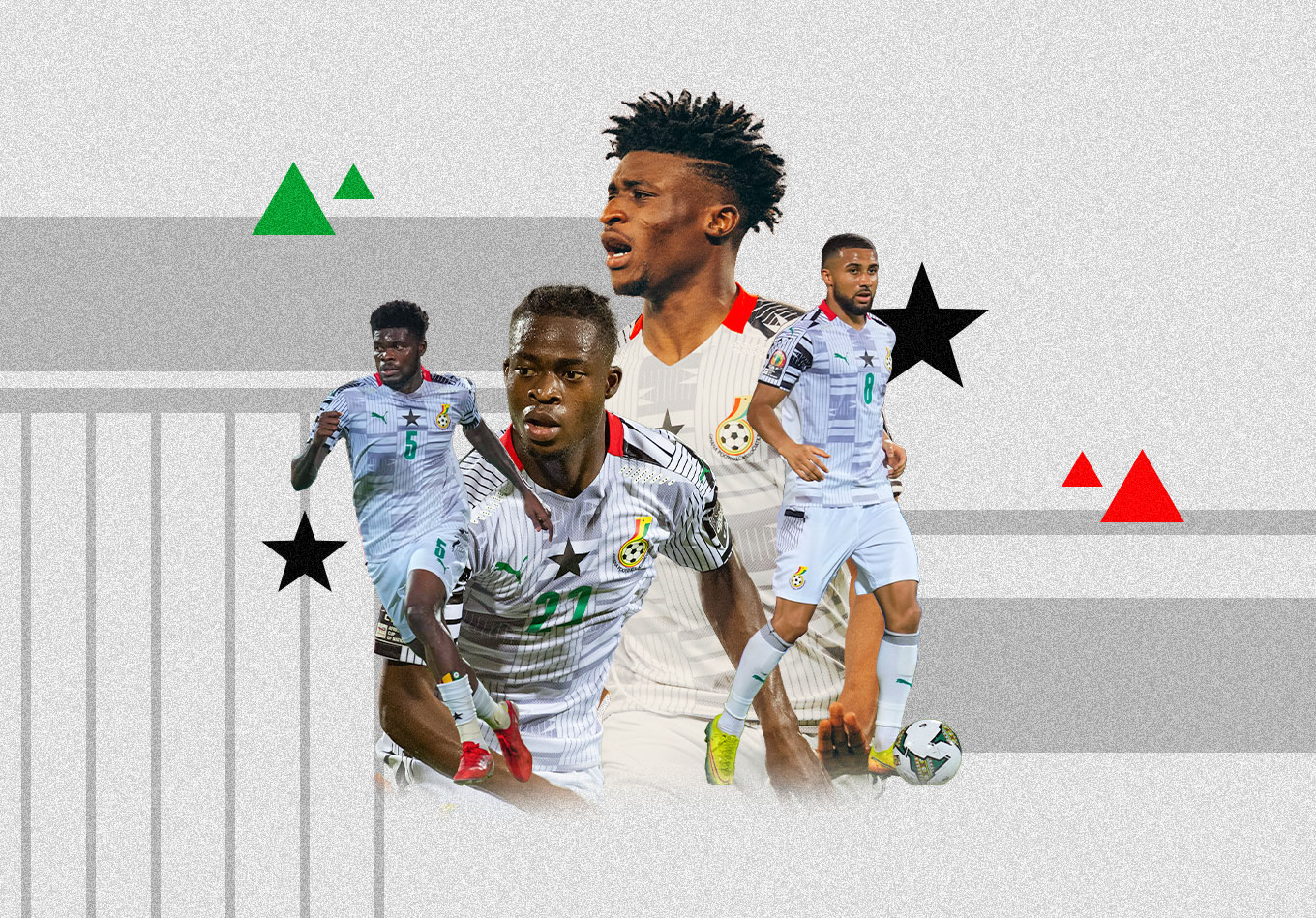 Ghana have played Brazil four times at senior level and the result has rarely been close. When they meet in France on Friday, a new-look Black Stars team will probably aim for a morale-boosting draw, while O Seleção – favourites to win a sixth World Cup trophy – will want to send a message to potential title rivals.

He walked into the Ghana team camp not knowing what to expect, but the last few days have been breathless for Iñaki Williams – and that’s saying something for a player known for his endurance.

One would imagine that Williams’ outstanding and ongoing record of playing 239 consecutive league games for Athletic Bilbao would have made him a hard man to crack, but the welcome the 28-year-old has received from the Ghana camp after switching nationality has “blown his mind,” according to a member of the team.

And who are we to doubt that, after videos of the player’s initiation dance – with twerking and all – went viral on Wednesday night?

The Black Stars’ custom of making every newly called up player show their dance moves dates back several years and is a great way to bond. After Williams – capped once by Spain – had his turn, former England youth star Tariq Lamptey took to the floor. As did former German U21 players Ransford-Yeboah Königsdörffer and Stephan Ambrosius.

When the quartet entered the dining area, there was a conspicuous pull-up banner with their photos and a message: WELCOME HOME.

Everything about the reception for these players signals a deliberate effort by the Ghana FA to usher in a new era for a Ghana national team desperately searching for an identity. So far, the signs are encouraging.

Twelve months is a long time in football.

In September 2021, Ghana sacked coach Charles Akonnor, re-appointed Milovan Rajevac the same month (the man who took them to a World Cup quarter-final in 2010) and then sacked him four months later after a disastrous Africa Cup of Nations (AFCON) campaign. Then, in February, Otto Addo was appointed.

With limited time, Otto – working simultaneously as an assistant coach at Borussia Dortmund – assembled, arguably, the weakest Ghana team has seen in years. Somehow, they beat a strong Nigeria side on away goals to qualify for the World Cup. Otto did it by being more attentive to detail and maximizing his team’s strengths, but it wasn’t pretty. Across the two legs, and 180 minutes of football, both sides combined managed just seven shots on target.

It was obvious that immediate backup was needed – which is how the global scouring for diasporan talent took root.

“The availability of these players means a lot to the Ghana Football Association and the technical team of the Black Stars,” FA president Kurt Okraku said in July. “We have always maintained that we will not limit ourselves to only a small group of players but would scout top talents across the globe who are ready to sacrifice for the nation and to take us to the next level.”

Ghana have ruthlessly exploited a recent FIFA rule allowing players greater scope to switch national teams; now being able to do so as long as they have played no more than three competitive matches at senior level prior to turning 21.

But building a cohesive unit will not be easy, as was evident in the last international break when the team recorded a mixed bag of results: they beat Madagascar 3-0, drew against Central African Republic 1-1, lost 4-1 to Japan and beat Chile on penalties after a 0-0 full-time score.

Which is why Friday’s friendly against Brazil could not have come at a better time. The buzz of playing the five-time world champions, who have named a star-studded 26-man squad, seems to have galvanized the Black Stars.

What needs to be sorted are the good headaches the influx of new talent will give the coaching crew.

Where Will the Goals Come From?

At the ill-fated AFCON in January, Jordan Ayew, Richmond Boakye-Yiadom and Benjamin Tetteh were Ghana’s main striking options. The trio combined for one goal in the tournament.

The most likely source of goals is Mohammed Kudus, who is not a striker but has scored seven goals and an assist in 10 games for Ajax from that position this season. It is unlikely Otto will use the midfielder upfront, instead preferring to try Williams or Jordan Ayew.

Jordan Ayew was supposed to be the heir to Asamoah Gyan, but his scoring boots simply haven’t fit for club and country in recent years. And yet, as barren as his form has been, the younger Ayew brother remains the joint-second Black Stars top scorer (with four goals) since Gyan last played in July 2019.

And that’s why the emergence of Williams is so exciting because he could be an added source of goals.

The surface-level numbers for Williams aren’t exactly wonderful. He’s only ever hit double figures for goals in one La Liga season (2018-19).

But last year, despite scoring just eight goals in the league, he registered a total of 15.0 expected goals. An underperformance of over seven goals was more than anyone else in La Liga.

While Williams’ goal tally isn’t impressive, if he continues to get into good shooting opportunities and – crucially – starts to convert them, the goals should come, at least at a faster rate than Ayew’s.

Plus, there is a history of Spanish-based strikers maturing belatedly. He could become Ghana’s own Aritz Aduriz, albeit with different traits.

Belgium-based Odoi could not have chosen a tougher game to make his debut. It came in the World Cup playoffs against Nigeria in March, and he completely sold himself to the fans. Those performances basically made the right-back spot his own, until the recent nationality switch of Lamptey was completed. Suddenly, the Black Stars do not have one, but two world class players in the position.

Lamptey’s blistering form of a few years ago has slowed down marginally as a result of a series of injury issues, but Brighton have been managing his game time this season and he’s getting back to full fitness.

That said, on form, and considering recent chemistry with the team, Odoi should start against Brazil. However, it’s been widely speculated that the technical team are considering Lamptey as an option on the right wing, a role he’s not alien to. Both players are powerful ball carriers, and show no hesitation getting up the right flank.

Odoi has made 26 carries per 90 minutes for Club Brugge this season. Only Loïc Lapoussin and Daniel Muñoz are currently averaging more per game. Whoever starts against Brazil, expect them to look to make surging runs forward.

For years, midfield has been where Ghana is strongest. These days, the defence could quietly be a rival to that sentiment. Odoi and Lamptey are just recent additions to staples such as Leicester’s Daniel Amartey, Celta Vigo’s Joseph Aidoo, Strasbourg’s Alexander Djiku, and Gideon Mensah, who recently moved to Auxerre.

A back four has usually looked like Odoi – Amartey – Djiku – Mensah, but the introduction of Southampton’s Mohammed Salisu makes things interesting. Having declined several call-ups to play for Ghana to focus on building himself at club level, the 23-year old has arrived just in time to provide even more depth. Being a centre-back means he’ll fight for a place with Djiku, as Amartey’s leadership qualities makes him a certain starter. Based on the numbers and the playing style of each of their domestic teams, Djiku might offer more in possession, with Salisu providing extra defensive steel.

Ghana have had two training sessions, but the team is in such a transition that there is no real indication of what their starting XI might be.

However, a safe bet would be: