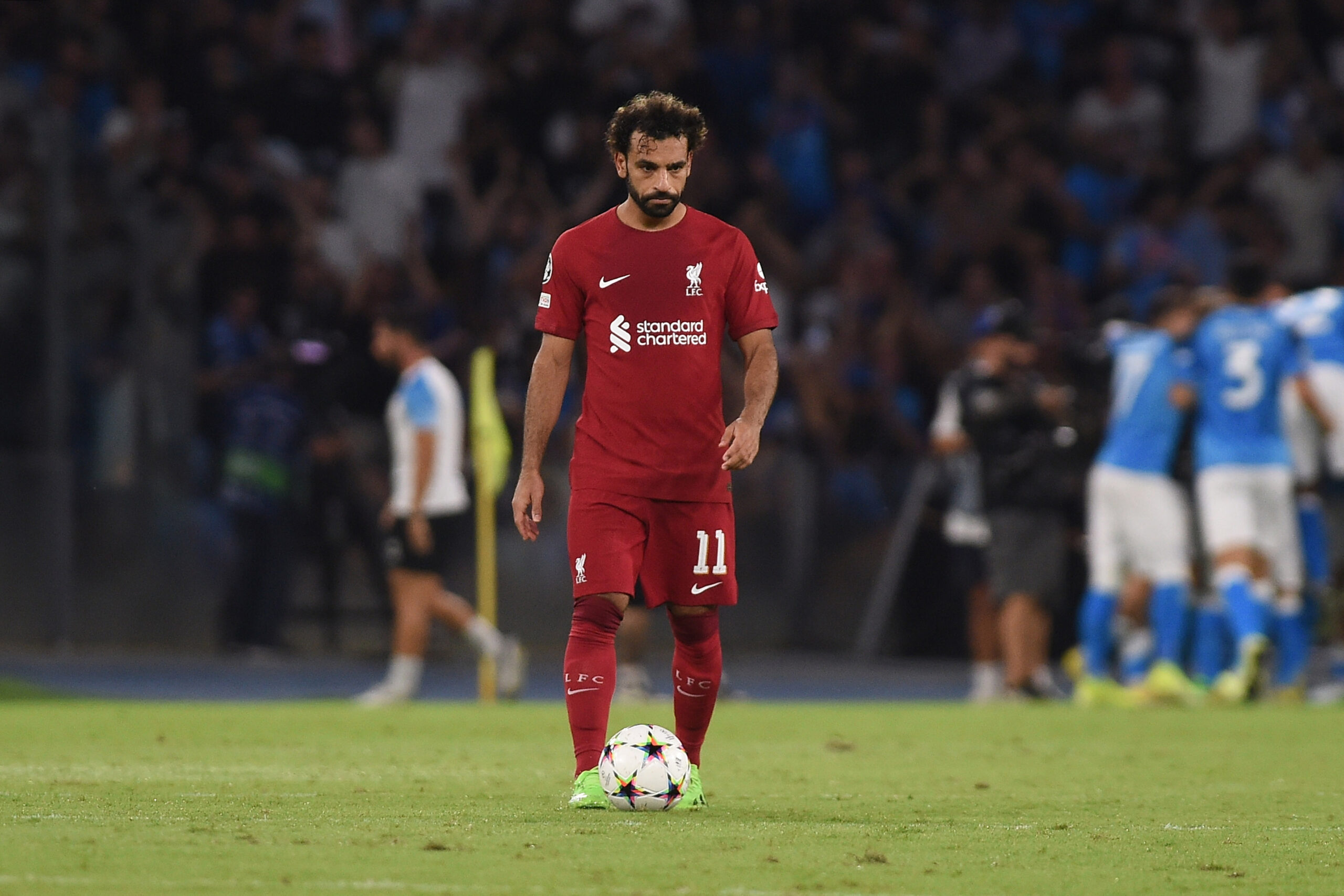 By his standards, Mohamed Salah is in a bit of a rut.

Prior to this campaign, the prolific Liverpool forward always had a minimum of five goal involvements in his first six Premier League outings within a season.

This time around, however, the Liverpool no.11 has just two goals and a further two assists to his name. Couple that with the fact that the Reds have made their worst start to a season under Jurgen Klopp and it is easy to understand why there are many inquests taking place to find out what is going on at Anfield.

Salah is at the centre of a lot of them.

The 30-year-old signed a new long-term deal with the club in the summer to bring an end to speculation surrounding his future with the Merseysiders. The contract saw him become the best-paid player in the club’s history and was a sign, along with the renewal of Klopp, that the Reds wanted to extend this period of success.

For Liverpool fans this summer the buzzword was evolution and it wasn’t strictly down to Darwin Nunez’s name. The arrival of the 23-year-old was a clear indication that there would be a change of playing style. Darwin was the first real centre-forward signed by Klopp since he joined the club in 2015. The idea was for the Uruguayan striker to eventually succeed a player once known as the system at Anfield, Roberto Firmino.

The Reds would have to adapt, and they would have to do it without Sadio Mane. The former Southampton winger was one of the most consistent players in terms of output during the Klopp era, hitting double figures in six successive seasons while playing a variety of roles.  The Senegalese speedster also netted 20 or more in four of those campaigns.

With Mane gone and Firmino seemingly being slowly phased out – time sharing the centre-forward position with Diogo Jota and Darwin, never before had there been so much pressure on Salah to deliver.

That is why the three-time Golden Boot winner is being analysed in a way that would suggest he is on a barren run as opposed to someone with two goals and two assists in 540 Premier League minutes.

A theory being pushed by many is that Salah is too wide this season. Klopp was asked about this following the 0-0 draw with Everton and his response was one of bemusement.

He said: “No, it’s not more than other seasons or whatever. I’m not sure what you see there.”

Salah has been occupying wide areas since the very start of the 2019-20 campaign. Liverpool tried something a little different tactically in those early games with both wide forwards hugging the touchline. The space on either side of the centre-forward would then be filled by a midfielder depending on which side of the pitch the Reds had the ball. You can see it in the below example, taken from the 2019 UEFA Super Cup final.

We can see Salah circled to the bottom right of the screen grab. With Liverpool building out from the left side of the defence, James Milner pushes on to make it a front four with Fabinho shuffling over to that side of the pitch to cover. Jordan Henderson then drops to cover for the Brazilian being on the left.

What is interesting in this sequence is how Liverpool leave a large area of the right side vacant. As a result, there is no inside pass on for Joe Gomez meaning he can either go back to Jordan Henderson or play it down the line to Salah. The Chelsea left-back looks to cover the pass to the Egyptian so moves outwards to get a little closer. Notice how the former Chelsea man doesn’t look to spin behind in this instance. He just holds his position and lures Emerson Palmieri over.

Gomez then passes back to Henderson who plays a cross-field ball to Virgil van Dijk.

With play being back on Liverpool’s left, Chelsea drop back into shape and shuffle to their right.

Van Dijk then sprays a ball forward into Salah who had remained fairly wide, creating separation between himself and Palmieri.

The initial phase of play was to disrupt the Chelsea shape. As they looked to get back into it, Mane took up an interesting position on the Liverpool right that had previously been vacant in the build-up. He was ahead of Antonio Rudiger but in a space that meant Palmieri might have to cover if the ball is played into feet.

He overcommits a little centrally and this creates even more space for Salah once the ball is played over. As soon as the No11 is able to bring the ball down, he is one-vs-one with a full-back in the area with plenty of space.

That was likely the reasoning for Klopp’s decision to tweak Salah’s starting position. It created these kinds of opportunities.

The German tactician has changed other aspects of the team’s shape since then but he’s been married to the idea of having Salah occupy winger-like positions due to the one-vs-one situations it can create.

The open play touch map comparison highlights how negligible the difference is between Salah’s positioning is this season compared to last. He is averaging fewer touches on a per 90 basis in general but just 1.5 more touches on the right side of the final third.

That is not enough to justify his drop-off as a goal threat.

Salah went from averaging 4.5 shots per 90 minutes last season to averaging 2.8 in his appearances so far. A consequence of this is that his non-penalty expected goal numbers have dropped from 0.66 to 0.43 per 90.

The data does seem to suggest that this is all by design. Liverpool no longer need Salah to be the goalscorer, they are now instead looking for him to be the creator. Why? The answer is likely tied to the arrival of a 6-foot-2 shot-magnet named Darwin.

There is a finite number of efforts a team can have in a game. If you possess a player reliant on volume in the way Darwin is, it makes a lot of sense to structure the attack in a way to get the most out of him. It also helps to speed up the bedding in process.

Previously, the team was built around ensuring Salah could have the majority of efforts. Now, not so much.

In previous versions of Klopp-ball, Roberto Firmino would drop deep in the build-up as the facilitator to create space for the wide forwards to attack. That was the design.

One of the front three for Liverpool needs to be a creator for it to function properly.

Salah is now tasked with being the man to facilitate for Luis Diaz, Darwin and Jota.

He leads the way for chances created in the Premier League with 24 and his expected assists per 90 average of 0.26 is the highest of his Liverpool league career. As highlighted in his chances created map, he is getting the ball into high-value areas within the penalty box and he’s been doing this while Klopp has been without the injured Jota and Darwin due to suspension. With those two now back in contention, we might see more of these opportunities converted.

Klopp had to switch up the attack at Anfield at some point. Salah was the goalscoring success he was because he was paired with Mane and Firmino. The Reds haven’t replaced those two in a like-for-like manner, so it would have been naive to think nothing would change with Salah. They could have tried to make it work with square pegs in round holes but they have instead been proactive in their approach and willingly made the change.

Liverpool have recreated their famed front three in the aggregate.

Darwin is the new Salah in terms of volume and goal threat, Diaz is the new Mane – his numbers this season are eerily similar to those posted by the former No10 last term, and Salah is the new Firmino – the player tasked with making it all work.

The quality will no doubt differ, especially as players develop, but the profiles suggest this is the case. There will likely be some short-term pain but long-term it could be yet another success for the Reds.

What this potentially means for Salah is he will need to be judged somewhat differently from now on. He isn’t getting as many opportunities so we can’t expect him to be posting the same goal numbers. He should, however, still be a key cog in this Liverpool attack as the man creating chances galore for teammates.

He is still just as dangerous for Klopp’s side, just in a different way. Different can sometimes be better.

Story Behind The Numbers – Stephen Warnock