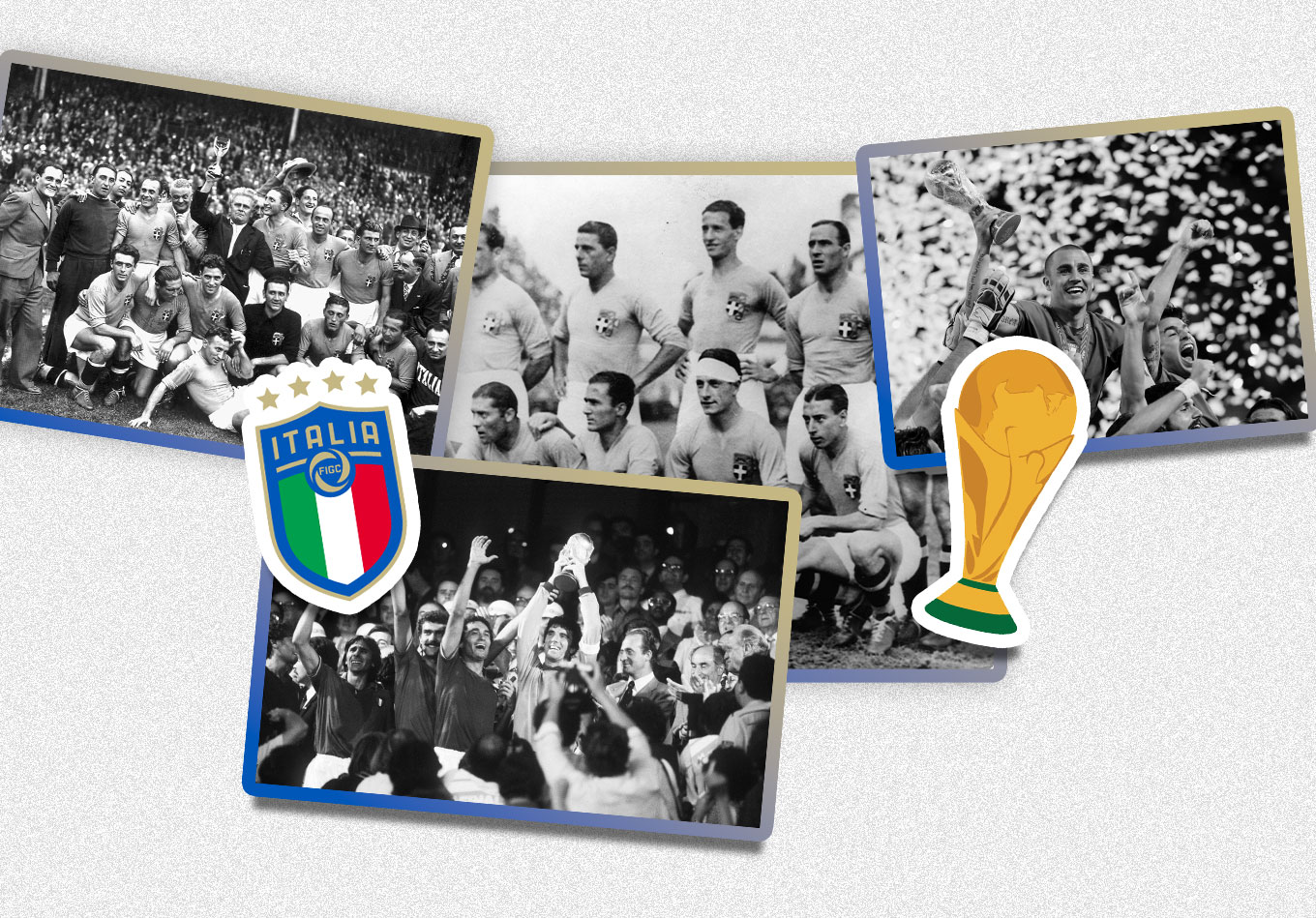 Only Brazil have won the World Cup more often than Italy. The Italian national team will be missing from the 2022 Qatar World Cup but their footballing heritage lives on. We look back here at how each of their four titles was secured.

The 1934 World Cup was the first to be held in Europe and it was awarded to Italy, who nonetheless had to qualify for their own tournament. 1930 World Cup champions Uruguay were missing, grumpy about the numerous European nations who didn’t make the long journey to South America four years earlier, while the UK home nations were still not members of FIFA, having resigned in 1928, so were also absent. Italian Prime Minister Benito Mussolini was very keen that his team win the competition on home soil and they held up their end of the bargain, beating Czechoslovakia 2-1 in the final.

A straight knockout tournament comprising a round of 16, quarter-finals, semis, a third place play-off and the final, the 1934 tournament holds the record of having the fewest number of games, 17, five of them involving Italy (their quarter-final against Spain was replayed the following day, and settled by a goal from Azzurri legend Giuseppe Meazza). Italy’s first game of the 1934 World Cup was a 7-1 thrashing of the United States, and their first ever World Cup game in 1934 remains the only time Italy have ever scored more than four goals in a match.

After defeating Spain 1-0 in the replay, Italy recorded the same score in the semi-final against Austria, with Austrian superstar Matthias Sindelar marked out of the game by Luis Monti, a player who had featured for Argentina in the 1930 World Cup but would find more success in Italian colours four years later. Later in 1934 Monti would only last a couple of minutes of the infamous Battle of Highbury against England after breaking a bone in his foot. The match, billed as the real World Cup final by the typically insular English saw the home side win 3-2, benefitting significantly from facing a team down to 10 men for nearly all of the game.

But whatever the English might claim, the 1934 World Champions were Italy, an honour they secured by beating Czechoslovakia 2-1 after extra time in viciously hot conditions in Rome. Europe had its first World Champions; four years later Italy would do it again.

Glory on the Precipice of War

Vittorio Pozzo is the only manager in the history of football to win two World Cups and the 1938 edition is the reason why. Italy became the first country to defend their world crown (only Brazil have done so since), and did so by once again navigating a 16-team knockout format that actually became 15 teams after Austria were forced to withdraw due to Anschluss. There were three replays this time around (someone invent penalty shootouts please) with Czechoslovakia getting past Netherlands and Cuba overcoming Romania in the last 16, while Brazil needed two attempts to get past Czechoslovakia in the quarter-finals. Germany, meanwhile, exited at the first stage, something that wouldn’t happen against at a World Cup until 2018.

Cuba’s reward for reaching the last eight was an 8-0 crushing by Sweden, and that game remains the only time in World Cup history that a team has let in eight or more goals in a quarter-final onwards. Italy needed extra time to get past Norway in their first game, before facing hosts France in the quarter-finals in Bordeaux. A goal for each side in the opening 10 mins set up a game that was settled by two second-half goals from legendary striker Silvio Piola. The hosts were out, the holders were through.

Italy defeated Brazil 2-1 in the semi-final to set up a final against Hungary in Paris. Piola scored two more goals, along with a brace from Gino Colaussi as Italy won 4-2 to retain the trophy. The second highest scoring World Cup in history, based on goals per game (4.67), Italy in 1938 remain one of only four teams to win every match they played at a World Cup. Having become world champions in 1934, Italy would now remain holders of the World Cup trophy until 1950 but for reasons of global war rather than anything they did on the pitch.

The 1982 World Cup is a hypercolour memory, a global jamboree conducted on red hot Spanish pitches with nations such as Brazil, West Germany and France fielding some of their greatest XIs. Yet at the end of the tournament it was unfancied Italy lifting the coveted trophy, ending a 44-year wait for a third title.

Start slow, win big seems to have been Italy’s method in 1982. The last World Cup to contain two group stages, Italy qualified from the first without winning a single game. They drew 0-0 with Poland, 1-1 with Peru and then 1-1 with Cameroon, qualifying ahead of the Africans on goals scored. Did anyone have the Italians as likely tournament winners at this stage? No, they did not.

Italy’s reward for progressing to the three-team second group was to be paired with South American giants Brazil and Argentina in what may well be the ultimate Group of Death. But, after failing to win any of their games against lesser opposition earlier in the tournament, Italy defeated Argentina 2-1 to set up a winner-take-all clash with Brazil after the Seleção also defeated Argentina, who saw a young and brooding Diego Maradona sent off in the closing stages.

The subsequent Italy vs. Brazil game has gone down in World Cup history as one of the competition’s greatest ever games and rightly so. Paolo Rossi gave Italy an early lead only to see Sócrates equalise. Rossi then made it 2-1 after 25 minutes only to see Falcão equalise in the second half. Rossi – who had served a ban for match fixing earlier in the decade – completed his hat-trick with 15 minutes to go to send Italy through and complete his redemption story.

Except Rossi wasn’t finished there. He scored both goals as Italy despatched erstwhile Group 1 opponents Poland in the semis and then scored another in the final as Italy cruised past West Germany by three goals to one. World Cup won, Golden Boot secured. Italy joined Brazil on three wins, but they would have to wait until the Brazilians were up to five before adding a fourth title.

If scandal had surrounded Paolo Rossi before the 1982 finals, then ahead of World Cup 2006 the whole of Italian football was in the dock. The Calciopoli scandal had just broken and some of Serie A’s biggest clubs were about to face severe sanctions, with Juventus set for relegation to Serie B. The country’s football fabric was coming apart so it was ironic that the World Cup saw players from across the country come together to provide the ultimate salve: a World Cup win.

The 2006 World Cup was one of the finest editions of the venerable competition. It saw Lionel Messi and Cristiano Ronaldo appear (and score) for the first time, and it contained brutally entertaining games such as the Battle of Nuremberg between Portugal and the Netherlands.

Italy were only sixth favourites coming into the tournament but cruised through the group stage with few problems, a pair of 2-0 wins against Ghana and the Czech Republic and a memorably bruising 1-1 draw with the United States. Australia in the Round of 16 looked simple enough but it took a Francesco Totti penalty in extra-time to get past the determined Socceroos. Totti would be one of the players of the World Cup, recording a tournament-high four assists to go along with that goal against Australia. Italy shared the goals around all tournament with 10 different players scoring, a World Cup record.

As the tournament reached its business end Italy were blessed with a quarter-final against an ineffectual Ukraine side (W3-0) which set up a semi-final against hosts Germany, who had grown into the tournament and were backed by an increasingly invested home crowd. What followed was one of the greatest games in World Cup history, even though it was still 0-0 with a penalty shootout only moments away. That was the cue for Italy to score not once but twice to send them to their first World Cup final since finishing as runners-up 1994.

That 1994 edition had ended with penalties and so did the 2006 final against France, although this time Italy were the team who came out on top in a match that will forever be remembered for Zinedine Zidane’s headbutt on Marco Materazzi, a scene of globally witnessed shuddering violence that followed the beauty of his audacious penalty in the seventh minute. Zidane’s absence in the shootout was felt, with Italy scoring all five of their penalties as France desperately played catch-up after David Trezeguet had missed their second. Fabio Grosso, the hero of the semi-final, scored the decisive kick for Italy as they became only the second team in history to be World Cup winners four or more times (something later matched by Germany). Winners of Euro 2020 (in 2021), Italy somehow messed up qualification for the 2022 World Cup and will be missing in Qatar but the nation’s overall World Cup pedigree simply cannot be questioned.