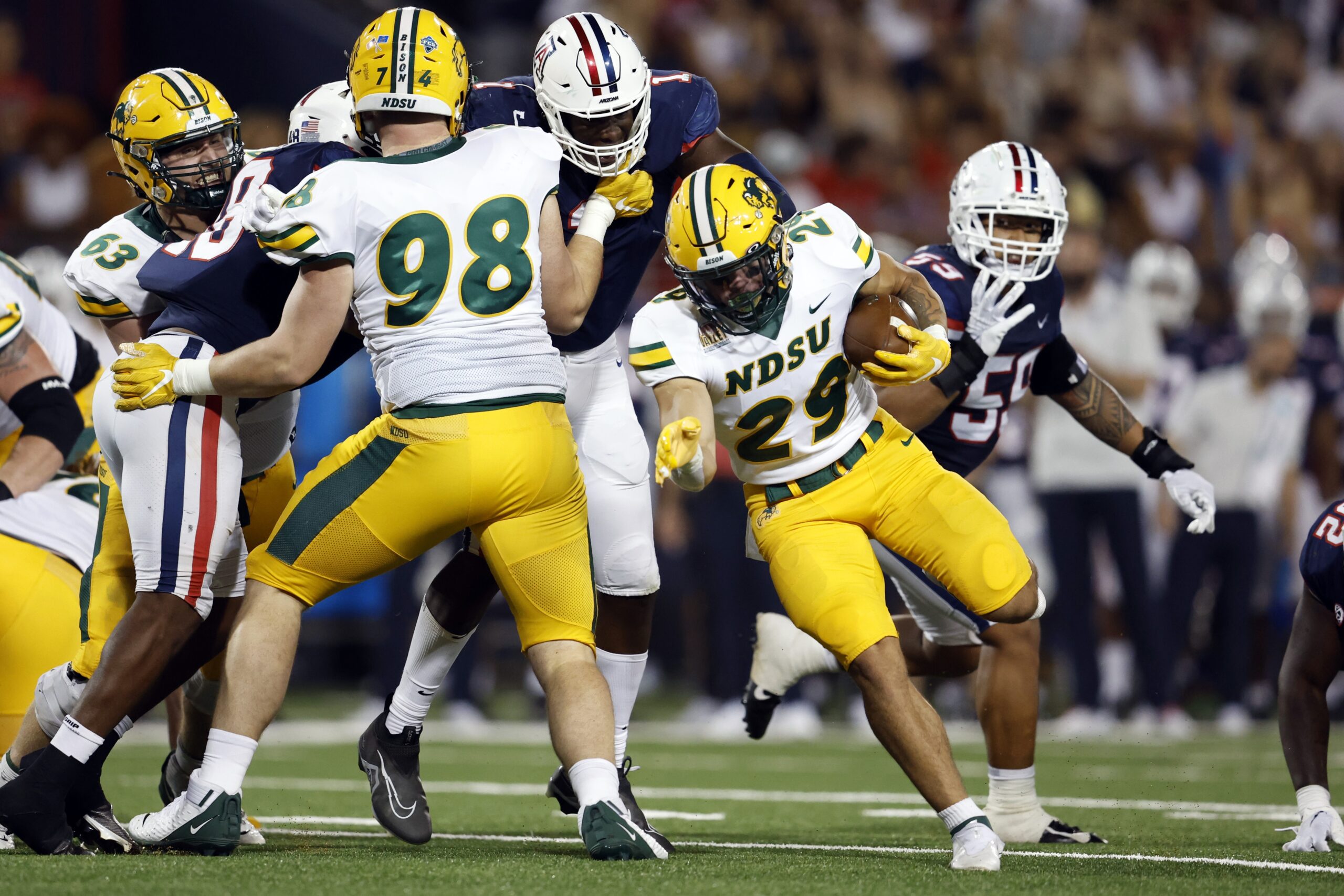 The longest winning streak by an FCS program against FBS opposition is over, but, fittingly, it received a proper ending when top-ranked North Dakota State fell 31-28 at Arizona Saturday night in Tucson.

The fabulous game had four lead changes in the second half, the last one occurring when Arizona erased a 28-24 deficit on Jayden de Laura’s 22-yard pass to wide receiver Jacob Cowling with 4:53 to go.

NDSU, playing an FBS opponent for the first time since 2016, still had a late chance to win before its winning streak against the upper tier of Division I football ended at six games. Five of the wins were against Power-Five conference teams.

Here are 10 takeaways from all of the Week 3 action:

NFL scouts must love how NDSU fullback Hunter Luepke steps up his production in big game. The Most Outstanding Player of the Bison’s 2021 FCS national championship game win over Montana State finished with 180 yards from scrimmage (115 rushing, 65 receiving) and scored three of the Bison’s four touchdowns.

The Bison were one of four top-seven teams in the Stats Perform FCS Top 25 to fall to FBS opponents on Saturday. Still, it appears unlikely they will drop from the No. 1 national ranking.

Southern Illinois coach Nick Hill was the Salukis’ quarterback when they posted their first win over a Big Ten opponent (Indiana) in 2006. Make it two wins now, and this time Hill coached the Salukis past Northwestern 31-24 – the seventh FCS victory against an FBS program this season, and the first over a Power-Five opponent. The Salukis allowed 98 points in losses to UIW and Southeast Missouri and were down two starting offensive linemen, but quarterback Nic Baker accounted for four touchdowns (three passing, one rushing) and the defense had four takeaways after not forcing a turnover in the first two games.

Stock Up: If you like Southern Illinois’ upset, then you have to really like Southeast Missouri’s 2-1 start because it includes the road win over the Salukis last weekend and now a 42-16 rout of a Nicholls program that has posted five straight winning seasons. Running back Geno Hess accounted for three touchdowns, including on two of Paxton DeLaurent’s three scoring passes, while inside linebacker Bryce Norman was in on a career-high 17 tackles. The Ohio Valley Conference program next hosts Central Arkansas in yet another big non-conference matchup.

Stock Down: The good news for Sacred Heart is it owns a Northeast Conference win over Central Connecticut State, but the bad news loom larger because the two-time defending champ is 1-2 and not playing as well as its recent teams. Adding in a 24-9 loss to Morgan State, the Pioneers have scored only 23 points and been over 250 offensive yards just once in three games. All-American Malik Grant has rushed for only 168 yards on 2.9 yards per carry and one touchdown.

N.C. Central Off to Best Start in D-I Era

Morgan State wasn’t the only MEAC squad to notch an eye-catching win. North Carolina Central improved to 3-0 for the first time in its Division I era (since 2008), surprising No. 25 New Hampshire with a 45-27 road victory in their first-ever meeting. Davius Richard’s 140 rushing yards doubled up his previous career best and were the most by an NCCU quarterback in 23 years, and he accounted for three TDs (two passing, one rushing). Khalil Baker secured his third interception of the season, and it was a 25-yard pick-six.

The Eagles, under coach Trei Oliver, have won six straight games since last season – now the longest active winning streak in the FCS.

Recent SoCon Champs Look to be in Trouble

The Southern Conference title race has had plenty of different contenders in recent seasons, and the last two champs, VMI (2020) or ETSU (2021), are both 1-2 and showing vulnerability. ETSU dropped its second consecutive conference game, 27-14 to Furman, whose All-America tight end Ryan Miller caught a touchdown pass in a sixth straight game since last season. VMI fell 28-22 to a Cornell squad that hasn’t posted a winning season since 2005. Preseason favorite Chattanooga, Mercer and Furman are all 1-0 in the SoCon.

The Big Sky needed the win after North Dakota quarterback Tommy Schuster took a reverse flea-flicker and threw a 23-yard TD pass to Jack Wright in the final minute of a 27-24 win at Northern Arizona. UND, a former Big Sky member, has collected wins in the Challenge for both conferences.

It’s odd to see a program with significant postseason success off to an 0-3 start. This season, it includes Northern Iowa, whose 22 playoff appearances are the second-most in FCS history; McNeese, which has 16 appearances; and North Carolina A&T, which captured the Celebration Bowl four times from 2015-19.

Still, an 0-3 team in the FCS can cling to the hope that not all is lost as far as qualifying for the playoffs because it’s happened with increased frequency in recent years. Lehigh earned the Patriot League’s automatic bid in 2017 after an 0-5 start, and Central Connecticut State (Northeast Conference automatic) and Furman (at-large) did that same year after losing their first three games. Missouri State lost three times in the fall of 2020 before rallying to qualify for the spring 2021 playoffs.

For the third consecutive week, there was only one matchup between two ranked teams in the Stats Perform FCS Top 25, and this time No. 9 Delaware handled No. 17 Rhode Island 42-21 in the CAA. Quarterback Nolan Henderson was close to a perfect first half, completing 22 of 25 passes for 315 yards (the most in a UD half since Matt Nagy in 1998) and four touchdowns. He finished 29 of 34, setting career highs for completions, passing yards (379), total offensive yards (406) and TD passes (four), and the Blue Hens, under new coach Ryan Carty, reached a 3-0 start for just the second time in the last 10 seasons (also the 2020 pandemic-delayed campaign that was played in spring 2021).

Fordham (3-0) will seek an FBS win at Ohio U. next Saturday behind the FCS’ hottest quarterback, Tim DeMorat. After a 48-45 win over Albany, the fifth-year senior have five or more touchdown passes in each of the Rams’ first three games. Since 1999, it had only been accomplished by Sam Houston’s Jeremiah Briscoe, who posted five straight outings in 2016. In that time, DeMorat is the first to do so in his team’s first three games. Overall, he has passed for 1,302 yards and 16 TDs against three interceptions. … Speaking of red-hot QBs, Jackson State sophomore Shedeur Sanders accounted for six touchdowns (four passing, two rushing) in a 66-21 win over Grambling State. He’s 80 of 108 (74.1 percent) for 956 yards and 10 TDs in the Tigers’ 3-0 start. … Second-ranked South Dakota State (2-1) rolled past Butler 45-17. Quarterback Mark Gronowski accounted for 334 yards of total offense and four touchdowns, while Butler did not run an offensive play in Jackrabbits territory until the second half. … Dayton (2-1) pounded Division II Kentucky State 46-3 in its home opener, hitting the scoring column for an NCAA-record 500th consecutive game. The milestone was reached on Dante Casciola’s five-yard touchdown pass to running back Jake Chisholm in the first quarter. … Richmond quarterback Reece Udinski completed his first 17 passes in finishing 36 of 43 for 351 yards and two TDs in a 30-6 win at Lehigh. … Texas Southern stopped Southern 24-0 for its first SWAC shutout since 2016. The defense had three interceptions and quarterback Andrew Body passed for two TDs. … Hampton (3-0) beat rival Norfolk State 17-7 in a defensive Battle of the Bay. Wide receiver Romon Copeland broke a 7-7 tie by scoring on a 75-yard reception on the Pirates’ first possession of the second half. … Idaho first-year coach Jason Eck collected his first career win as the Vandals topped Drake 42-14. … Western Carolina routed Presbyterian, 77-21, matching its program high for points and setting the record with 766 offensive yards. Starting quarterback Carlos Davis missed the game, but four other signal callers passed for TDs, including Cole Gonzales with three. … Austin Peay (3-1) has outscored three struggling FCS opponents (Presbyterian, Mississippi Valley State and Alabama A&M) by a combined 132-3. … After the Big South lost powers Kennesaw State and Monmouth this offseason, its teams are a combined 2-15. Campbell and Gardner-Webb own the wins. … Charleston Southern’s Sam Babbush connected from 57 yards in a loss against Eastern Kentucky – the season’s longest field goal to date.