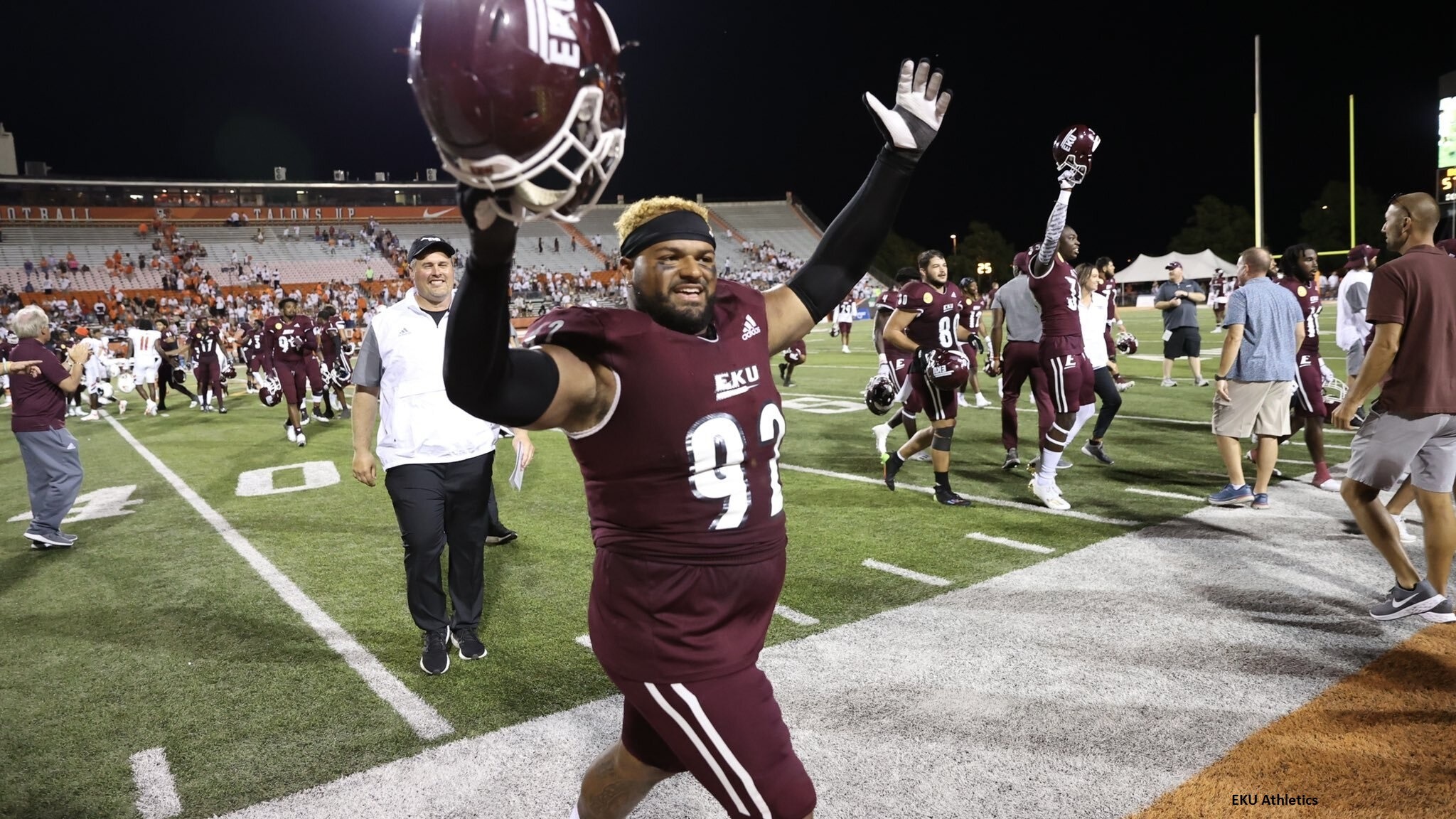 The NCAA pushing the FCS championship game back one more day in January surely suggests everybody wants the 2022 season to last as long as possible.

You never know what can happen on an FCS game day.

The early season momentum continued this weekend with Eastern Kentucky, Holy Cross, UIW and Weber State posting FCS wins over the FBS, and The Citadel providing a third straight week of a top-10 team (this time ETSU) falling to a fellow FCS program.

Here are 10 takeaways from the wild action:

Eastern Kentucky’s rich tradition includes two FCS championships and two other appearances in the national title game. Add the Colonels’ 59-57, seven-overtime win at FBS program Bowling Green to program lore. Parker McKinney’s touchdown pass and the subsequent PAT to end regulation forced overtime at 38-38. In the seventh OT, the Colonels forced an incompletion on defense, then McKinney swung a pass to running back Braedon Sloan, who dove past the pylon for the final two points.

The ASUN program’s first FBS win since 2014 marked the most OTs for an FCS program when facing a Division I opponent. However, Bethune-Cookman defeated D-II Virginia State in eight OTs on Sept. 26, 1998.

Holy Cross and UIW earned wins over FBS opponents for the second consecutive season. The early front-runner for play of the year is Holy Cross quarterback Matthew Sluka’s 46-yard “Hail Mary” to Jalen Coker on the final play of a 37-31 win at Buffalo. Two of Sluka’s three TD passes went to Coker and the junior quarterback had 146 rushing yards as part of his 386 yards of total offense.

UIW followed up its 64 points against Southern Illinois with a 55-41 win at Nevada. Lindsey Scott Jr. passed for 406 yards and four touchdowns, with wide receiver Darion Chafin (seven receptions for 246 yards and two TDs) unstoppable.

Surprise in the SoCon

The Citadel has the most overtime wins among FCS programs since the tie-breaking extra session was instituted for D-I regular-season games in 1996. Colby Kintner had other plans against defending Southern Conference champ ETSU, canceling the need for OT with a walk-off 39-yard field goal and a 20-17 upset.

The Bulldogs, who were only 4-7 last season, began the final drive at their 3. Their triple option offense held an 18-minute, 24-second edge in time of possession.

Stock Up: After ending the Sean McDonnell coaching era at New Hampshire with a stunning eight-game losing streak, the Wildcats are 2-0 under Rick Santos and atop the CAA standings, adding a 28-23 road win over UAlbany to an opening triumph over Monmouth. Dylan Laube carried the ball 32 times for 202 yards and three TDs – all career highs – against the Great Danes.

Stock Down: Wofford has suffered back-to-back shutout losses – 31-0 to Chattanooga and 26-0 to Elon – for the first time since 1984. Dating to last season, the Terriers have dropped 12 straight games, which is unfathomable for a program that won three straight Southern Conference titles from 2017-19. They could be headed toward a head coaching change if Josh Conklin doesn’t turn around the fortunes soon.

Jackson State coach Deion Sanders says his program intends to pull out of the Southern Heritage Classic, so his 13th-ranked squad made a final statement with a 16-3 triumph over Tennessee State, which went from having 547 offensive yards against Eastern Washington to just 140 against the Tigers. However, the defending SWAC champion played without prized freshman safety Travis Hunter, who was sidelined by injury.

Attendance at the Liberty Bowl in Memphis was announced as 51,351.

The HBCUs were in the spotlight even if the scores weren’t positive. North Carolina A&T fell at top-ranked North Dakota State 43-3, and Alabama State became UCLA’s first-ever FCS opponent, losing 45-7.

North Dakota Makes it an Even (Three) Dozen

A team doesn’t win 36 straight home openers without scheduling its share of cupcakes, but North Dakota reached three dozen the hard way, edging No. 24 Northern Iowa 29-27 in the first MVFC game for both teams. Tommy Schuster completed 20 of 23 passes for 275 yards and two touchdowns with one interception, adding one rushing touchdown and a two-point conversion.

The four teams involved in the first two Big Sky-MVFC Challenge games were 2021 playoff squads. This year’s six-game event is tied at one win apiece after No. 3 Montana (Big Sky) dropped South Dakota 24-7 and No. 2 South Dakota State (MVFC) held on to beat UC Davis 24-22.

SDSU (1-1), which didn’t allow a touchdown in a 7-3 loss at Iowa, needed three TDs from quarterback Mark Gronowski to avoid an upset.

Weber State’s defense was outstanding in a 35-7 win at Utah State – the Wildcats’ first over an FBS opponent since 1993. The ‘Cats picked off four passes, limited Utah State to 2 of 15 on third downs and didn’t allow the Aggies an offensive touchdown. … What a way for Lindenwood to debut as an FCS program: The Ohio Valley Conference member escaped Houston Baptist with a 21-20 win after Jalen Bethany blocked a punt and Andrew Martin recovered it in the Huskies’ end zone for the go-ahead score with 28 seconds left. … Southeast Missouri’s 34-31 win at Southern Illinois in the “War For the Wheel” had nine lead changes, the last occurring on Paxton DeLaurent’s game-winning, 2-yard TD pass (his fourth of the game) to Damoriea Vick with 11 seconds to go. … Demeatric Crawford’s five TD passes powered Youngstown State (2-0) past Dayton 49-16. In the loss, the Flyers made it 499 consecutive games with points – an all-divisions record. They’ll go for the milestone against Kentucky State next Saturday. … In a coast-to-coast turnaround, Colgate went from falling at Stanford in Week 1 to beating Maine 21-18 up in Orono. Quarterback Michael Bresci had three rushing TDs, including a 68-yarder, and linebacker Tyler Flick made a career-high 15 tackles. … Austin Peay (2-1) has posted back-to-back shutouts – Presbyterian 63-0 and Mississippi Valley State 41-0 – for the first time since 1964. … Samford managed only 128 offensive yards in being shut out 33-0 at defending FBS national champion Georgia. … Delaware State’s Jonathan Cardoza-Chicas matched the school record with a 54-yard field goal to give the Hornets a 3-0 first-quarter lead at Delaware. It lasted for 4:05 in a 35-9 loss, basically three times as long as the mere 1:40 they were in front in 10 previous losses in the series. Nolan Henderson had three TD passes in the Blue Hens’ win. … Jacksonville State, which is in its final FCS season, became the first 3-0 team, winning 34-3 at Murray State. Sam Houston, which is also FBS-bound, fell 10-3 at home to Northern Arizona. … Eastern Washington’s potent offense was held to 87 passing yards and 187 total offensive yards in a 70-14 loss at Oregon. Gunner Talkington had two TD passes in defeat. … No. 4 Montana State’s top four running backs have sustained injuries: Isaiah Ifanse, Lane Sumner, Kaegun Williams and Jared White. … Two players had three interceptions: William & Mary’s Jalen Jones against Campbell (including a pick-six) and LIU’s Victor Nelson Jr. against Villanova.